10 of the best beaches in Dorset

No Dorset camping holiday is complete without a trip to the beach. Whether it's for sunbathing or beach combing, Dorset's historic stretch of seafront is home to some of the very best beaches in England and on a sunny day there are few spots we'd rather be. Perhaps most famously, Dorset's coastline includes most of the historic Jurassic Coast, stretching from Studland Bay all the way into East Devon, making it a treasure trove for fossil hunters. Ultimately, however, this vast coastline has something for every type of beach-goer and, to help you find the beach that's right for you, we've put together a list of some of our very favourite spots... With its seven miles of golden sands Bournemouth Beach is a definite crowd favourite. The beach’s long promenade makes it very popular, but it is also its vast size that makes it great for families (and also for its growing surf community!). During summer, the beaches are raked over by tractors every morning and litter pickers clear the beach of rubbish twice a day. Bournemouth has consistently received Blue Flag status, recognising the beach's high standards of management and water quality, and it's the only seafront in the country to receive a silver standard award from the Green Tourism Business Scheme. In terms of things to do, Bournemouth beach has plenty on offer. The pier theatre was renovated in 2014 to include Rock Reef Activity Centre, which has rock-climbing walls, ropes course, cave-themed tunnels and a zipline that leads down to the shore. 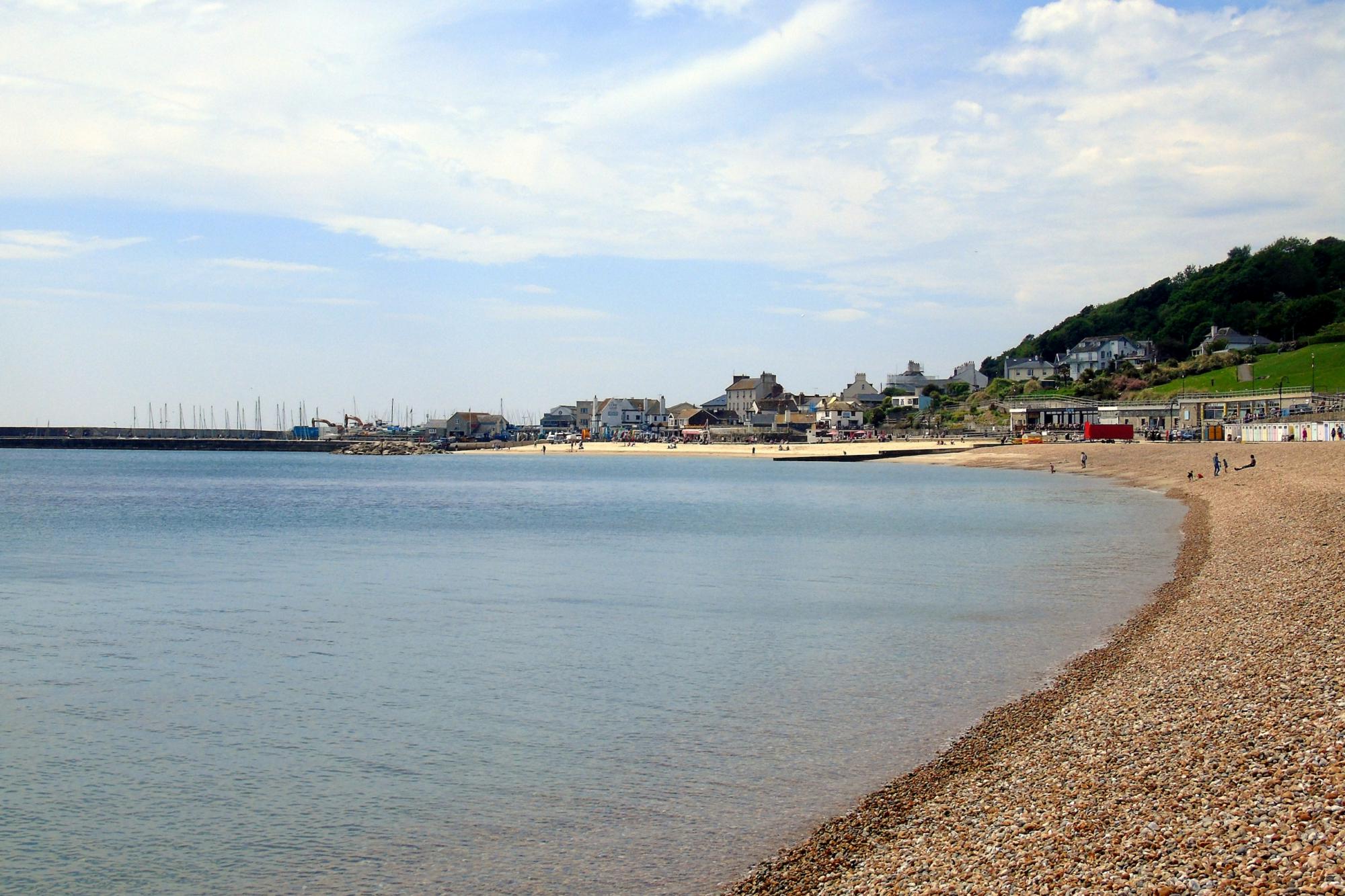 Lyme Regis is a sand and pebble beach, famous for its fossil hunting activities. It is the birth place of Mary Anning, the famous fossil collector who found her first full Plesiosaurus skeleton in 1823. Today, the Lyme Regis Museum is built on the site of Anning’s birthplace and their expert geologists run regular fossil hunting walks. You're likely to find either belemnites, gryphea, sea urchins or, if you're really lucky, you could discover a larger ichthyosaurs or plesiosaurs! Lyme Regis also hosts a popular Fossil Festival, a family-friendly event that runs every May bank holiday. The beach is also famous for its iconic ‘Cobb Wall’, a stone harbour wall well known for its appearance in literature and film. The cove also provides cover from the elements, making it a safe sheltered beach for families. Like most of the other beaches on this list, Lyme Regis has a gently sloping bay that allows easy access for small children. There are a number of watersports activities available such as kayaking, canoeing, snorkelling and diving. When the tides go out, rock pools teaming with life appear for adults and kids alike to explore. 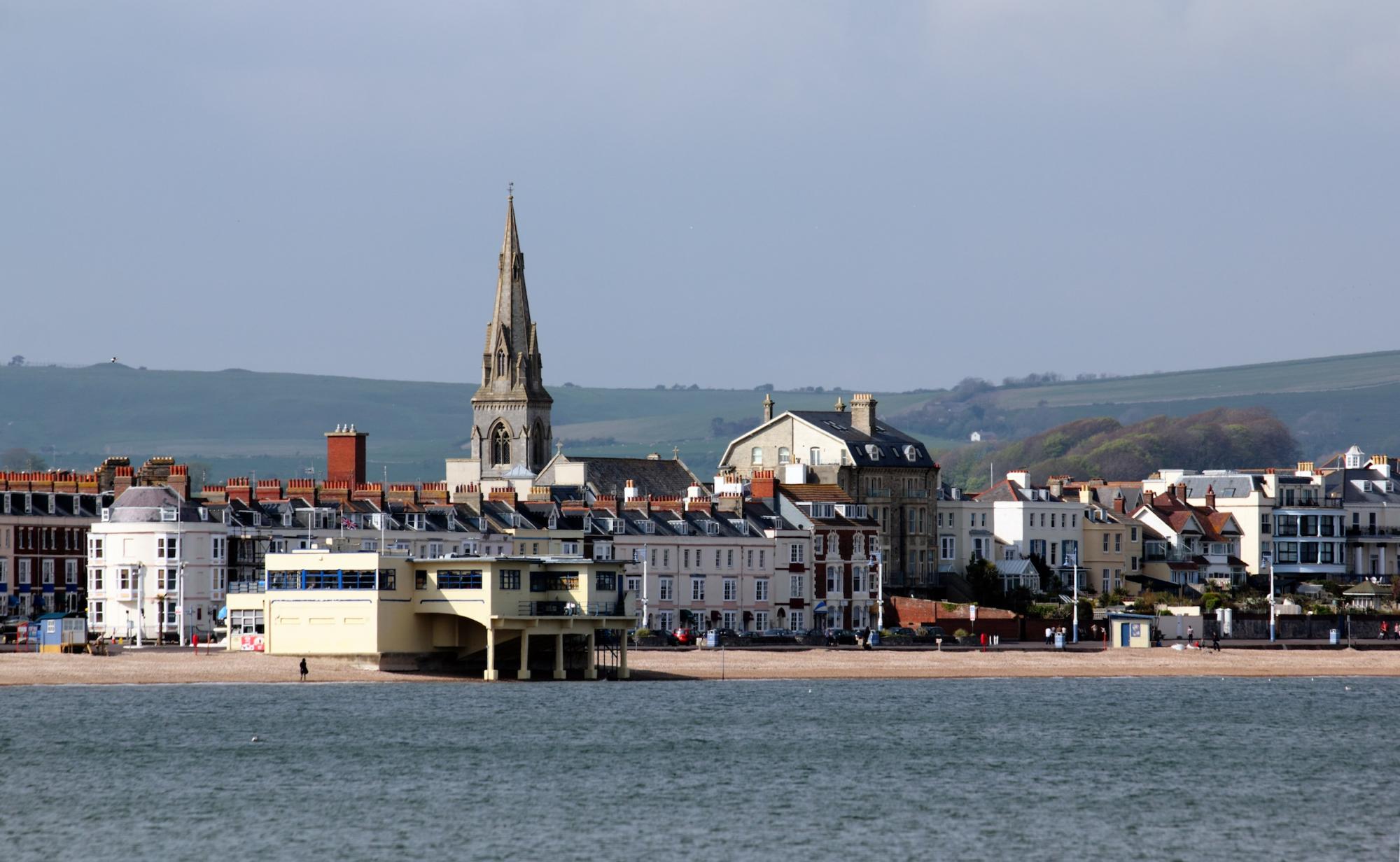 Weymouth Beach first became a popular destination in the 1700’s after King George III’s frequent visits. This beach is particularly quaint with rows of Victorian houses lining the shores. The Victorian wooden sea side rides show the attempt to maintain a sense of consistency and an appreciation for the past in the beaches design. Other activitities include Punch and Judy, donkey rides, pedalos, waterzorbing and a mini golf and arcade area. There are also a number of events, such as festivals or sporting championships, which take place throughout the year. This beach has its own dog-friendly area for pet owners, as well as a designated family area. However, if you’re looking to escape the crowds, head in the direction of Lodmoor Nature Reserve, where the paths become quieter. Despite the beaches popularity, restaurants and shops are fairly inexpensive. Like many beaches, Weymouth is known, by day, for its fantastic fish-and-chip shops and ice cream parlours, while, at night, lazer displays light up the beach, perfect for an evening stroll. 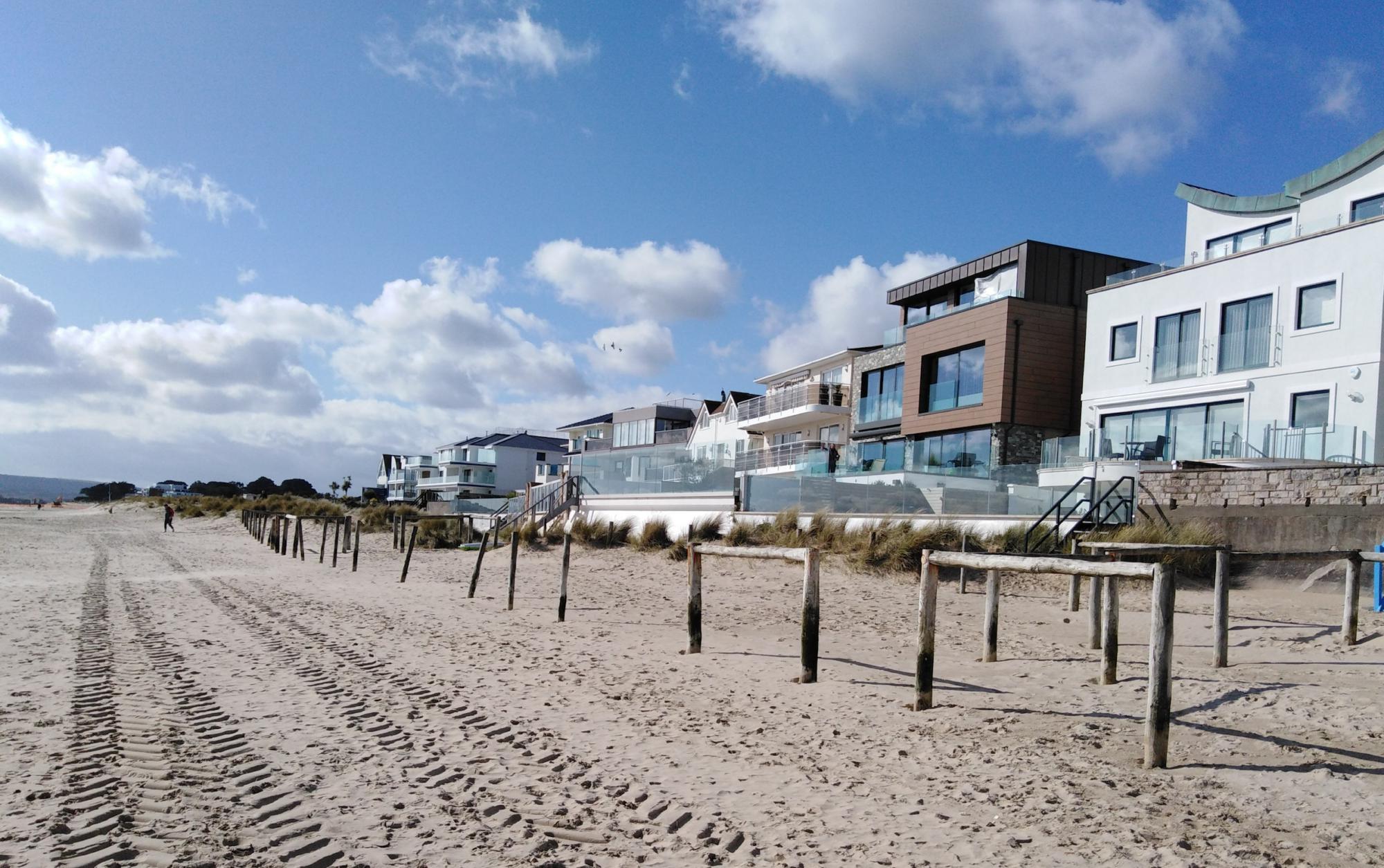 Sandbank beach boasts some great facilities such as a large crazy-golf course, a childrens’ play area with climbing, swings and sand diggers, plus a mini road train that gives rides along the seafront. Watersports and equipment are available to hire such as kayaks and jet-skis, as well as slackline, volleyball nets and table tennis. On the western side of the peninsula, areas have been specially designed for swimming, BBQs and dog walking. Sandbanks has held the well-respected Blue Flag award for the past 30 years. The beach offers outstanding views of Studland and Old Harry Rocks and on clear days you can even spot the Isle of Wight. A must for many who visit Sandbanks beach, is the Sandbanks Chain Ferry. Running since 1926, this service allows visitors to cut down the long journey time to places such as Corfe Castle, making more time for sightseeing! This UNESCO World Heritage Site is renowned for its unique geology. The melting ice at the end of the last Ice Age combined with the forces of the sea have resulted in some amazing rock features, including the bending seams of Lulworth Crumple and Stair Hole and the world-famous arch of Durdle Door. The cove itself is well sheltered, acting as a form of natural protection. This is a white pebble beach, with plenty of rock pools for adventuring at low tide. There is also a large car park at the Visitor Centre, with toilets and a nice café. It’s worth checking out the food scene in Lulworth too, as there are a number of highly commended restaurants within walking distance of the cove. Dogs are permitted on this beach but must stay on the left of the slipway. 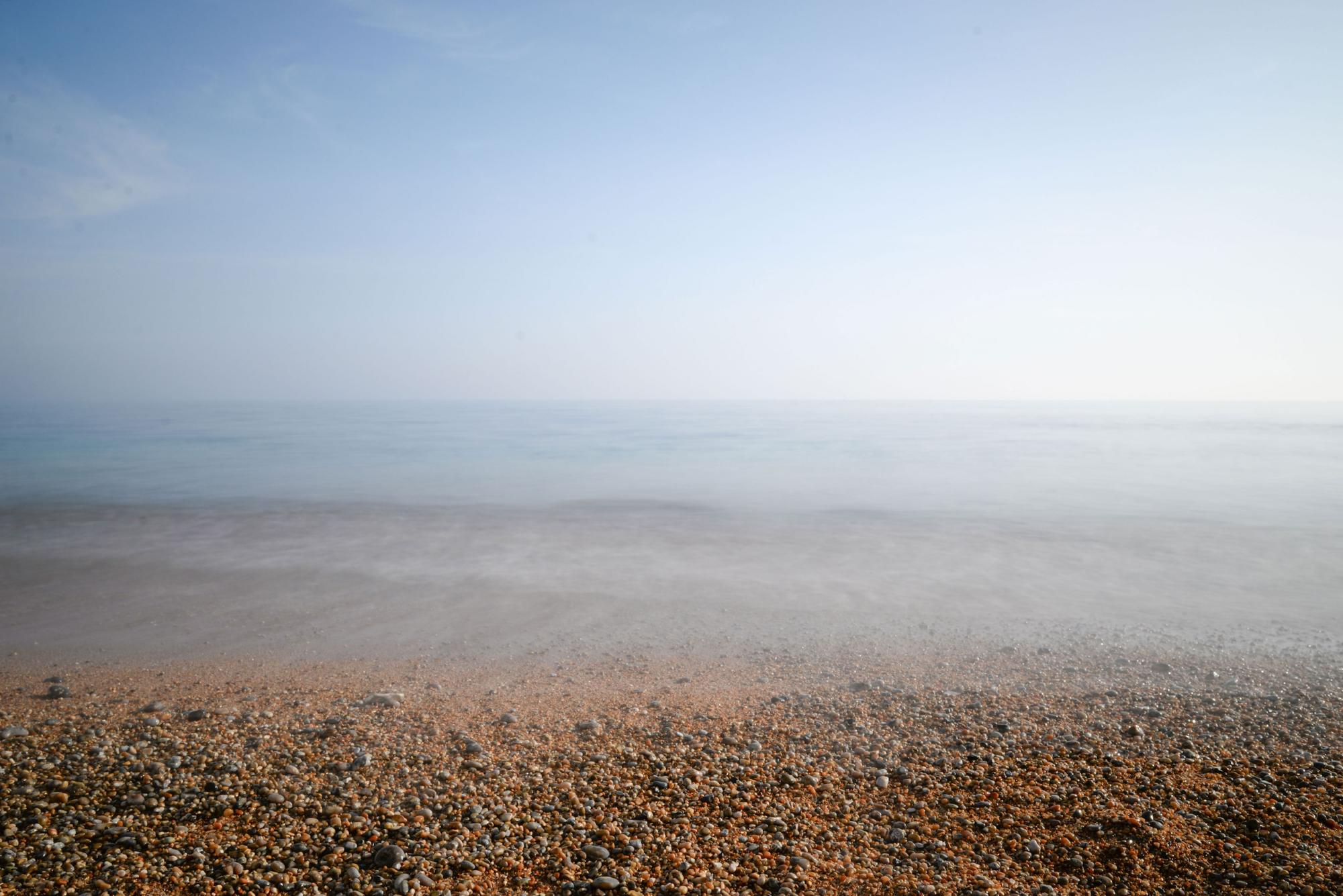 "It is above all an elemental place, made of sea, shingle and sky, its dominant sound always that of waves moving on stone: from the great surf …to the delicate laps and back gurgling of the rare dead calm.” – A quote by John Fowles that sums up Chesil Beach perfectly, he is just one of many authors who have been inspired by its beautiful stoney length. This shingle barrier beach is 18 miles long and has it own wild and weathered beauty – you wont see any of the usual attractive beach huts or attractions here. If you’re interested in fishing, head to West Bexington, a fantastic location for catching mackerel. This area gets busy during the summer months with anglers and their families cooking their latest catch on the banks. The Fleet Lagoon, an SSSI, is one of the only undisturbed saltwater lagoons in the world and is located directly behind Chesil beach. You can explore the lagoon on the Fleet Explorer, a boat specially built to reach the lower depths of the lagoon, or head to the Visitor Centre to learn more about Chesil’s wildlife. West Beach has achieved the highest award for sea water quality from the Good Beach Guide. This is a smaller pebble and shingle beach, well suited to families. It is located between the Jurassic Pier and the Esplanades rock armour groyne, forming a sheltered cove. This means it is well protected and shallow enough for paddling. You may have noticed this beach featured on ITV’s drama, Broadchurch. It’s also worth knowing that there is a ramp onto West Beach for disabled access, just at the junction between the esplanade and the promenade. The Jurassic Pier also has good wheelchair access and plenty of seating, after its renovation in 2004. For things to do, hire a rowing boat available at the shore or take one of the fishing boats trips out from the harbour. Palmers Brewery is not a long distance from the beach and, as the only thatched brewery in England, it should be worth a visit. Kimmeridge Bay is located within a marine conservation area and boasts some of the most accessible marine wildlife. The Wild Seas Centre is free entry and has a number of exhibitions about the Jurrasic Coast and its wildlife, as well as a small aquarium. They also run a variety of events through the year. In the summer they encourage visitors to swim the snorkel trail over the colourful marine life in the shallow bay waters. They also offer eco- friendly crabbing or a rockpool ramble. The bay claims to have the best snorkelling and rockpooling in Dorset. There is also very little tide here, making it great for beginners. Clavell Tower is a steep walk up from the beach but offers fantastic views across the bay. In summer, there is usually an ice cream van on the beach but there are no other shops or restaurants, so make sure to bring snacks with you or head to Kimmeridge village for a variety of pubs and food options. 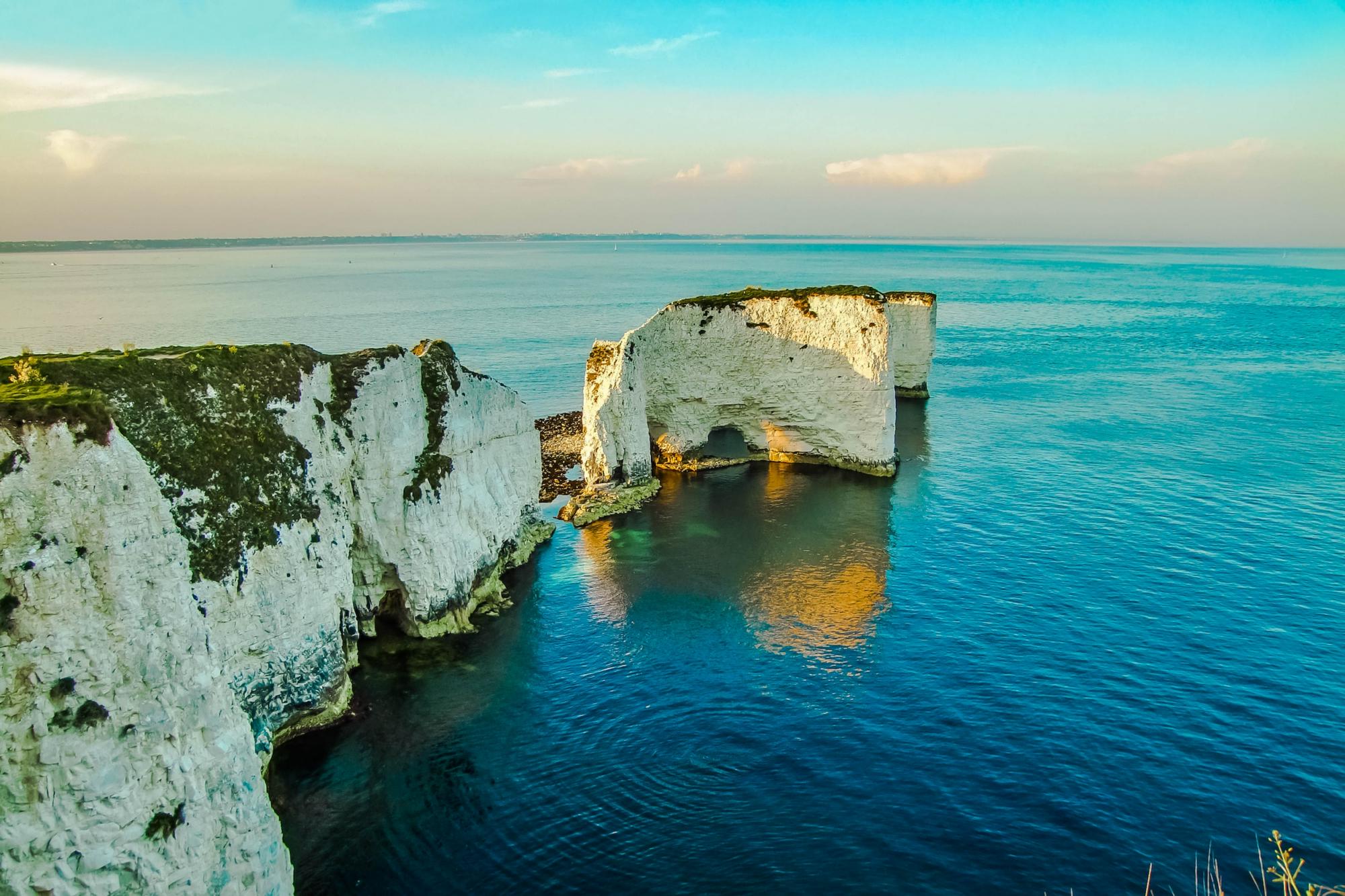 Studland beach comprises of three miles of golden sand and heathland, a haven for rare birds and native wildlife. The beach includes two national nature reserves which are home to all six British reptiles. Following the designated trails through the sand dunes, you might notice insects, birdlife or even a deer. Studland is also home to the National Trust's only designated naturist beach area in the UK. There is plenty of parking available here, with the four National Trust car parks accommodating over 2,500 cars. However, it’s worth noting there is not a designated dog-friendly area on this beach and dogs can only be walked on the beach in the winter season. Worbarrow Bay is around a 20 minute walk from Tyneham Village. The village has been deserted since 1943 when it was evacuated and taken over by the Ministry of Defence. It is a fantastic example of life during WW2, with some buildings still intact as though frozen in time. There are also exhibitions about the village and its old inhabitants that are open from 10am–4pm. The closest parking available is in Tyneham, so the only way to access the beach is to walk. Although the bay is quite a walk away, it is a fairly flat and easy stroll, and there are plenty of interesting sights, such as the firing practise and old tanks. The long walk can also mean the beach is often wonderfully quiet and a lovely place to be at one with nature. The bay is part of the Lulworth Army Ranges, meaning it can usually only be accessed on the weekends because it is often used for training exercises. Worbarrow Tout, the headland at the east of the bay, is home to fossilised dinosaur footprints and other smaller fossils. The beach offers outstanding views bordered by the striking chalk cliffs. This beach is dog-friendly all year round. However, there are no facilities here and the nearest toilets are in Tykenham so make sure you are well prepared for your visit.


Browse all campsites in Dorset