With donkey rides on the beach, safe sandy shallows and a bustling town packed with shops and eateries, Weymouth is a perfect spot for a family camping holiday by the sea. The fact that it’s in glorious Dorset, with its world-famous Jurassic Coast and fertile rolling countryside, makes Weymouth yet more attractive. There are some incredible campsites in and around Weymouth and we’ve brought together the best of them for this collection. The only trouble is deciding which one to stay at… 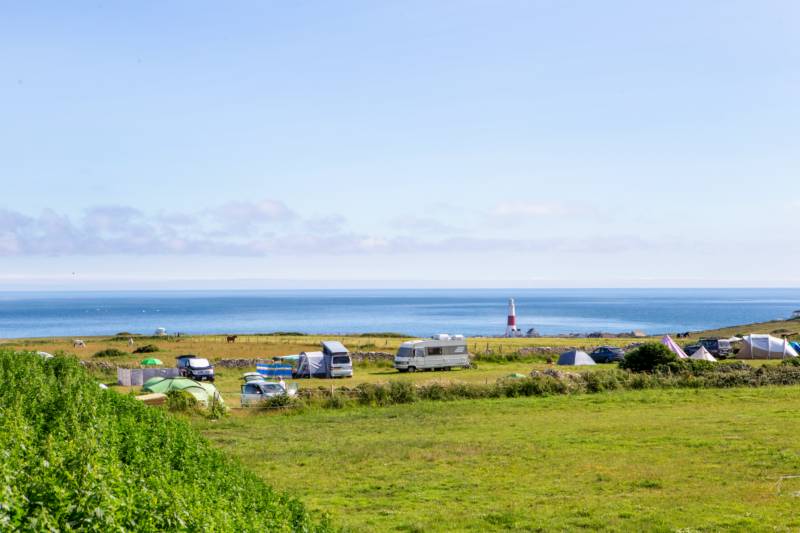 Camping and glamping in Weymouth

Weymouth sits slap-bang in the middle of Dorset’s stunning coastline and makes a great base for a camping or glamping holiday. Its long sandy beach offers everything you could ask for from a classic seaside holiday with donkey rides, deck chairs and Punch and Judy shows. But it’s location also means that you’re well placed to explore the rest of the county’s treasures too. With cute villages, grand estates and wildlife hotspots in its rolling countryside and beaches, coves and cliffs along its UNESCO-protected Jurassic Coast, there’s something for everyone here. It’s easy to see why it’s a popular place to holiday and there are plenty of classic campsites in and around Weymouth but only the best get a thumbs-up from the Cool Camping experts. Many of them have locations on rural farms, many have sea views and, thankfully for those who can’t decide between the two, lots of them offer an incredible combination of both. Is it any surprise that some of the Cool Camping team’s favourite campsites can be found in this area? And we haven’t even started on the glamping opportunities in this south-west, seaside town. Dorset embraces glampers with open arms offering everything from bell tents, yurts and tipis to treehouses, shepherd’s huts and gypsy wagons. If you fancy a holiday in the great outdoors but don’t want the faff of pitching a tent, glamping in Weymouth offers the best of both worlds.

Things to do in Weymouth

There are plenty of things to do in Weymouth during a camping or glamping holiday starting, of course, with the seaside. Camp near the coast and you could easily spend your weekend, week or whole summer, splashing around on the beach. The main esplanade-backed beach at Weymouth is sandy with safe shallows for swimming. It’s also where you’ll find donkey rides and Punch and Judy shows in the summer along with the opportunity to hire paddleboards and kayaks. The sheltered Newton and Castle Coves are good for rockpooling and, on the opposite side of the peninsula, is Chesil Beach. Eight miles of this 18-mile beach is a narrow shingle bank which separates The Fleet lagoon from the sea. It’s a distinctive part of the UNESCO World Heritage Listed Jurassic Coast – which includes 95 miles of the coast in Dorset, excepting built-up areas like Weymouth itself. To appreciate the rock formations and fossils that secured the designation and showcase 185 million years of history, head 30 minutes in either direction to visit Durdle Door or Charmouth and Lyme Regis. For walking on the coast, follow the South West Coast Path, which follows the coast for 630 miles from Poole in Dorset around Devon and Cornwall to Minehead on the Somerset coast.

There are plenty of attractions within Weymouth from the modern Jurassic Coast Skyline viewing tower, Sealife Adventure Park, cinema and bowling alley to the historic Nothe Fort. Lightly tethered to the mainland at Weymouth’s southernmost point is the Isle of Portland where you can visit Henry VIII’s Portland Castle and the iconic Portland Bill lighthouse. At the far end of the Chesil shingle bank is the Abbotsbury Swannery, the only managed colony of mute swans in the world. A 20-minute drive inland gets you to the heart of Hardy country – where you can appreciate the scenery that inspired Thomas Hardy’s Far From The Madding Crowd and visit his former home, now managed by the National Trust. For more information on things to do in and around Weymouth check out the Visit Dorset website.