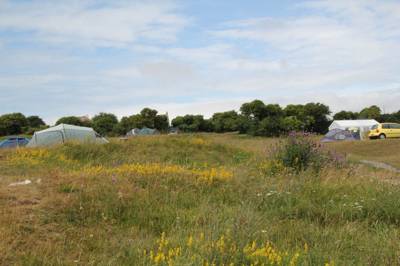 Five great things to do in Dorset this summer

Famous for its blue seas, quiet sandy coves and its wandering inland hills, along with bucketfuls of rural tradition and history, Dorset is one of the UK's most popular camping and glamping destinations. Along the coast, rugged cliffs and fascinating rock formations provide an intriguing backdrop for walking, while inland paths and cycle trails allow you to romp across the best of the sheep-dotted countryside, too. This month, along with our usual collection of the best campsites in Dorset and Dorset's fines glamping sites, we're also taking a look at what's good to see and do in the area. So whether you're after a touch of history or a good place to have a picnic, this handful of suggestions is a good place to start...

The beaches of Dorset are nothing short of iconic in the UK. Bournemouth is perhaps the most well-known spot, but the Jurassic Coast is the real must-see. This 95-mile long stretch of coast between Exmouth in East Devon and Studland Bay in Dorset, dates back over 180 million years and is now a recognised natural World Heritage Site. Sights along the coastal footpath include Old Harry Rocks, stacks and stumpy rocks that protrude off the coast, with dolphins often spotted beneath in the spring, and the Golden Cap cliffs, where views stretch for miles on a clear day. All routes allow for some fossil hunting of prehistoric remains, with organised fossil hunting walks also available. Sturdy walking shoes are recommended, but along with long rambles there are plenty of shorter routes on offer.

Step Back in Time at Maiden Castle

Maiden Castle, the remains of a hillfort settled on a windy, steep hill, connects you with England’s past and creates an almost eerie, desolate and ancient aura, despite being located just minutes from the closest city. The walk is fairly steep, but well worth the climb, particularly for the rewarding views (best accompanied by an afternoon picnic). If you want to experience the beauty of Maiden Castle for longer than a day, there a plenty of campsites nearby – Rosewall is the closest. Parking at Maiden Castle is free.

Lyme Regis was so beloved and beautifully described by Jane Austen in Persuasion that any one with a nose for a novel should be heading straight for the town. Why not take the literary Lyme Walk trail to find out more? Built up around the picturesque harbour, Lyme Regis still retains a wonderfully creative community today, with plenty of independent shops where you can browse arts, crafts and local goods. Perhaps Lyme’s most iconic image is that of the hooded Meryl Streep staring moodily out to sea from The Cobb, in the film The French Lieutenant’s Woman – indeed on a windy winter’s day, it’s hard to resist the temptation to recreate that atmospheric scene. Most days, however, The Cobb, a curving harbour wall dating from the 13th century, is packed with children running away from crashing waves or fishing from the walls and families out for a stroll. At the bottom of The Cobb, a line of blackboards advertise boat and fishing trips, which leave from the harbour below – on a fine day, you can simply turn up and choose the next trip going out.

The limestone arch of Durdle Door is a true wonder of the Dorset coast. If you’re lucky enough to visit on a summer’s day, when the water is fresh and clear, you can even take a dip and swim right up to the arch. Durdle Door is a must-see for those interested in photography, the shape of the arch alone can be beautifully captured. To get here, take the well-signed footpath from Lulworth Cove, a steep 20-minute walk that involves a precipitous final ascent down stairs cut into the cliff. Once down, you can relax on the lovely single and sand beach.

Challenge your taste buds at the Nettle Eating Championships

Why not spice up your camping trip by attending the stinging nettle eating championships in Bridport, West Dorset. Taking place at the Bottle Inn every July, competitors have an hour to eat as many feet of stinging nettle stalks as possible. If you don't have the mettle, go along for the fun of spectating!