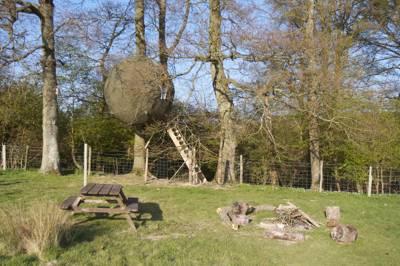 Glamping branches out with the Tree Tent

As a kid, I always wanted a tree house, but never had one. The lack of any suitably-sized trees in our modest suburban garden may have been a factor. So I’ve been living with a treehouse-shaped hole in my life for many years. But now, it turns out that hole isn’t bird-box-shaped, as I’d always thought. It’s the shape of a giant gobstopper.

The Tree Tent is a contemporary re-invention of the traditional treehouse, the most visually obvious differences being that the new version is perfectly spherical, and that it’s a khaki canvas ‘tent’ rather than a wooden ‘house’. The orb-shaped pod is suspended from the trees and is accessed via a wooden staircase; it all looks remarkably sci-fi, this strange-looking semi-camouflaged globe hovering amongst the trees, as if a UFO had crash-landed into the foliage. You half-expect a blue-faced Martian with springy antennae to pop his head out of the oval window to ask for directions.

Tree Tent designer Jason Thawley has neither a blue face or antennae, although he could be described as being from another planet, as he is full of crazy ideas. “The idea of sleeping up amongst the trees has always fascinated me,” says Jason, “but the design of the tree tent is inspired more by the structure and fabric of yurts and tipis than the old idea of a rickety wooden treehouses that every boy wanted.” (Oh, right, so it wasn’t just me.)

"We’ve applied modern techniques to some of the principles used in traditional nomadic structures, but the design is supposed to be fun too. It gets a great reaction from people when they see the tent hanging from a tree for the first time.”

It certainly looks fun and intriguing from the outside – but it feels completely practical inside. Two eye-shaped beds are set into the curve of the wall at either side of the room, both plenty wide enough in the middle, but tapering to a point for the head and feet. This thoughtful use of space makes the pod feel really quite roomy between the beds. There’s also enough space for a table and a wood-burning stove. Each bed has a window beside it and there’s a circular skylight in the centre of the roof – a design idea borrowed from traditional yurts – so the tent has plenty of light flooding in, and campers can enjoy close-up views of the trees all around. Lying in bed, staring up at the birds flitting from branch to branch, you feel very much part of the canopy, a feeling accentuated by the very light movement of the tent as the trees sway in the wind. The movement is soothing rather than disconcerting, but it’s still good to know that it’s all secured firmly by hi-tech fibre ropes, which are apparently stronger than steel wire.

The insulation is hi-tech too, a thick layer of modern, breathable insulating material mixed with re-cycled clothing, all woven together by expert quilt-makers in Lancashire. With this ultramodern fabric and a shiny steel central pole to which the wooden shell and outer wrap is attached, it all looks very futuristic, as if NASA have taken up designing tents. Cocooned inside with the windows shut, you might imagine you’re floating high above the earth in a space station, rather than just a few metres off the ground.

Overall, the tree tent is a cosy, comfortable, playful place to stay, and something refreshingly different in a glamping market dominated my me-too tipis. Designer Thawley is already fielding enquiries from campsite owners and private buyers across the UK.

However secure those ropes may be, this tree tent is certain to take off.

Jonathan Knight stayed in a Tree Tent at The Secret Campsite in Sussex. £95/night for 2 people (2 single beds).