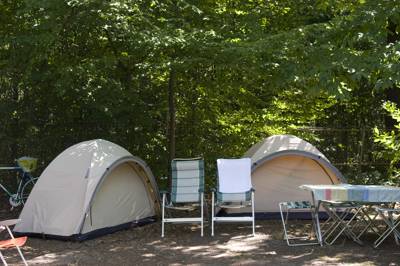 Fancy a big city break but don’t have the budget? Want urban buzz by day but rural peace by night? No, we’re not joking, here are six spectacular city campsites…

It may not seem like the most likely combination but sometimes nothing pairs more perfectly with a lively city break than a couple of nights camping out amid the countryside. Sometimes, though, this private patch of pitches may be much nearer than you realize! Looking for campsites near Edinburgh or pitches in Paris? We take a look at six of the best city campsites so you can still get your camping or glamping fix even when visiting the big smoke!

Developed into a fringe of woodland, Huttopia Versailles defies its urban location, but just 20 minutes from the Eiffel Tower and with the Palace of Versailles even closer – an easy 3 km walk – there’s no denying its Parisian credentials. Tent pitches are open and nestled at the very rear of the camp, behind the ‘huts’ that give the site its name, while mature trees shade much of the area (leaving the rooted ground, in places, a little lumpy). Sanitary facilities are still excellent (one shower block even has a log-burning stove inside) and there’s a restaurant and swimming pool.

As ‘internazionale’ as the name suggests, campers here arrive to more national flags than in the Olympic athletes’ village. The result is a slight euro-camp vibe, with a selection of chalets, a restaurant, well-stocked shop and, down the hill, a lively bar. Yet for all its quirks, the tent area is still largely separate from the crowds – an inviting, broad terrace of grassy pitches. Though you can’t see downtown Florence from the site, pitch on one side and you’ll have views of the convent of San Paulo, on the other and there’s the church of Certosa. The site’s a 20-minute, €1.20, bus ride from the city centre and once there, every attraction is within easy walking distance.

The inventors of ‘urban glamping’, Hüttenpalast (translating as 'Hut Palace'), treads a rather fine but admittedly very stylish line between camping and boutique hotel. Housed inside a former vacuum cleaner factory in central Berlin, this is glamping like you’ve never seen before. The site is within walking distance from key attractions like the Brandenburg Gate and Checkpoint Charlie, while within it features fake grass, fairy-lit silver birch trees and an inspired collection of refurbished vintage caravans, finished with spectacular attention to detail. Each caravan ‘room’ sleeps two, there are modern bathroom facilities and alongside is a hugely popular restaurant – though step into the streets for plenty more choices.

Perhaps it’s true that the Firth of Forth generally marks the end of Edinburgh and once you’re beyond the airport you’ve crossed the city boundary. Nevertheless, we’re claiming this one. Over the Forth Bridge but still just half an hour’s drive from the city centre, Gimme Shelter is the perfect fringe beyond the Edinburgh fringe. The woodland campsite has a wonderful hidden feel and gives a sense of semi-wilderness enclosed from the outer world, alongside ingenuously recycled facilities and a chilled-out, campfire-friendly atmosphere. If you’re looking for true contrast between urban and rural with speedy access between the two then this is surely it.

The Cool Camping website may not spread as far as Hungary yet but that doesn’t mean we’ve not already been exploring! In the eastern side of Budapest city centre, Camping Haller really is a capital campsite. It’s bordered by high wicker walls, screening out the urban bustle, and has a rather thin, sandy covering of grass welcoming tents, campervans and caravans. Facilities are good, though nothing to write home about, but that’s hardly the point. The nearest metro station is a 10-minute walk down the road and there’s a tramline about 100 metres away. This really is camping in the city.

If you were ever to pick a city where a campsite is an impossibility Venice would probably be it. If your chosen patch is not a tourist-packed bridge or a towering ancient building, then it's water, gondolas and more water. Sadly, it’s sort of true, but that doesn’t mean you have to travel far. Hop from St Marks Square onto the regularly running ferry and its just 40 minutes across the island dotted lagoon to Camping Ca’Savio, fronted by a sandy beach and boasting a staggering 800 pitches. Though it’s a veritable village in size, the site has some fantastic glamping options and the constant screening of trees creates a far smaller feel.