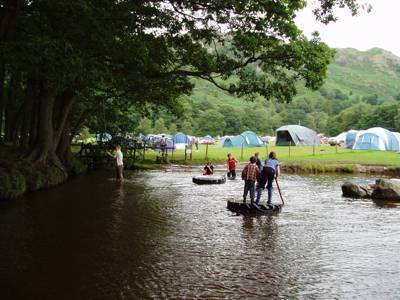 Part of the reason why kids love to go camping so much is because it feels like one long party!

Away from all the techno intrusions into almost all areas of our lives, camping encourages a high degree of parent–child interaction. Put bluntly, you can’t escape to the living room to read the Sunday papers, or to your office to check your emails and update your Facebook profile.

Chances are that you’ll find yourself playing the sort of ridiculous, hilarious and sometimes occasionally humiliating games that you were always desperate for your parents to play with you when you were a child.

There’s always plenty of room in every camping trip for the usual ball games such as rounders or French cricket, so don’t forget to fling bats, balls and rackets – and anything else that you think might be useful – into the boot of your car when you are packing. However, for wet weather (which is bound to happen), when you are confined under canvas, board games and playing cards are worth their weight in gold. But there’s also something delightful about homemade games that are just plucked out of the ether.

What follows is a selection of some of our favourite games. They don’t involve a single piece of kit, but they do involve a lot of fun.

Choose a single category, such as animals, girls’ names, sweets or food.The first player calls out a single item from that category, and the next player has to use the last letter of that word to make the first letter of the next word. For example, if you choose animals, a round might go like this: horse, elephant, tiger, rhinoceros. You can make the game more complicated for older children, if you like, using more challenging categories, such as rivers or foreign cities. You might even find that you can trick a teenager into doing some geography revision, without him or her even realising it! This is also a good game to play on long car journeys, particularly when you are driving to a far-flung campsite.

This is a brilliant game to while away an afternoon on the beach. First, agree on a search area around your site, tent or beach-base. Then devise a list of possible treasures that each child has to go and hunt for. For example, the list could include a bottle top, a feather, a piece of sea- smoothed glass, a completely round stone, and so on. Provide each child with a bucket (or an old yogurt pot or similar container) to carry their treasures in and send them off to hunt for them, while you stretch out with a good book. For the game to last longer, make the items a bit harder to find, like a stone with a hole in it, a starfish or a crab’s claw.The winner is the one who has collected the most treasures after an agreed period of time.

Choose an open space, but ideally one with some natural hiding places. The best place is in a wood, or on sand dunes. One person is made ‘king’/‘queen’, and must stand in the middle of the space beside the ‘can’. This could be an old bucket or a stump of wood.The king/queen covers their face, counts to 25 and all the players must then hide. The aim is for the players to get close enough to the can to kick it. The king/ queen must defend the can (now with eyes uncovered) and try to get a player out by tagging him. Once players are out they wait by the can in ‘prison’. The other players then try to free the prisoners by kicking the can without being tagged. The game usually involves some high- speed chases to the can, and a lot of cheering.

A good game for a wet afternoon, when you’ve visited every local castle there is and all anyone wants to do is sit in the tent. Rip up a sheet of paper into as many pieces as there are players. On one piece write the word ‘murderer’. Fold the pieces and put them into a hat. Each person (sitting in a circle) takes a piece and checks whether they are the murderer, without letting anyone else see. The murderer then winks surreptitiously at each player, who will then ‘die’. The murdered one counts to 10 before dying so that others can’t guess who the murderer is. High drama and histrionics are fully permitted from the dying player at this point. The aim of the game is for the murderer to wink each player out without anyone guessing who the murderer is.

This works best with a large group of people, but even if you are in a small group it’s still a lot of fun. If you want you can mark out a start and finish line with a biodegradable line of flour, but you could just do it with things you have lying around on site, like a skipping rope, a spare guy rope or an anorak. Use your imagination when choosing the sort of heats that you want to have: fiercely competitive running races are a good place to start, but you could quickly graduate to the three-legged race, hopping race, running- backwards race, egg-and-spoon race and the favourite wheelbarrow race. You could race as teams or individually. Close your sports day with a grand presentation of prizes, maybe in the form of chocolates and sweets.

Mark out a small circle on the ground using flour or a rope (or mark the sand with a stick). Choose one player to be the ‘witch’. She (orhe) crouches in the circle while the other players walk around it. The witch then slowly rises and, on reaching full height, shouts ‘Here I come!’ She then dashes out and tries to catch another player. Anyone she catches is turned into something of her choice, for example, a dog or a toad and the player has to freeze in that pose. The whole thing is then repeated until all the players have been caught by the witch and she is surrounded by a field full of strange-looking people contorted into silly shapes. Great fun and loads of hilarity!