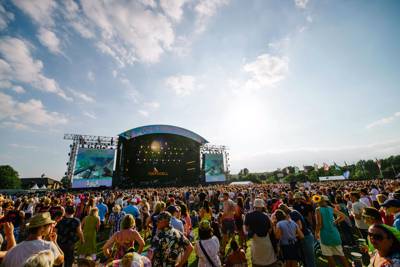 The Isle of Wight Festival - Review

Cool Camping hopped on a ferry with 50,000 other festival-goers to find out where the party’s at…

The early days of the Isle of Wight Festival are legendary. In the late 60’s and early 70’s around 800,000 hippies descended on the well-heeled, popular retirement destination eager to ‘freak out’ to live performances from The Who, Bob Dylan and Jimi Hendrix. Vast numbers of gate-crashers caused such mayhem that it was in fact the locals ‘freaking out’ and large events were banned on the island for the next 32 years. However, as Dylan himself famously proclaimed, “The Times They Are a-Changin” and todays festival - with just two large stages and a civilised curfew – is a more well-organised, easy-going affair, making it an ideal camping destination for festival rookies, families and older groups of revellers.

Less rocky than Reading or Leeds, yet not as poppy as V, this year's wide-ranging line up certainly didn’t neglect the dancing-dad demographic. Classic acts from yesteryear included The Specials, The Move and The Waterboys, whilst Suede and Travis belted out ‘of-the-era’ 90's anthems, like Beautiful Ones and Why Does It Always Rain On Me? On opening night, partying parents retreated to the safety of the back as the younger generation began throwing shapes (and plastic bottles) to Mercury Prize nominated drum’n’bass four-piece Rudimental, whilst electro-pop favourite Calvin Harris followed with a spectacular show of flashy visuals and pyrotechnics. The Scottish theme continued with headliners Biffy Clyro putting in an energy-filled, hit laden performance under the setting Isle of Wight sun.

Saturday night posed a viewing dilemma for all football fans - the Red Hot Chili Peppers or the England vs Italy match on the big-screen? Decisions decisions. We elected for the former, and any fears of regret were quickly banished as age-defying front-man Anthony Kiedis launched into Can’t Stop, Californication and By The Way, all woven together with funky instrumental jams. Closing the festivities on Sunday were the Kings of Leon. From raucous early single Molly’s Chamber to more recent ‘arena-friendly’ Use Somebody, the Tennessee rockers 23-song set seemed to lack thier usual energy and bite. Inevitably it was the finale, Sex on Fire, that most enthused the crowd as Seaclose Park turned into a 50,000 person beer-soaked karaoke.

Away from the stages there was fun to be had on Strawberry Fields and Penny Lane, two grass stretches of funfair rides, food stalls and quirky performance areas for aspiring headliners. Proving a hit was Life’s a Beach, a palm-tree lined area with sand sculptures, eyebrow-singeing fire shows and live acts that kept campers jammin' through the night, including the island's very own Caribbean crooner, Derek Sandy. The more affluent attendees enjoyed the sparkling sunshine and fancy cocktails at the Zebra Bar & Champagne Garden, whilst the little ones busied themselves with puppet theatre, circus skills and face painting at the fun-fuelled Kids Zone.

Of course, camping is an essential part of the festival experience and if you've never camped at a festival before, then the 'standard' campsite may be a challenging place to start - it's jam-packed, boisterous and fairly chaotic. Let's face it, huge queues for the single-sex showers and some pretty filthy portaloos are not confined to the Isle of Wight Festival, but at least here you are permitted to cook on the site, on gas stoves & disposable BBQs. Canvas campers wanting to avoid battling with an unfamiliar tent were found in the separate Tangerine Fields area. Billed as “every festival-goer's dream”, guests arrived to find a 2 or 4 man tent already pitched and ready to go. Fantastic.

But perhaps where the Isle of Wight Festival excels is in the number of glamping options available. Yurts and tipi’s could be rented; but worth a special mention are Podpads and their quirky alternatives to the traditional tent. The cute and colourfully adorned ‘Luxpads’ are lockable, plywood structures kitted out with hand-built beds, foam mattresses, storage space, lighting and electricity, adding a touch of comfort to your festival experience. These creature comforts do come at a price (pods start at £495 for the weekend), however this extremely welcoming set-up also offers peace of mind with 24-hour security, superior toilet & shower facilities (with loo roll & hand soap!), but best of all, a shorter walk to all the action and entertainment. And after a long, calf-straining day on your flip-flops, the short stroll home feels like money well spent.

With such an eclectic mix of performers, decent weather and impressive variety of accommodation, the Isle of Wight Festival 2014 has undoubtedly been a triumph. With such a well-organised, vibrant event, weary festival fans are guaranteed to take home some lifelong memories, and perhaps a sore head. If the rest of summer is anything like the legendary Isle of Wight Festival, it’ll be a good one…

for more information and to book your podpad click here