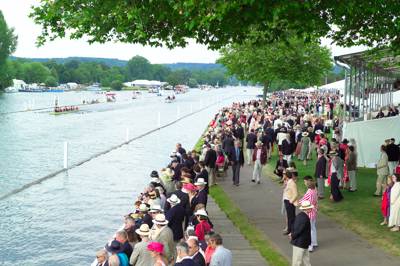 Henley Regatta may have a reputation for pomp, Pimm's and plummy voices, but the reality is that this summer social on the river can be a much more down-to-earth affair. You can even pitch your tent at a pop-up campsite right next to the regatta site, perfectly placed to enjoy all the fun and festivities. So leave behind your blazers, boaters and sensible hemlines, pack your tent and a picnic, and enjoy some messing around on the river this summer.

First held in 1839, the regatta has run annually ever since, featuring teams of amateur rowers battling it out along the mile-plus course on the meandering Thames. In the run-up to race week you'll notice some distinct changes in the town; tents and grandstands pop up along the river, regatta menus appear outside every eatery and the average height of the town's population increases by a good foot, as teams of strapping university rowers descend on Henley from all over the world.

From Wednesday 2nd July, spectators can watch five days of rowing action, culminating in the final races on the Sunday. The viewing points include the highly formal members-only Leander Club (home club to rowing royalty like Matthew Pinsent and James Cracknell), the Stewards' Enclosure (jackets and ties for the men, over-the-knee dresses for the ladies) and various other tickets-only areas. But plenty of visitors just grab a spot on the river bank to follow the action and enjoy some serious people-watching.

Part of the Thames remains open to the public and there are various options available to get on the river, from chartering your own boat, to river cruises (try Hobbs of Henley). Advance booking is essential, but be warned – you won't get anywhere in a hurry as river traffic levels reach M25 proportions.

Of course, to a large number of regatta visitors, rowing comes a distant second to the much more important business of eating, drinking and making merry. Choices range from high-end dining such as Mossimann's River Restaurant and Champagne Bar, to refuelling at the Food Court, with beer and Pimm's tents aplenty. A pop-up of exclusive chichi nightspot Chinawhite is the go-to place for late night cocktails.

As the Henley Regatta ends for another year, it moves aside for the Henley Festival (Wednesday 9th - Sunday 13th July 2014). Making use of the regatta facilities and grandstands, this arts and music festival features a floating stage, some of the biggest names in music and comedy, pop-up restaurants, sculpture, street theatre and late night parties. The festival ends with a bang each evening courtesy of a spectacular fireworks display. This year's headline acts include Bryan Ferry, Joss Stone and The Jacksons. But Glastonbury this ain't; swap shorts and t-shirts for black tie and evening dresses... although, weather-depending, wellies may still be required!

For anyone wanting to miss the traffic jams or the heaving train into town, pitch up your tent at Glebe Camping, Temple Island Meadows. Pitch-up here for a head start on other regatta-goers in finding a sought after spot on the river bank. Pack your picnic rug and get set for the day. The WOW bell and pillow tents give you the option of camping in style. Each tent sleeps up to six and comes with air beds, lighting and side table – you just decide whether to bring your own bedding. Glebe Camping is open throughout Henley Regatta and again from 10th - 12th July for festival-goers.

There's no shortage of eating and drinking options at the regatta site but, if you're ready for a change of scene, head into town. Try The Three Tuns for good quality restaurant food in a charming town-centre pub, The Giggling Squid with delicious Thai tapas and a buzzing atmosphere, or a curry feast at Cafe Le Raj. For post-race drinks The Little Angel is close to the regatta enclosures and always attracts a large, exuberant crowd. For a decent pint, and to escape the crowds completely, seek out The Bird in Hand pub on Greys Road, a tiny local pub which is virtually unaffected by the raucous goings-on at the river.

If you're coming by car allow plenty of time as queues into the town can be nightmarishly long.

The partying usually starts (and ends) on one of the regular train services from London and the West (additional services run during the Henley Regatta). Visit First Great Western Trains for timetables.

For more information about places to stay in and around Henley, as well as places to eat and what to do, check out the Cool Places guide to Thames Valley and the Chilterns.