The Mediterranean’s sparkling waters may tempt holidaymakers from all over Europe in summer but, for a spot of truly Cool Camping, sometimes west is best. It’s wilder, less visited and, for the most part, less developed than the bustling Med. It has vast sandy beaches in the south and a stunning rocky coastline in the north. Buffeted by Atlantic waves, it’s a great place for watersports and sailing with inland lagoons and sheltered coves provide safe swimming. The Mediterranean coastline is dominated by the type of large-scale holiday parks we try to steer clear of, so our south of France options tend to be a little further inland. But on the west coast, we’ve found some fantastic campsites that are just steps away from the sand. Here are some of our favourites… 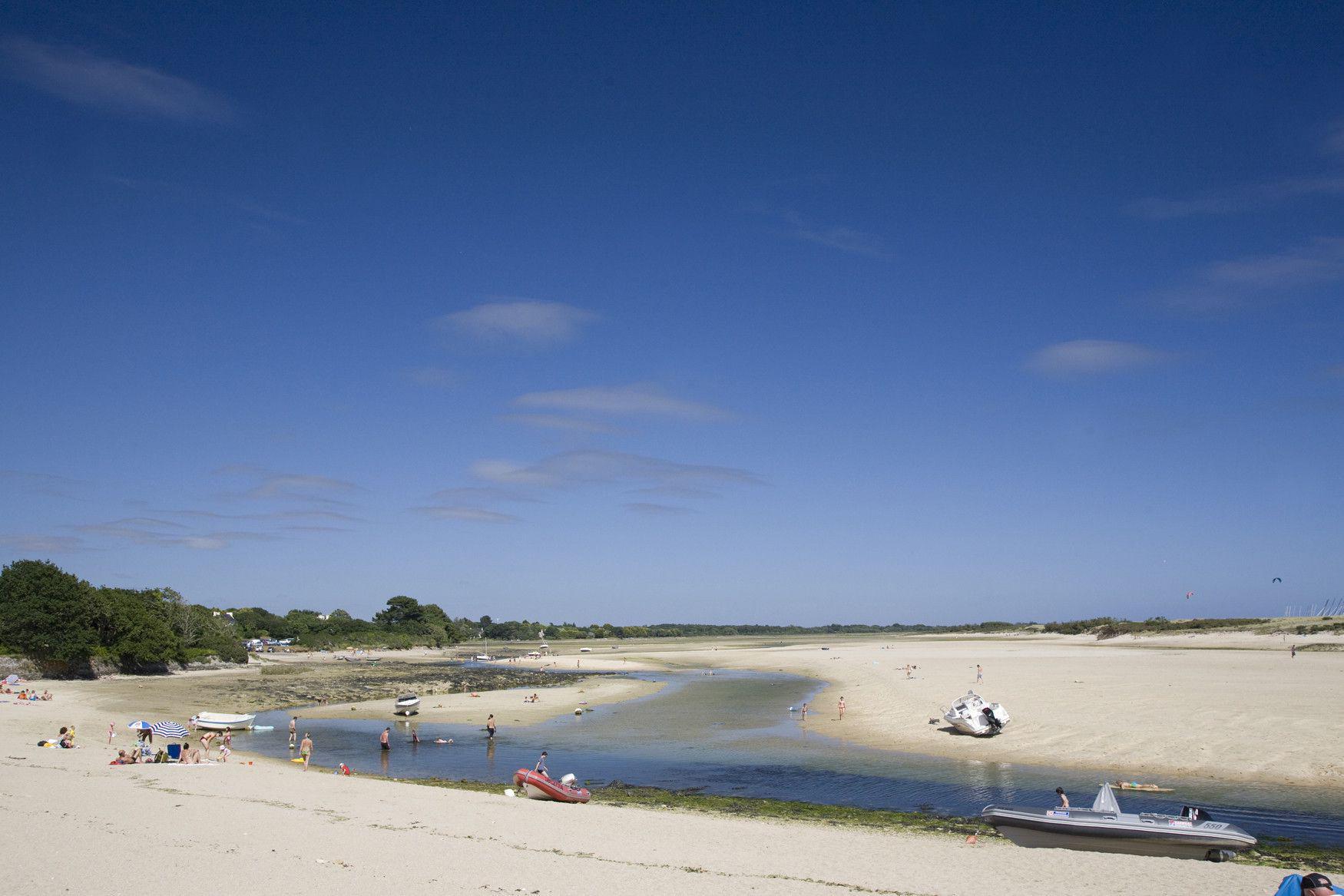 You can’t get much closer to the coast that Camping du Letty. You can run straight across the sand from sea to shower here. And while the site is admittedly large with a whopping 600 pitches, it is also a family-run affair. With mature trees and hedges around pitches, it doesn’t feel as cram-em-in cosy as the more commercial sites – despite the presence of a kids’ club, swimming pool, mini market and gym. If you’re looking for a quiet getaway, this site may not be for you in the height of the summer season, but if you want activities and a beachside location, it doesn’t get much better. 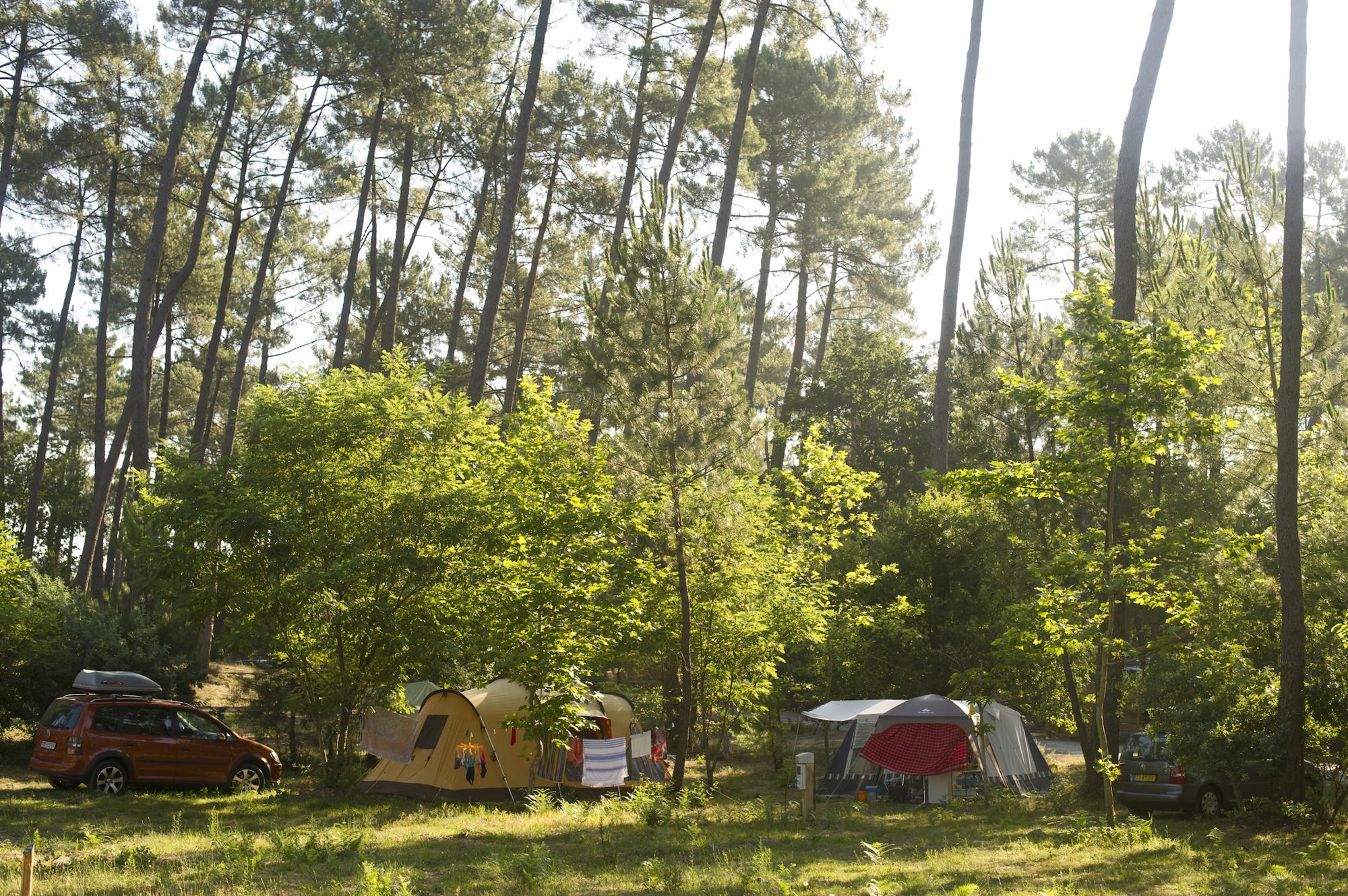 There’s no denying that Huttopia Landes Sud is on the large side with more than 200 pitches for tents, caravans and motorhomes. While we usually favour smaller, independent sites, we’ve been won over by the Huttopia brand as they make efforts to blend in with their natural surroundings and offer both great glamping and spacious pitches. Huttopia Landes Sud is a few miles inland but still has that classic French combo of sand underfoot and pines overhead with the added bonus of a riverside location. You can hire bikes and pedal to the beach or get your kayak out and paddle there. It’s a modern campsite with facilities to match including a swimming pool, volleyball court and pétanque. 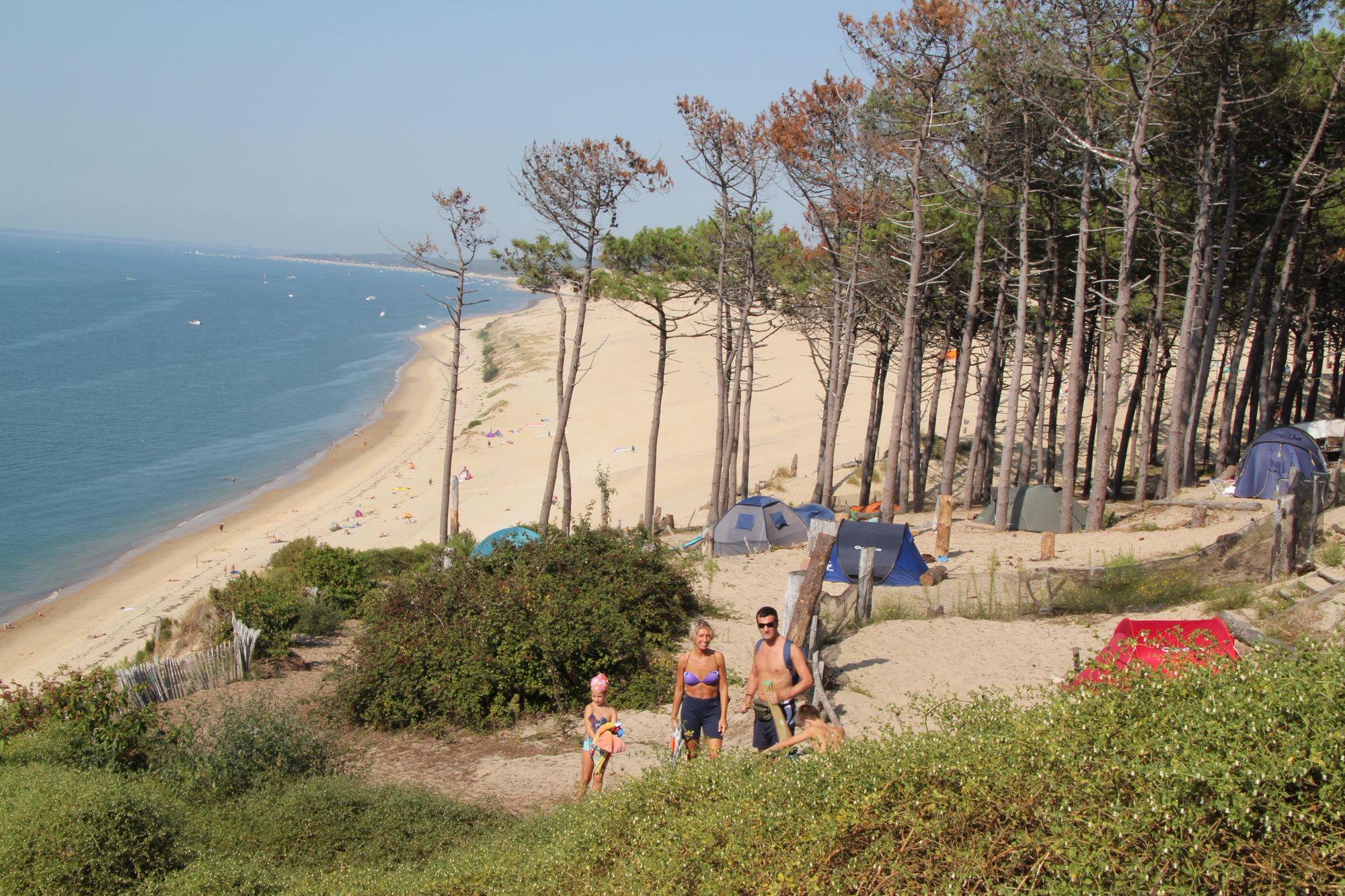 Aim for one of the 50 beachside tent pitches at Panorama du Pyla and you’ll find out how the place got its name. Perched on the edge of Europe’s largest sand dune, this campsite offers unbeatable views of sunsets over the sea, the nearby île de Oiseaux and the biggest pile of sand this side of the Sahara. The rest of the site’s pitches are tucked on terraces among the pine trees, offering welcome shade in the summer months. It’s got plenty of facilities from a pool to an a la carte restaurant but it’s the sea views and dune-side location that sets it apart from the other campsites in the area. 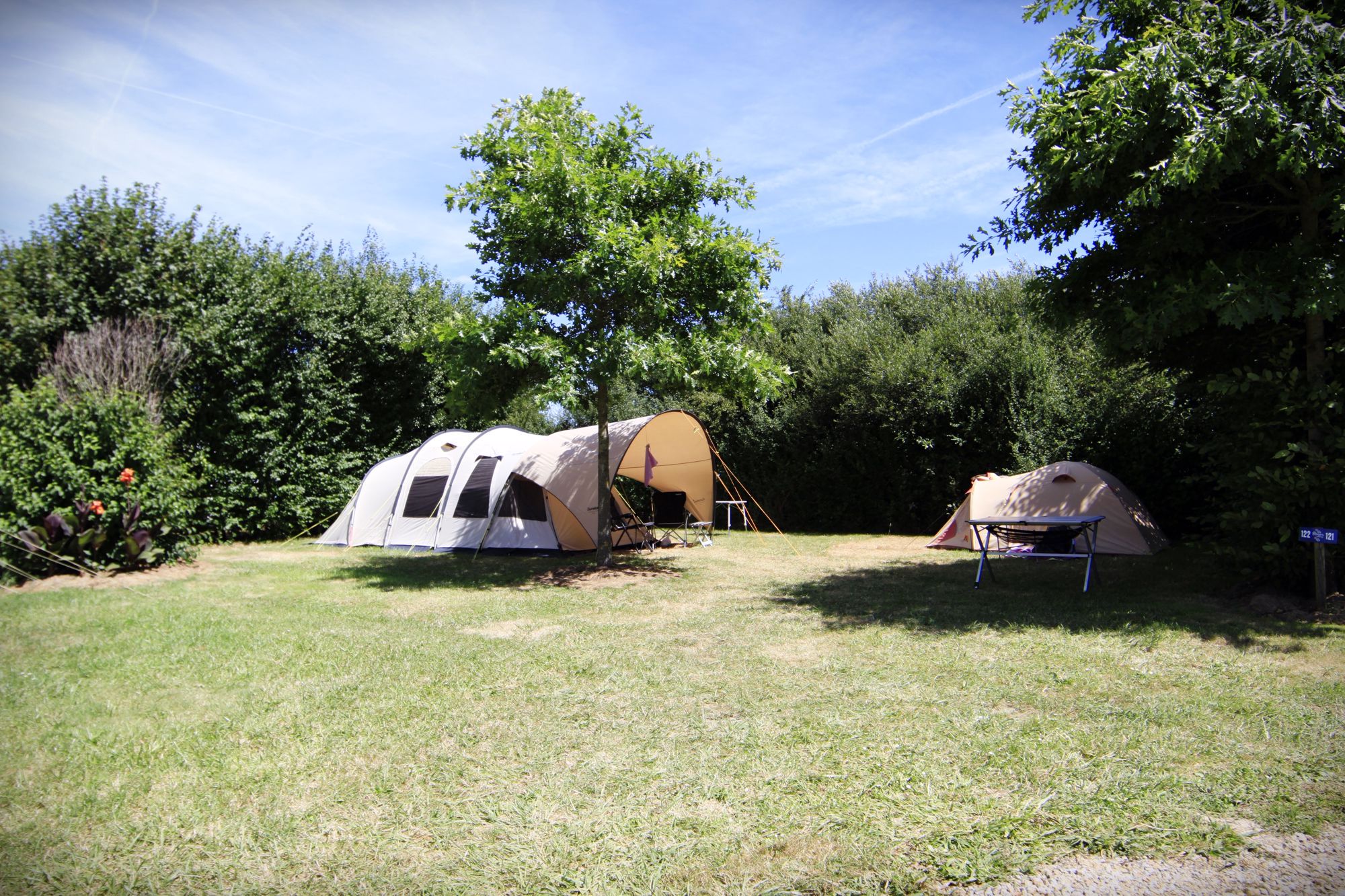 It’s a ten-minute drive to the coast from the peaceful pitches at Flower Camping La Vendee but it’s still a waterside campsite. The 165 pitches (along with their chalets and safari tents) are set in 15 acres of parkland around a lake – and there are two indoor swimming pools too. Pitches are spacious, each at least 150 metres square, and facilities are plentiful. It’s a great base if you want to visit Noirmoutier, an incredible tidal island with salt marshes, great beaches and a Mediterranean feel. 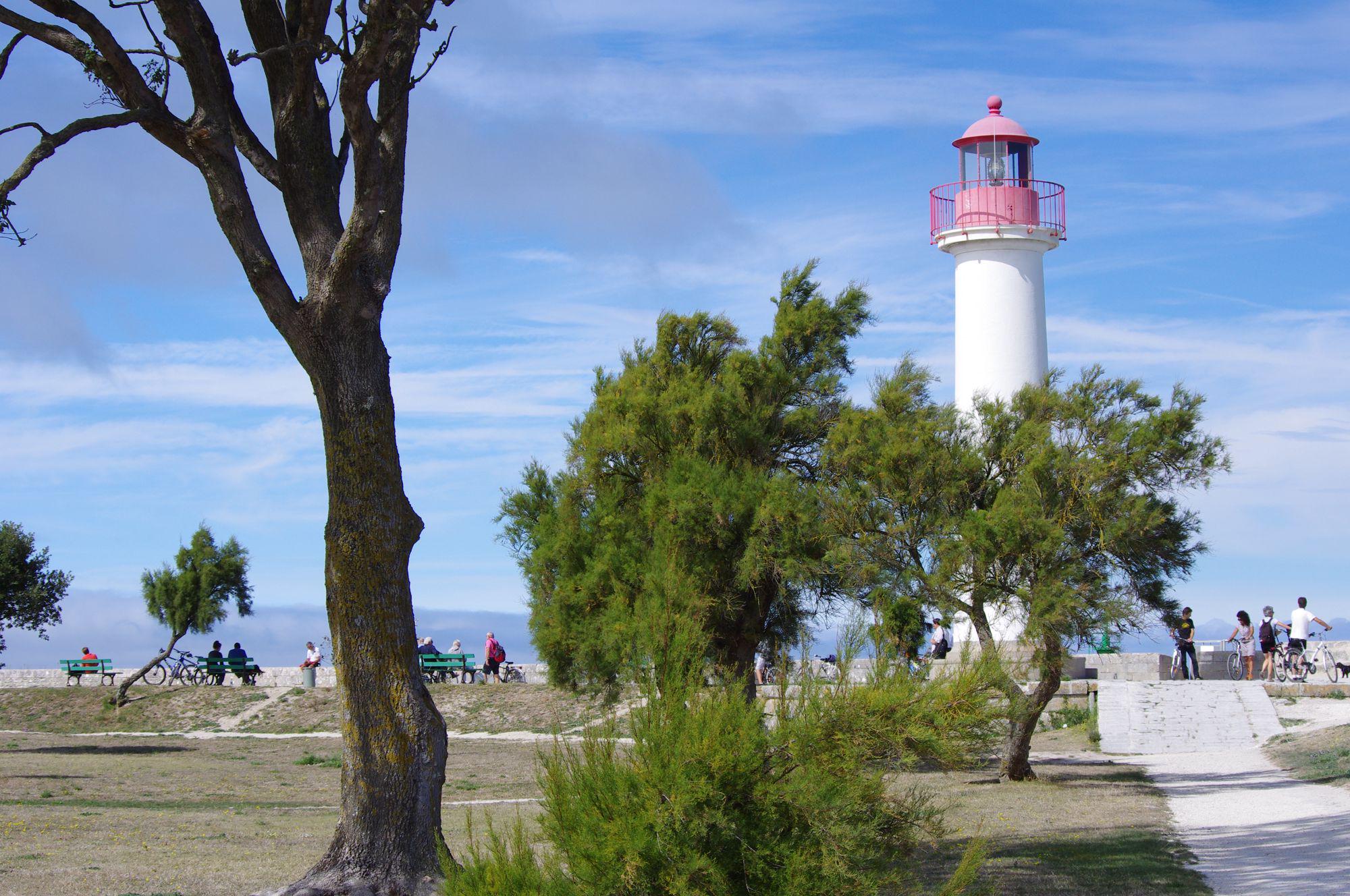 If camping in the shade of pine trees within reach of a beach and pootling around on bikes sounds like your kind of French holiday – get yourself straight to île de Ré. Halfway down France’s west coast, off shore from La Rochelle, is where you’ll find this idyllic island which is a camping hotspot. We couldn’t decide which of Huttopia’s two île de Ré campsites to include here so you’re getting two for the price of one. There’s Huttopia Chardons Bleu where you can camp or glamp just a kilometre from the coast and Huttopia Côte Sauvage which is right on the dunes of Base Benaie Beach. Chardons Bleu boasts a swimming pool and seasonal restaurant while Côte Sauvage’s crowning glory is its handful of sea-view pitches, just 20 metres from the sea. Decisions, decisions… 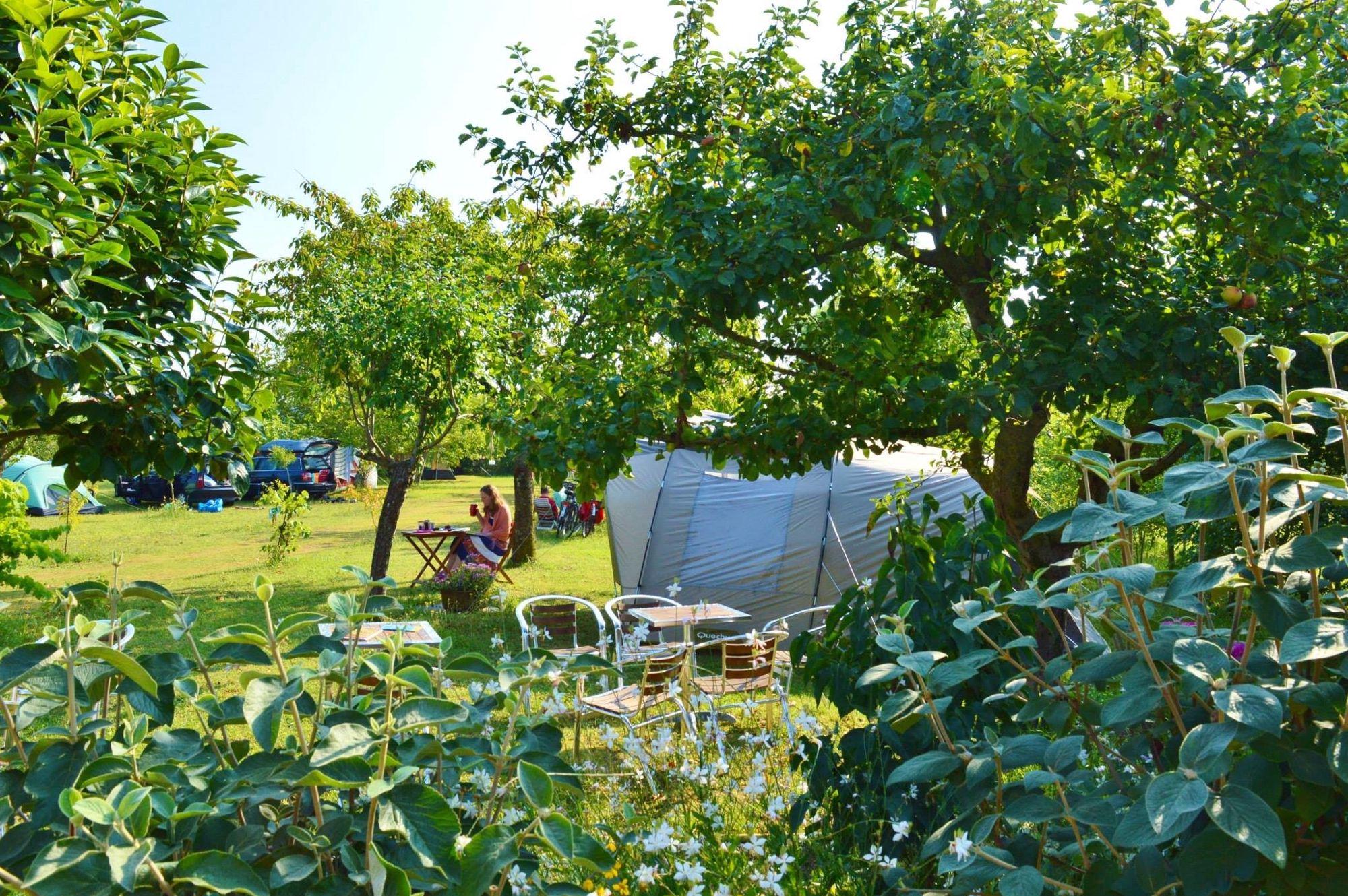 This small site, minuscule by French standards, has 60 pitches split between the back garden and small orchard belonging to owners Catherine and Sylvain. You can pitch in the shade of apple trees and help yourself to their bounty. The campsite is inland but connected to the coast at La Rochelle by a seven-kilometre canalside tow path. It’s a pleasant cycle and at the end of it you can explore La Rochelle’s historic sites or tuck in to some of the seafood that the area is famous for. And if it’s a spot of sunbathing you’re after, pedal a little further to reach the magnificent beaches of île de Ré. 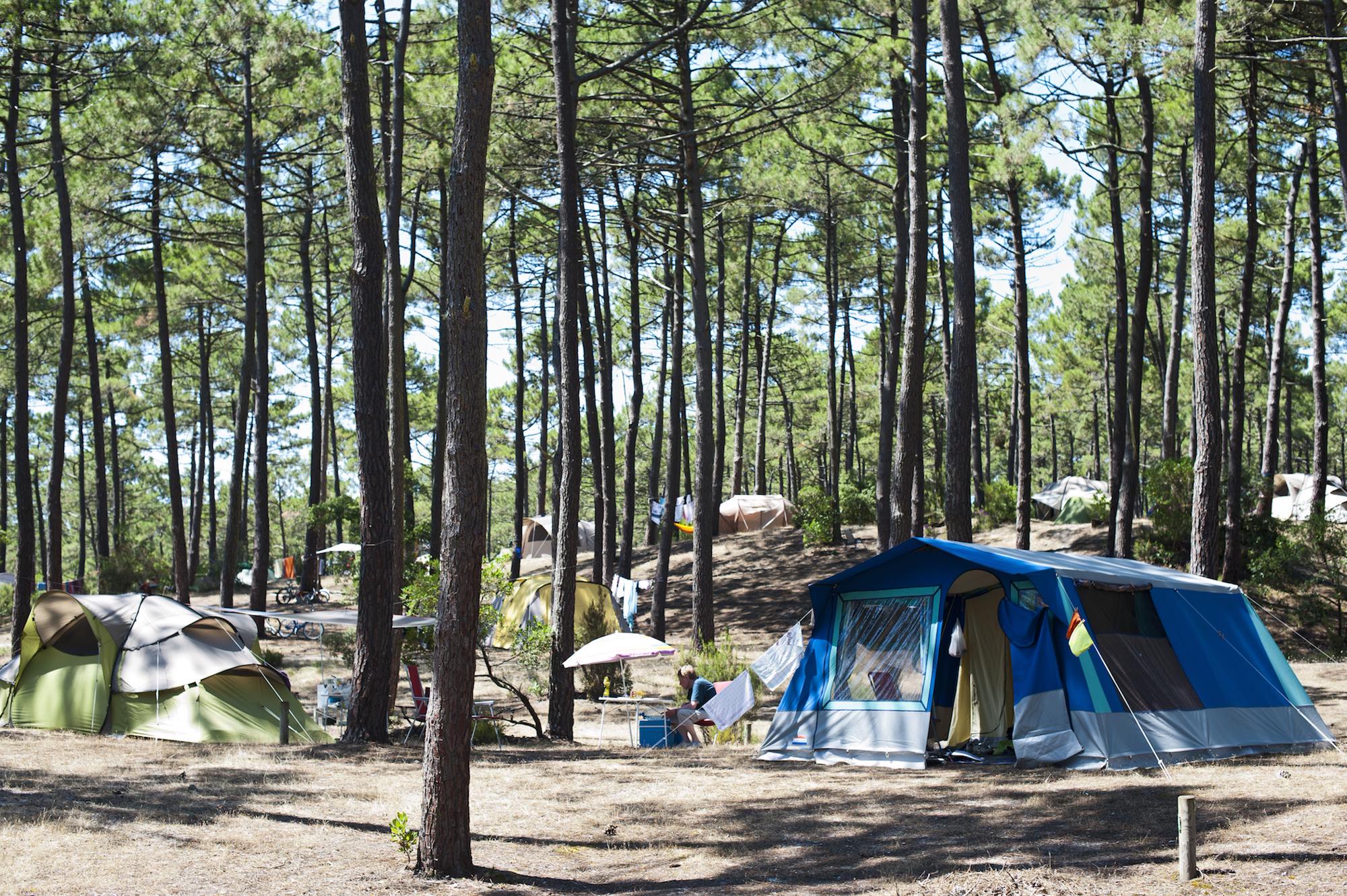 Camping or glamping? Swimming in the lake or paddling in the sea? At Huttopia Lac de Carcans, the choice is yours. This site sits on the edge of the huge Carcans Maubisson lake and it’s just a short bike ride through pine trees away from the beach. Swimming, cycling and watersports are just about all the entertainment you’ll need. It’s a large site with lots of facilities in an area that’s popular for camping so, if you’re visiting in the height of summer, you can expect a lively atmosphere along with bucketloads of fun. 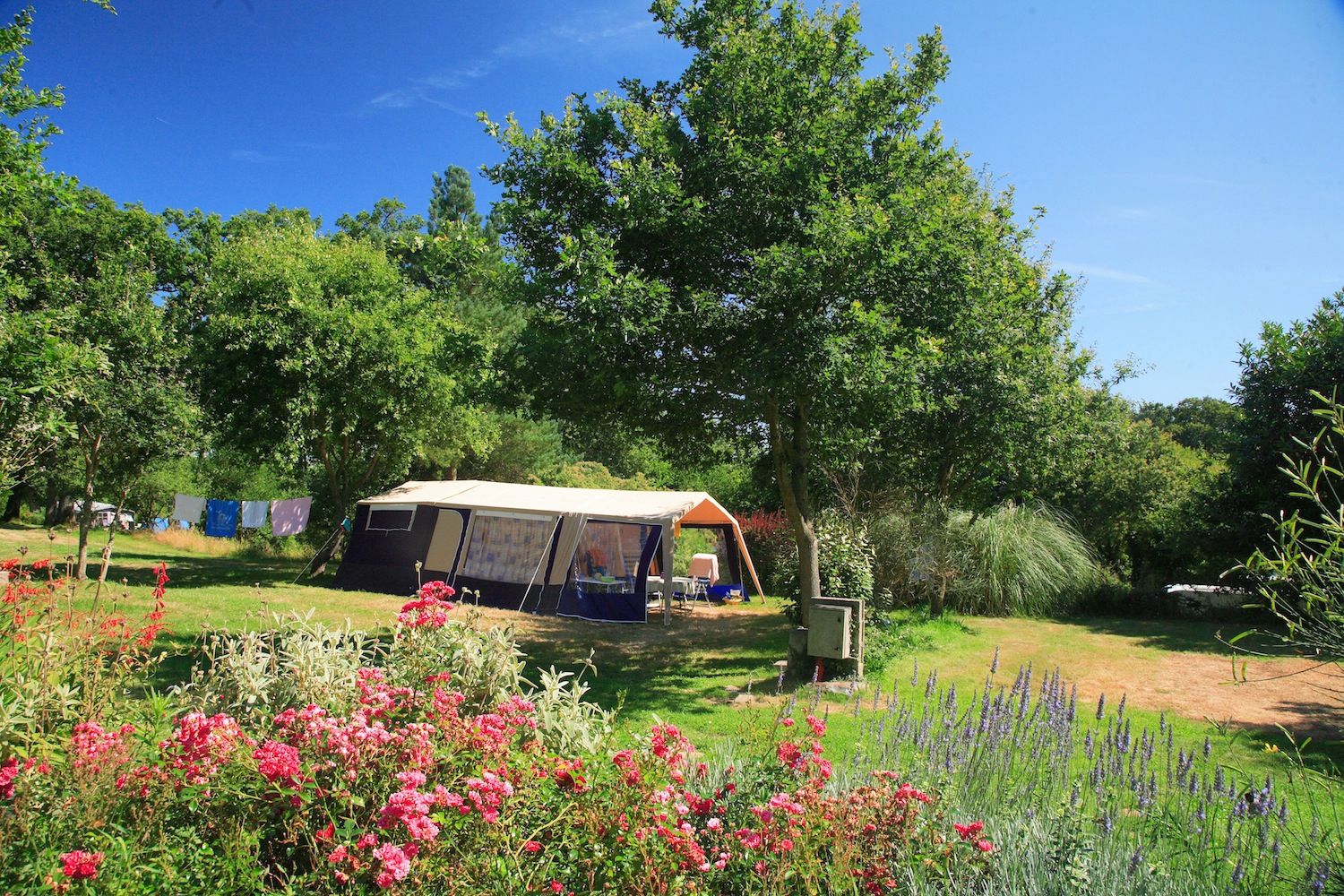 Pitch up at Camping Le Deffay and you’ll be staying in the grounds of a French country estate. And not only that; it’s in the middle of Brière National Park too. Although this site is fairly sizeable, with 90 pitches for tents and tourers and a further 60 statics and chalets, it has a more natural feel than many French campsites. Tent pitches are separated from the statics with a lake that’s yours for fishing and wildlife-watching. And there’s more for nature lovers out in the national park which is a network of marshland and inland waterways known for its birdlife. But if it’s the beach you’re after, head for La Baule, widely recognised as one of Europe’s best with 12 kilometres of golden sands – a 30-minute drive away. 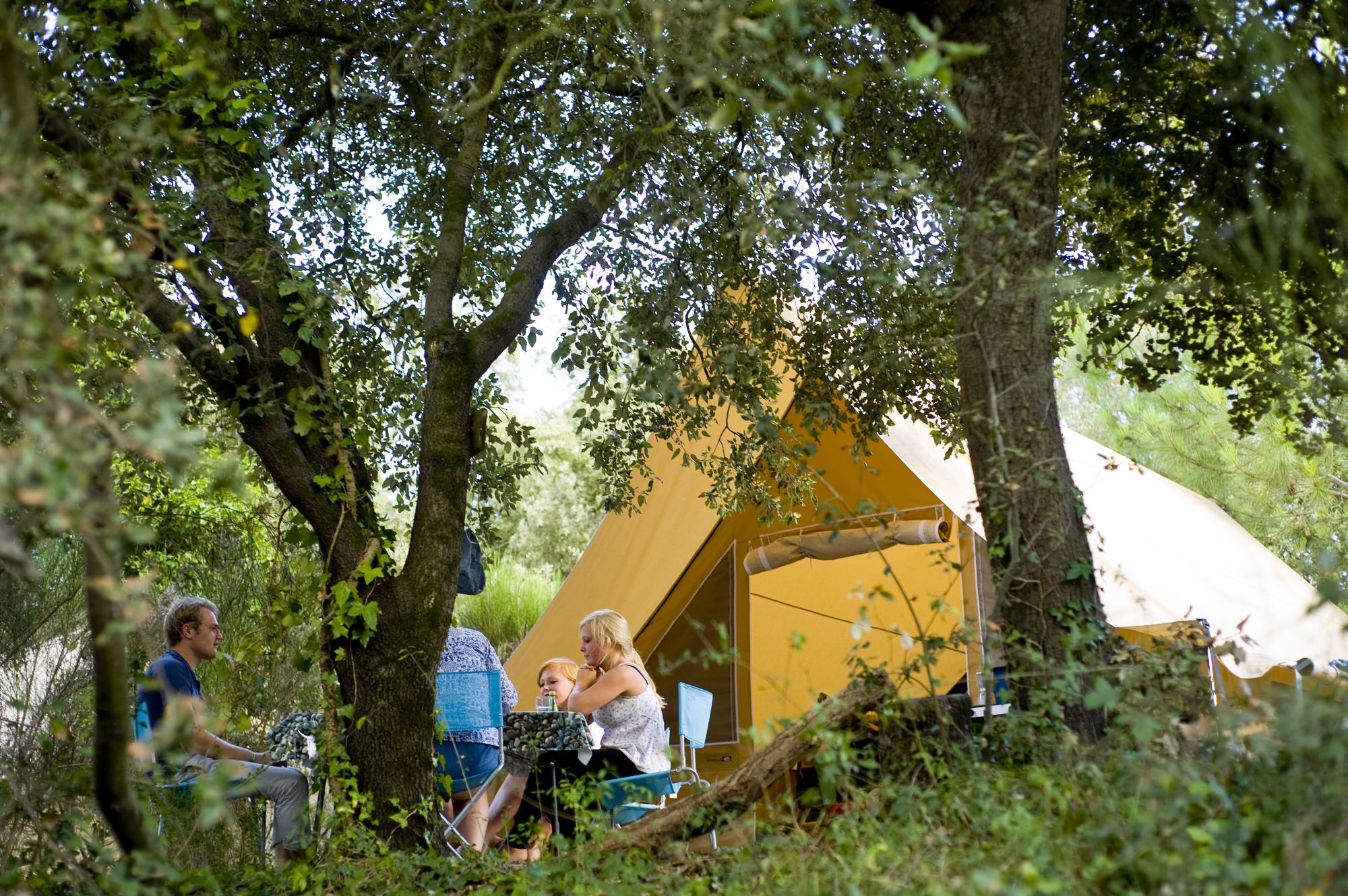 The tent pegs will slide in with ease at Camping Oleron Les Pins as it’s sand underfoot at this island campsite off the west coast near La Rochelle. But if you don’t want to pitch your own, you don’t have to as this 12-acre site has pre-pitched safari tents for glampers too. All are shaded by pines and the site is just a kilometre from the nearest beach. Facilities on site include a swimming pool, volleyball, pétanque and a peak-season pizza van. 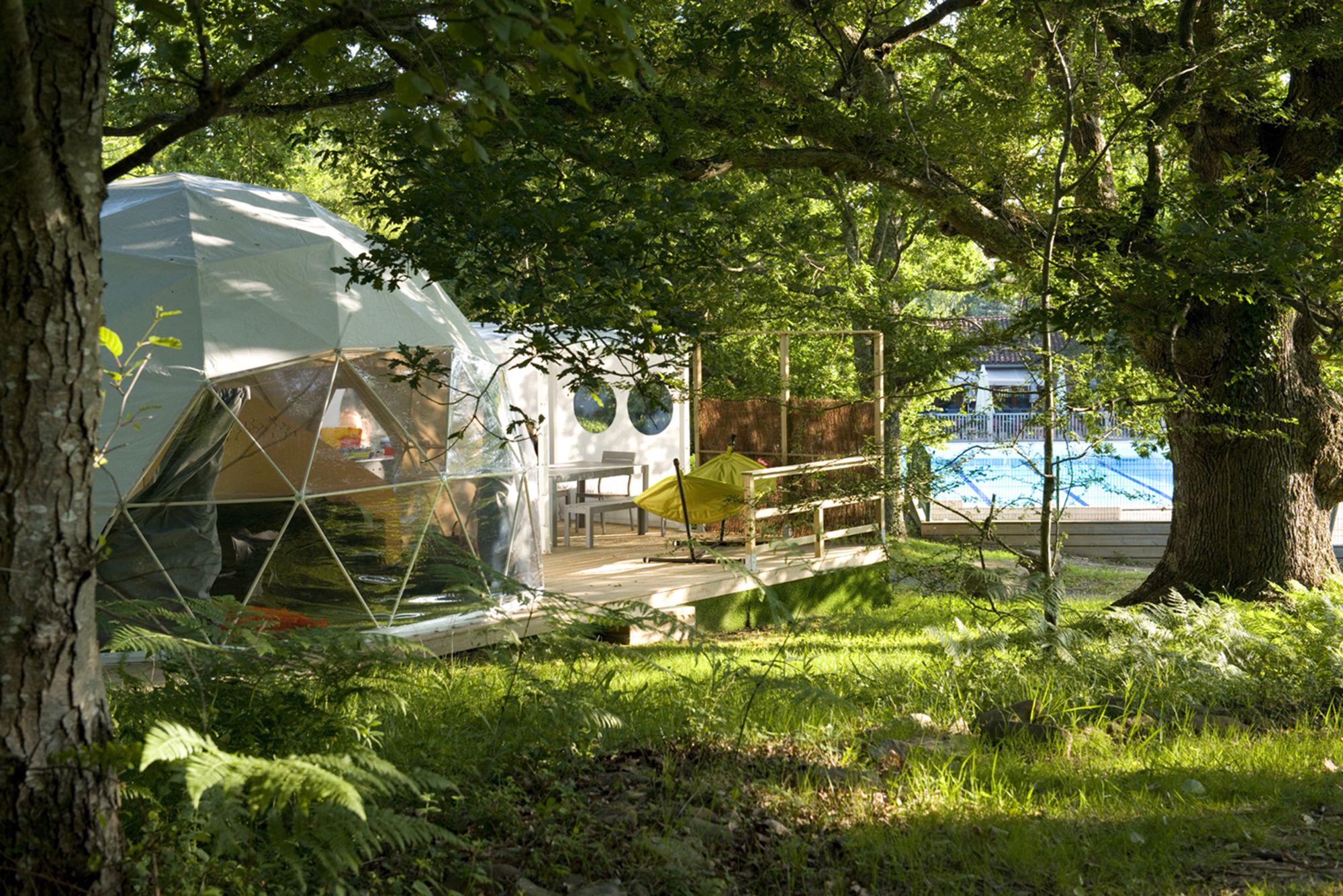 Is it a tent? Is it a UFO? No – it’s one of Glisten Camping’s ultra-modern, extra spacious and hyper-cool camping domes! There are six of these geodesic domes set up at Col d’ibardin, a campsite in the Basque region, in the foothills of the Pyrénées. There’s great walking and cycling in the surrounding countryside, surfing and sunbathing at nearby beaches and day-tripping to Biarritz and San Sebastian. That’s if you can bear to leave your dome. Each sleeps up to six with partitioned bedrooms, proper beds for adults and fun, hanging beds for kids. You have full use of the campsite’s many facilities which include a pool, bar and kids club.