From UNESCO sites to air pollution, we pull together the statistics to reveal the best countries in the world for living life in the great outdoors

At Cool Camping we love the great outdoors and, for us, time outside is about much more than just weekend camping holidays. From hiking and biking, to simply getting out into the countryside and exploring new places, we know (and studies have shown) that time outdoors helps us live happier, healthier lives.

This year, we've not only been working hard to find the best places to camp, glamp and pitch your tent beneath the stars, but we've also dug through the figures and searched the statistics, to find out exactly where you should live if you really want to make the most of nature.

We can now reveal our brand new Fresh Air Living Index, ranking the best places for outdoor enthusiasts to live, 365 days of the year. 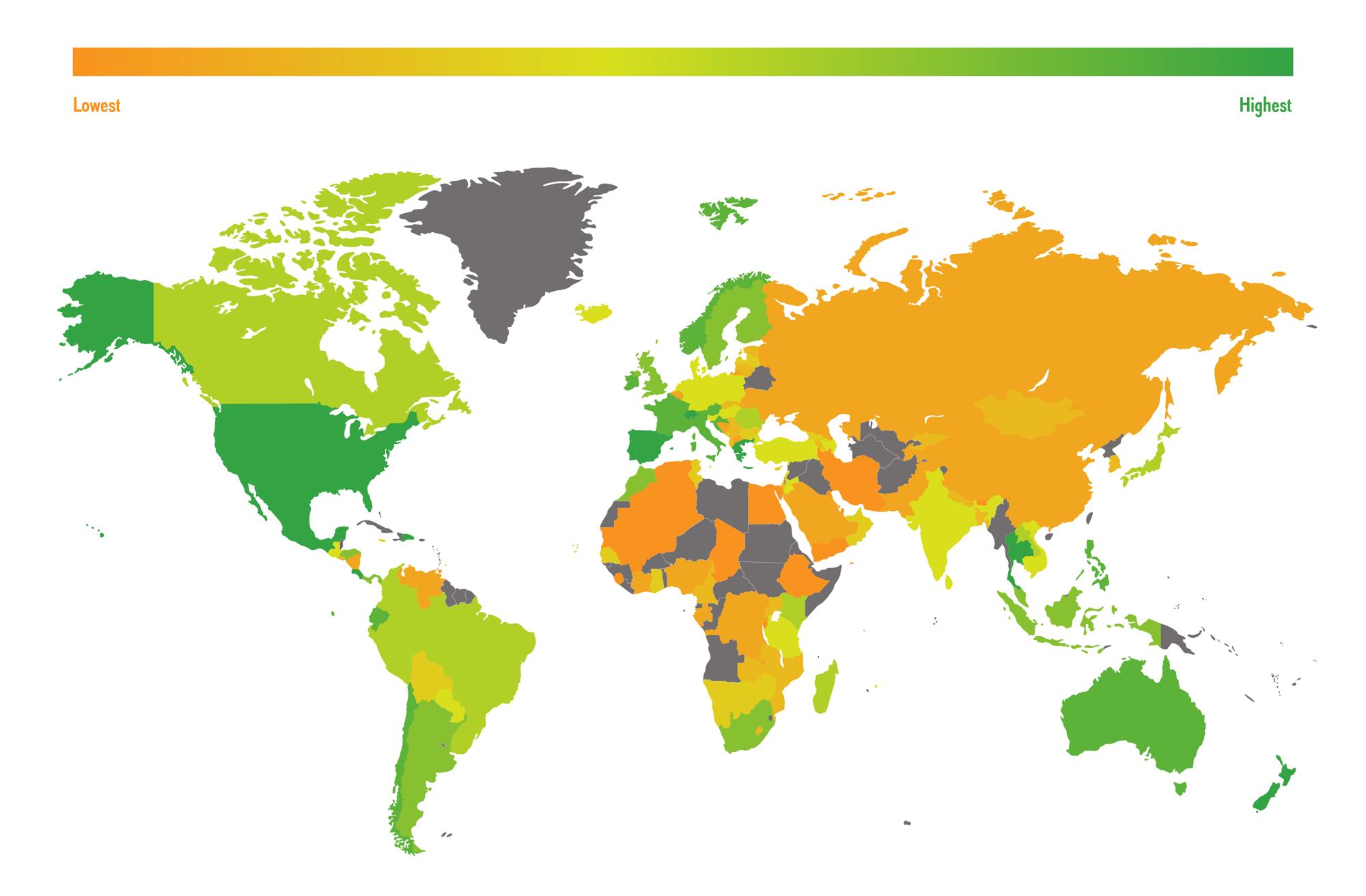 Compiled by analysing a variety of factors that we believe any right-minded outdoor enthusiast would find important, our Fresh Air Living Index identifies which countries around the world best meet the criteria, then brings every outdoor factor together in an overall ranking. Important factors include the number of natural UNESCO sites a country has, the average level of air pollution and the number of recognised, long-distance hiking routes available to trek.

Right at the top of the list in first place was Spain, with an incredibly low air pollution score and a high rate for the attractiveness of its natural assets (which calculates to what extent international tourists visit the country mainly for its natural assets). Key features helping Spain in this regard include the Gaztelugatxe, a little islet in the bay of Biscay, and the Somiedo National Park, near the Cantabrian Mountains, which is a designated UNESCO biosphere reserve and a European Union special protection area for birds.

While a number of tiny campsites in the Somiedo National Park have featured in our guidebooks over the last decade, other European destinations topping the index include Greece, Portugal and Switzerland, which all featured in the top 10.

Ranked 21st on the list, the UK falls behind evidently wilder countries such as Norway, Australia and Chile but stands out in particular for its high levels of access. With the largest number of recognised long-distance footpaths of any country on the list, historic routes, coastal trails and by laws such as 'the right to roam' help give UK residents rights of way that's the envy of many other nations.

Read on below to see the full results of our Fresh Air Living Index. 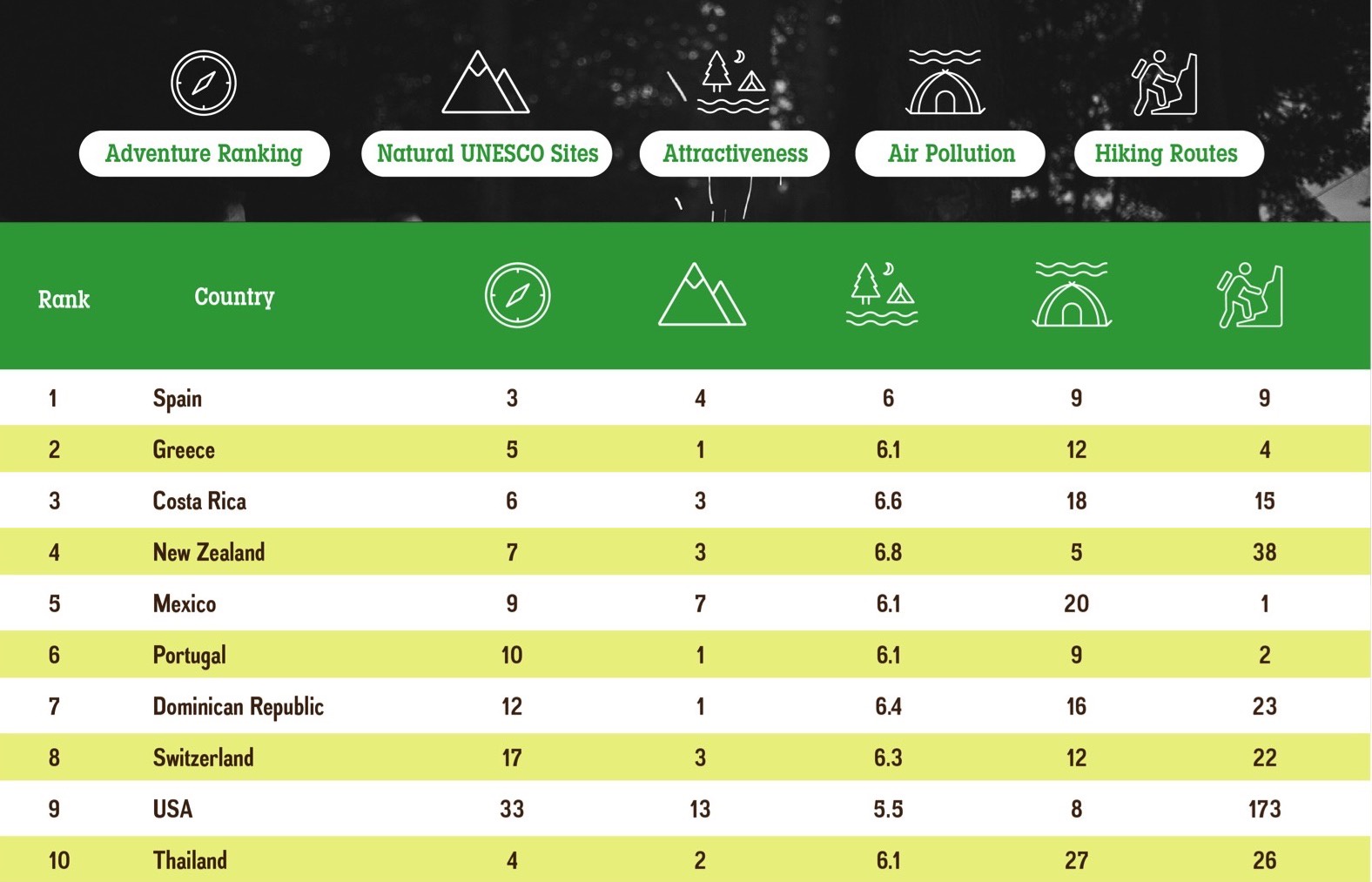 Spain was ranked as the number one destination for outdoor enthusiasts after it ranked highly in almost every category. Not only did it come third on the US News’ Adventure Rankings list, it also came 11th in the world for the number of natural World Heritage sites in the country. These include the historic centre of Cordoba, which features an array of ancient architecture in the form of multiple mosques and cathedrals, most of which date back to the 8th century, as well as Las Medulas, with ancient gold mines carved into the cliffs.

Greece ranked second thanks, in part, to being 5th on the US News’ Adventure Rankings List, out of 80 countries, but also because it had a number of renowned hiking routes and an excellent air quality score. Big draws like the Acropolis, also helped it rank one of the highest for attractiveness of natural assets

Following Spain and Greece, the rest of the top 5 countries are:

We were enthusiastic to see Portugal and Switzerland rank in the top 10, and France in the top 20. These ranked highly for a number of reasons: Portugal's famed coastline and fantastic sites – such as the Pena Palace or Belém Tower – lend it points for natural assets, while the Alps help both France and Switzerland obtain a high number of fantastic hiking routes. The Tour du Mont Blanc and legendary GR20 hiking trails in France, for example, are popular with campers visiting from the UK, while low air pollution rates (similar to those of the UK) also worked in France's favour.

The overall results by continent are:

The full list of results can be found below, followed by an explanation of the methodology we have used.

To compile the Fresh Air Living Index, we used the following methodology. We analysed every country on the below factors:

To identify exactly what each destination has to offer, we searched through a variety of sources – including how many UNESCO sites the destination offered, calculated to take into account the size of the country. We also looked at the US News’ official Adventure Ranking, which ranked 80 countries in order of how good they were for an adventure trip/holiday (any countries that weren’t featured we automatically gave a score of 81, at the end of the list). We then added in the air pollution levels for each country, and the number of hiking routes.

For each of the above categories, we scored each country from 1–5 (with 5 being the highest) and added these scores together in order to get our final FALI score, with a total of 25 being the highest available. We then ranked the countries based on their scores.