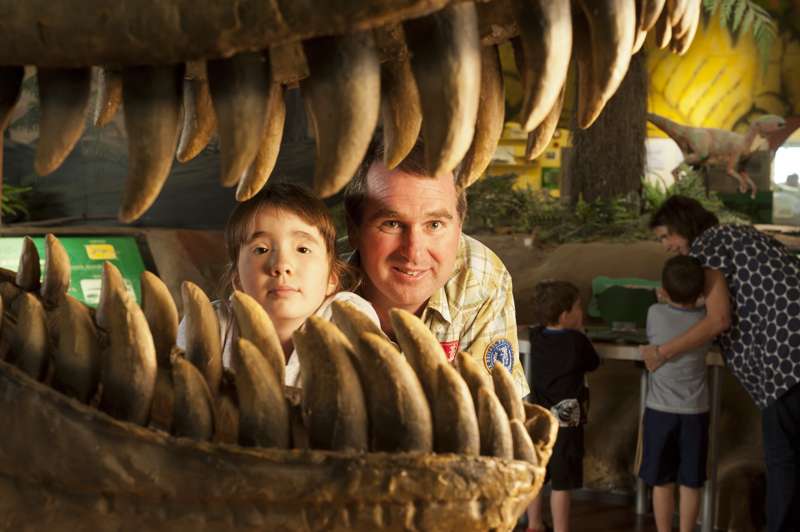 8 Must-See Historical Attractions on the Isle of Wight

For an island that’s only 25 miles across, the Isle of Wight has more than its fair share of history. It has been dubbed the “dinosaur capital of Britain”, has one of the finest Roman sites in the UK and was the ultimate Victorian seaside destination (favoured by Queen Victoria herself). To help you nose around the right nooks on this incredible island, we've compiled a list of Cool Camping’s must-see historical attractions. So, the next time your camping on the Isle of Wight and have a hankering for a little history, you'll know exactly where to look...

The oldest of the Isle of Wight’s historical attractions can be found in one of its most modern museums. Built in the shape of a pterodactyl and opened in 2001, Dinosaur Isle is Britain’s first purpose-built dinosaur museum and home of the Isle of Wight’s geology and fossil collections. The island is considered to be one of the richest areas of dinosaur discovery in Europe with evidence of 15 different dinosaurs having been found within its shores. Life-sized replicas of some of them bring the Jurassic period back to life alongside interactive exhibitions and displays of some of the best finds. The museum is located in Sandown, near some of the island’s best rocks. Guided fossil walks starting from the museum take place on a regular basis.

Roman history is unearthed at Brading Roman Villa where some impressively intact mosaic floors are the centrepiece. The villa and its ornate floors were discovered on this site by a sheep farmer in 1879. Careful excavation around them revealed the extent of the villa which has been protected ever since and is now under cover in a museum building. History is brought to life for younger visitors with a range of activities including coin rubbing and mosaic making. There’s even the opportunity to dress up as a Roman or to try your hands at some Roman games. There’s space for picnics outside and an award-winning café with views over Sandown bay too.

There has been a castle at Carisbrooke, a hilltop in the middle of the Isle of Wight, since the time of the Norman invasion but much of what can be seen now dates from the 16th century. Now managed by English Heritage, there are exhibitions explaining its history and the people who have lived within its walls – including King Charles I who was imprisoned here after the English Civil War before his execution. Children and animal lovers will enjoy meeting the working donkeys on site, traditionally the source of power for a treadwheel used to bring water up from a 16th century well. The castle is also the official residence of the governor of the Isle of Wight, and contains the island’s war memorial inside the St Nicholas Chapel and a museum in the Great Hall.

You won’t be able to help but reach for the camera if you visit Shanklin Old Village where thatched-roofed buildings cluster around the high street. These quaint and much-photographed buildings now house tea rooms and gift ships but were originally fisherman’s cottages – and form the oldest part of the town. Just along the road is the entrance to Shanklin Chine, a wooded ravine and tourist attraction, that leads down to the seafront and will have you snapping away again. It was the opening of this in 1817 and the rising popularity of seaside holidays that brought about the development of the town and seafront. Both Keats and Jane Austen are said to have enjoyed walking through the chine and you can still see the place where Keats stayed, Eglantine Cottage, in the village.

Queen Victoria and Prince Albert’s summer retreat at East Cowes might offer a bit of a contrast to your summer glamping getaway on the Isle of Wight! But try not to feel too jealous: even the royals could not face the extensive upkeep involved in keeping this royal mansion going and it was gifted it to the nation soon after Queen Victoria’s death here in 1901. As a result, the rooms have changed little from how they were in her lifetime. You can explore both the lavish and ornate state rooms as well as Queen Victoria and Prince Albert’s private quarters and discover the beautiful gardens and private beach outside. The estate was bought by the royal couple in 1845. They demolished the existing house and built what can be seen today to a design by Prince Albert.

At the westernmost point of the Isle of Wight, overlooking the famous Needles chalk stacks, are two National Trust-managed former batteries. The Old Battery was built in 1862 and was used in defence during both world wars. The story of this Victorian coastal defence position is told in cartoons drawn by the comic book artist Geoff Campion. But it’s not just the military history that makes the Old Battery worth a visit: you can get unrivalled views of the Needles by following an underground tunnel to a searchlight balcony. There is a charge for those who aren’t members of the National Trust but everyone gets in for free at the nearby New Battery where British-made rockets were tested during the Cold War space race.

On the easternmost side of the island, at the other end of the same chalk ridge as the Needles, is a less-visited but more-vast Victorian defence, Bembridge Fort. Sometimes known as “Palmerston’s folly”, it was built to defend against an attack that never happened – although it was later used during both world wars. Now, the National Trust is leading a restoration and visitors can head there to join volunteer-led tours which reveal its history, features, stunning views out in to the Channel and on-going restoration work. Unfortunately, it is not suitable for children under 10. The surrounding chalk downs, cliffs and beaches are great places for walking and wildlife too.

The Isle of Wight Steam Railway

You don’t have to be a train-spotter to enjoy a heritage railway: the shiny brass, billowing steam and old-fashioned advertising seem to appeal to all ages. At the Isle of Wight Steam Railway, you can step aboard restored Victorian and Edwardian carriages to travel five miles between Smallbrook Junction and Wootton. This section of track was once part of the Ryde-Newport line, which operated passenger services between 1875 and 1966 – just a small part of the 55-miles of track that once criss-crossed the island. The railway has rescued and restored many locomotives, carriages and station paraphernalia which you can see on board the trains and at the stations. It’s also a bit of an all-weather activity so a great day out during a glamping holiday on the Isle of Wight come rain or shine!