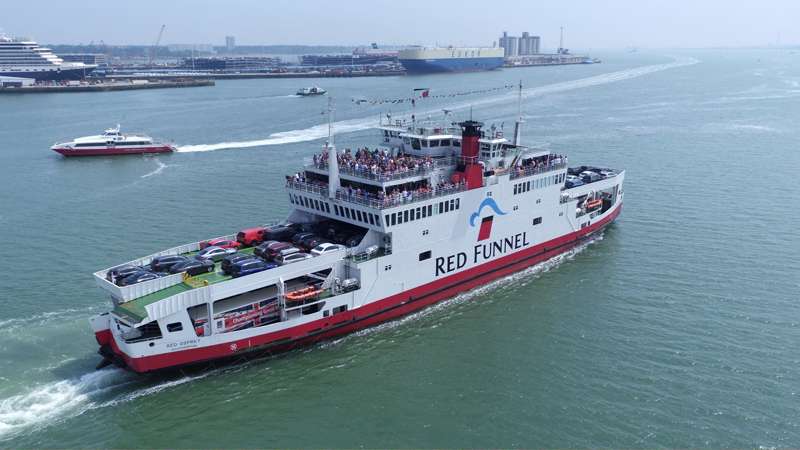 Travel Information: How to get to and from the Isle of Wight

Once you’ve booked a holiday on the Isle of Wight, you’ll need to decide how you’re going to get there. Separated from the mainland by the Solent, it is necessary to take to the seas to reach the island – and that’s part of its irresistible charm. Step aboard a ferry to head to this holiday island and you can leave the mainland and your worries behind. But there’s several routes to choose from and depending on which campsite on the Isle of Wight you've chosen or where abouts in the UK you are traveling from, you may wish to take a certain route. To make life easier, we've put together the following Cool Camping travel guide on how to get to and from the Isle of Wight… unless, of course, your going for a proper upmarket Isle of Wight glamping experience and you’ve got your own private aircraft or yacht!

The shortest car ferry crossing between the mainland and the Isle of Wight, the Lymington to Yarmouth route is operated by Wightlink. Ferries carry cars and foot passengers and take around 40 minutes. This ferry operates between Lymington within the New Forest and Yarmouth in West Wight, from where there is good access to Freshwater and Newport by car or bus. On the mainland side, there is direct access to the rail network from Lymington Pier Station which links to Brockenhurst from where there are good connections with the South Western Railway. The journey offers great views of both the mainland and island coasts and ferries have an on-board café-bar.

Another Wightlink ferry route, the Portsmouth to Fishbourne route takes 45 minutes to cross the Solent. The Portsmouth side has excellent road and rail connections – the ferry terminal is a ten-minute walk from the Portsmouth Harbour Railway Station and bus interchange. You disembark on the island in Fishbourne on the north of the island which has good road access to the rest of the island especially nearby Ryde and Newport.

The Fast Cat catamaran operated by Wightlink takes just 22 minutes (the second fastest crossing) to take foot passengers between the mainland and Ryde Pier Head. The shallow waters around Ryde mean that the catamaran has to dock at the pier head – which makes for an interesting way to arrive or depart the island (especially for first-timers). There is a train station on the pier and you can take Island Line trains to Brading, Sandown and Shanklin. Ryde Bus Station is at the end of the 681-metre pier. Walk or take a two-minute ride on the train along the pier to reach it from where there are good links to the rest of the island on Southern Vectis buses.

Departing hourly in peak glamping season, the Red Funnel vehicle ferries ply the route between Southampton’s Red Funnel Terminal 1 and East Cowes on the Isle of Wight. The ferry travels along the river and out in to the Solent on a crossing that takes about an hour. It’s a great route if you’re driving as the Southampton ferry terminal is easy to get to from the motorway. On the Isle of Wight side, it’s equally easy to get to the rest of the island from East Cowes by road or bus. An added bonus of this route is that you’ll get to do a bit of sightseeing almost as soon as you arrive as you drive past Osborne House on the way out. Ferries have space for 200 vehicles and, unlike their Red Jet service (see below), advance booking is advised.

Red Funnel’s Red Jet service is a passenger ferry that operates between Red Funnel’s Terminal 2 at Southampton and West Cowes on the Isle of Wight. It is a non-bookable ferry, which operates at least every hour. It has a crossing time of 25 minutes and, on the journey to the Isle of Wight, takes you down the river and out in to the sheltered Solent. A bus service picks up right outside the Red Jet ferry terminal on the island and there is a shuttle between Southampton ferry terminal and the main railway and bus stations for onwards travel – it’s free for Red Funnel ticket holders.

Probably the most unique public ferry service to the Isle of Wight – and the fastest, Hovertravel provides the Southsea to Ryde route which takes just ten minutes to whisk you across the Solent. Hovertravel is Europe’s only remaining scheduled passenger service and the world’s longest-running commercial hovercraft service. It’s also an appropriate way to get to the island as the first hovercraft was manufactured here in the 1950s. While the Wightlink ferry service to Ryde stops at the pierhead, the Hovercraft is able to hover over the shallows to take you straight to the heart of the action on the esplanade. On the island side, the nearby bus and train stations provide great transport links to the southern resort towns and over on the mainland, there is a Hoverbus service which takes passengers to Southsea, Portsmouth Harbour and The Hard & Portsmouth Railway Stations. National Express coaches stop outside the terminal.

Browse all Isle of Wight Campsites