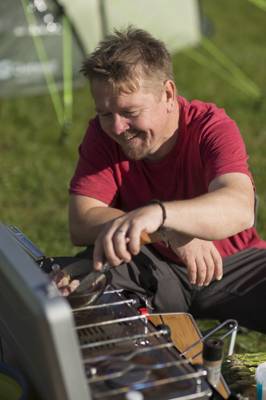 A word from the Guyrope Gourmet

i love food. i love eating it, i love looking at it, i love writing about it but, most of all, i love preparing and cooking it for my family and friends. i love camping, too, having spent most of my holidays under canvas since i was a kid. being the guyrope gourmet lets me marry those passions. fuelled by a fierce desire to do better than bangers and beans, i like to add a little adventure to the campsite kitchen, to try something different, and to have a lot of fun. using the recipes in my new book, anyone can be a guyrope gourmet, quickly throwing a delicious meal together with barely any faff.

How I became the Guyrope Gourmet is a story steeped in romance. I like to think that my culinary camping skills played a key role in courting the woman who later became my wife. Soon after meeting, we set off on a camping adventure. As I showed off with my lamb stew and my stuffed trout, I rather thought I was making an impression. And the fact that she later accepted my marriage proposal – offered on a campsite, after a fine supper of fresh grilled fish – only went to prove it. The seeds of an idea were sown. Dishes that pack a fancy punch but are actually deliciously simple – gourmet food that can be cooked and eaten outdoors, under the stars – well, I mused, there might be mileage in that. Talking with friends and fellow campers, it seemed I was right: many people were yearning for inspiration in the camp kitchen.

Camping has been a part of my life since early childhood. I remember the thrill, on family holidays, of helping my father pitch the Black’s Good Companion tent. The familiar, musty smell of the orange cotton flysheet and the sheen of the waterproof groundsheet heralded the start of each new adventure. But then came the food. The dull, unadventurous food. Baked beans, tinned tomato soup and Mother’s Pride sliced white bread slathered in Stork margarine. Even as a child, I longed for something more... exciting.

I learned my own cooking skills on the hop, and continue to do so. Memories of my grandfather’s delicious pearl barley- filled soups, my mother teaching me to make Tatws Pum Munud (you can read all about that in the book) and the disappointed look on Mrs Walker’s face when I chose to cook egg and chips for my home economics CSE exam, are all I can claim by way of a culinary heritage. A little later, my step-mum, Jude, taught me to balance flavours and to cook by taste. Once I’d flown the nest, my backpacking days opened my eyes to different styles of cooking and how to always make the best of what’s available. Slowly and surely I honed my craft under canvas, gathering tips and ideas with each new camping adventure.

More than ninety recipes are set out in Guyrope Gourmet. All were conjured up at some point on a campsite, and all are dishes that I cook regularly when I go camping with my family. They’ve been invented, begged, borrowed, stolen and adapted from all over the place, and I’ve done my best to ensure that credit is given where credit is due throughout.

Of course a good meal – especially a Guyrope Gourmet meal – deserves a good wine, or even a good local ale, so I’ve also offered a drink suggestion with most recipes throughout the book. I’m deeply indebted to my friend and wine aficionado, James Stark, who provided many of the wine ideas. His suggestions are just that – an opportunity to try something new, perhaps, and to have a bit of fun.

And fun, of course, is the key. I’m no purist – far from it. The realities of camping or cooking outdoors will often determine what sort of meal you end up eating. When the rain won’t let up and the kids won’t settle, the last thing you’ll want is to be shelling peas. And there’s no need to be precious about my book, either. The Guyrope Gourmet cookbook is designed to be used and abused. Don’t worry about spilling olive oil on page 13 or smearing tomato puree across your favourite recipe. That’s supposed to happen; it means you’re getting value for money. It’s meant to be a practical book, so make notes in the margins, use it as an impromptu placemat, or wave it around to fan the flames of the barbecue. The main thing is to use it to get out there, get to it, and above all, enjoy yourself!

See the guyrope gourmet in action...

Josh and his trusty VW will be hosting a very special summer supper club in London Town on 20th June. Come on down, enjoy the grub and meet the Cool Camping crew as we turn this corner of W2 into a summery camper's paradise. For a sneak peek at Josh's mouthwatering menu, click here.

Josh Sutton is a freelance writer specialising in camping cuisine. He is a member of The Guild of Food Writers and writes for various publications including the Guardian, Yorkshire Post, Camping Magazine, Fire & Knives, Gin & It, Green Parent Magazine and The Foodie Bugle and runs the popular camping recipe website www.guyropegourmet.com. He also hosts the country’s first ever tent-based supper club and is a veteran of food and music festivals, where he can be seen demonstrating the art of cooking outdoors and playing his ukulele. Josh lives in Yorkshire with his wife and two children, who happily test and approve all of Josh’s new recipes.