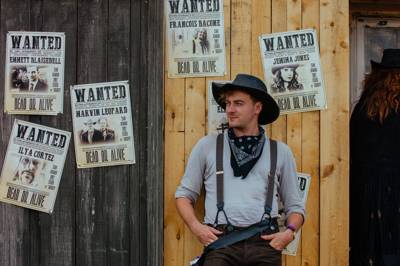 Cool Camping return to the Hertfordshire countryside for a Wild West festival with an ever growing reputation...

There are few music festivals you can return to year on year and still experience that same vivacious buzz you get from a first time discovery. Yet after our immersive experience at last year’s festival, we knew that the boutique streak at Standon Calling runs deeply enough to command our attention again. The ground under foot was familiar as we lugged our bags into the colourful camping village but the scenery had changed – this year’s theme “a town of two faces” had already soaked into the skin of everything in reach.

“It’s the Hill Billy Hoe Down!” hollered a toothless hick from the wooden clock tower. Encircled by Wild West style buildings, including the jailhouse cocktail bar (scene of late night, table-top dancing) and the Blacksmiths Cabin, the clock tower acted as an open air centre-point for festival happenings, with a constant swing of activities, from dance-offs and drag-queens to dog shows and gospel choirs. It’s all a part of the Standon style. The theme rules all and, while many festival goodies return year after year – a particular highlight being Saturday afternoon ‘Sock wrestling’ (one on one combat with the only mission to remove your opponents sock) – everything is done with the collective Ye Haw of festival goers immersed in this well-constructed new world.

At its heart, however, through the array of thematic tomfoolery, Standon Calling is still about the music. While it’s finger-on-the-pulse picks over previous years have included all from Mumford and Sons to Florence and the Machine, this years up and coming mix was equally impressive. Saturday’s BBC Introducing takeover, set in the garden of the Manor House that hosts the festival, saw local acts beating out their sound to a fancy dress clad audience. Essex band Longy, were a particular highlight. Their heavy guitar tunes and husky vocals seemed worthy of a more revelling, late night crowd (maybe something to be seen in the future), and snapping some guitar strings in the process only seemed to illustrate this point. Instead it was Nottingham group, Amber Run who took over the same stage come nightfall, unabashedly admitting it was the longest set they’d ever played and successfully crowd pleasing from start to finish. The rocky-poppy-indie group only released their first album this year but they had a pleasingly timeless quality.

Elsewhere, a circus-style big top created an atmospheric setting for young guns like Saint Raymond, Kwabs and Black Honey, while established Roots Manuva provided one of the most impressive performances of the festival to keep the crowd baying for far more than just his best known hit “witness the fitness”. The main stage was, unsurprisingly, the scene for the biggest crowds, headliners on Friday, Little Dragon gave a rather mellow sound for the opening of a big weekend – especially when following Ella Eyre who went for the more ‘short and sweet’ approach to her set, successfully giving the sense that it was really her who was there to start the party. Come Saturday the Dandy Warhols similarly failed to show how they were head and shoulders above the other acts, with some of their newer tunes passing the time until the crowd livened up for favourites “Bohemian Like You” and "We Used to Be Friends". Again, this was really testament to the incredible performance from Slaves an hour before, a sublimely loud and powerful hour from the second they arrived on stage.

The Cowshed – not just Wild West themed but actually a converted cow shed in the corner of the festival field – has a long standing reputation as the place to be once the headliners have played their encores and the kids have gone home. By Sunday those who survived through until sunrise milled around in the usual stuporous haze. All were riled back to life by the time Basement Jaxx took to the floor though, the main stage closers who didn’t disappoint, thumping out a set full of their most well-known numbers to one of the biggest crowds of the whole weekend. It was a perfect live act to finish off the festival, celebrating its tenth year since the event began as little more than a garden-party in the grounds of Standon’s manor house. The back catalogue of songs fitted the decade of music that has passed among the Hertfordshire meadows, the crowd growing with every song just as the festival has grown every year.

From children's workshops to the endless types of food and drink on offer, Standon Calling yet again showed itself to be a small-scale festival with big-scale ambitions and, for those eeking every ounce out of the weekend, the late night DJ sets of Gilles Peterson and Kid Fiesta still took those with the stamina through to the working week – a Monday for returning to the real world and leaving the saloon bars and hoe downs behind. As bleary-eyed campers packed away their tents an early morning mist was creeping in, leaving the festival fields in a wispy, natural cloak, as if hiding away the buildings until next year. By then a whole new world will have been created: New theme, new bands and an entirely new experience. When the cloak gets lifted, it’ll be like discovering the place all over again!