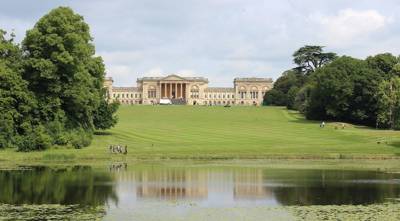 As Embers open a new campsite at the National Trust Stowe estate, camping at prestigious country houses is proving to be more popular then ever

It’s no surprise to us that Embers Camping have just opened up a new campsite within the National Trust-owned Stowe estate. Unusual though it may be to have such a privileged location, the success of their previous campsites, Embers Camping Beaulieu and Embers Camping Bentley, set a precedent that was only ever set to continue.

The Beaulieu site, just a few hundred meters from grand Beaulieu Abbey and the National Motor Museum, and the equally exquisite Bentley site, on the grounds of a vast estate, opened with little fanfare a few years ago yet straight away seemed something special. The combination of peaceful, rural camping and a prized, heritage attraction right on the doorstep left visitors fulfilled and happy, but hunting around for something similar the next year.

So who better to take up hosting duties than the National Trust, proud owners of the UK's most historical attractions, with hundreds of visitors every year? The low key, tent-only philosophy of the Embers sites means there's nothing obtrusive that could spoil the National Trust's landscape, while the family-friendly atmosphere sits well with their usual audience. The parents who once visited to cycle around the gardens of Stowe are now coming back with their kids in tow, socialising with other families in the quiet camping corner of the grounds.

Embers aren't the only ones to recognise the appeal of combining camping and countryside attractions, with more and more great houses opening a quiet corner of their grounds to campers. Now those of us who aren’t to the manor born can still holiday like kings and queens, with a growing selection of options to choose from. With 40 temples, oblesiks and monuments dating back to the 18th-century, the prestige of Stowe scores highly in the heritage hunters pecking order, but here are just a few of our other country estate favourites:

18th-century Exton Park claims a whopping 1,000 acres of land, though it’s the 5-acre walled garden where their luxury safari tents are pitched that really catches the eye. Over the course of history it’s seen performances by Handel and visits from William Shakespeare, while today the photographers of magazines like Country Life are also frequent visitors.

The 36 acres of undulating fields, immaculate gardens and enchanting woodland that surrounds the 17th-century manor house of Trewan Hall, makes for a near perfect camping spot. Positioned just outside the pretty parish town of St. Columb Major, this family-orientated campsite is small enough to feel private yet grand enough to inspire.

An arboretum, a lake, and a road away from impressive Eastnor Castle itself, lies the estate's deer park where you can pitch your tent for the night. It's a pretty chilled out affair; pitch up, settle in and eventually the park warden will wander by to collect your money. The castle grounds include a maze, a great playground for kids and a hilltop obelisk with staggering views.

Hesleyside manor in the fringe of Kielder Forest has been around since 1343 and their brand new huts certainly fit the classy manor setting. With wooden furnishings, sumptuous beds and everything needed for a cosy self-catered stay it's luxury living at its best. Outside you can fish in the prestigious North Tyne or tackle the world renowned mountain biking in the wooded National Park.

Lake, lawns and the lazy River Medway combine to form the grounds of 18th-century Chafford Park. The house and grounds are popular for weddings and there's a fantastic campsite occupying an apron of grass beyond. Welcoming up to 50 tents, Chafford Park has a perfect blend of space and seclusion plus the handy bonus of a fantastic pub just around the corner!