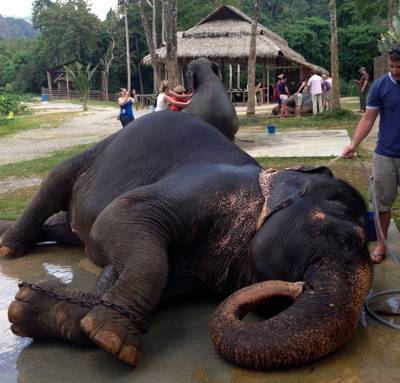 Jungle glamping in Thailand is the perfect mix of adventure and relaxation, discovers Alexandra Tilley Loughrey

Being smothered in elephant snot wasn’t quite what I had in mind when I’d booked a glamping escape in Thailand, but it was oddly refreshing.

I was standing in a clearing at the edge of the jungle, helping to feed one of these grand beasts at the aptly named Elephant Hills camp in Southern Thailand’s Khao Sok National Park. We’d arrived in the heat of the midday sun in a khaki painted safari truck with open sides - and having bumped across a dusty unmade track, we were pleased to be handed bottles of chilled water and happily glugged them down. Then banana leaves were dished out for us to feed the elephants and maybe it was the excitement, or possibly the dust, but 25 year old female Nab Aok opened her mouth, reared her trunk – and projected a gargantuan elephant-sized sneeze all over me.

The elephants at the resort have mostly been rescued from other parts of Thailand, although they have had some success with their own breeding programme, with the adorable baby Ha-Ha being a very welcome result. He was nearly two when we met him and full of Jungle Book cheekiness as we fed him handfuls of tiny bananas. Each of these magnificent creatures is looked after by a dedicated mahout, one of whom had given us a talk about food and health, before offering us the chance to get up close and personal by feeding and washing the elephants. Many of us, although slightly nervous of these wild animals, made a beeline for the washing, just so we could douse ourselves with the cool water from the hose – and I was quite keen to wash off the snot.

Even in the short time we spent with the elephants, it was fascinating to see their different characters and personalities. Nab Aok ate her medicine (a tamarind ball wrapped in salt, rice and a palm leaf) immediately, but hurled back her bananas, whereas Mae Tong Dee hurriedly discarded the medicine offered to her and grabbed palm leaves by the trunk-full. And then there were those with a penchant for sneezing over the visitors.

Elephant Hills occupies two locations, about an hour’s drive apart. The Jungle Camp is on the southern edge of the national park and offers glamping accommodation in 30 khaki mess-style tents with limestone mountains (karsts) and lush green vegetation as a backdrop. The rainforest camp is further north and consists of 10 safari tents floating on a wooden pontoon on the edge of the Chaow Larn freshwater lake. Visitors arrive initially at the Jungle Camp and are welcomed by a huge open-sided lobby offering shelter from the day’s heat, and gently cooled by colonial-style fans. Communal wooden tables and benches are scattered around and guests can grab freshly squeezed watermelon juice or a cool Singha beer from the bar and chill out, swapping stories from the day’s activities. In the evening, the crackle of an open camp-fire enhances the jungle atmosphere, as huge rhino beetles and moths as big as small birds come in to land next to (often – on) unsuspecting guests. It takes a bit of getting used to, but with the help of some mossie spray and a video camera to catch the action, it all becomes part of the entertainment.

The glamping tents in the jungle camp are set in a luscious green garden of spikey ferns and banana and coconut palms, accessed along a cool, shaded path. Each has a huge king sized bed (or twin singles) with freshly ironed cotton sheets and for those travelling with children, there are metal-framed camp beds as well. The elephant theme is woven into the design of the rooms, with candle holders, dainty carved wooden light pulls, and carvings inlaid into the whitewashed stone walls of the bathroom (the en-suite morphs seamlessly from tent into a cool stone extension). These are luxurious, spacious and comfortable ‘rooms’, yet you still feel completely immersed in the jungle, able to appreciate its wonders more intimately than day-trip trekkers. Waking up in these canvas rooms is an experience to savour – we slowly stirred to what we thought was bird-song, but was in fact the local male gibbon. He was accompanied by numerous cicadas and whatever creature it is that sounds like a repetitive, piercing fire alarm.

There are still wild elephants, bears and even a handful of tigers in Khao Sok, but there’s no danger of an encounter, as they stay well away from inhabited areas and man-made tracks, living miles away in the densest part of the jungle. I found it hard to believe that we’d see any wildlife at all on a guided kayak down the river, especially in the mangrove swamps, as they initially seemed so muddy, murky and lifeless, but our expert guides proved it was bursting with jungle critters.

After only a short paddle along the peaceful Sok river we spotted a huge golden web spider, the size of a man’s hand. Then suddenly there was a kingfisher flitting overhead with flashes of iridescent turquoise feathers glinting in the sun. And a bit further on, directly above us, a mangrove snake, curled up in the branches of an overhanging tree, oblivious to all the excitement below. We had been promised ‘coffee in the jungle’, so at an opportune time, the kayaks stopped and we all scrambled ashore. In a matter of seconds it seemed, an open fire was built and lit, and a huge old metal kettle slung over the flames. Peering out from the thick wood-smoke, the guides cheerily dished out paper cups, offering coffee, tea or hot chocolate. As we sipped our jungle coffee, the guides pointed out even more wildlife all around us – a myriad variety of frogs of varying sizes and colours. Minute brown ones as small as a penny coin hopped amongst the slimy pebbles we were standing on. And then as quickly as we had arrived, cups were gathered up, the camp deconstructed and everyone hopped back into their kayaks. As we paddled back to camp, we were treated to a fitting grand finale for our kayak safari. In a blur of acrobatic bravado and excited, high-pitched screeching, a troop of cheeky macaque monkeys hurled themselves energetically into the water from the soaring limestone karsts around us.

Elephant Hills is not all about the wildlife and adventure: there is an emphasis on relaxation too, and over at the Rainforest Camp, they take relaxation very seriously. We arrived by “long-tail” boat – the tuk-tuks of the water – past the famous ‘Three Friends’ limestone cliffs that jut imposingly out of the lake. Then, as the noise of the long-tail engine cut out, the Rainforest Camp came into view–ten mess-style tents floating on a wooden platform either side of a communal eating area.

With such a remote, peaceful location it’s impossible not to feel completely relaxed, a state only enhanced by the fact that children under 8 are not permitted to stay at this location. Total chilling is recommended: perhaps just a spot of swimming in the cool, clear lake before sunbathing to the sound of the water lapping below. You might be stirred by the smell of spices emanating from the floating kitchen. Like most of the meals, lunch is a communal affair of delicious, freshly cooked Thai food – stir fries, green and red curries, rice, pad thai noodles and plenty of it – always followed by chilled freshly cut fruit – pineapple, watermelon, papaya and coconut. After lunch, reinvigorated by our meal, we took turns leaping off the pontoon over and over again, with competitions for who could jump the highest or furthest. Plunging into the reviving blue water was a perfectly refreshing way to cool down on a hot jungle day, in the absence of any sneezing elephants.

Elephant Hills runs 2-4 day luxury adventure tours in and around the Khao Sok National Park and throughout Southern Thailand. Tours including activities and all meals start at around £350 per person.

For more glamping inspiration, check out our guide to Glamping in the UK and Europe.