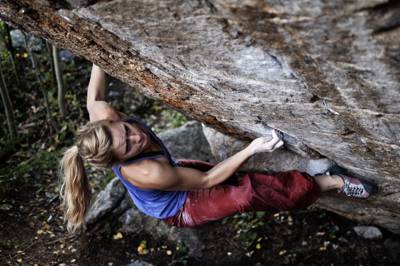 With legs burning from the steady climb out of town, I clamber over the first wooden style and set off across the fields, stumbling through the stoney mud towards Scout Scar. A damp mist has settled within the dips and troughs of the landscape and, into the blanket of white, a string of fellow runners are disappearing before me. Threaded through the bracken, as far as the mist reveals us, we canter along in a train through the Middle Earth-like setting. The beautifully rugged landscape could indeed be something out of Tolkein, though the unquestionable English-ness of it all is comically apparent every time a cow looms into view, grazing on the trailside.

Ordinarily, a race like this may merit a little attention – a few weeks of training perhaps and then a big day where it becomes the centre-point of the runner’s mind. Today however, it’s a mere side note. In fact, most people don’t seem aware it’s even happening. That’s because the slopes that begin to fall away beneath me, tumbling down in pockets of moss-covered rocks and banks of foot-print spattered greenery, are leading into the town of Kendal – home to the world’s biggest outdoor festival.

Taking over town every November for four days of all things outdoors, Kendal Mountain Festival is the throbbing heart of adventure in the UK. It’s not just the heritage of the Lake District that it can lay claim to but also the captive energy of over 10,000 visitors who arrive each year for their fix of outdoor fun. At its core are the films – 70 different stories screened throughout the weekend, all competing for 11 coveted awards. It’s pretty difficult to watch all during the time you’re there and, inevitably, painful decisions have to be made, but the diversity of the films and the tales they tell is staggering.

The melting pot of outdoor activities inevitably began with the climbing films. China Jam – in which three Frenchmen and a Belgian trek into one of the most isolated parts of China – enthralled an audience who watched specks of men on an icy rock face scale Kyzyl Asker, a 1,200m vertical pillar. Despite 14 nights hanging from the cliff, blizzards, frostbite and howling winds they still complete the feat with a banjo and xylophone on their backs, amusingly brought out every evening for a morale-boosting music session. This was just one of the many climbing films, with the category ultimately won by a story from across the pond. Sufferfest II featured many of the hallmarks of films throughout the festival: feather down jackets, mud-plastered faces, ripped-skin fingers and ‘rad’ Americans telling us all how ‘stoked’ they are. The sheer sense of fun conveyed, coupled with a serious amount of sportsmen’s suffering proved a worthy winning combination.

The high peaks and climbing lines stood in contrast to films like The Cave Connection – following underground adventurers exploring the grottos of New Zealand – or the slower pace of choices like Where Walking Took Me, and the selection of ‘Culture and Environment’ films. Skiing, snowboarding, kayaking, slack-lining, mountain biking, base jumping and running were all comprehensively covered, set against invigorating mountain backdrops and filmed by world-renowned directors. All seem crafted to both amaze but still inspire you, relating to an audience of fellow outdoor enthusiasts. If my run felt like somewhat of a mere side-note that morning, it certainly did by the time I had watched Kilian Jornet in Déjame Vivir battling his way to victory on Mount Elbrus – a Russian running course so savage there were just six entrants in the race, only two of whom actually finished.

No matter how gripping the films succeed in being, there is certainly a point where hours of staring at a screen wear thin. Splintering out from this core of the festival, then, is a whole host of other events and activities vying for your attention, not least talks from those at the forefront of the footage. Speed mountaineer Ulei Steck, who holds the record for scaling the North Face of the Eiger, popped in for an hour and a half of chit-chat fresh from the Himalayas, while famous mountaineers like Sir Chris Bonington and similarly speedy Chris Profit also entertained an audience in sites such as the Kendal Town Hall and the local school.

Just as with the films, speed and adrenaline were contrasted with more carefully-paced adventures, most notable a Sunday morning talk from Tim Cope, an Australian adventurer who spent three years on horseback retracing the ancient nomadic routes of Genghis Khan’s Mongolian empire. A life-changing trilogy of seasons saw him battle through summer sands, winter freezes and lush spring plains with his horses and trusty dog Tigon, finishing in Hungary and returning to a world drastically changed since his departure. His warmest tales were borne largely out of the hospitality he received along the way, living and breathing a nomadic life with some of the few remaining people on earth who continue to live this traditional existence.

Other clusters of activity generally focused around the towns Brewery Arts Centre, aptly re-named the festival ‘base camp’, where tents in the car park played host to shopping, promotional stands and a free Himalayan breakfast come Saturday morning. Here a general buzz of visitors, flicking through their festival programme, could indulge in some of the fringe events, the photography competition or a collection of the year’s best mountain literature – part of the prestigious literary competition also announcing its winners that weekend.

The festival ends with re-screenings of those films that won the all-important awards, a high note to head home on. Those, like us, departing a little early, got to end by listening to the final speaker of the weekend, seating ourselves in a cinema room with the smell of the morning’s wild cooking demonstration still fresh in our nostrils. Dave Cornthwaite, an enthusiastic adventurer with a 'nothing’s impossible' attitude and self-deprecating sense of humour, talked us through his transformation from couch potato to record-setting wanderer. The same depressing ginger facial hair of a PlayStation-fixated 20 year-old suddenly appeared as the wily beard of an outdoorsmen as he skipped from skateboarding across Australia to swimming the Missouri River to paddleboarding the Mississippi to cycling the American coastline. His Say Yes More slogan and 'can-do' philosophy made him one of the most fitting speakers to end the event, leaving festival goers keen to head out into the surrounding Lakes rather than back home to work the next morning. It also made for a handy festival marketing ploy – Will we be back to Kendal next year? …unequivocally Yes.

For more information about Kendal Mountain Festival and a full list of the weekends film, art and literature winners visit their website.