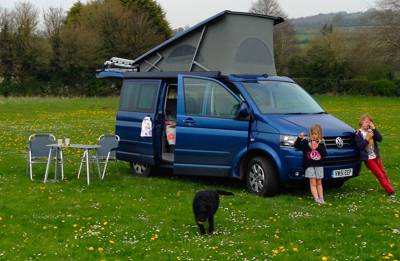 VW California campervan review – in praise of a modern icon

We put the latest VW campervan through its paces, and find it's the centre of attention

If you’re the shy, retiring type, it’s probably best not to invest in a Volkswagen California. It gets more attention in campsites and car parks than most z-list celebs do at the British Soap Awards.

We parked up in a quiet little harbour with seemingly few people around, but by the time we’d reached the water’s edge, a small huddle of onlookers were already gathering around the campervan, peering through the windows. So just what were they looking at?

Perhaps it was the compact little two-hob gas oven, with handy drawer and cupboard underneath; or the useful kitchen sink, with hot water on-tap? Were they eyeing up the impressive top-loading fridge, capable of chilling the morning’s breakfast milk (and of course that bottle of prosecco) in 20 minutes? Were they looking for the table, and chairs? If so, they’d be out of luck, with the table snuggly clipped into its slot inside the sliding door, and two deckchairs zipped tidily into the boot door.

The fact is, the VW California, like it’s predecessor the VW Campervan, is becoming an iconic part of the leisure landscape, with its own dedicated and committed fan base who covet the van and take any opportunity to get up close to one. The California may not have the distinctive curves of its 60s counterpart, but what it lacks in retro styling, it more than makes up for in clever, space-saving design. The chairs and table being stowed inside the doors is a good example; another table folds down in front of the kitchen cupboard, and the luxury 'captain’s' seats easily swing round from the driving cab to face the table – fairly unusual in smaller campervans.

An electric pop-top means that with the push of a button you can be stretched out for an afternoon nap within seconds of parking – a gentle breeze wafting through the zippable mozzie netting. And for those chilly nights, the California has its own little heating system that won’t flatten the battery.

These slick refinements all add up to a very comfortable experience. And the thoughtful, space-saving storage options make the cabin feel bigger than it is – a significant benefit if planning a longer trip.

Even though it’s only designed for four people, we managed to host a beach barbeque for four families and a selection of grandparents – the extra table was unzipped from the door and served as a bar, while salads were prepped in the sink. The hob-fired kettle provided us with a hastily prepared hot chocolate when the evening temperature suddenly dropped.

There are simple, practical details too. A vinyl floor is so much easier to sweep out than carpet, especially useful if you have a dog onboard. And the boot is plenty big enough for the luggage of an average family of four. It also has a shelf, making it much easier to access what you want easily without having to remove everything. Oh and did we mention the separate side cupboard in the boot for toiletry storage – complete with in-built vanity mirrors, of course.

For us – a family with four bicycles – easy bike storage is important, so the optional rear bicycle rack is an absolute winner. It’s neat, light and very easy to attach bikes to safely – so no need to worry that you might arrive at your destination having deposited one in the fast lane of the motorway.

The other major advantage with the California is that it drives more like a car than a big campervan. The power steering, top notch ABS brakes and nifty six-speed gearbox makes it as easy to drive and manoeuvre as a large family car. You really can nip around country lanes easily, and there’s plenty of acceleration for the boring parts of that long motorway drive. It can do up to 46 miles to the gallon, but the average is more like 35 to 40 mpg, which again is comparable to a large family car.

One word of warning – for an A-lister with all the blinging camping accessories, the California lacks a few vitals. It’s a surprise that it doesn’t have automatic wing mirror folding for parking on narrow country lanes. It also only has two seat belts in the back, meaning it can only ever legally take three passengers. Oh and the other gripe is a small but important one – no baskets in the storage cupboard. Regular campervanners will appreciate the key role baskets have to play in mobile food storage – clearing up spilt couscous from the corners of the cupboard is really no fun at all.

One final thing, do remember to shut the numerous blinds if you don’t want to feel like you’ve been 'papped'. Those VW campervan fans trying to sneak a peek are relentless.

For more on campervan hire in the UK, click here.