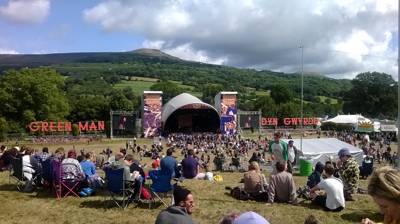 From its humble origins as a one day folk/psych freak out attracting just 300 Welsh hippies, Green Man Festival is now a staple of the summer festival calendar. And it isn't hard to see what draws the faithful to the sprawling grounds of the Glanusk Estate, for what is arguably the UK's (if not the world's) most magnificently-located music festival.

This year's lineup marks a bold step to the left field, with the more avant-garde fringes of alt-rock, ambient dance, and electronic sitting nicely alongside the more traditional elements emblematic of it's folky roots. But despite embracing the hipsters (Rough Trade even have their own pop-up record shop here), we're pleased to report that Green Man is still a world away from the increasingly homogenous, 'fe$tivals' that have become the norm of late. While others may talk the talk, Green Man is still refreshingly free spirited. There's no advertising hoardings, no armies of burly hi-vis-clad bouncers, or sponsored HD screens imploring punters to Tweet their festival selfies. Best of all, this refreshingly uncommercial ethos isn’t rammed down your throat – the Welsh don’t do sanctimony.

It's also extremely family-friendly, with plenty for the little folk including... erm... The Little Folk field, Wales' own NoFit State Circus, and Einstein's Garden for exploring the 'nature of science and the science of nature'. For the spiritualists, honeymooning couples, or simply those who don't fancy the festival showers (hot, free and immaculately clean, might we add), the Nature Nurture field is a peaceful haven of health and wellbeing where weary festival-goers can unwind, indulge and relax (wood-fired sauna anyone?). And when it comes to food and drink, festival cuisine has come a long way since the dodgy burger van and warm pint of cider. There's a delectable offering of world dishes and local producers onsite with everything from Goan fish curry to mac 'n' cheese, to Pembrokeshire lobster rolls to Spanish tapas and Glanusk-reared venison. For the casketeers, Green Man's Welsh Beer Festival hosts 99 real ales, ciders, and perries from a range of independent micro-brewers.

Camping-wise, the site doesn't feel like the canvas shanty towns we've come to accept at most festival sites. There's an orderliness to the site that makes pitching easy, while the mantra 'let's keep Green Man green' seems to do the trick as there's a notable lack of litter. For those wanting to bring just the bare essentials (we'll let you decide what they are), Tangerine Fields' pre-pitched tent village has everything from two man to spacious 15ft geo domes for four (all with comfy air mattresses). And with a setting as stunning as this, The Settler's Pass gives Green Man goers four extra days of camping action in this breathtakingly stunning of settings.

With five stages for the bands plus dozens of weird and wonderful entertainments, a haphazard stumble around is the best way to really soak up the experience. The site is pleasingly compact so, unlike a certain dairy farm in Somerset, there’s no schlepping miles through trench-foot-friendly mud. Come to think of it, we didn't experience much mud at all despite the peculiarly changeable Welsh micro-climate – well, we are in the mountains after all.

Green Man's central hub is the iconic Mountain Stage where the epic backdrop of the Black Mountains and the tiered grass terrace create a sun-kissed ampitheatre – the perfect arena for Jonathan Wilson's Friday afternoon slot, his dreamy melodies coming straight out of Laurel Canyon circa '69. Friday's find is undoubtedly the Bristol Afrobeat Project, whose madcap jazz and Fela Kuti rhythms works the packed-out Chai Wallah tent into a frenzy of shimmying and shaking. Across at the Far Out tent, Toy’s trippy Krautrock shoegazery offers a completely mesmeric foil to the shambolic jauntiness of Mac De Marco's slacker funk, culminating in the gap-toothed goofball diving from the lighting rig into the adoring throng below.

Saturday's lineup turns things up to 11, beginning with arguably the most hyped new band of the weekend. Cutting through the obtuse blips and bleeps of the festival's sizeable synth and sampler brigade, Fat White Family’s bellicose frontman Lias Saudi injects a welcome shot of Iggy-invoked adrenaline (plus partial nudity). Like The Cramps or Eighties Matchbox... doing doom(ier)-laden dirges, FWF’s gonzo South-London-scuzz reminds us what awaits us back down the M4. But with the sun shining on that sublime mountainscape, we staggered downhill to catch the close of Hamilton Leithauser. Better known as the frontman with latent New York quintet The Walkmen, Leithauser's voice is one of such graceful-gravel he makes Rod Stewart sound like Aled Jones. And lending his sandpaper strains to following act Sharon van Etten, their duet of 'Every Time the Sun Comes Up' seals an assured performance from the talented Jersey girl as, ironically enough, the sun descends for hotly-anticipated The War on Drugs. Their rousing Springsteenesque choruses and a soaring synth sound pilfered from mid 80s Brian Ferry really get the crowd moving, with the biggest roar of the night saved for recent single 'Red Eyes'. By the time enigmatic alt legends Mercury Rev take to their headliner slot to perform 1998's Deserter's Songs in its entirety, the stunning setting really comes into its own with ethereal opener 'Holes' heralding an awed hypnotic hush over the weekend's biggest crowd so far.

But it isn't just about the music at Green Man. The Cinedrome tent offers welcome solace from the occasional bluster (or for those of us who overdid it the previous evening at the Dental Disco) with screenings of cult classics and rock-docs. The Talking Shop tents boasts some proper gems, with grizzled A&R man James Endeacott's tales of excess with The Strokes and The Libertines well worth the visit. With Sunday's talking head-liner Howard Marks cancelling at the 11th hour, crowds spilled into and out of the tent for Gruff Rhys' intriguing, charming, funny musings on his ancestor's odyssey to discover a lost Welsh-speaking tribe 18th century America, the basis for his multimedia America Interior opus.

Back at The Mountain Stage, a black-clad Anna Calvi shreds on the telecaster, her operatic vocals and booming tribal drums on 'Suddenly' threatening to trigger landslides. While over at Chai Wallahs there's a ho-down going on courtesy of the high energy gypsy-Celtic tales of Scottish trio the Jon Langan Band. Fittingly, given that they were the blueprint for a whole host of Green Man's artists (most notably Friday's headliners Beirut), the Sunday night closing slot goes to erstwhile lo-fi legends Neutral Milk Hotel, whose seminal In the Aeroplane Over the Sea record gets the live airing many thought they'd never see. Over at the Far Out Tent, clean cut East Coast boys Real Estate impress with their infectious jangliness (not to mention typical US politeness with a "thanks Green Man" after every song – UK estate agents could learn a thing or two from this lot). Kurt Vile and The Violators close the show – the lank haired Philly native blowing us away with his screechy histrionics and the relentless motorik beat of epic closer 'Freak Train', before indulging the grateful crowd with a tender encore of 'Peeping Tomboy'.

For the grand finale, the titular 20ft effigy gets razed to the ground amid a spectacular display of fireworks. As those with the stamina decide between Feeling Gloomy's indie disco at The Walled Garden or Nemone from BBC 6 Music's Electric Ladyland set at The Far Out tent, we just offer our thanks to the enflamed jolly green giant, that in a world of increasingly identikit music festivals, this Welsh wonderland retains its singular sense of identity. And with a knack for nabbing the music world's most cutting edge acts, the future looks bright. The future looks green.


Early-bird tickets for Green Man 2015 have now sold out. Click this link for more information.

Tangerine Fields cater to over 20 major UK and European festivals. To find out more, see www.tangerinefields.co.uk.