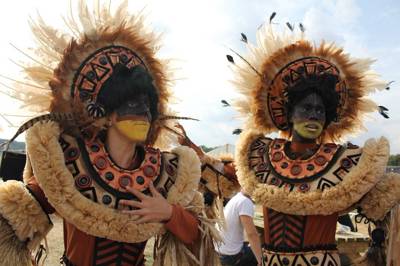 For a private little house party Standon Calling has gotten pretty out of hand! Indeed, ever since Alex Trenchard’s barbeque back in 2001 this annual affair has escalated to ever-higher heights. From a makeshift stage with local bands to today’s plethora of top musicians, the grounds of this Hertfordshire manor house have been transformed, becoming the place to go every August for a fresh round of boutique festival fun. Threaded through it all, however, remains a touch of that local garden party feel; a swimming pool for anyone and everyone to jump into, croquet on the top lawn and an old cowshed that’s been mucked out and spruced up into a nightclub, throbbing through the early hours until the sun reappears. Punching above its weight, Standon Calling can now claim to be a party where everyone is welcome, hosting a mix of recognisable names along with newer breakthrough musicians.

Friday night kicked off with a scintillating set from Frank Turner & The Sleeping Souls, someone with such depth through his albums that earlier songs like The Road could intertwine seamlessly with newer material to rise in a rock-‘n’-roll crescendo as the set progressed. By the end, the entire festival crowd were at his beck and call, revelling in the meadow that spreads out beyond the main stage.

Saturday’s top slot was filled by Public Enemy, one of the first hip-hop groups to hit the festival scene and a band that still retain their straight talking lyrics and raw honesty. Some of it, perhaps, fell a little on deaf ears, their clanging rap about ‘Dr Murray’ that followed a long Michael Jackson-loving preach failing to make much impact on the British-countryside crowd. Yet by the end, they too could claim one of the biggest crowds of the weekend, bobbing around to old classics like Fight the Power and Harder Than you Think.

The real pleasure at these smaller boutique festivals, however, lies in discovering those on the cusp of mainstream success and with names like Mumford & Sons and Florence & The Machine on their old billboards, it’s clear Standon Calling has an eye for picking out the best. Recent chart-toppers Clean Bandit thrilled the crowd with their fusion of classical strings and dancey pop beats, while local girl Charlie XCX got a young audience thumping along as she leaped around the stage. Pleasant surprises coming from the earlier afternoon slots included two from Nottingham; soulful quintet Amber Run on the main stage and singer songwriter Saint Raymond in The Big Top, an atmospheric setting regardless of the music.

Standon Calling offers far more than just tunes, though, and its boutique credentials are testament to the endless list of other things going on. Arty workshops, comedy booths and a scattering of dramatic activities are all encompassed under the yearly theme, this summer ‘Lost in Latin America’. Mexican wrestling and tango courses entertained revelers who donned their best fancy dress on the Saturday, winding around the site in an afternoon carnival to end at the main stage where costume winners were announced. Amongst them were face-painted kids charging about in sombreros, a signature sign that they’d spent a morning immersed in Bambino Banditos, the children's craft area in a quiet corner of the manor house gardens.

In fact, Standon Calling has some of the best ratings around as a family festival. A designated family camping area boasts a very separate location from the more clustered main camping field, a riverside meadow that has been cleared of the local cows. Toilets throughout all areas are remarkable – proper flushing loos that are clean enough you’ll actually sit down on them and a shower block with hot water – top notch for the UK festival scene! Kids and adults alike could enjoy the safe, local atmosphere of the festival and the chance to run around with out endless worrying.

Beyond the interwoven guy ropes of acres of normal tents lies the boutique camping area, a real treat for those willing to splash their extra latino dollar. Options are plentiful, with yurts, tipis, bell tents and vintage airstream caravans, all of which have access to exclusive toilets and showers. Kitted out with serious comfort in mind, glamping here offers some of the most high-end luxury on the festival circuit and campers can really tailor it to their style and price range by picking from basic glamping packages up to the highest spec VIP pitches. Those with motor homes can also pull up in the camper van area where electricity hook-up is even available at an extra cost.

Whatever camping you chose, you’ll never be too far from the main festival area with a layout that seems to make everything close at hand without becoming too overcrowded. The route from your tent to the bubble of themed fantasy is via tempting food and drink vans. Grab your choice of food, head to the main stage and sit for the afternoon bands, enjoying the thoroughly laid back atmosphere that is accentuated on Sundays by the dazed majority who are catching a kip in the sun. By evening, the energy seemed to have returned however, as heads bobbed and hips wiggled along with charismatic Paul Smith, lead singer of Maximo Park who closed off the festival with songs old and new, inevitably ending with Apply Some Pressure and Girls Who Play Guitars.

The slamming of their final chords closed the curtain on another year of quirky Standon success. Breakthrough acts had threatened the main headliners who in turn had drawn the masses with their experience and fine-tuned sound. Cast amid the vibrant colour of a world lost in Latin America, this little house party has once again stepped another rung up the festival ladder.