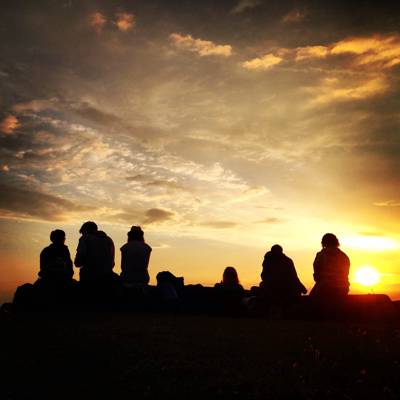 Breaking the 9 to 5 with an easy midweek adventure

Spend too much time in an office? You need some microadventure in your life, says James Warner Smith

The problem with flicking through the Cool Camping books or browsing around the website is that it makes you want to get out there and get out there now. The visual bombardment of twilight fires and woodland campsites that accompany day-to-day internet procrastination gives many of us who are office-bound an unquenchable thirst for adventure. But why let that thirst go unquenched? What's really stopping you from closing the laptop and hitting the road?

Ah, well, for starters there’s the money thing; the bills to pay and the mouths to feed. After that it's more a matter of time; committing days to escape the workplace, organising camping gear, finding a site with space, making travel arrangements… we’d all love to be roaming 18th century explorers but the world’s just not like that anymore.

Yet modern life should not be a barrier to the basic spirit of adventure, defined in the Oxford English Dictionary as, “an unusual, exciting and daring experience”. There’s nothing in there about month-long cycle journeys or scaling the summit of Everest. Adventure can be fleeting, simple and right on your doorstep. Amid a busy life you can still have a micro adventure.

The concept of a microadventure is nothing new, though it has certainly blossomed recently, pioneered by National Geographic’s Adventurer of the Year Alastair Humphreys. Despite rowing the Atlantic, running across deserts and trekking through the arctic, Humphreys has realised that escaping the workaday lifestyle is not about distance, it’s a simple change of mindset. Rallying friends around him, he has turned eyes away from Himalayan peaks to the UK countryside and ditched the expedition paraphernalia for nothing but a sleeping bag. Caught in the crossfire, I too left my tent in the attic and headed off to meet another adventure veteran; Anna McNuff, someone with all the explorer credentials but a day-to-day job just like the rest of us. She’s been heading out during the week to micro-adventure in every county touching London, roping along her budding blog subscribers to enjoy the ride.

So there I stood, amongst the bustling rush hour crowd at Marylebone Station waiting for people who looked suitably rugged to appear from the masses. By 7pm I was boarding a train for Buckinghamshire with a team of seven strangers all prepared to be unprepared. We carried waterproofs, sleeping bags and a picnic - the sort of stuff that takes minimal time and effort, exactly the point of this one night escapade.

Just 35 minutes from central London we stepped from the train into Princes Risborough, a small village on the edge of the Chilterns, where rain pattered the roofs and fellow commuters headed to the dry comfort of their homes. Donning our hoods, we wandered from the houses along the Ridgeway, one of the oldest footpaths in the country. Walking, talking and gradually ascending a tree-lined path to a grassy slope beyond, we worked our way to a lookout point where the spattering of rain drops dissipated into the distance, rolling across the patchwork of fields that spread out to the horizon. As we re-emerged from another flank of trees we found ourselves at the crest of the hill where a large open space cried out for us to sit down, grab a sandwich and watch the sun set. So, marred only by the black scorch mark of someone’s old campfire, we sat in our scenic hilltop spot and began to munch our dinner. The working day was now miles behind us, in all respects, and while we condemned the irresponsible pyromaniacs who had scarred the grass, we were all secretly thinking the same thing. Indeed one of us, not so secretly, was already off in the woods collecting branches.

A short while later, the campfire’s glowing, the coffee’s brewing and we while away the evening hours roasting Percy Pigs on the fire. Below, the lights of the village begin to sparkle from every window – and the sensible reader may rightfully ask, ‘why would you sleep on a hill when your cosy bedroom is just around the corner?’ But bedrooms, despite the luxury they afford, are there tomorrow night and indeed every night. Why always return to the same old spot when it’s so easy to mix it up and have a small-time adventure amongst the day-to-day humdrum of working in the city? The only thing that’s actually difficult is getting up and doing it.

We stomped the glowing embers into the ground and disappeared toward the trees to find a sheltered spot away from the next day's early-morning dog walkers. Roll mats down and sleeping bags out, we were ready, the beds neatly laid out in our room with a view. Curled up on the woodland floor, our seven blanketed bodies drifted away beneath the canopy as the night-time mist floated in around us.

By 9 o’clock the next morning I was back in the office as usual, an early rise, roll back down the hill and speedy train journey to London all under my belt. The microadventure had been, well, micro, and it was over. What remained was the refreshing feel of an unusual mid-week break and the smell of wood smoke embedded in my clothes. The ease, however, with which the escapade had integrated into a working week shows that anyone can do it. You don’t need endless time and money to enjoy a little local exploring and you don’t need to live in the snowy tundra of Northern Canada. If you’re desperate for toilets or showers then there are plenty of campsites on the edge of the capital and tiny sites around the UK that provide a wilderness feel with a couple of amenities thrown in. But shove the planning, keep it simple and make it happen. The first step to a microadventure is stepping out to do it. After that, it’s really not so hard.

Follow Anna McNuff's Blog as she continues to microadventure around London or find out more about microadventures from Alastair Humphreys' website and his new book 'Microadventures: Local Discoveries for Great Escapes' (William Collins; £16.99)