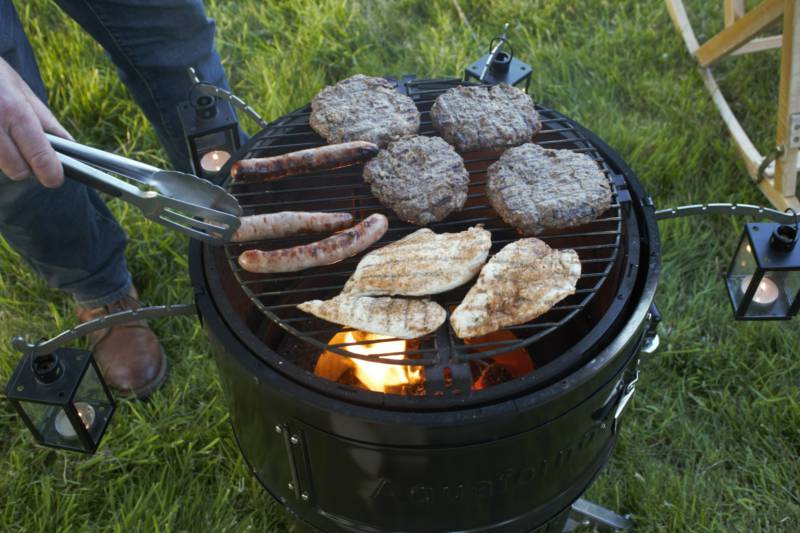 The award-winning Aquaforno is a pop up pizza oven, BBQ grill and water heater, all packaged up in a unique design that makes it portable enough to take camping. Here we review the second generation version, the Aquaforno II.

Cooking at camp is something I’ve never been able to fully master or enjoy. It’s all the fiddly prep that takes the fun out of it, like finding everything needed just to boil some pasta: ‘Where’s the gas burner? Is this one the broken one or the one that works? Where’s the metal bit that fell off last time? Is it in the car? Have you seen the gas canister? Is this the one that fits the right stove? I think it’s empty. I can’t really tell by shaking it – yeah I think there’s some left; no it’s empty. I’ll have to pop to the shops…’ It really can take an hour or more to be ready to cook something that takes 10 minutes.

I guess my aversion to intricate cooking faff is partly due to my rather basic preferred approach to cooking: light a fire, cook food over the fire, eat it. And let’s face it, when you’re camping, keeping it simple is often the best option. So the idea of having just one piece of kit for everything is music to my ears. And the fact that it involves real fire rather than fiddly canisters is an added bonus. So I jumped at the chance to have a go with the Aquaforno II.

The Aquaforno II arrived in a good quality padded bag, a neat way to keep it all together and also protect the car from errant ash and soot after a camping trip. The bag has backpack-style straps, but I’m not sure I would want to carry it far on my back. In fact I was a bit surprised by the weight of it, being heavier than I expected. But I soon worked out that the heavy pizza stone came with a separate carry bag, so could be easily removed from the main bag to make for easier carrying. 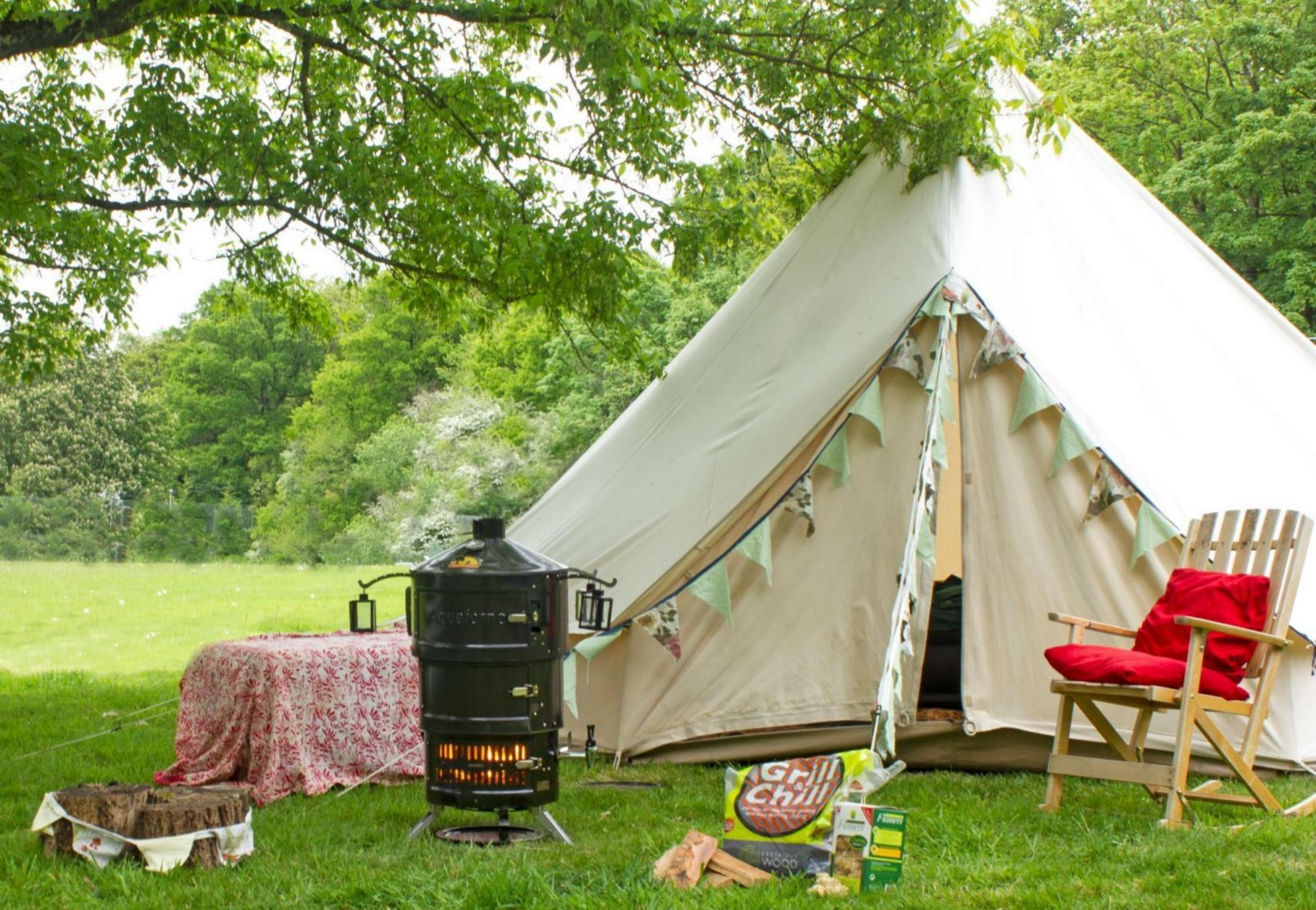 What I really love about the Aquaforno II is the super-easy way it goes from ‘in the bag’ to ‘look at this impressive piece of kit I’ve built!’. The three legs pop up (with easy adjustments if the ground is uneven), then the three main sections are just lifted out of their collapsed, telescopic stowing position and clicked in place. The water tank then gets placed into position (no screws or fixing to worry about), and the water tap is screwed onto it, but it’s not remotely fiddly. Then all that remains is to place the fire grill, BBQ grill and pizza stone onto the allotted shelves, then the lid goes on. Done. It’s ridiculously easy – but the end product looks impressive enough to gain maximum kudos for your efforts. You’ll need to be prepared for lots of attention from fellow campers – it’s just as good as a conversation starter as it is for cooking burgers!

The unit essentially comprises of three sections. The lower section is for the fire (wood or charcoal) and the water tank is also in that section for quick heating. The middle section is the BBQ grill, and the oven is at the top.

We first tested the Aquaforno II with homemade lamburgers and barbecued veg. The grill is quite close to the fire beneath so we had to wait for the fire to die right down before we could cook without burning the burgers. Of course, temperature control is key to a successful BBQ, but given the compactness of the fire section and the grill directly above, we found that we had to be more involved than usual in the fine-tuning of the wood positioning to regulate the temperature. (We now only use wood when cooking in the oven and charcoal when using the grill, and that seems to work better). If not using the oven though, you can switch the grill to the upper section and that works a lot better – in fact that’s essential for cooking things like chicken on the bone where you need a longer, more even cooking time. So it’s useful to have the flexibility to do that.

The other thing we noticed was that we just about had enough space on the grill to cook for the family. Cooking for a larger party on the grill would involve a rotating selection of food being cooked, and not everyone getting their food at the same time – not really a problem on a relaxed camping trip of course, but worth pointing out if you plan to use the Aquaforno II for larger groups. 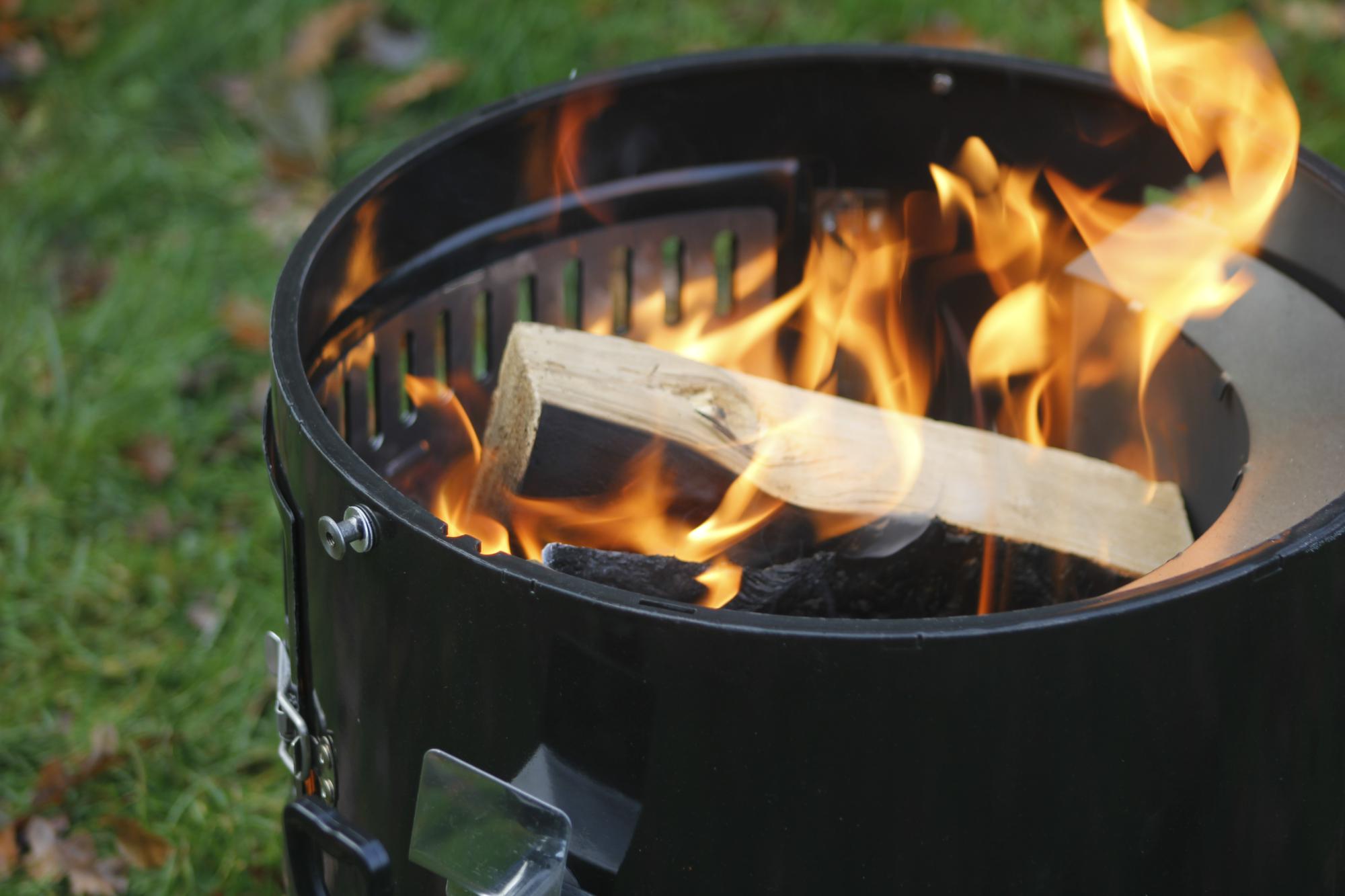 Next test for the Aquaforno II was to get the pizza oven fired up, and what a luxury to have stone-baked pizzas at camp. It’s a really fun and easy thing to do: you can bring home-made pizza dough, and everyone can just press out their own base and throw on the toppings they want before they go in the oven. For best results, the oven needs to get up to 370 degrees or more so that the pizzas go on the stone for just a few minutes and end up with that crispy stone-baked texture underneath and bubbling with cheesy gooeyness on top. On the first attempt we struggled to get the temperature much higher than 300 degrees because we were using oily, slightly damp logs. It was still hot enough to cook pizzas though, they just took a few minutes longer. On the second attempt we used kiln dried wood and the oven got much hotter more quickly. (There’s a handy temperature gauge on the oven so you can see when it’s hot enough). After 20 minutes we were ready to cook – the stone just needs a quick wipe with a damp cloth then the pizzas can go straight on. You really need a pizza peel to make for quick and easy extraction of pizza at just the right time. It also helps you look the part too; the bigger the pizza peel the more accomplished you’ll appear! I was surprised at how ‘pizzeria’ they tasted, even with my basic cooking skills. The fast, hot cooking on the stone gives the pizzas a texture you just can’t get in a standard oven, and the smokiness of the kiln-dried wood adds flavour too.

We’ve since cooked a variety of other dishes on the Aquaforno II including tandoori chicken, a one-pot roast with veg and halloumi, and good old BBQ sausages. It’s versatile and easy to use, and really adds a new dimension to the usual things you can cook on a grill at camp. Using an oven dish for a one-pot roast is particularly handy as once everything is all chopped up and in the dish it can just be left to gently cook while you get on with relaxing. We’ve not tried smoking anything yet, but the barrel design lends itself perfectly to smoking meat and fish, so that’s one to try for the future.

The water tank feature is also useful. The tank is plenty big enough to fill up a cafetiere of coffee, but you’re unlikely to want to fire up the whole oven just for a brew, so it’s very much a handy thing if you fancy a coffee while you are using the Aquaforno anyway. The other thing to bear in mind is that if you just fill the water tank and forget about it, by the time you want to use the tap, the water may have all evaporated, so it is something you’ll need to keep on top of it if you expect a constant supply of hot water.

All in all, the Aquaforno II is a very accomplished and versatile piece of kit that will expand your camping recipe repertoire no end. You’ll be able to experiment with new dishes, or just cook your old favourites. And with the extras like the water tank, pizza stone and cloth drying attachments, it does so much more than a standard camping cooker or BBQ. Above all, it’s great fun and something of a centrepiece at camp. So make room in the car for this neat little contraption with big ideas. You may never need another gas canister again. 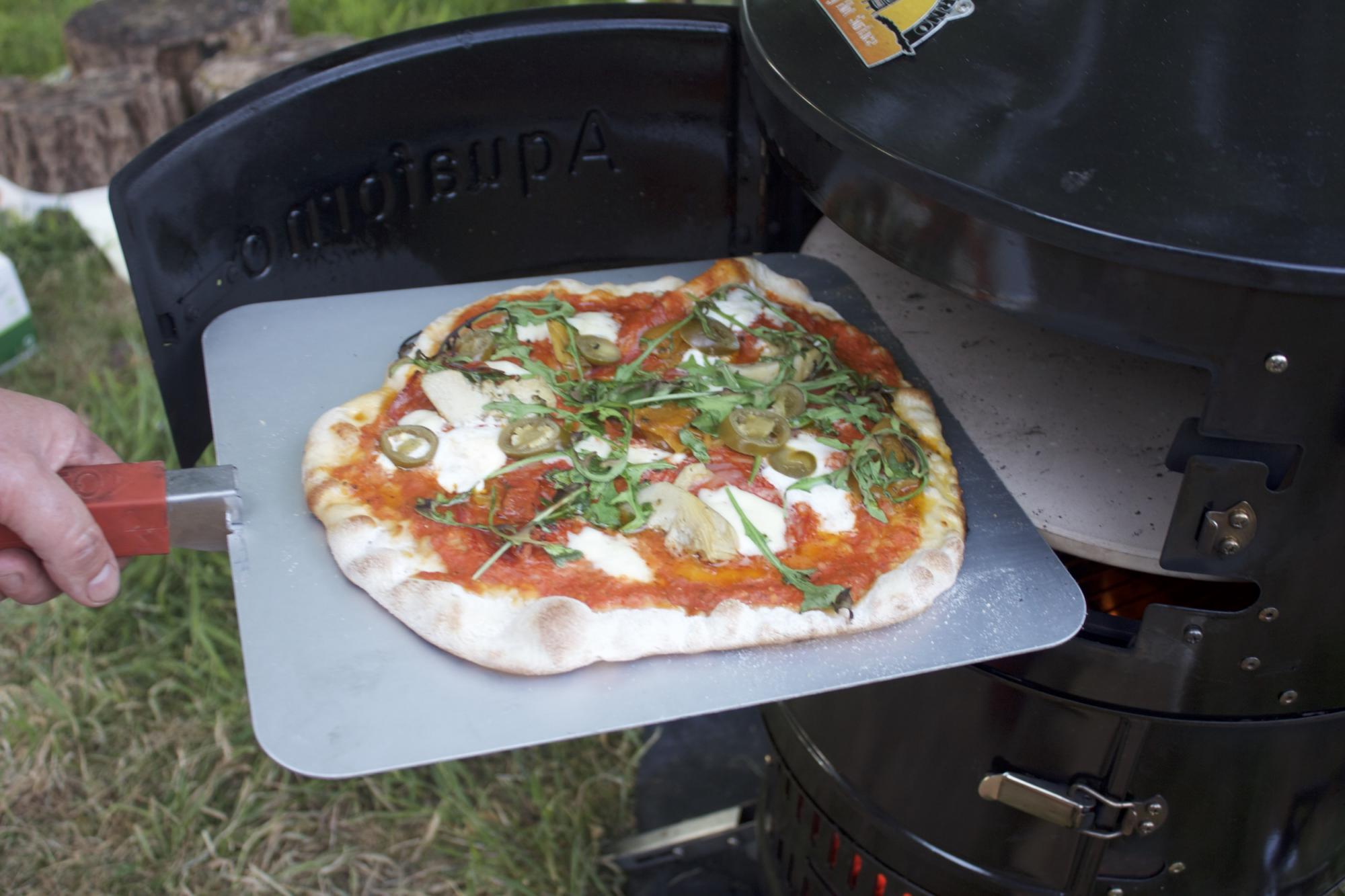 Make sure you have a pizza press. Pizzas are hard to keep in one piece without one.

£50 off for Cool Camping customers

The Aquaforno II is available at aquaforno.com priced at £395 with free UK mainland delivery. During July 2020 Cool Camping customers can get £50 off. Just use code 'Cool 2020' when purchasing at aquaforno.com

Reviewed by Jonathan Knight. Cool Camping were provided with an Aquaforno test product free of charge but were not paid for this review; opinions are our own.