Worldwide Camping Index: The best countries for camping around the world

With the new year upon us it’s time to start planning your camping adventures for 2020. So where will the new year take you?

Our new Worldwide Camping Index has ranked the best destinations around the world for exploring the countryside and camping in the wilderness, based on a detailed analysis of factors including stargazing, scenery, diversity of wildlife and the risk of natural disasters, to provide a comprehensive and inspirational guide to the best places around the world for camping – from some of the most popular spots to some more under-the-radar destinations.

Coming out in the top spot as the best country for camping is Canada, which our research found to be the best camping destination in the world due to its high potential for stargazing, number of national parks, low pollution, low risk of natural disasters and beautiful scenery. Other popular countries for camping that ranked in the top ten include the USA, Australia and Norway. Elsewhere, more alternative destinations rated highly include Brazil, which scored well for its vibrant wildlife biodiversity, number of national parks, forest area, natural resources and opportunity for stargazing.

Read on below for the full results of our Worldwide Camping Index. 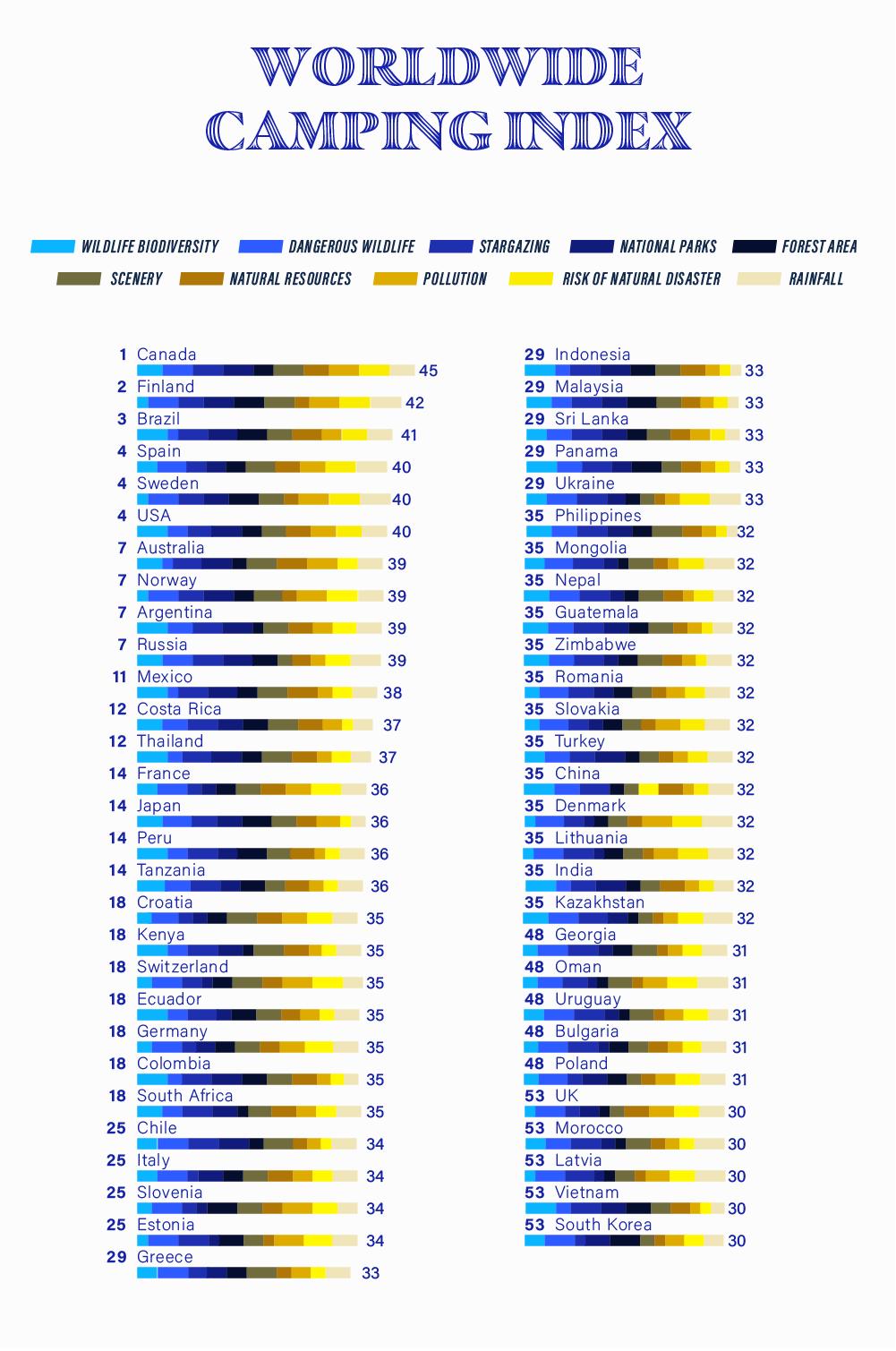 Whether you want to go long haul in 2020 or plan to go camping closer to home, the result show a fantastic spread of camping opportunities around the globe. Wherever you're located, there's a good chance there'll be somewhere exciting to camp nearby.

Different factors bring different strengths and weaknesses to various countries – be it biodiversity in Brazil or the stunning mountain scenery in Switzerland. Some, like Canada, Spain, Australia and the Scandinavian countries are no surprise to find in the top 10 places to camp in the world, but other high-ranking spots, like Brazil, Argentina and Russia show that there are some fantastic camping opportunities to be had beyond the most common countries that spring to mind. From the banks of the river Uruguay in Argentina to Bahia’s beaches in Brazil, camping in South America is on the rise and our data suggests it's all for good reason, with six South American countries inside the top 20.

In 53rd position, the UK falls just outside the top 50 countries to camp in the world. While the UK scored well for its low number of dangerous animals and risk of natural disasters, it was beaten elsewhere by greater wildlife biodiversity and the amount of forest cover on offer for woodland camping. Some may be surprised to find that rainfall figures were not a huge negative in comparison with other high-ranking countries!

In all, a wide ranging number of factors have been taken into account. Our Worldwide Camping Index analysed the following elements: 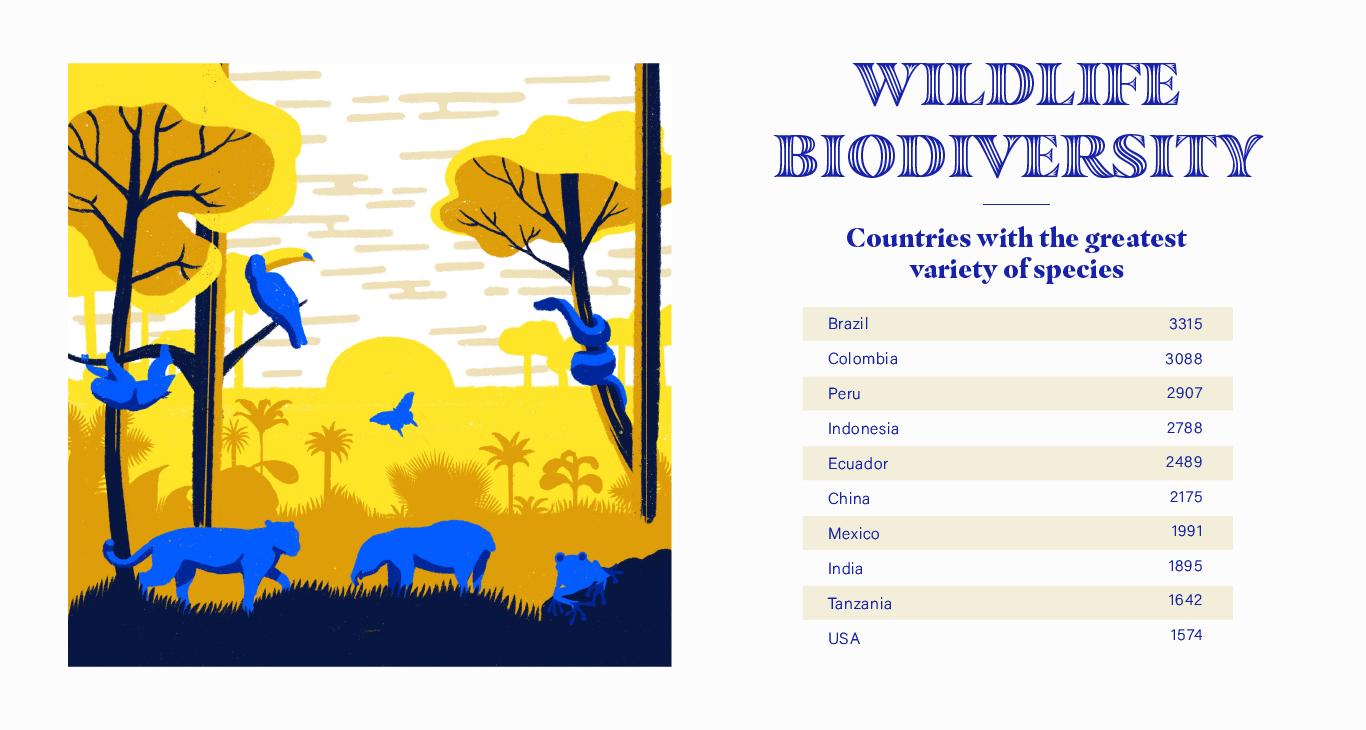 One element to consider when finding the perfect place to camp in the world is the wildlife diversity of a country. One of the most exciting parts about camping in the wilderness is being able to see and even interact with the country’s unique wildlife. The score took into account the total amount of species in a country including mammals, bird and amphibians. Brazil raced to the top spot with an amazing count of 3,315 species within the country. This comes as no surprise with Brazil being home to one of the biggest ecological powerhouses in the world, the Amazon rainforest. Colombia and Peru came a close 2nd and 3rd with 3,088 and 2,907 species. Interestingly all three of the top destinations in this categories were countries in South America. 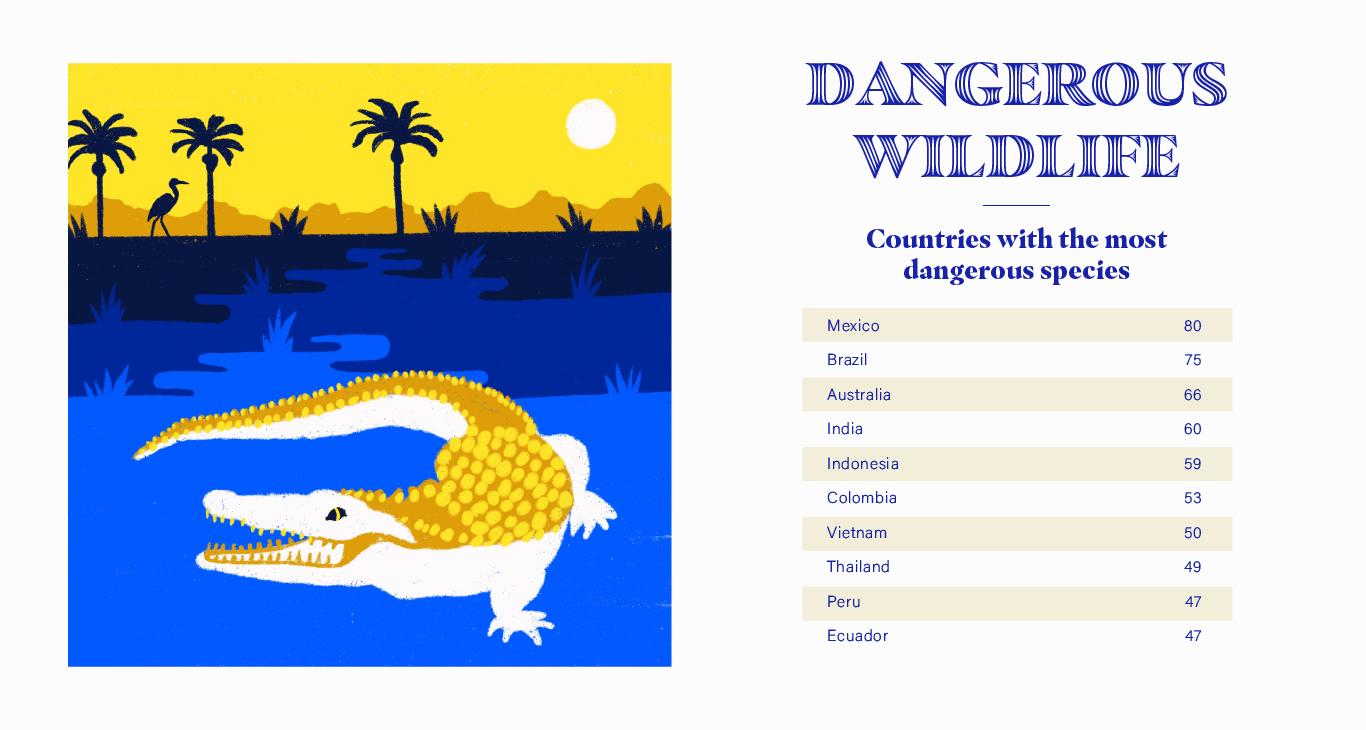 Although adventurers value the wildlife diversity of where they choose to camp, it’s also important to take into account how many of these animals can cause you harm. We found out the number of venomous animals in each country that could cause death to humans. Unsurprisingly Mexico has the most dangerous species with 80 animals that are known to have killed humans. Mexico is home to many poisonous animals, with 92% of the world’s rattlesnakes calling the country home. Known widely as one of the most dangerous countries in the world, Australia reached the top three with 66 venomous species. The red country contains the funnel-web spider, considered to be one of the most dangerous spiders in the world. You won’t want to meet one of those while out camping. Meanwhile, the safest countries if you’re worried about any creepy critters include Denmark, Norway, Poland, the UK and other such European countries where the number of venomous animals is low. The countries with less dangerous animals were scored higher in our index. 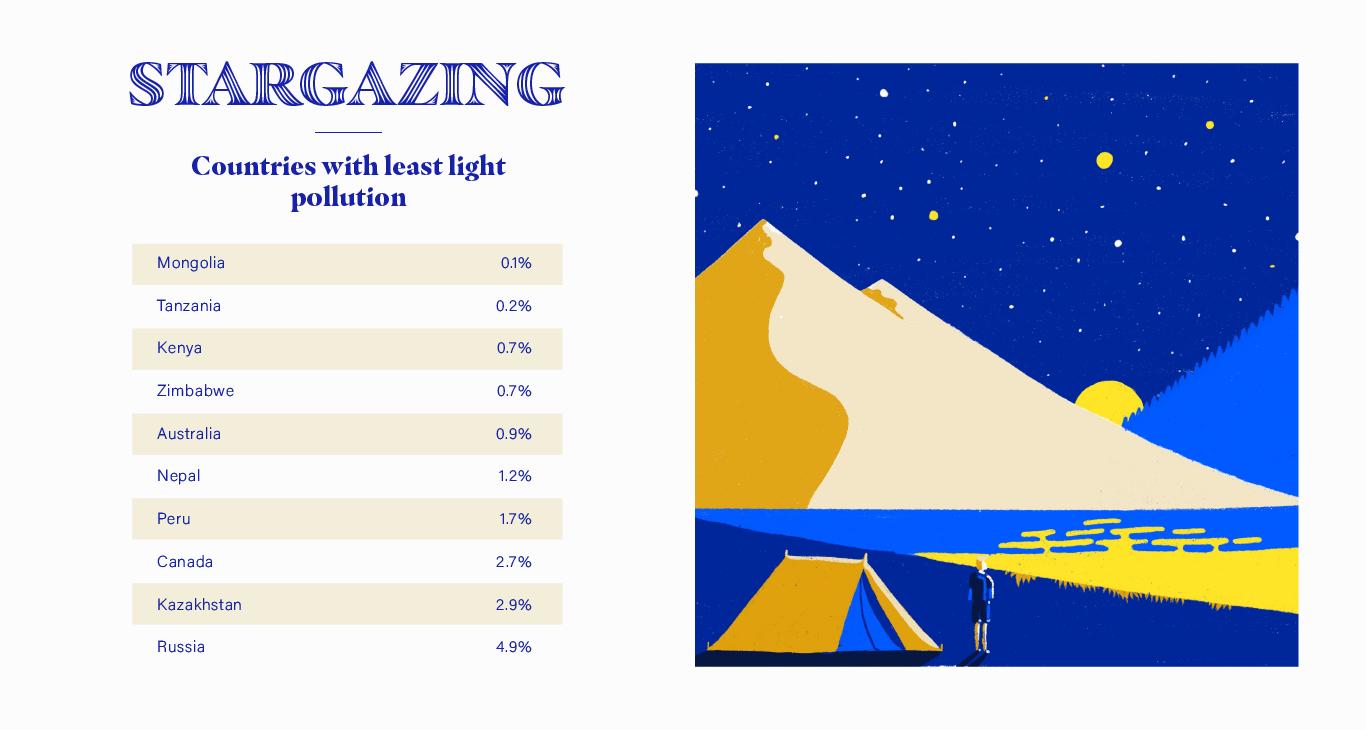 Of course, camping is about so much more than wildlife alone. Another of the greatest parts of camping is the joy of stargazing. With cities ever-growing and more and more infrastructure taking over the countryside, it’s become much harder to find places to camp that aren’t riddled with light pollution. For this category, countries with larger expanses and a lower human population came out on top with more places to stargaze, due to having darker skies clear from light pollution. Mongolia has the least light pollution with only 0.01% providing an almost guaranteed chance of spotting Orion or Ursa Major. With only five people per mi² there’s ample opportunity to find privacy, pitch a tent and spend your evenings exploring hidden constellations. Tanzania came second with 0.2%, while Kenya and Zimbabwe both have 0.7% proving a strong case for camping in Africa, just watch out for the Big Five. 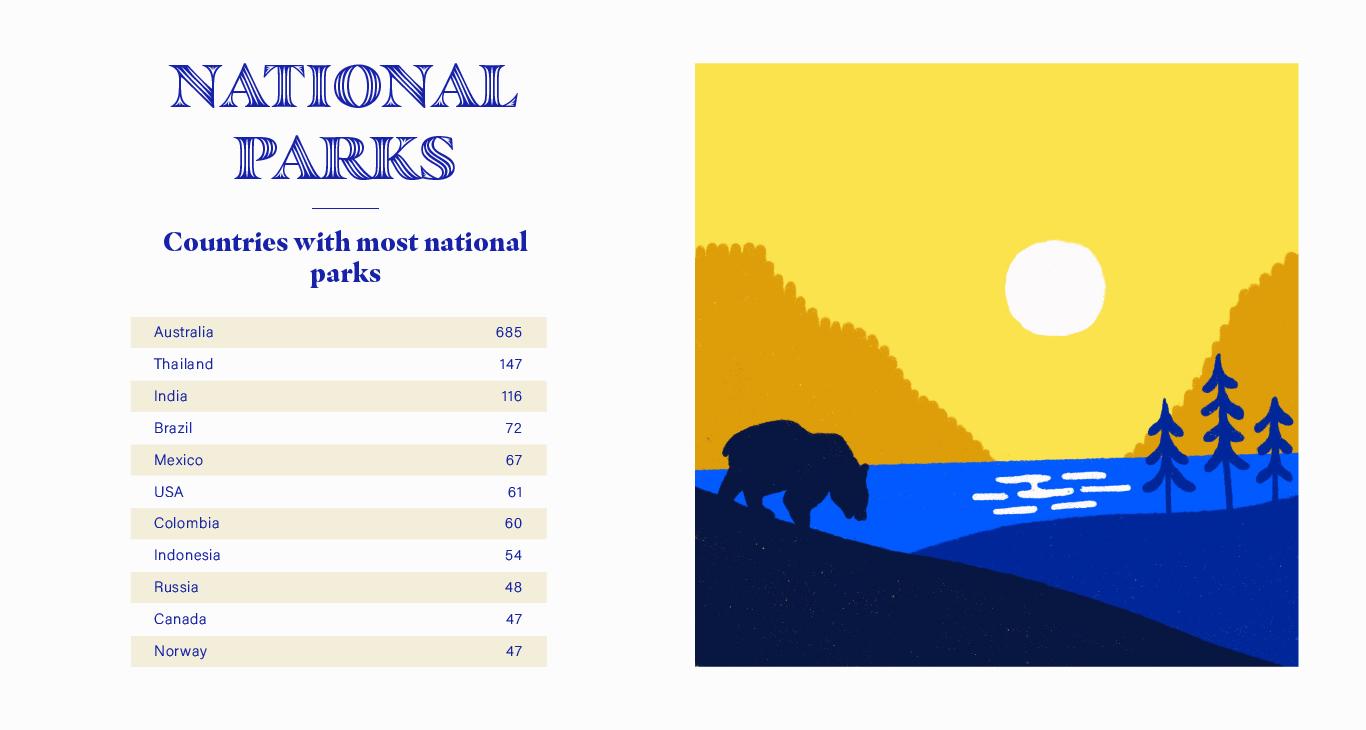 Who doesn’t love to explore a good national park when they’re out in the sticks camping? Unfortunately, not all countries value their open spaces, and some don’t have a single national park to their name. Some national parks welcome wild camping, allowing budding travellers to be at one with nature and camp without hordes of tourists. Australia came out on top with over four times the amount of any other country with a staggering 685 national parks. This can be explained to some extent due to the country’s expansive size, but this only provides campers with further choice. Australia’s largest national park Kakadu is an incredible 20,000 km2 in size, larger than the entirety of Fiji. Thailand came second with 147 national parks to its name and India 3rd with 116. 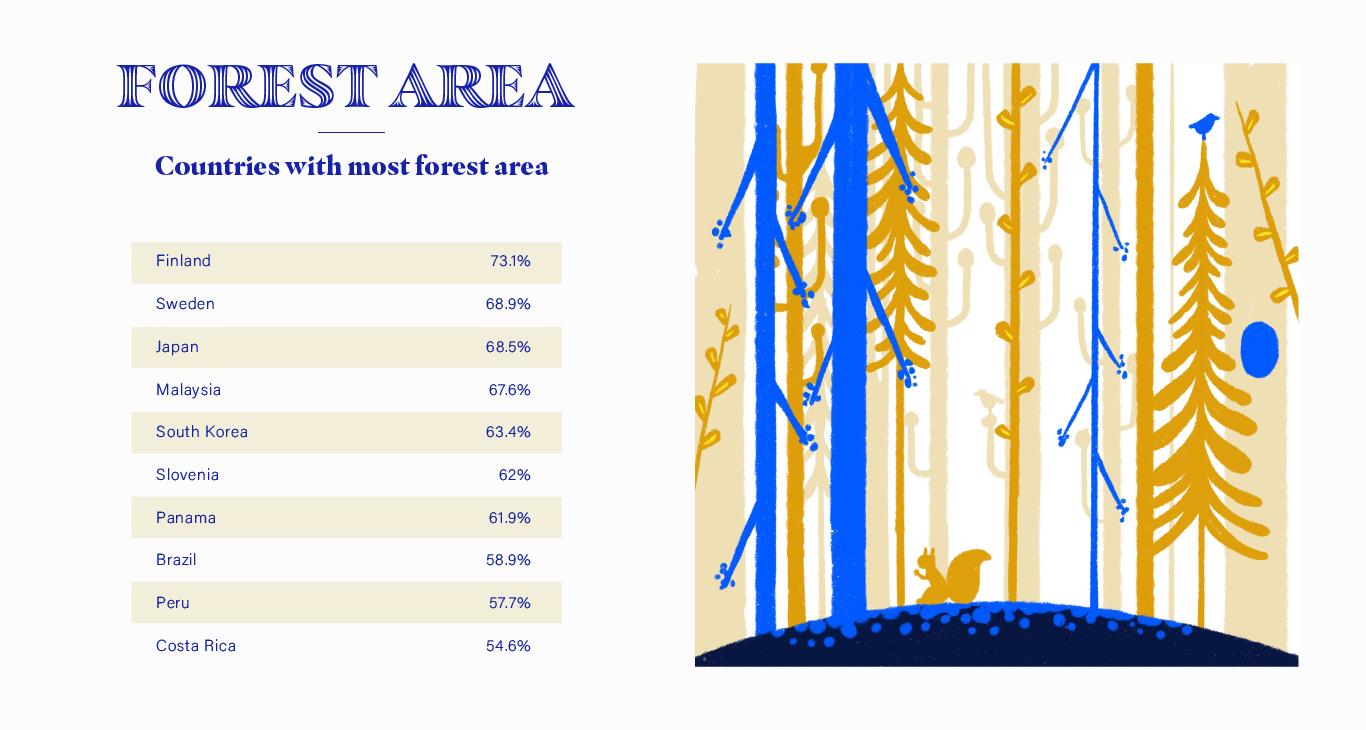 Camping in a forest not only shields you from the elements but also offers you the chance to embrace and reconnect with nature. Forests tend to offer the best chances of seeing native wildlife and can provide additional activities for more adventurous campers. Finland has the highest forest area with an incredible 73.1% of the country covered in luscious forest. One of the most popular places to camp in Finland is Petkeljärvi National Park, a place covered in ancient pine and broken up by beautiful lakes. The forested areas provide a great place for hiking and forest activities. In second place is Sweden with a forest area of 68.9% and Japan a close third with 68.5% of the country covered with forest. 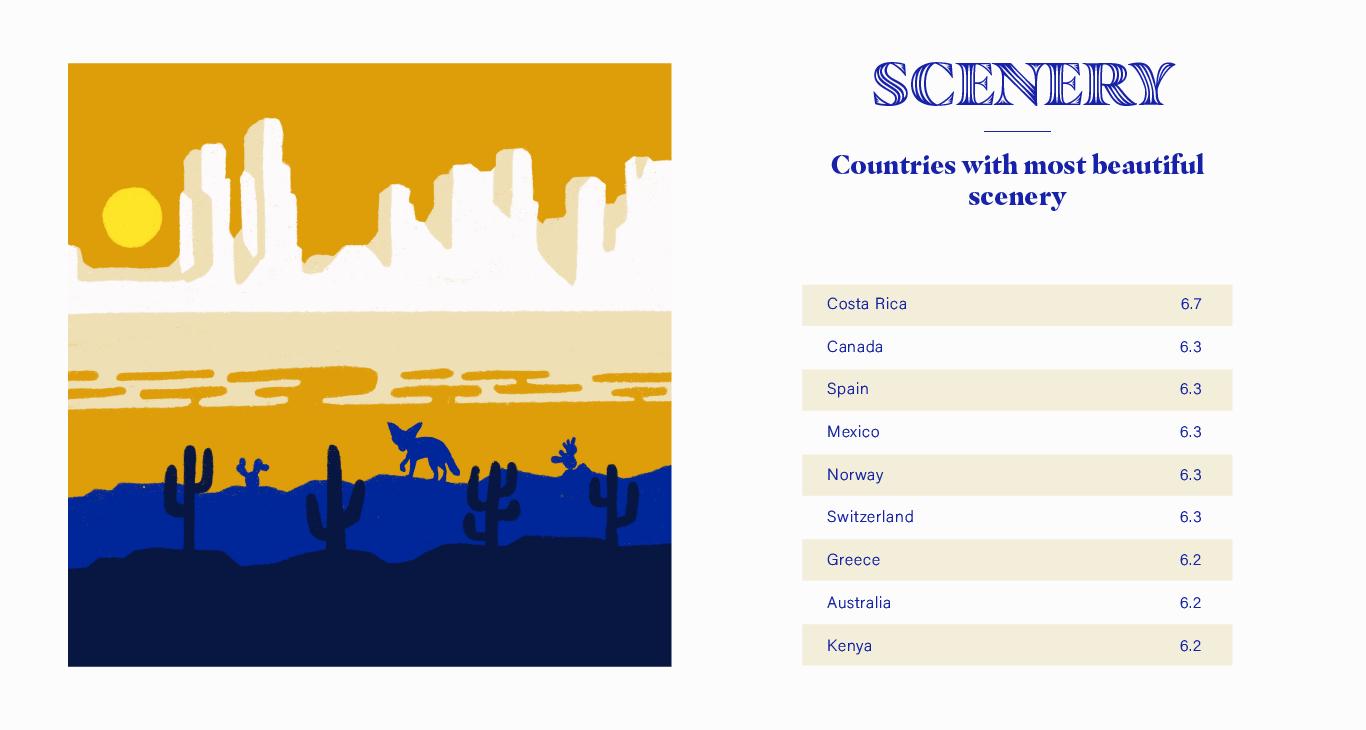 Nothing beats gorgeous surroundings when you’re camping. That’s why we’ve included this important factor in our Worldwide Camping Index. You could be in one of the safest places in the world with a bunch of colourful and gorgeous wildlife but if the scenery is not up to scratch is there any point in being there? We ranked the countries for their attractiveness of natural assets which include parks, beaches and mountains to find that Costa Rica won the top spot with a score of 6.7. This diverse country is home to vibrant blue lakes, thick jungle areas and majestic mountains reaching towards the sky. There’s no doubt that wherever you decide to camp in this country, you’ll be blown away by its breathtaking beauty. 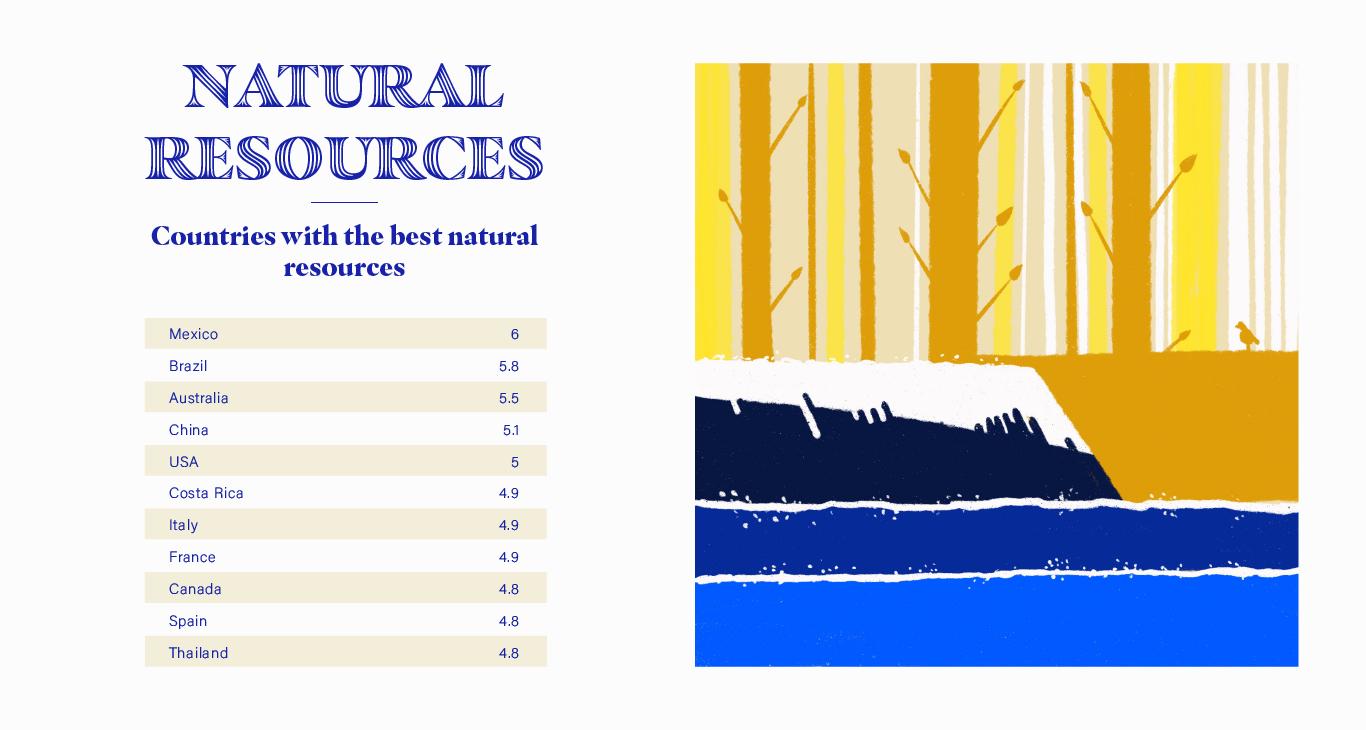 The quality of a country’s natural resources will always be an important factor for a destination that is great to camp in. This includes the availability of natural assets, the richness of the fauna and landscape as well as the development of outdoor tourism activities. Mexico ranked in the top spot with a natural resource score of six with tourism in the country continually growing over the past couple of years leading to the development of tourism infrastructure and activities. Brazil and Australia came 2nd and 3rd with scores of 5.8 and 5.5. We know from our analysis of the national parks in each country that Australia has the most in the world, leading to a high natural resources score. 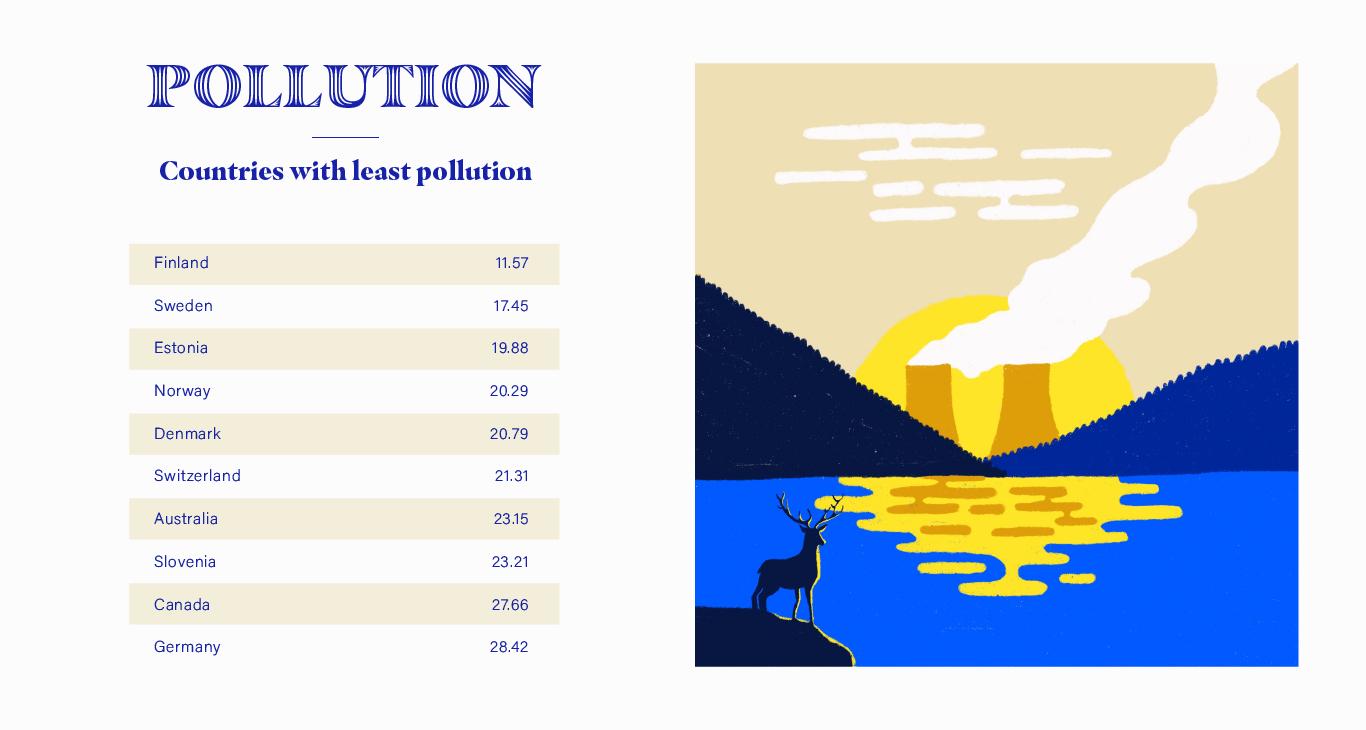 In recent years the issue of pollution has become an ever increasing concern, and something to take into account when choosing a place where you’ll spend the majority of your time outdoors. You’ll be out in the open and won’t have the protection of a hotel building to shield you, making it dangerous to camp in a place that has high pollution levels. Finland came first again in this area with the least amount of pollution across all countries with a pollution index score of 11.57. Sweden also came high with a score of 17.25. It’s no surprise that these Nordic countries offer the least amount of pollution as their electricity is made in an environmentally friendly manner and they’re situated far from big sources of emissions. 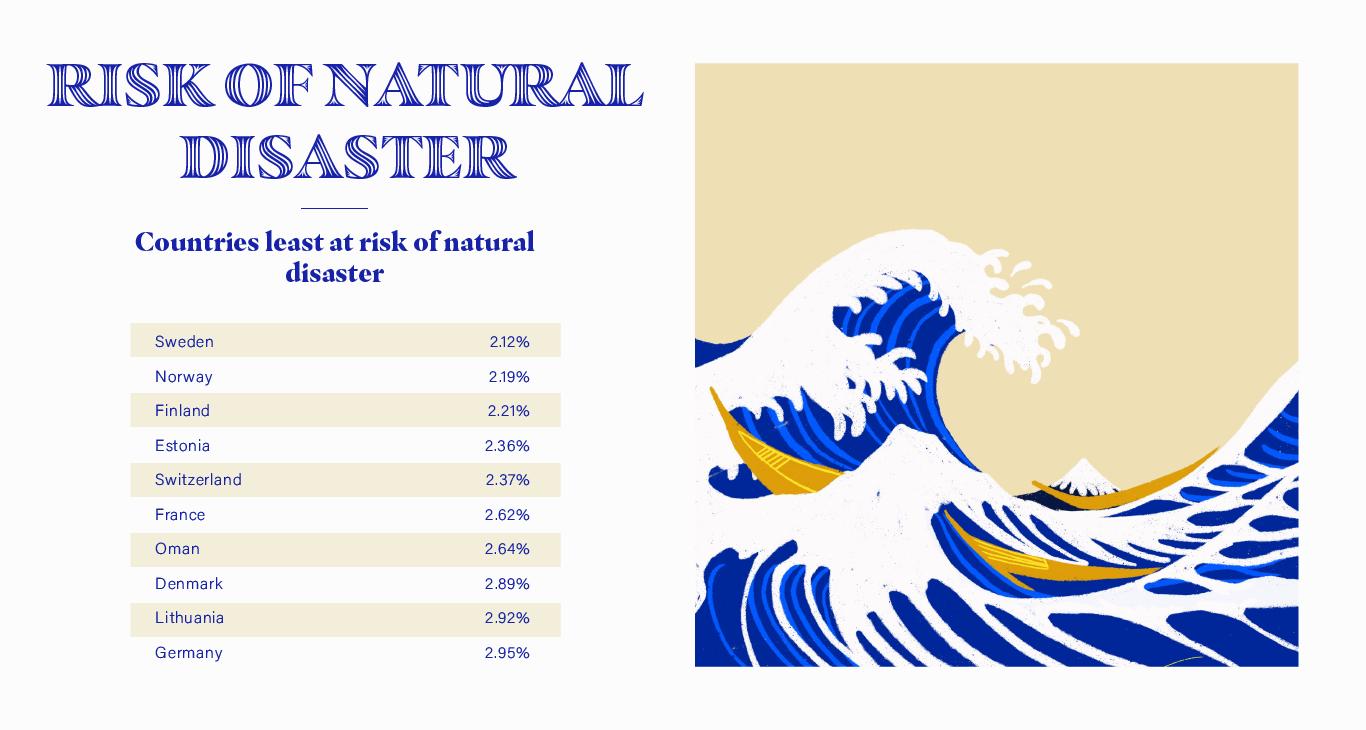 On an average trip to another country, one of the things you might not take into account is the likelihood of a natural disaster occurring while you’re there, with only a few countries in the world causing alarm. However, when you’re camping in a tent it can be a greater concern. Therefore, it’s important to note the countries with the highest likelihood of a natural disaster occurring, from earthquakes to hurricanes. Sweden with a score of 2.12 and Norway with a score of 2.19 once again came in top as the countries least likely to be hit by a natural disaster. Neither countries are at risk of particularly large earthquakes with the highest reaching 4.5 on the Richter Scale, and no risk of tornadoes, tsunamis or typhoons. 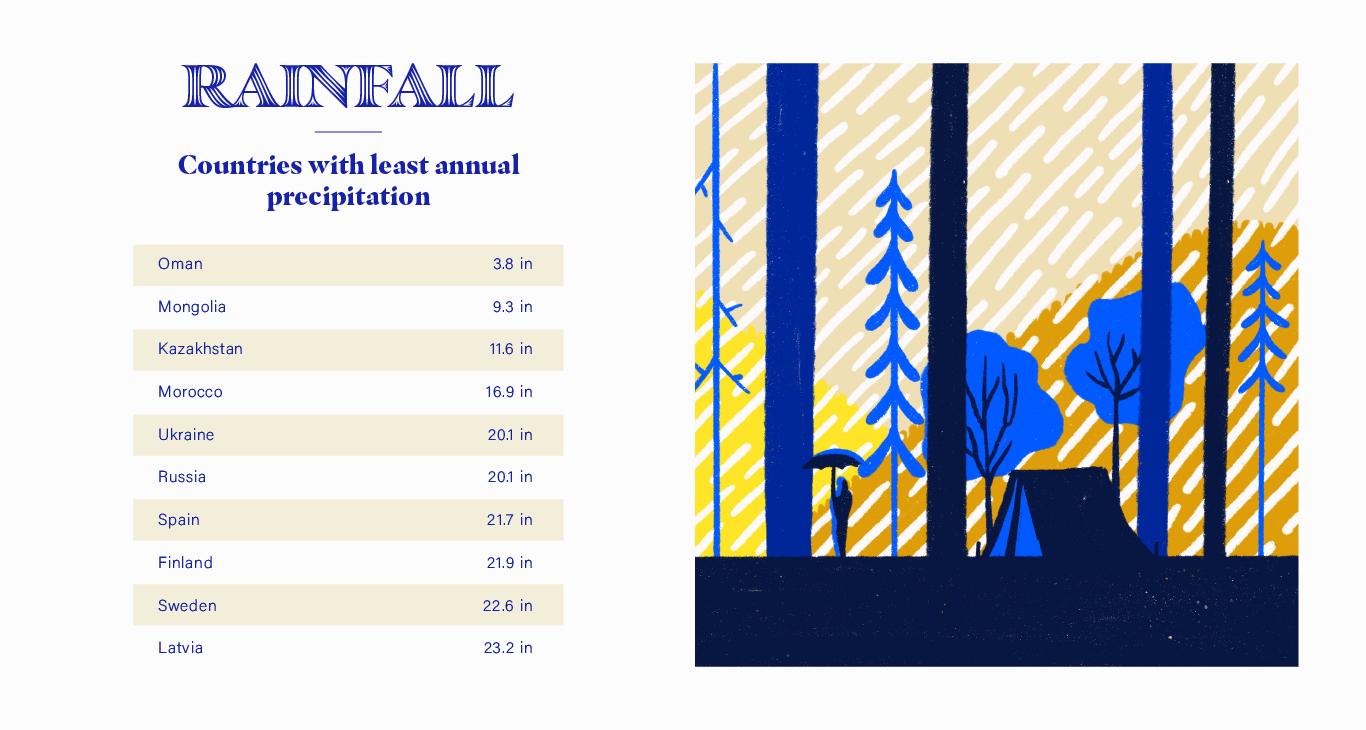 While the temperature may not play an intrinsic part when choosing a great place to camp, with plenty of brilliant options in colder countries, rainfall is something that could certainly put a dampener or anyone’s camping experience. Oman had the least amount of rainfall with only 3.8 inches per year, less than half of any other country. Oman is known for its desert plains and warm temperatures, so its lack of rainfall makes it a definite contender for any camper. Mongolia and Kazakhstan came in 2nd and 3rd place. Kazakhstan has only 11.6 inches of rainfall annually and its rogue and expansive wilderness make it a popular off the beaten track destination for hikers and campers looking for a more unusual place to pitch their tents.

To create our Worldwide Camping Index, we analysed the following categories:

Using the third party sources as outlined in the source list below, we scored each country in the above categories on a scale of 1 (lowest) – 5 (highest).

We then totalled every country’s score across all of the categories to get a final Worldwide Camping Index Score, with the highest total of 50 available. We then ranked each country using this final total score.

A full dataset is available upon request.