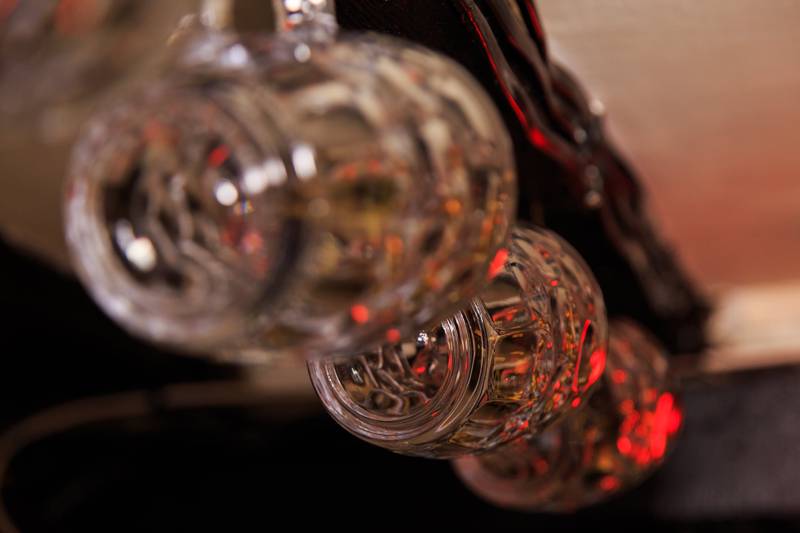 8 of the best pubs in the Lake District

While you might heat up some bolognese or cook boil in the bag rice, most camping trips don't go by without a dinner or two in the local pub. If you're camping in the Lake District, one of the UK's most popular camping destinations, you'll have plenty of good pubs to choose from and, whether you want a walkers' bolthole or a family-friendly gastro pub, there's always plenty of choice. As well as checking out the Lake District's best campsites it might come as no surprise that we at Cool Camping are occasionally prone to sampling the local public houses as well. Well, it would be rude not to. Here we've picked out just a handful of our very favourite places to stop over the years; our pick of the pubs amongst the mighty Cumbrian fells... 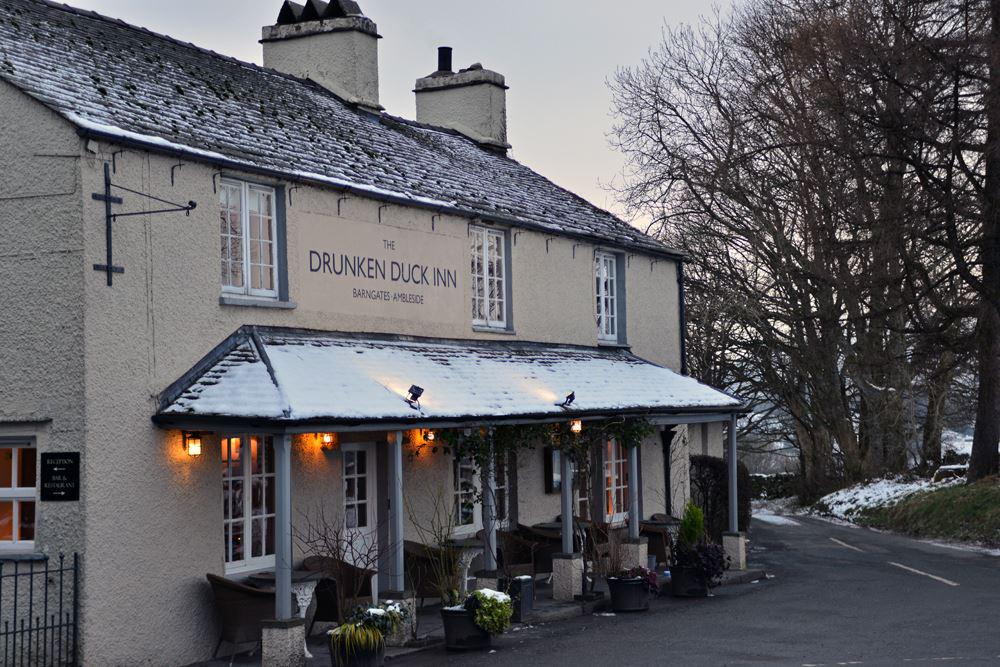 Standing on a rustic hill between Ambleside and Hawkshead, people drive from far and wide to visit the unusually-named Drunken Duck. With stunning fell views, this welcoming oasis is a firm favourite among both locals and visitors. One of the oldest and most characterful pubs in the Lake District, the spot also holds a place on the Top 50 Gastropubs list. Diners can expect a menu full of imaginative creations such as kipper scotch egg, pork fillet with crispy shoulder hash and caramelised apple, and Victoria plum frangipane with almond ice cream. Fans of the classics are well-catered for too, with the likes of ham and piccalilli sandwiches, and fish and chips featuring. And to drink, there are locally-inspired brews on tap. 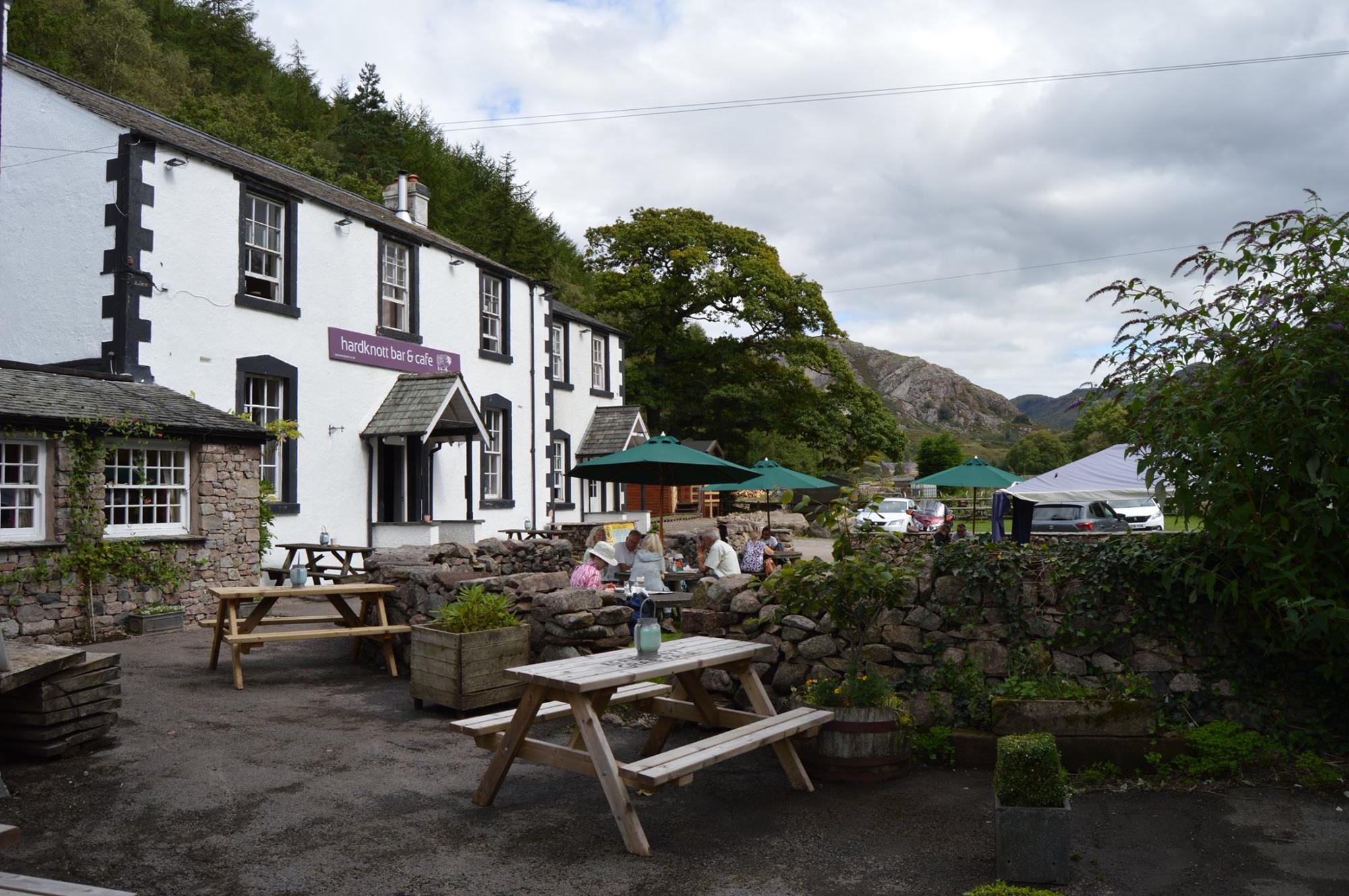 Enviably positioned at the top of the dramatic Eskdale valley and the bottom of the twisting Hardknott Pass, the Woolpack Inn has undergone a real transformation in recent years, but has lost none of its charm and character. It’s still a great country inn, en route to some of the Lakes’ highest peaks, but the downstairs bar has been turned into a sleek, contemporary drinking and dining space, and is home to timber floorboards, a slate bar, and a wood-burning stove. Food-wise, choose from Tapas, Middle Eastern, or traditional plates such as burgers and pies. But the trump card is their genuine wood-fired pizza oven, turning out top-notch pizzas. It’s also big on local beers, though Champagne by the glass is just as much the Woolpack way these days. 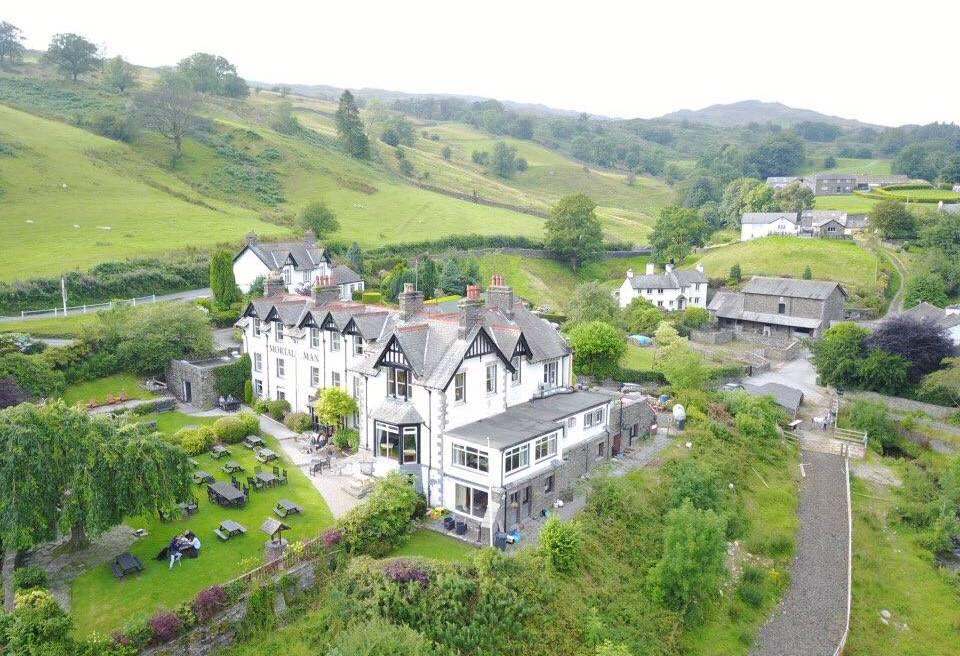 The Mortal Man is a fine old-school pub with roaring fires in winter, filling bar meals, and changing ales – eat alfresco in summer (their beer garden is a contender for the best in the Lake District, possibly the country) or inside where there’s a cosy bar area and separate dining room. After a hike up in rugged Troutbeck or Wansfell Pike, or a scenic trip on Lake Windermere, you’ll have earned a pint and a bite to eat at this traditional inn with a soaring backdrop. Choose from classics such as fish finger sarnies, sausage and mash, or gammon steak. What’s more, an ale house has been in situ since 1689, making it an historic pit stop. 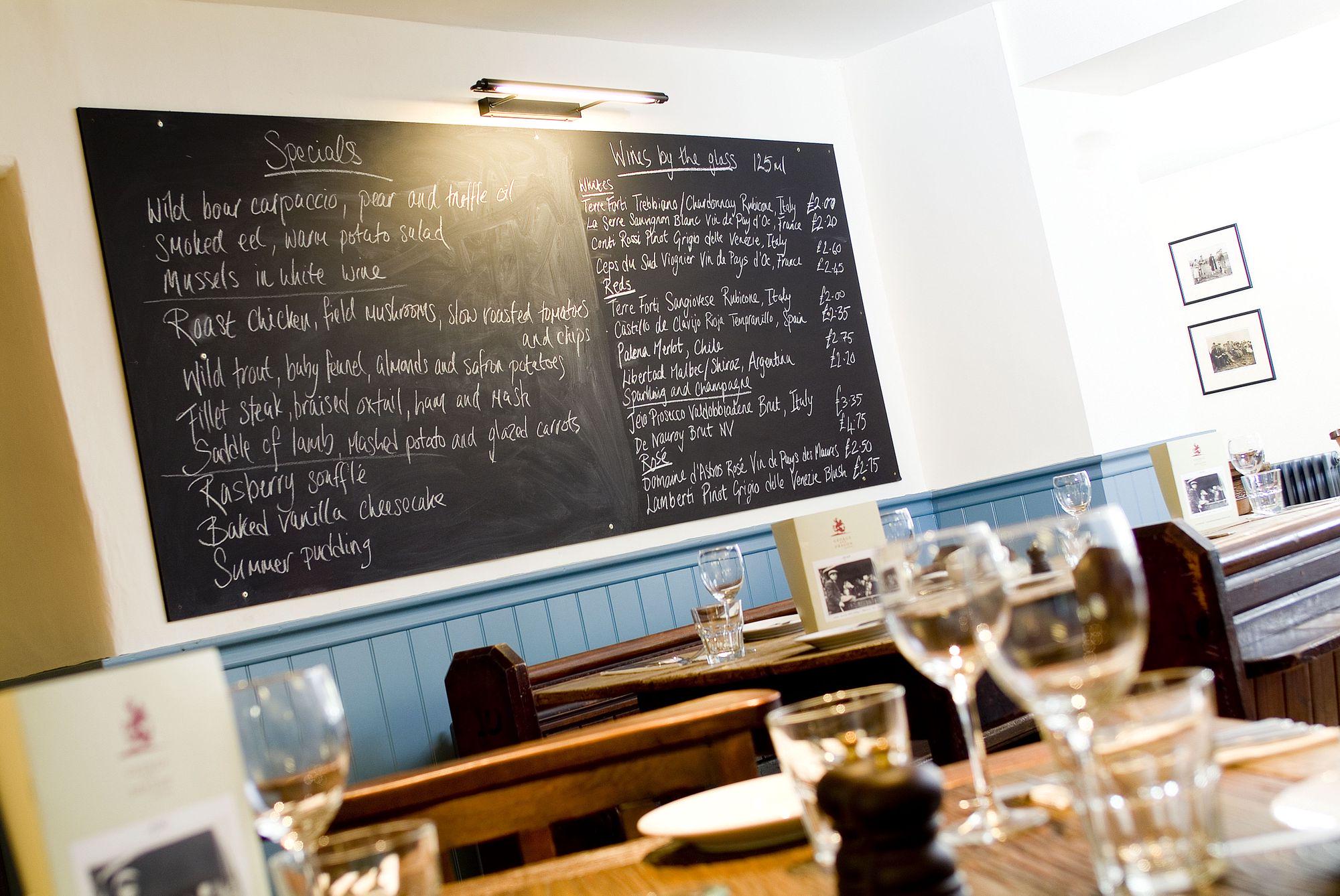 The George and Dragon

A country estate pub on the north-eastern edge of the Lake District National Park: but don’t be fooled by appearances – the eighteenth-century George and Dragon might look like any old inn, but inside we’re talking chic gastropub with an unstuffy feel, where everything is sourced from the local Lowther Estate. Walkers can enjoy the nearby Askham Fell route, with its iconic view of Ullswater, before heading back to the George and Dragon for fishes such as Whinfell shoot pheasant with leg and pancetta stuffing and fondant potato, or salt cod fritters with chorizo, roast pepper ketchup, and pickled fennel. Plus there’s a lovely sunny courtyard and garden from where you can contemplate your next move. 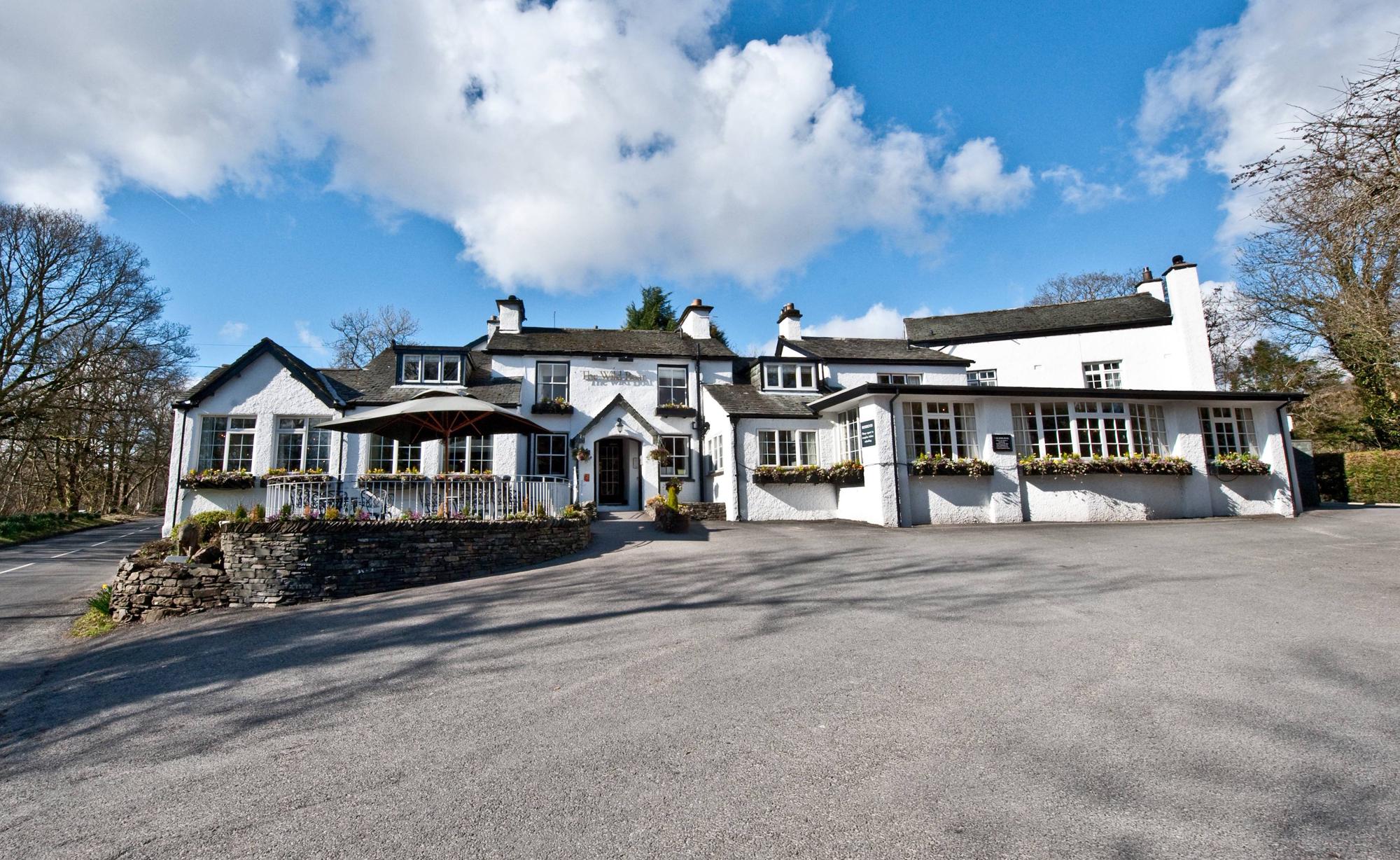 The Wild Boar Inn is situated in the peaceful Gilpin Valley – just a stone’s throw from Windermere – and is home to the Lake District's first restaurant smokehouse, meaning delicate smoking adds a distinctive flavour to anything from tomahawk steak to Loch Duart salmon. The restaurant itself is a wonderfully romantic place – an opened-out cottage interior of warm colours, exposed stone, ancient beams and hideaway tables. And the chef’s table is bang in front of the open kitchen, with a grandstand view of the chargrill that's at the heart of the menu. The establishment also houses their own microbrewery, and a bar stocking a whopping 110 whiskies. 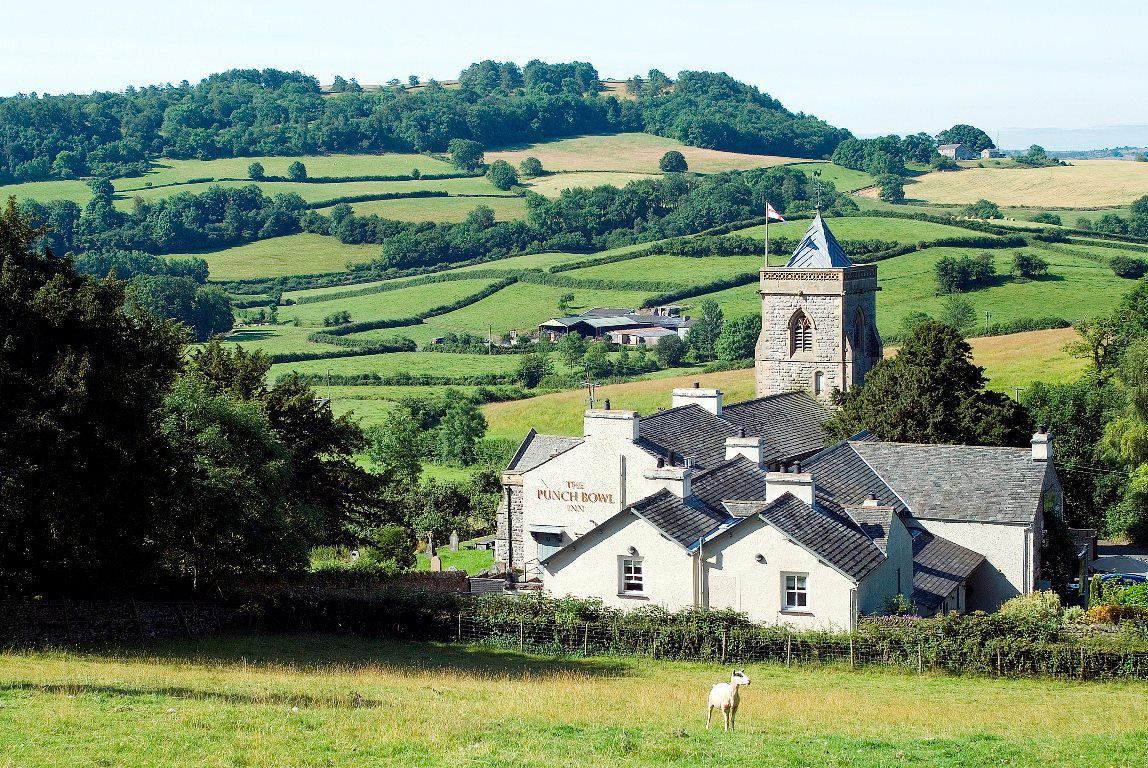 Well-positioned in the village of Crosthwaite in the gloriously unspoiled Lyth Valley, the Punch Bowl Inn is also close to both Kendal and Windermere. Fusing old and new, there’s a lovely informality to the place, despite its undoubted gastro pulling power. With the same menu available either in the slate-floored bar or more formal restaurant, this might mean braised oxtail croquette, crab tagliatelle or Lakeland venison – all delivered with panache and accompanied by a seriously good wine list and local ales. And for something extra special, there’s the chef's signature menu. Oh, and 2019 saw them take the Front of House Team of the Year award at the Top 50 Gastropubs ceremony. 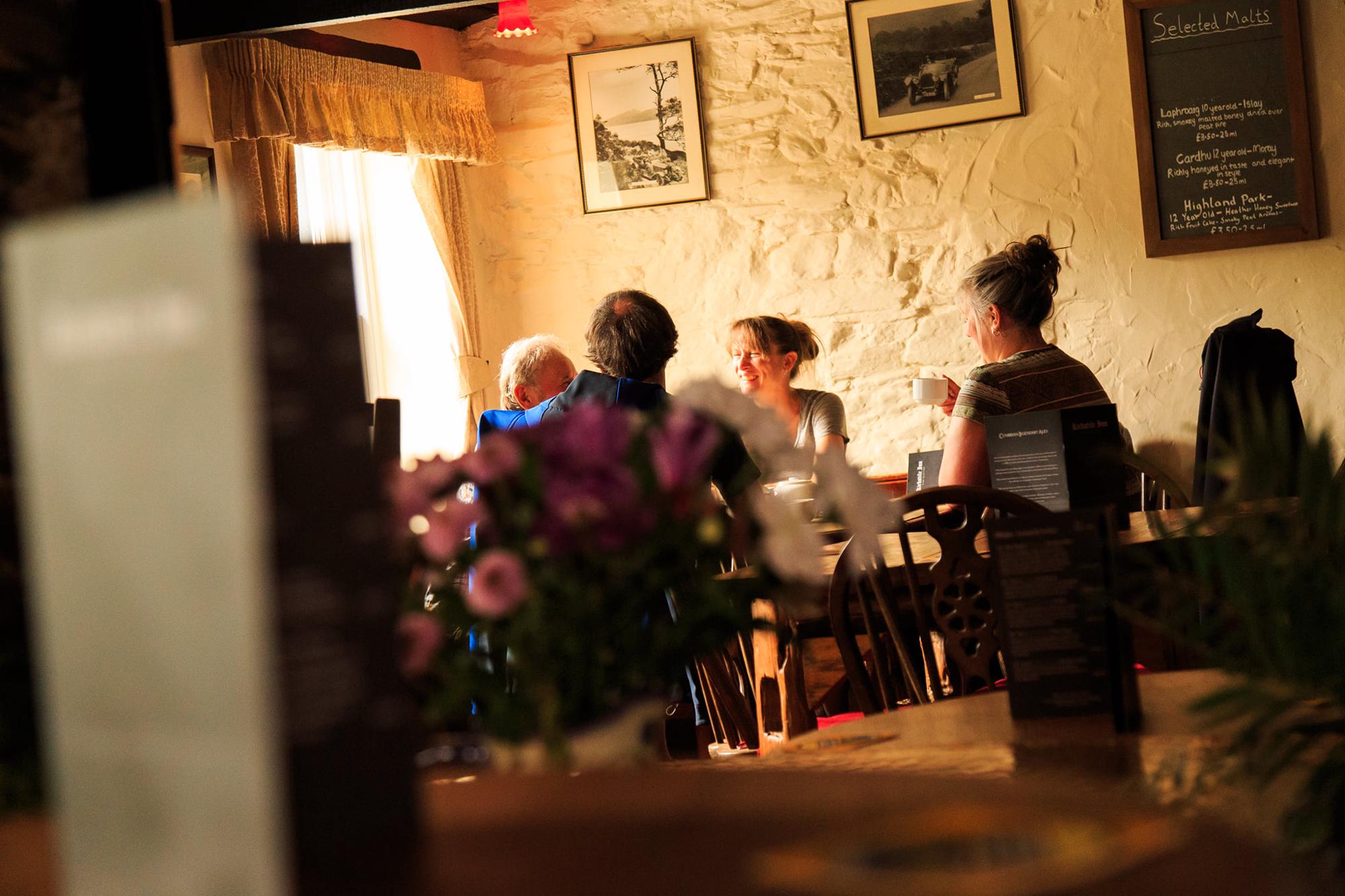 Tucked away up tiny country lanes at the back of Loweswater – one of the Lake District’s lesser-known stretches of water – you really have to be looking for the Kirkstile Inn to find it. The beer garden has a terrific view straight up to the summit of Melbreak, the local peak, which you can climb in an hour from the inn. Then head inside for superior bar meals, with dishes such as pan-fried hake with tempura king prawns, corn fed chicken supreme, and vegan curry featuring, plus a selection of daily-changing specials. There’s also a range of award-winning tipples on tap, made in their outbuilding brewery, and served from the low-beamed bar. 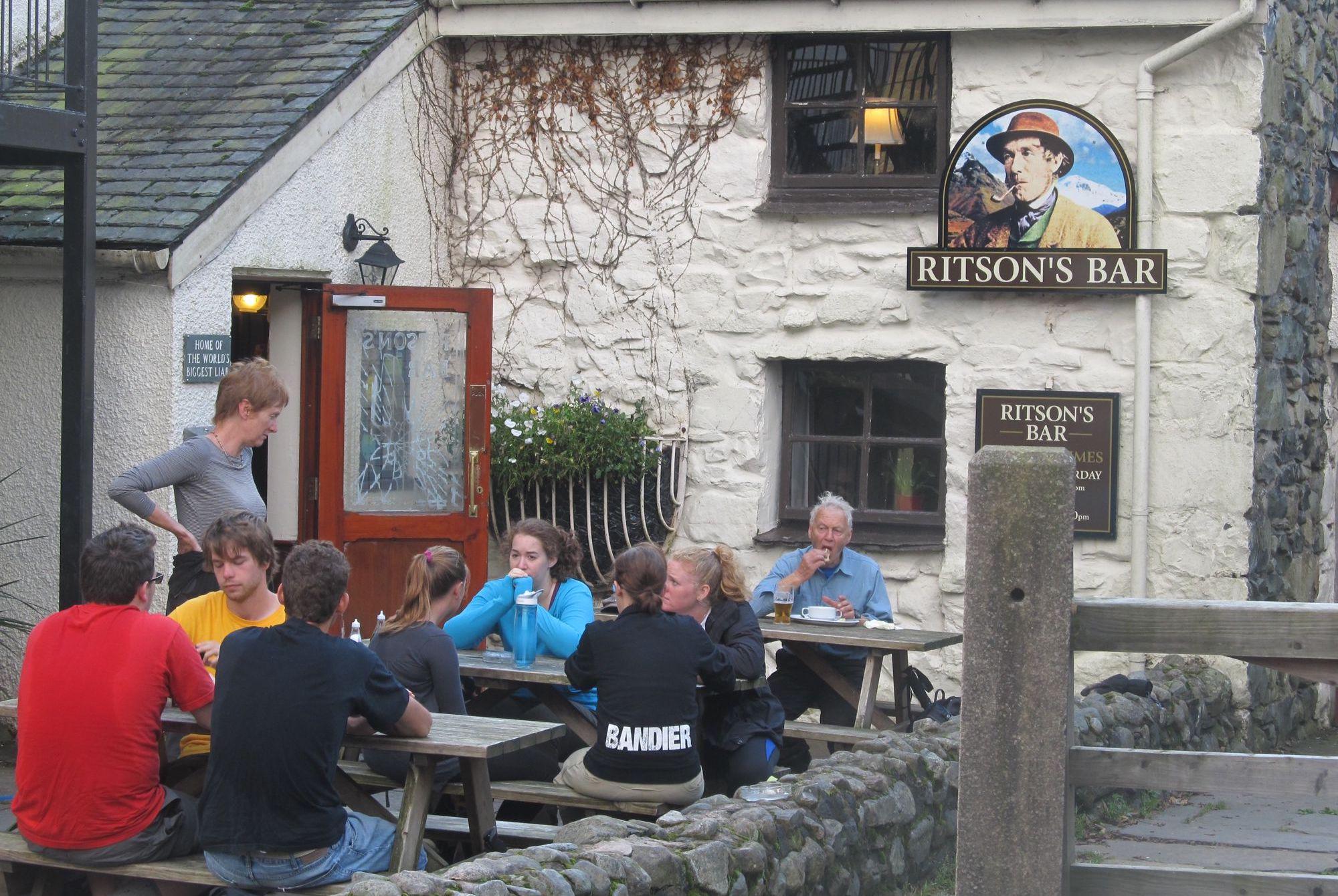 The Wasdale Head watering hole is a beacon of light for outdoors types, who fall in after a day on the Wasdale fells. The bar is called Ritson's, and takes its name from a nineteenth-century landlord known as the "world's biggest liar" for the tall tales he told. Hearty hiker-friendly fare such as fish and chips and lasagne are plated up, and they specialise in Herdwick lamb when available; there’s also a more formal dining room should the mood take you. Their varied beers are supped on by thirsty rompers and, outside, there's a covered courtyard and riverside picnic tables, from where you can watch the sun set over some of the UK's most majestic scenery.