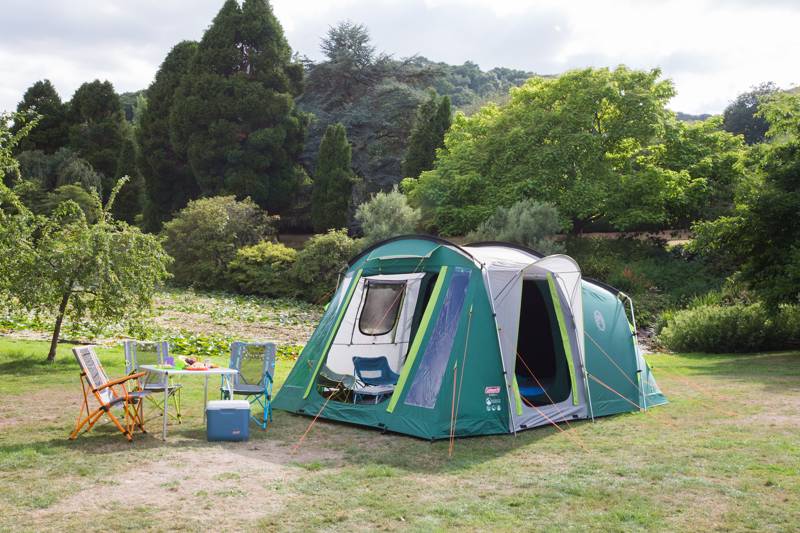 Having previously tested Coleman’s Rocky Mountain 5 tent, we were keen to see what was new in the range this year and struck upon the new MacKenzie 4 BlackOut as one of the latest family models. Taller and with more floor space, the MacKenzie 4 BlackOut is like the sturdier older brother of the range and is ideal for camping holidays with the kids. We took it away for a long weekend to test it out.

Our first impressions of the tent came well before it was erected, when a puffed out delivery man arrived at the door. The MacKenzie 4 weighs a tonne (actual weight 26.6kg) and is quite tough for a single person to carry much further than 50 metres or so. Planning to test it over an Easter weekend in France, we joked about the potential fuel costs of weighing down the car for the eight-hour journey ahead. There was a genuine point to be made here, though, the MacKenzie 4 is a weighty beast.

The reason behind this additional weight is the strong steel pole system that is far more robust than other tents in the range, including the Rocky Mountain 5. The bendy fibreglass poles are out and storm-proof metal poles are in, meaning there’s very little flexibility in the shell and it’s more robust in windy weather. It was noticeably quieter (less flapping of the tent material) than when we tested the Rocky Mountain 5 last year. While bulkier and a little heavier than previous models, the result is an undeniably sturdy tent and, unlike inflatable tents (which are often much heavier) you can pack the poles separately if you wish, lightening it into two separate loads.

At the campsite, the MacKenzie 4 was quick and straightforward to pitch. The third main pole that’s a different length from the others is clear and colour-coded, while, inside, coloured tabs ensure the inner sleeping chamber is inserted the right way around. One person could do most of the initial work, with two people needed at the end to erect the tent and peg out the guy ropes. From bag to base camp, it was pitched in around 10 minutes.

The MacKenzie 4 has bucket loads of space. It very comfortably sleeps four people (thats the 4 in the name), with a divider you can toggle into place to create two separate bedrooms. The vast porch area, meanwhile, is just as spacious, with room for a fold out camping table and chairs if it rains. Front and side doors open out and there’s a raised lip on the side entrance to provide extra shelter. A band of large pockets fronts the bedroom and there are hooks for hanging coats and jumpers.

As mentioned in our review of the Rocky Mountain 5, when it comes to the patented BlackOut lining, it really does work well. There are vents in the back of the tent and zip away mesh windows, which provide ample ventilation on hot French summer nights, while on bright mornings the tent blocks out the light superbly, allowing you to sleep in at least until all the other campers nearby arise early to babble outside and wake you. The problem with a clever tent that lets you sleep in until lunchtime is that, unless everyone has one, it still can’t stop other early campers from waking you up.

The Coleman MacKenzie 4 BlackOut is a good all-round family tent with a genuinely unique selling point in the BlackOut lining. It’s robust if you plan to pitch at windy seaside campsites, is well designed for bad weather and has heaps of space inside. While it’s quick to pitch it’s tough to carry and takes up considerable space in your house or car.