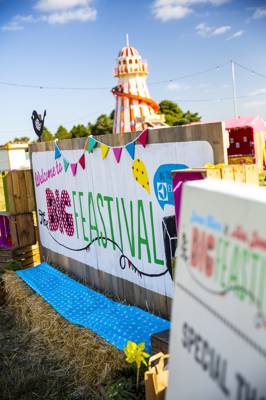 Rave with Jamie? TV chef's festival ramps up the music

Nobody illustrates the ‘brand-ification’ of the way we consume, more than Jamie Oliver. Everything he endorses turns to gold, based on the consumer mentality that ‘well, I like that Jamie, so I’ll probably like that book/app/saucepan/barbecue/festival’. So we all desperately want The Big Feastival to be a success, because Jamie’s behind it, and everyone likes Jamie.

The festival is run in conjunction with ex-Blur bassist, now cheese-maker from the very big farm-house in the country, Alex James. It takes place over two days on his farm at Kingham on the Oxfordshire-Gloucestershire border. An intimate affair, it occupies just a couple of meadows, with the main stage (flanked by food stalls, bars and chefs demonstrations) in one field and the Little Dude’s Den family area in the other. And with family attractions, posh food, a safe music line-up and an ‘under-12s-go-free’ policy, it’s no surprise the crowd was almost exclusively well-behaved young families. So far, so good.

But let’s get straight to the headline act – the food. Clearly food was always going to be an important part of a festival run by a chef and a cheese-maker, and while the quality of food didn’t disappoint, the selection and opportunity for tastings did. There was a focus on gourmet variations of fast food and street food; Jamie’s Fish and Chips taster portion (£7) and gourmet sausage on a stick (£3) were popular options. There were fresh lobster wraps from the Pembrokeshire Beach Food Company and slow-cooked lamb from Beirut street food afficionados, Yalla Yalla. But there was a limited selection compared to other food festivals, where you might expect independent restaurants serving taster portions of their signature dishes. And if there were any lighter, salad-based options, we certainly couldn’t find any amongst the kangaroo burgers and handmade meatballs.

You can’t help compare The Big Feastival to Wilderness Festival, which has food on offer from Ottolenghi, Mark Hix, Moro, and St John, amongst others. At the Big Feastival, it was Jamie’s Italian and his other chain restaurants – perfectly decent restaurant food, but not really the sort of thing you would go to a food festival for. It was there to buy and eat, rather than experience, savour and enjoy.

The heavy presence of sponsors Tesco, Electrolux and Lexus, plus trade-show-like stalls did nothing to detract from the overtones of commercialism, so it was good to find the Alex James Cheese Hub which was presented in a style more appropriate for a celebration of food in a field – cheeses lovingly spread out surrounded by hay bales with plenty of opportunities for tastings.

Something else that was organised very successfully was the line-up of chef demos, with a multititude of big names making appearances in the display kitchens. These included Jamie’s mentor Gennaro Contaldo and Rachel Khoo, star of TV’s ‘The Little Paris Kitchen’; although a particularly big crowd flocked to see Jamie “talk pork” with BBC Countryfile farmer Adam Henson and the effervescent DJ BBQ – another of Jamie’s mates.

Next door, the Little Dude’s Den field was a kid’s heaven, as even toddlers were able to run wild, free – and safe. Straw bale play-fights took place under blue skies, while huge bubbles were pumped out across the field. The trampolines and the Cotswold Farm Park’s animals were an inspired attraction, with the cute little kunekune piglets being the centre of attention. A lack of food stalls in the area was a disappointment for parents though, who had to drag happy kids away to find food. As you would expect, the solitary ice-cream truck was hugely popular!

On Saturday, as the sun went down on a totally mud-free field (footwear was more Havainas, less Hunter wellies) parents were happy to let their kids roam free and splash more cash on the fairground rides, while they settled into their collapsible camping chairs to imbibe the vibes. And what of the music? At the first iteration of the Big Feastival, the music was most definitely a secondary consideration to the food. This time around, though, the line-up was much more exciting. Norman Jay was perhaps the most accomplished in lifting the event from food show to music festival, with a tempo-building set that roused the crowd from their picnic rugs and camping chairs. Veterans Dodgy didn’t disappoint with an old school set including “Good Enough” and “Staying out for the Summer.” Middle-class mums, glasses of Prosecco in hand, swayed to the soulful sounds of Lianne La Havas, while the dads supped pints of Birra Moretti (one of the many “official partners”).

Rizzle Kicks might have seemed an odd ingredient to throw into a relatively tame mix, but a full summer of touring has really honed their live entertainment skills and the crowd jumped up and down in tandem with them. By the time headliners Basement Jaxx arrived, the armchair crowd had dwindled, as fathers unfurled sleeping children and took them back to bunting-decorated bell tents, leaving the main stage to the party people. A trademark rousing set from the Jaxx, complete with a larger than life singer dressed as a giant silver star, was a spectacular highlight only enhanced by the intimate venue.

Sunday began with many campers politely, but hungrily, waiting at the festival gates, as the breakfast queues in the camping fields had been long and slow. The entertainment line-up included family, cult celebrity Justin Fletcher (AKA Mr Tumble) and mums’ favourite Mark Owen, who threw in some Take That numbers to the delight of the adoring female onlookers. But the highlight was the Cuban brothers being joined by Alex on bass and Jamie on drums. Is there nothing Jamie can’t do?!

Camping is a big part of Feastival and was a really friendly, well-organised affair; separate fields were designated for campervans and families, while a disabled campsite was set up right by the festival gates. The only improvement might be to have more food stalls in the camping area for the breakfast run, but that’s a small grumble for an otherwise well-organised camping experience. Those opting for the ultimate in civilised camping checked into the Yurtel glamping field, where a cinema tent was laid on for the kids and a bar for the adults.

No mention of the loo queues? That’s because they weren’t anything to tweet about. There were plenty of loos, strategically placed around the site. And they were clean and had lots of lovely smelly handwash. So lovely and smelly that the flies stayed away.

So, does the Big Feastival actually work? Does it live up to the ‘Brand Jamie’ promise? Well, in reality – not quite, not yet. Some of the ingredients need to be tweaked. And, surprisingly, it’s the food, rather than the music, that lets it down.

Tell us what you thought, we'll add the best comments here.