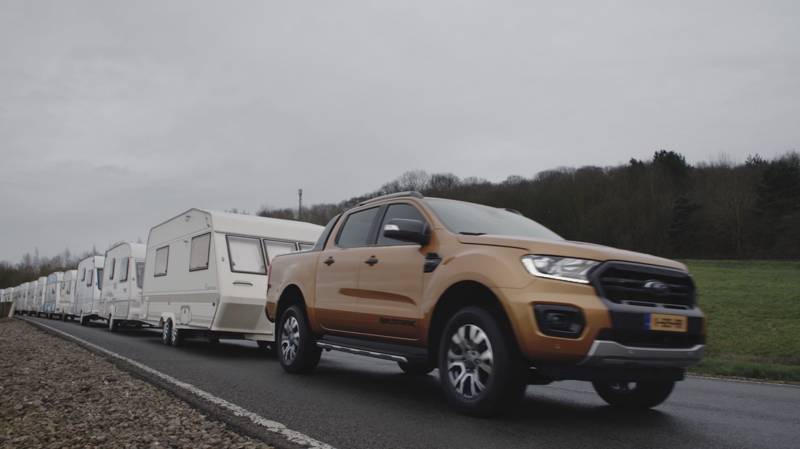 Is this the longest caravan convoy ever?

What do you get when you put 15 caravans in a row and tow them with a single vehicle?

Even the most cool-headed of campers can sometimes get frustrated with the caravanning contingent, especially when you're on a snaking A-road travelling at 30 miles per hour. But it's not often you get stuck behind a whole row of them.

In their latest advert, Ford have showcased the pulling power of their latest EcoBlue Ranger with a tongue-in-cheek caravan convoy and a surprisingly long overtaking manoeuvre.

Measuring almost 100 metres in length with the two-litre EcoBlue Ranger at its head, the caravans consisted of a diverse range of models that included a 1950s Airstream, a hippy-themed caravan and a vintage caravan especially for dog lovers – complete with paw prints.

In total, Ford say the caravans weighed some 20 tonnes and the film was shot on a closed track – Millbrook Proving Ground – in Bedfordshire near London. While the feat makes for good viewing, it's not likely to be repeated on narrow Lake District roads any time soon. The film took a month to put together and required the caravans to be reinforced with strong steel frames, as well as extra tow bars fitted front and back.

“This was the slowest stunt I’ve ever done", said precision driver Paul Swift who was behind the wheel, "but also one of the hardest; trying to keep the caravans on the straight and narrow while the car drove past was a tough challenge." Next time, perhaps just taking a tent will do.