Yes – it's worth taking a moment to ponder why the world’s leading 4x4 brand is releasing a new smart phone. But then that’s what brands do. After all, Land Rover is far more than just a car manufacturer. It’s a concept and a very British icon – a vision of rugged reliability; of adventure, exploration and endurance.

It’s this same ethos that has been ploughed into the newly released smart phone – the aptly named Explore – and with hiking, biking and camping very much on the designers’ minds, we thought it only right that we test it out. 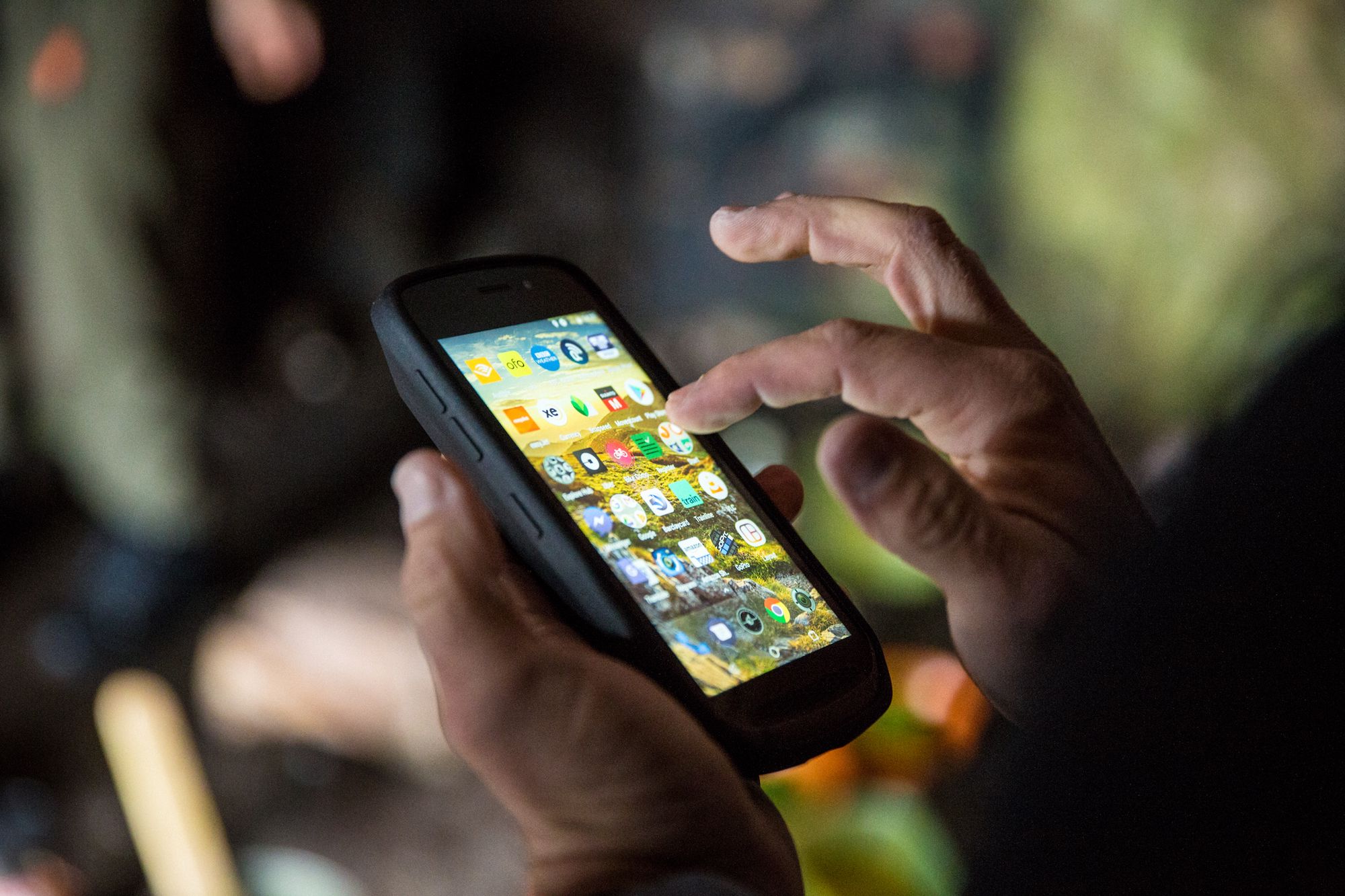 The idea behind the Land Rover Explore is simple: To be a durable, adventure-proof phone that can be taken out on the wildest of camping expeditions and withstand the test, while also looking good and performing alongside its competitors on a day-to-day basis. The result is a smart Android phone (Nougat operating system) with 4GB RAM, 64GB ROM and all the functions you would expect from an Android device, packaged up inside a super-strong phone design.

As soon as you look at the Explore, eye-catching details conjure up the Land Rover brand, with a honeycomb-design speaker at the bottom reminiscent of their vehicle’s front grill and, on the back, a camera styled to look like the headlights on a Discovery. Initially we thought these features would stand out only to complete Land Rover nuts, but it turns out that most people we’ve shown the phone to have picked up on them straight away. Perhaps the brand is a firmer fixture in the national psyche than we realised?

Durability, meanwhile, comes in the form of Corning Gorilla Glass and super-strong casing that’s drop resistant up to almost two metres and water resistant down to one and a half. Pair that with a screen (1080 x 1920; full HD) that you can use with wet fingers or wearing gloves and you can see why the strength of this phone is in its outdoor capabilities. It can also work from -30°C to 65°C; so skiiers and sunbathers won’t be seeing that “sorry your phone is too cold/hot” warning any time soon.

Like any brand new mobile phone, the device comes complete with a charger and a handy set-up pamphlet. The Land Rover Explore, however, has an additional Adventure Pack too, which snaps on to the magnetic backing to add extra battery life. Inside it has an additional 3,620mAh battery, along with a 25 x 25mm ceramic patch GPS antenna to give the most precise location readings of almost any mobile phone on the market. 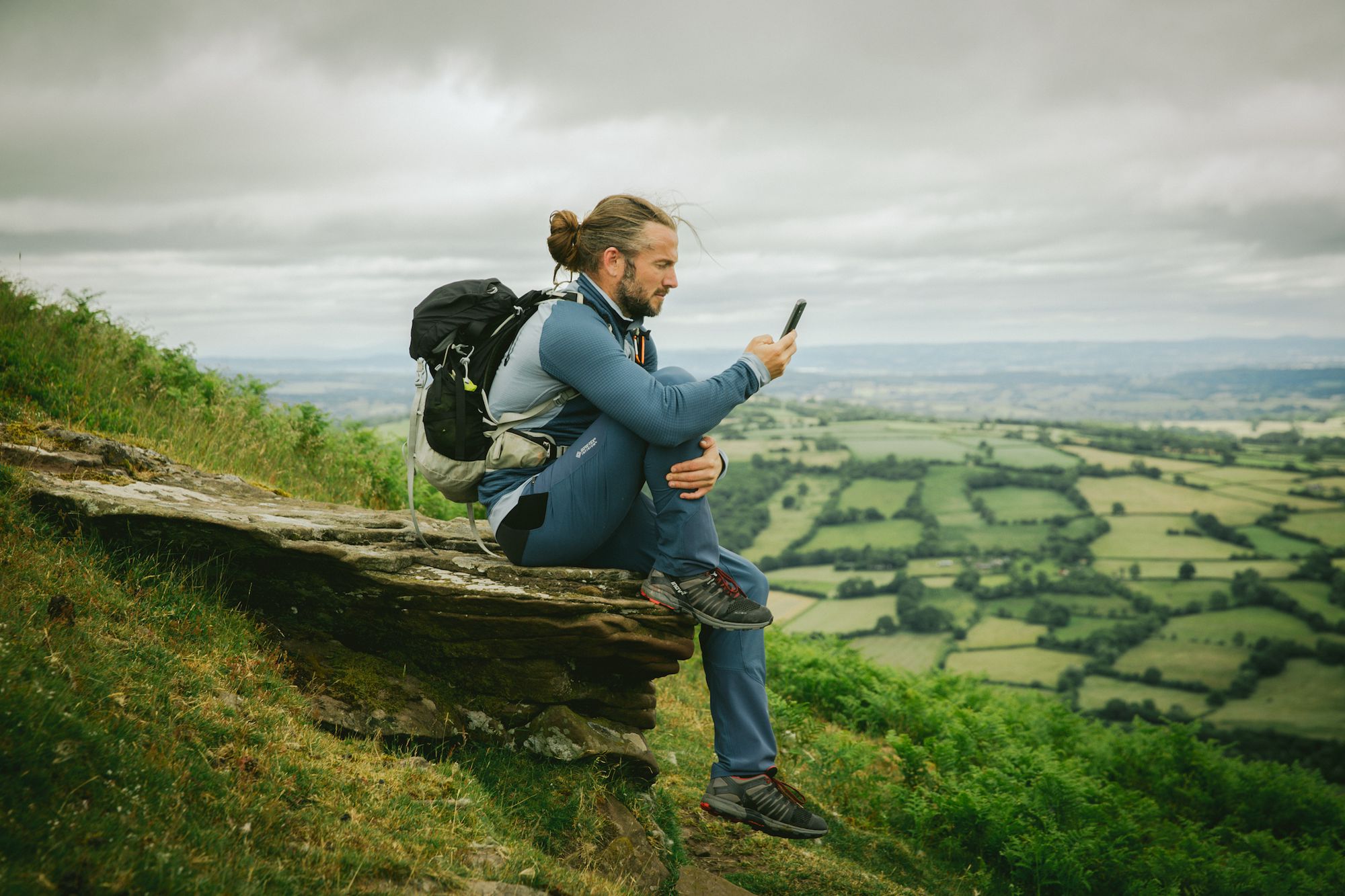 Out in the Field

We initially got to grips with the Land Rover Explore in the wilds of the Brecon Beacons and have been using it solidly now for two months – including city navigating in Barcelona, Pyrenéan camping at Huttopia Font Romeu, cycling in North Wales, wild swimming in Ireland and wild camping in Norfolk – so we’re content we’ve given it a fair shake down.

There’s no denying its durability. The carabina-fitted case that comes with adventure pack allows you to clip the phone easily to a belt or the outside of a backpack (a sturdy bike mount is also available). This makes it easy to access but also exposes it entirely to the elements, be it wind, rain or snow. For a normal phone that might be a problem but, even in the harshest weather, we could unclip the Explore and use the touch screen easily. Underwater the phone doesn't function fully (the touch screen gets understandably confused) but if you started recording videos above water you can happily dive underneath and continue recording. This presents the very cool novelty of a good-quality underwater camera, which we became rather obsessed with.

The extra patch GPS antenna is also a great addition for a device aimed at wild campers and those who genuinely spend a lot of time outdoors. The Land Rover Explore comes pre-loaded with the ViewRanger app, giving users access to premium grade, detailed off-road topographical maps, and functions accurately when you need to find your way (such as in the cloudy Brecon Beacons). The app also has an augmented reality Skyline feature, so you can hold up the phone and it will name the different peaks around you. The latter, while handy, doesn’t pre-load in quite the same way as the maps, meaning you still need good data connection to use it at a given time. As a result it can be a bit of a data drain and, if you’re properly off-grid, it makes the function less useful than expected.

The final key feature when using the phone in a wild environment is the custom dashboard app. Click on the dedicated icon that can ‘float’ around the screen when other apps are in use and a page opens with all your essential outdoor information. The front page has a panel for weather predictions, plus six panels that can be customised to your needs – options include a compass, your exact latitude and longitude, altitude, tide times, humidity, UV index, wind speed, swell height, SOS torch and many more. We created our own ‘wild camping’ panel (sunrise and sunset times, torch and so on) and saved it, along with one for swimming (tide times, sea temperature, air temperature and more), which we could use on different travels and at different times. 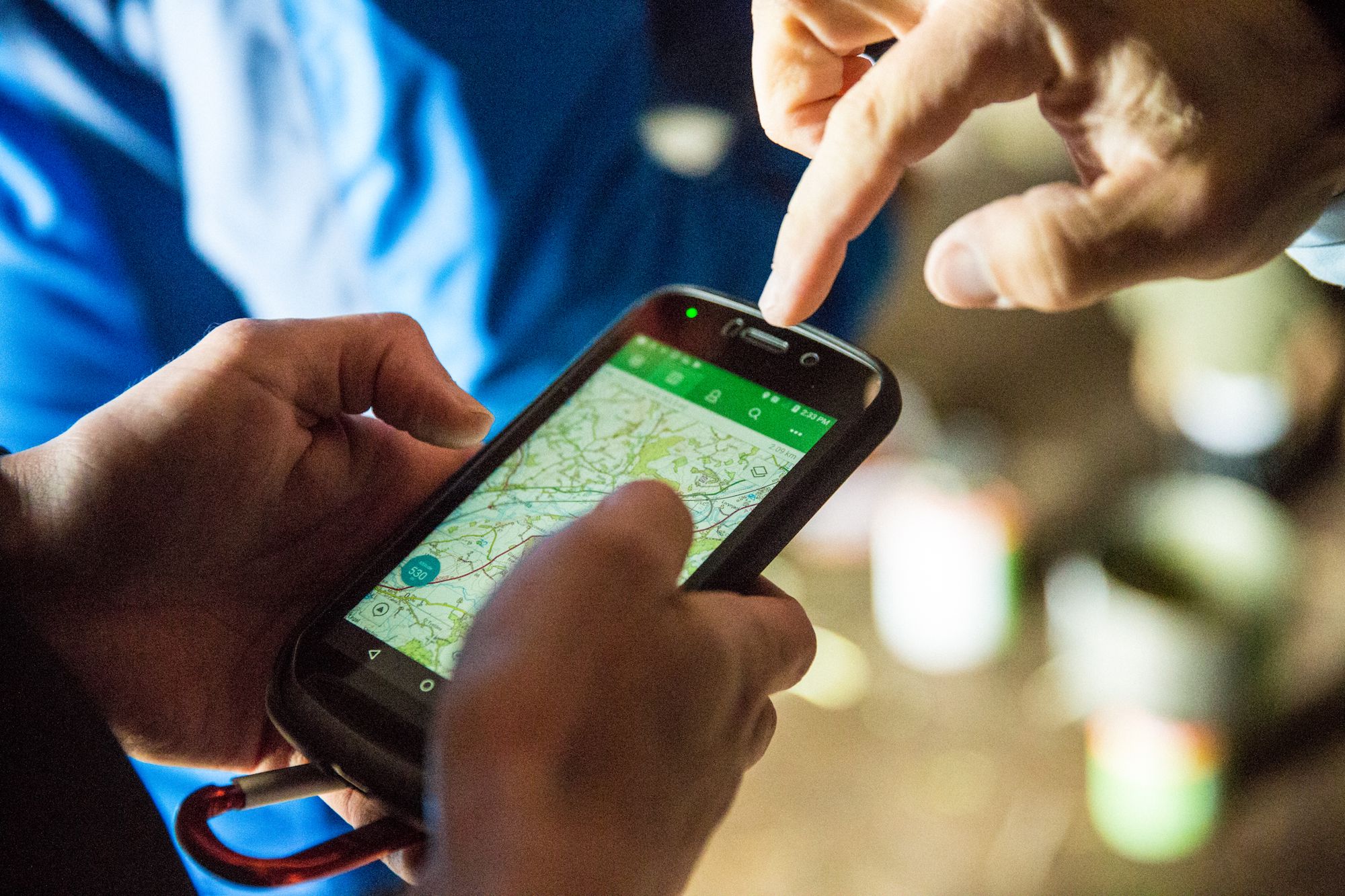 Back in the Office

It’s always a bit of a crash landing when we come back from a camping trip and land in a stuffy office. Through the course of testing the Land Rover Explore, we’ve chatted to fellow campers, endurance athletes, national park rangers and even arctic explorers but, just as a Land Rover Discovery is most often seen picking up the kids from school, so to does the mobile phone need to suit the everyday life of a workaday cool camper. It’s here that we sometimes found flaws with the Explore phone.

Rugged, off-grid durability comes at cost. While many smart phones have grown in recent years – think new iPhones and Samsung Galaxies – their slim design and edge-to-edge screen keeps the weight down and the design sleek. Behind its Gorrila glass and tough casing, however, the Land Rover Explore has a slightly smaller screen area than its counterparts and still weighs in at some 232g – and that’s before you snap on the additional battery. The result is a bulkier device (albeit a bulk you would expect from anything marketed as so ‘rugged’). It also means the snap on Adventure Pack really is only suitable for adventures (when you have a back pack or utility belt for example) and not something you might use during day-to-day activities.

For urban days when there are few GPS demands or navigation tasks, however, the battery life is exceptional, even without the Adventure Pack. It lasted longer than both the iPhone 8 and the Google Pixel. With casual use we’ve often used the Explore for two back-to-back days and not needed to recharge, which is a massive bonus. All of the regular Android phone features work quickly and easily, as you would expect, meaning anyone using the phone daily will find it as slick as any other but lasting for much longer without a recharge.

We also had mixed feelings about the brightness settings on the phone. The 5-inch 1080p screen has a good top level of brightness for viewing in direct sunlight and good night time settings. This means that, in the evenings, you can apply a red light filter, helping preserve natural night vision and stopping you from getting blinded if you look at the phone in darkness. In between times, however, we found the phone’s in-built sensors were poor at picking up light changes and auto-adjusting the screen. This means, regularly having to adjust the brightness setting ourselves. To fix, you quickly swipe down the settings bar and turn it up or down. No big deal. It’s only the tiniest of problems but, over time, it becomes a frustration that we haven’t found with other phones. 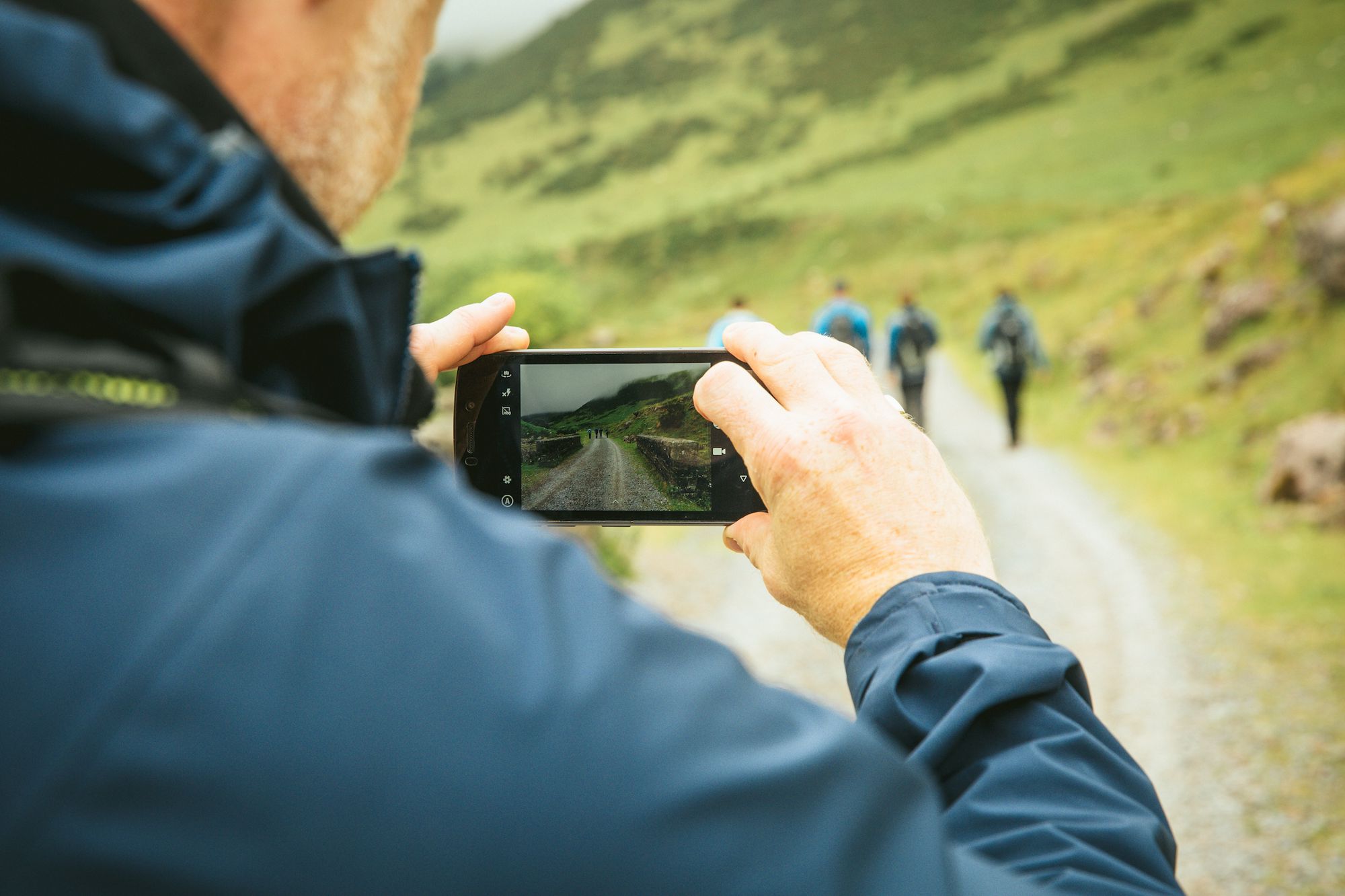 The Land Rover Explore has a 16MP rear camera and 8MP front-facing one to help you capture those moments under canvas or out on a far flung hilltop. Many of today’s mid-range and flagship phones have dual or even triple camera arrangements, so by sticking to a single camera setup the Land Rover Explore is already at a disadvantage.

In good natural light the images are reasonably sharp, clear and colour accurate but don’t match other similarly priced smart phones. In low light the performance is worse, with softness in the images and a lack of detail. The fact the phone is waterproof – essentially giving you an underwater camera – is a fantastic quirk, though, and needless to say we rinsed this feature for all it was worth during wild swims.

Since the phone is primarily designed for outdoor hardiness, adventure and navigation, being critical of the camera capabilities seems harsh. Nevertheless, we feel that the importance of a good camera to the modern day user has been somewhat overlooked. After all, smart phones stopped being about phoning people years ago and, in just the same way, a decent camera has fast become one of the most important functions to many. You only have to look at the adverts for other devices to see the importance placed on this nowadays and here the Land Rover Explore lets itself down. After all, having dropped, dunked and testing the phone to within an inch of its life, we were desperate to start telling people about it; but the photos of our test? Well, they were better taken with something else. 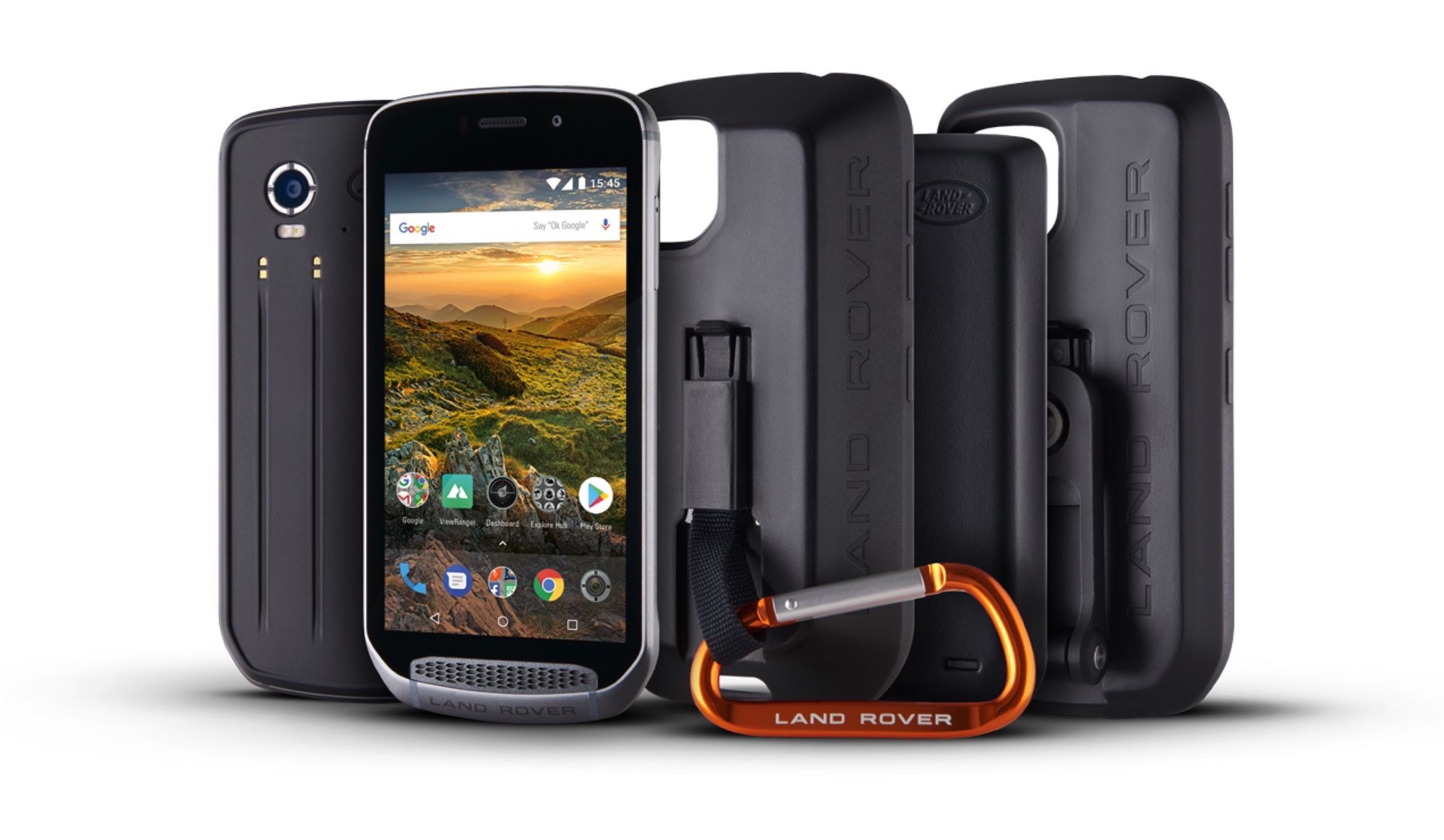 For truly outdoors types, the Land Rover Explore is aimed squarely in your direction and hits the mark. Sailing, cycling, sea kayaking, rock-climbing, long-distance trekking and wild camping are the optimum setting to unclip the carabina and start using this phone, where its key functions will be much appreciated.

The big question you have to ask yourself, however, is just how much of an adventurer are you? For weekend warriors that spend every single Saturday night under canvas, the Land Rover Explore certainly has real appeal. But the remaining five or six nights of that week? At the least, you'll probably want to invest in a separate camera to use but for regular day-to-day mobile users the Land Rover Explore might be waiting for the weekend just as much as you are.

The Land Rover Explorer is available now (RRP £599.00), with all orders currently including a free Adventure Pack, case, carabiner and ViewRanger voucher for premium mapping. Visit landroverexplore.co.uk for further information. Cool Camping were not paid for this review.