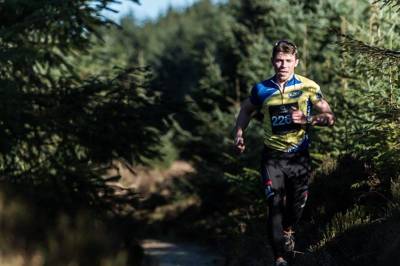 “It’s when you start talking in car distances that you know you’ve got to be a bit crazy”, my friend Chris said, tracing his finger along the red line that wiggled its way across the map. “It’s almost the same distance we drove from the airport!”

It’s true. Quest Ireland’s 57-kilometre Glendalough event – a trio of cycling, running and kayaking – is a mere kilometre less than its direct distance from Dublin Airport. And once you throw in the hulking Wicklow Mountains, undulating like a granite backbone across the county, you realise that the route is no suburban walk in the park. Instead, lost among a thousand contour lines, the fat red mark of the course rolls through some of the most dramatic landscapes in Ireland. It promises a rather gruelling opportunity for adventure – a quest, as the organisers rightly name it. It was too tempting not to try.

As it happened, the physical demands of the second ever Quest Glendalough event came early, with the forecasted excellent weather shepherded in by a toe-numbing morning frost that carpeted the grass of our nearby campsite. By the time the crystal-coated blades had thawed out, the first wave of the day’s 1,800 cyclists was already spinning out of Laragh village and up the first leg of the race-course, a six-kilometre hill that topped out at a scenic mountain pass and the Shay Elliot recreation site.

The climb, a meandering, steadily rising road that wound its way teasingly around the hillsides, promised a summit at every bend that never materialised. And, as it continued, cyclists in their droves strung out along the tarmac, slowly shedding their frost-proof layers as their legs pumped rhythmically up the slope. Idle chit-chat increasing as participants moved further down the stream, from tight-lipped competitors at the front to the more casual pedallers at the rear, while my own spot was secured quite firmly at the very back – owed, of course, to my heavy mountain bike, not my fitness, I assured myself. It was a good excuse to cling on to.

At the top of the hill I racked my bike among the metal maze of other cycles. The views from here reached far south beyond the national park boundaries and, from the saddle where the road begins to descend again, I set off on the first run, through the trees and up to Braige summit (502m). Below, but out of view, I took hope from the 2000-year-old monastic round house that peeps above the pine trees in Glendalough Valley. The Wicklow weather and challenging mountain landscape may test your strength, but if you’re made of strong enough stuff it shows you can survive. That was the rather loose mantra I’d tied to discovering the ancient building among the mountains, anyway. Even today, the intriguing tower draws crowds and stands tall over the race's finish line. Not that its sheltered location in the bottom of the valley bared much relevance to the mountain passes I was struggling across now. And not that it helped competitors answer the crucial question itself… were we actually strong enough?

The 57 kilometres of Quest Glendalough is segmented into three cycling stages, four runs and a short, one kilometre kayak. At this first run, still feeling fresh, I bobbled and hopped across the thicket covering good ground and soaking up the breathtaking views of Glenmalure Valley. By the time I descended back through mud and trees to collect my bike, I’d made up several places from the back of the pack and set off on an exhilarating descent in a chirpy and positive mood. From here it was a freewheeling descent down a scenic, single-track lane to a dividing point in the road and the start of another gruelling incline.

At this point, as I took off up the testing Slieve Mann climb to Drumgoff Gap (the highest cycle point on the route at 450m), some competitors could gladly turn for home. The ‘expert’ 57-kilometre race, is just one of a trio of route options, with a 41-kilometre and 19-kilometre ‘mini’ event also on offer. The cleverly timed waved starts, meanwhile, meant that those going furthest – after some extra cycling and the magnificent climb to the summit of Croaghanmoira Mountain (667m), rewarding with views across a cloud peppered Wicklow – rejoined the masses at around the same time. The result was a fun-filled return towards the finish line with all of the day’s participants coming home at around the same time.

Before we could all stumble through the atmospheric finishing line in the grounds of the Glendalough hotel, however, and relax in the shadow of that mighty monastic round house next door, there was still the small matter of the last few stages of the race. Now massed together with a huge number of participants, the event took on a whole new sense of fun. By now the same blue skies of the morning had transformed the place from frosty and brittle to positively summery. We racked our bikes back at the Laragh sports pitch and set off on the penultimate run into the hills, enjoying the full warmth of midday and looking forward to paddling on the famous Glendalough lake.

The giant, sparkly waters lay sunning themselves at the bottom of a steep valley and, as we ran, gaps in the trees revealed our progress, gradually stomping towards the lake. By the waterside, double-kayaks came and went, with paddles and lifejackets handed out as participants partnered up and pushed out onto the loch. Single kayaks are provided for the fiercest competitors, while the rest of us buddied up and enjoyed the company of friendly strangers as we dabbled out onto the water, not usually open to boats. The exceptional weather and the sunlight, dancing around on its surface, made for an idyllic ending scene.

After the short-lived kayaking (at one-kilometre it slightly pales in comparison to the rest of the lengthy course), we dropped our life-jackets, picked up our back-packs and resumed our homeward run for the very last section of the race. Here the quiet trees, hills and valleys of the earlier course were suddenly replaced with a mass of people, thronging around the finish line in the sun, swilling complimentary cups of alcohol-free beer and cheering in the finishers. The old round tower still stood tall over it all. And after a rest, a meal and a hot shower, the only thing missing was a short walk down the valley to an ancient miners village at its end. Camouflaged among the boulder-strewn landscape of Glendalough, I conceded that, in fact, I was more like these miners homes than the tall, magnificent roundhouse after all. I was still standing. But utterly ruined too.

Quest Glendalough is one of multiple Quest Ireland events, with other locations in Killarney National Park (two races per year) and Achill. 2017 also sees the launch of Quest UK, with brand new events this year in Betws-y-Coed in Wales on 6th May, in Loch Ness in Scotland on 10th June and in the Peak District, England, later in the year (date tbc). All events include multiple length routes, ranging from 19 kilometres to 81 kilometres.

There are no campsites within Wicklow Mountains National Park itself but there are a couple of popular sites within relatively easy driving distance of Glendalough. Overlooking Vartry lakes and forest, Roundwood Caravan and Camping Park (00353 1 281 8163) has excellent facilities, friendly owners and caters well to campervans and caravans; it is 9½ kilometres from Glendalough. Hidden Valley Holiday Park (00353 86 727 2872), in Rathdrum, meanwhile, has a particularly pretty location for tent campers with grass pitches flanked by a meander in the River Avonmore. When the weather's warm you can swim and play in the waters – though bare in mind the Quest Glendalough event is only in spring when the waters are nippy to say the least. Hidden Valley is 11½ kilometres from the start of the race. Further afield, there is also the wonderfully back-to-basics, Raven's Rest Campsite (00353 87 248 6305) near Hacketstown on the Wicklow-Carlow border (probably too far away for this event but worth a visit more generally). And if you can't bear camping? There's an International Youth Hostel (00353 4 044 5342) in Glendalough itself.