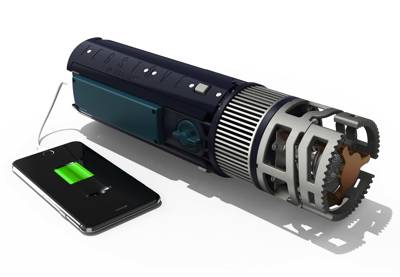 Tegstove: The Newest Camping Stove on the Market

It was on a family camping trip over three years ago that Spencer Turner had his first real light-bulb moment. Rumbling his way through Belgium, France and Spain in a 1972 VW campervan, he found himself stranded without a camping stove and unable to find a new one.

“The butane stoves available were either too small and flimsy or big metal boxes with cumbersome gas cylinders”, he tells us. “I thought ‘there has to be a better way’”.

Skip forward to 2016 and Spencer – a serial workshop tinkerer and DIY inventor – was appearing on TV screens across the UK, showcasing his solution on the BBC’s Dragon’s Den. His homemade creation: The Tegstove.

Butane-powered and sleekly finished with the look of an over-sized, Transformers-like AA battery, the Tegstove is a genuinely innovative new camping stove. While its flames are fuelled by regular butane gas cylinders, it’s the use of an in-built thermoelectric generator that really sets the stove apart.

The stove-top – broad and stable with a wide cooking surface – provides a consistent, controlled flame for cooking, while the pressure and temperature change within the gas canister – ordinarily a drawback – is instead harnessed by the thermoelectric generator. Sound complicated? Well the main thing you need to know is the result: a bountiful supply of electricity allowing you to charge phones, tablets and USB devices directly from your camping stove.

The idea is to cut down on the camping clobber. No longer do you need to bring all the gadgetry of solar panels and pre-charged power packs, just plug in your phone while you boil your camping cuisine and off you go. A large internal battery within the stoves stores any excess electricity, so even when you’ve finished cooking and switched off the flames your devices continue to charge, while a small platform on one of the extending legs lets you place your phone safely out of the way when cooking.

“I did get a grilling [on the show]”, Spencer admits. “I saw Dragons Den as a sounding board…  I had already put hundreds of hours and thousands of pounds into the project – should I have done that? Had I made a massive mistake? Were the Dragons going to quash the idea in one fell swoop?”
But with his engineering background and clear competence, Spencer gradually won the UK's top entrepreneurs over. The innovative use of ceramic plates – one hot and one cold – to generate thermoelectric energy, allowed the science of the stove to set it apart from others, while the ability to maintain a consistent flame (a problem with most butane stoves), made the Tegstove an all-round article.

By the end of his 45 minutes, Spencer had several competing offers in the den, each of the investors keen to get their stake in his idea. He left, contented and with the vital funds he needed, backed by the longest standing dragon on the show, Peter Jones.

"Regardless of the other offers on the table, Peter Jones, with his technical background and access to a vast distribution network, was clearly the best investor to have onboard." Spencer recalls.

And as to whether Peter Jones is himself a keen camper? "I don't know", is Spencer's honest answer, "next time I see him I will ask".

For more information about the Tegstove visit tegology.com. Available to pre-order now; price £149.99.