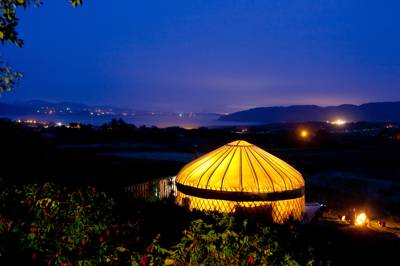 The best coastal camping and glamping sites in Ireland

From Donegal Bay to the far flung island of Cape Clear, these four fantastic Irish campsites are the ideal places to enjoy the coast

Ireland may be known as the Emerald Isle but it’s the deep blue shades of the heaving sea and the grey, formidable cliffs that provide some of the most memorable scenery. It's no surprise that just a few years after it opened, the Wild Atlantic Way has shot to the top of every newspaper’s ‘50 road trips to do before your die’ list. Few countries can really compete.

Camping or glamping on the Irish coast really does provide something for everyone. There’s a hardy surfing scene all year round, tourist-friendly harbour towns with homely pubs and traditional markets and beaches backed by footpaths that trail for miles around each lighthouse-tipped headland. Ireland’s diminutive size makes it easy to explore, regardless of the length of your trip, and the range of camping options is nothing to be sniffed at. From our growing stash of campsites in Ireland, here are just four coastal camping gems…

You can’t go much further north in Ireland than Portsalon, a bay-side village on the Fanad Peninsula where a long, sandy beach curves towards the North Atlantic. Pitched back up the slope with views across Lough Swilly, Mulroy Bay and the Inishowen Peninsula to the east, this two-year old glamping site is truly something special. Five secluded yurts come complete with wood-burning stoves, king-sized beds and futon-style sofas, while a separate building has a fully-equipped kitchen and living space. Facilities put most hotels to shame. Donegal's 1,235km coastline boasts 13 Blue Flag beaches (more than any other Irish county) while a seven-mile drive north takes you to dramatic Fanad Head, its lighthouse bearing the full brunt of the Atlantic elements.

At the opposite end of the country, Chléire Haven is another site of extremes – located at the most southerly inhabited part of the entire Emerald Isle. Eight miles from the mainland, the tiny island of Cape Clear is undoubtedly one of the most breathtaking locations out there. Natural contours provide shelter for wild flowers, gorse and heather, while, around the island's edges, grassy meadows spread. It’s here, overlooking the south harbour, that Chléire Haven campsite is located. For regular campers there are 25 pitches, protected by bushes around each tiered level and with tremendous views across the sea, while glampers can enjoy eight furnished yurts and three tipis. The island is a Mecca for whale and bird watching and the calm coastal waters are ideal for kayaking.

On the half way point of the Wild Atlantic Way, Purecamping is an eco-friendly site, with tent pitches, woodland camping and a spread of pre-pitched, partly-furnished bell tents. A separate campers' kitchen has a pizza oven, gas stove and solar-heated water, while the new facilities block features both indoor and outdoor showers. Thoughtful touches show the genuine enthusiasm of owners Trea and Kevin: A ginormous geodesic dome houses a space for kids to play and, when time allows, they gather campers beneath the morning sun for some soothing outdoor yoga. Walking, cycling and kayaking are all popular, as is lolling in the excellent Carrigaholt village pub.

Backed by the Darty Mountain range and overlooking Donegal Bay, Teapot Lane Glamping is as quaint as its name suggests. The site's four Mongolian style yurts lie in separate secluded spots, each beautifully adorned in a shabby chic style with soft, comfy bedspreads, bunting, scatter cushions, and the obligatory wood-burning stove, while an extra, red, retro caravan is the perfect romantic retreat for couples. There’s also an enchanting treehouse raised nine feet above the woodland floor – it’s equally luxurious inside. The site is just off the much vaunted Wild Atlantic Way and there are five spectacular sandy beaches within easy reach. The region is also something of a gastro hotspot; sample the best seafood at Ethina's By the Sea in Mullaghmore.