Even if Treganhoe Farm was the world’s worst campsite you’d probably still want to stay there. Simply for its location, the place stands head and shoulders above the rest. In the far reaches of Cornwall, it's a peaceful spot that's close to some of the area's best stretches of coastline. To the east, the beaches are a lengthy walk or a short drive away and the coastal landscape tumbles into quaint harbour villages like Mousehole – a treasure trove of narrow streets encircling a pearly cove. To the west, Atlantic-facing cliffs put on a magnificent water show as gigantic, crashing waves batter the rocks below, and aptly-named Land’s End stakes its marker as the most south-westerly point in all of mainland Britain.

Thankfully, of course, Treganhoe Farm is not the world’s worst campsite. Far from it, in fact. For a working livestock farm that’s now in its third generation, the place doesn’t scrub up too badly at all. It’s part of the Feather Down collection; a mini-chain of boutique glamping sites which champion off-grid farm stays in roomy safari tents (which they aptly describe as 'tented cottages'). Lit only by candles and oil lamps, the accommodation, provided by Feather Down, is invariably rustic and homely – with well-stocked kitchens, lovely log burners and cute kids’ cupboard bedrooms as particular highlights. And while the accommodation varies little from site to site, the farm experience is unique to each location and its farmer hosts.

At Treganhoe, those hosts are Sue and Ivor. They'll happily show you around and introduce the animals – though not each by name, which is understandable given there are 170 Holstein Friesian cows alone. They’re joined by sheep and pigs who are, in turn, accompanied by their babies in the spring and early summer. Time it right and you can while away hours on site bottle-feeding the lambs. Beyond the farm, the beaches will soak up the remainder of your time. There are plenty to choose from with Penzance’s Eastern Green Beach a particularly safe and popular spot. Or for an added wow factor try Lamorna Cove; rockier and far quieter than Penzance, it offers a wonderful hideaway from the crowds, a bit like Treganhoe Farm itself.

Each safari tent has three rooms: a double bedroom, a bunk room and the main living space within which is a cute cupboard bed that's suitable for younger children. The living space also has a fully equipped kitchen, a wood-burning stove, dining area and a sofa. Each tent has an en-suite bathroom with a shower and toilet. There is running water to both the bathroom and the kitchen sink. Outside each tent there is a sheltered veranda with two deck chairs, a picnic table and outdoor cooking area with a barbecue. The site has a shared pizza oven and outdoor play equipment too.

There are beaches in every direction with Sennen Cove at Land's End, Porth Curno, Marazion and Gwynver beaches all within a few miles of site, each around a 15-minute drive. It's about the same distance to one of the prettiest fishing villages in Cornwall, Mousehole, where the tiny harbour is backed by a tiered settlement – home to a couple of great pubs. To the south it's 20 minutes' drive to the amazing open-air Minack Theatre (01736 810181) or head north to National Trust owned Trengwainton House and Garden (01736 363148). Besides running wild in the meadow itself, the nearest activity is fly fishing (01736 786613) for trout and Arctic char down at Drift Reservoir (a 10-minute walk). For outstanding bird-watching, there is a hide maintained by Cornwall’s preservation society a 15-minute walk north west from Treganhoe. Don’t forget to bring your binoculars!

There's an honesty shop on the campsite selling local goods and the farm's own meat (when in stock). Pub-wise, the nearest spots are in Newlyn – try The Red Lion (01736 362012) or The Fisherman's Arms (01736 363399) – but picture-perfect Mousehole is worth the extra couple of minutes in the car. The Ship Inn (01736 731234) is a great, harbourside, traditional stone pub and the harbour wall is the perfect place to tuck in to fish and chips.

Treganhoe Farm has been farmed by the James Family for nearly 100 years. For much of that time the farm was predominantly dairy but the cattle you will find at Treganhoe now are mainly beef animals, along with some chickens and sheep.

Treganhoe is set within quiet and beautiful surroundings yet is only 1 mile from the A30 for easy access both to the farm and also to nearby beaches and other attractions.

Treganhoe is right next to Drift Reservoir which hosts fishing competitions and is popular amongst bird watchers having, on numerous occasions, attracted rare birds. Some years ago part of Treganhoe was purchased and flooded in order to make the reservoir as you see it now. When the water is very low you can sometimes see traces of gateposts and hedges.

All available accommodations will have private facilities. Our tents will be carefully cleaned, disinfected, and ventilated for you prior to your arrival.

If you or a family member are feeling sick or have been confirmed, we ask you to contact our booking office as soon as possible and for you to not come to our location. We will rebook your stay to another date.

When you arrive at the farm, please send only one person to report to the farmer/host.

During your stay, outside visitors will not be allowed.

The pizza evening has been adapted or cancelled

The farm tour has been adapted or cancelled i
We believe in simplicity, but rest assured you will not be sacrificing luxury when staying in our canvas lodges. At 45m2, our spacious lodges are placed in stunning locations and will meet your need for modern comfort and craving to be close to nature. The Canvas Lodge is suitable for 6 people, 5 adults and 1 child up to 12 years old.

Safari tent Sleeps 6 2 Available
We believe in simplicity, but rest assured you will not be sacrificing luxury when staying in our canvas lodges. At 45m2, our spacious lodges are placed in stunning locations and will meet your need for modern comfort and craving to be close to nature. The Canvas Lodge is suitable for 6 people, 5 adults and 1 child up to 12 years old.
Select Dates or Read More
Show more
Check Availability

From Penzance, take the A30 towards Land’s End. After about two miles you reach the hamlet of Drift, partway up the hill turn right towards Sancreed. Follow the narrow road past Drift Reservoir car park, Tregenhoe Farm is the next right turn after the reservoir.

The closest train station is at Penzance (five miles away). From there, you can take a taxi to site or board a bus towards Land's End, getting off at the Drift Crossroad, which is half a mile from Treganhoe Farm. 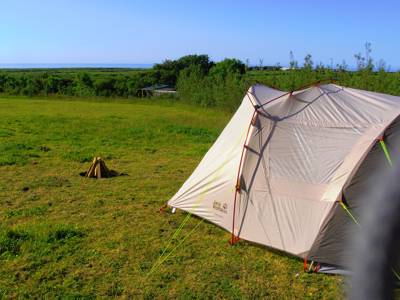 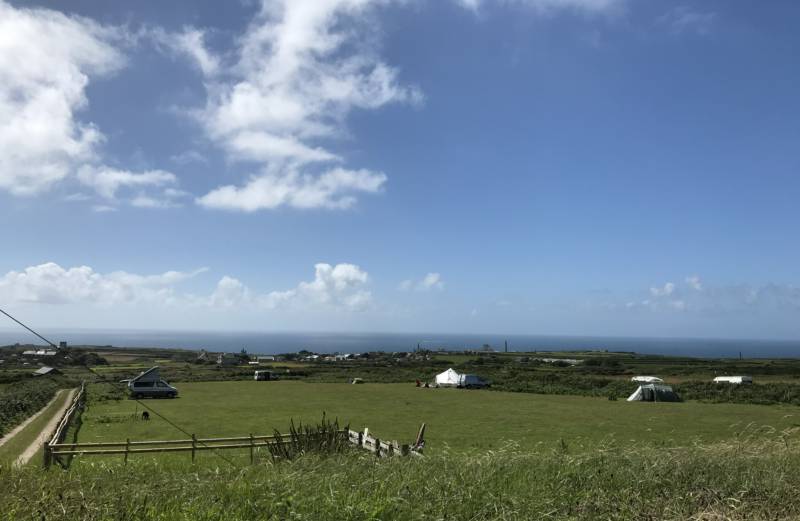