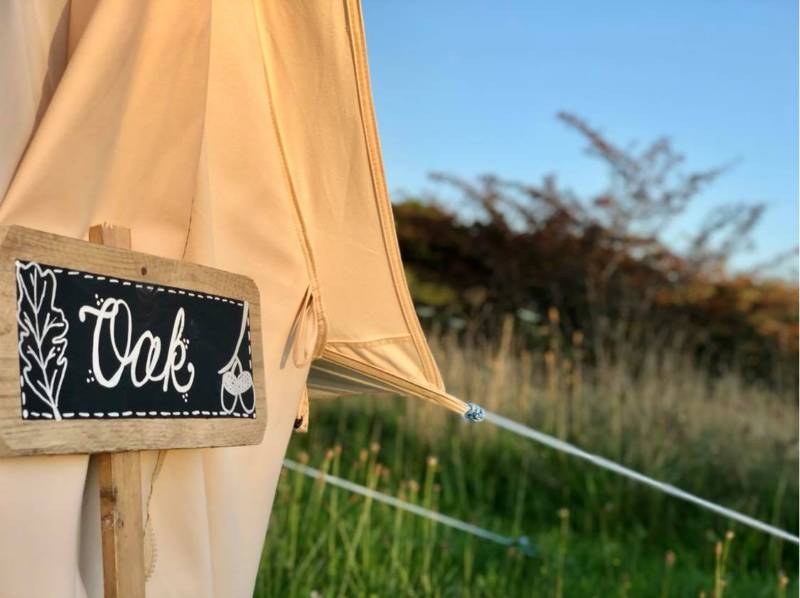 Oak is nestled among the meadow, in the same field as the kitchen, toilet, firepit, shower facilities, and two other 4 metre bell tents Holly and Elder. This bell tent is equipped with a double mattress rested on a pallet bed, linen, solar lighting, a recycled cotton throw, scatter cushions, floor rugs, bunting, a bedside cabinet and coffee sack floor cushions. Oak comfortably sleeps 2 adults. Guests can pay an extra 10 per night for upto one child. Off the ground child camp beds are available or guests are welcome to bring their own mattress or air bed. Guests are welcome to use the shared kitchen facilities and communal areas.  Read More

Karow Meadow is off-grid and surrounded by nature, but it is close to a road, which means that to explore beyond the site you're really first going to have to jump in a car. The central Cornwall location (nearest town, Bodmin) offers the best of both coasts since it's only a 30-minute or so drive either north or south to spectacular coves, harbours, and beaches. Liam and Ellie can point you to some of the less-visited spots, such as the fishermen's cottages and beach at Gorran Haven or the broad beaches and cliffs of the Roseland peninsula.

Historic Bodmin is only five miles away — the newest attraction is the immersive experience that is the 18th-century Bodmin Jail (01208 76292), where you can investigate the darker side of Cornwall's history. You're also right on the edge of dramatic Bodmin Moor (01872 322350), an Area of Outstanding Natural Beauty of unenclosed heathland, extensive peat bogs, and the granite hills known as 'tors'. Brown Willy is Cornwall's highest tor, at almost 1,400 feet — you can reach it from the Forestry England car park at Rough Tor (0300 0674800), about a 30-minute drive from Karow Meadow, around the western side of the moor. Bodmin itself also marks one end of the Camel Trail, an 18-mile, mostly traffic-free route from Bodmin to Padstow – a brilliant day out if you've brought your own wheels, but there are also bike rental places available in local towns, including Bodmin. For a gentler excursion, drive the seven miles east to Respryn Bridge (01208 265950) and amble through the woods on a circular trail through the National Trust's Lanhydrock Estate.

The nearest pub is the Lanivet Inn (01208 831212), but while it's only a mile and a half away, you'll have to drive as the road is too busy to walk there safely. It's a nice place to have as your local though, with good beers, a large beer garden, and a pretty good bistro menu, strong on locally sourced produce. Three miles the other way, at Inches, the farm shop at the Real Food Garden (07825 240677) is the place for sustainably grown seasonal veggies, herbs, salads, eggs, and bread. If you're out on the Camel Trail, the Camel Trail Tea Garden (01208 74291), halfway between Bodmin and Wadebridge, is a real gem you shouldn't miss — you can walk or cycle straight there (or park close by) and enjoy snacks, lunch or a cream tea in their charming apple-orchard cafe. Best fish and chips? Probably not where you think (ie, out on the coast), but a ten-minute drive to the Port and Starboard (01726 860270) at Indian Queens, for sustainably caught fresh fish and Cornish potatoes by award-winning farmers-turned fryers.

Use postcode PL30 5JA. After reaching Cornwall Services, from Newquay, drive along the A30 and take the exit towards Victoria/ Roche/ B3276.

National train and bus routes run to Par, Newquay, and Bodmin, from where there are local trains throughout the day to either Roche or Bugle train stations, which are both within five miles of Karow Meadow. You'll need a taxi from either station — book in advance with Harmony Private Car Hire (07909 558623). From Roche and Bugle, you can get to Newquay by train in 35 minutes, Par in 20 minutes, and Bodmin Parkway in 40 minutes.