Bed-and-breakfast-style glamping in a neat, off-grid shepherd’s hut close to the Northumberland coast

Your walking boots are sandy, your cheeks are rosy and your toes are warming nicely by the fire. After a long walk on Northumberland’s vast sandy beaches and a hearty meal at the nearby pub, the simplicity of candle-lit Lucker Mill Shepherd’s Hut feels just right. With this wholesome level of satisfaction, it probably won’t be long before you doze off. When you wake, in the full light of morning, the enchantment of the night before may feel like a dream until you open the door to find a little more of it. A basket of breakfast goodies has magically appeared on the veranda of your hut.

As far as we know there are no fairies at Lucker Mill Shepherd’s Hut – but there is a very good host; Laura, who has 20 years’ experience in the hospitality industry. In 2020 she decided to site a simple shepherd’s hut in the spacious garden of her B&B on the edge of the village of Lucker, as a place for people to get away from it all. Like the rooms in her B&B, it has a made-up bed, towels and even white fluffy robes, but out in the hut you’re further from the temptations of technology. It is off grid with no TV, no plug for your phone and no lights (save for tea-light candles, torches and the glow from the fire). It’s a deliberately simple space; a sleeping hut for two that’s closer to a traditional shepherd’s hut than some, with natural wood and whitewashed interiors. But, of course, this is a holiday and not the lonely sheep fields of yesteryear, so there are mod cons and facilities a short walk away. There’s an immaculate toilet, a shower and a kitchen with fridge, kettle, microwave (and the chance to charge your phone – should you choose to).

The kitchen is useful for tea, coffee, snacks and packed lunches but there’s really no need to cook here as you can walk, in less than five minutes, to local pub, The Apple Inn. It’s the easiest option if, like most people who come, you are out exploring all day. And with so much to do here, who could blame you? There’s proper walking if you head inland to the hills; The Cheviots, in the Northumberland National Park. They vie for attention as the main attraction but it’s the stunning Northumberland coast that most people come for: the vast beaches, the Farne Islands full of breeding seabirds and seals, and the brooding Borderland castles overlooking it all. Bamburgh is just three miles away and magnificent Alnwick, almost as well known for its part in the Harry Potter films as for its 1,000-year history, is 10 miles further. Lindisfarne Island, Berwick-upon-Tweed, and even Edinburgh are all day trips from here – places to inspire conversation under the Northumberland stars later and dreams while you doze by the fire.

The shepherd’s hut has a made-up double bed, a table and chairs, towels and robes for two. There’s a little log burning stove with enough wood for the two-night minimum stay (more is available to buy) and tea-light candles and torches for light. Outside there’s a fire pit and a gas barbecue for your use and guests have access to a separate, shared shower room and toilet, as well as a little kitchen with tea and coffee making facilities, kettle, fridge, microwave, washer-dryer, plates, cups, cutlery, utensils and, of course, the kitchen sink. There’s also plugs so you can charge phones and other accessories.

The vast beaches of the Northumberland Coast are just a few miles away and Bamburgh, with its iconic cliff-top castle (01668 214208), is one of the closest places to visit it. There are dozens of other castles worth visiting in the area; perhaps the best-known is Alnwick Castle (01665 511100), 13 miles away. Back on the coast, Seahouses (seven miles from site) is the fishing village to head for if you want to take a trip out to the Farne Islands, where you can see seals and huge colonies of sea birds nesting, including puffins, terns and guillemots. The ancient tidal island of Lindisfarne can be reached (at low tide) by a causeway, 15 miles from Lucker Mill B&B. There, you can visit the English Heritage-protected ruins of Lindisfarne Priory (0128 9389200) along with its associated museum as well as the National Trust’s Lindisfarne Castle (01289 389244). Fortified Berwick-upon-Tweed is about 20 miles away: great for a day out or to take a train over the Scottish border for a day out in Edinburgh, an hour’s train ride away. The Cheviot Hills within the Northumberland National Park are about 15 miles inland and a popular place for walking.

A continental-style breakfast basket is provided with all stays in the shepherd's hut. The nearby Apple Inn is a family-run, recommended gastropub (01668 213824) – just a couple of minute’s walk away. A little further, but not far (a mile-and-a-half walk across fields away), is The White Swan Inn at Warensford (01668 213453). For picnic or barbecue supplies, head to Belford (four miles away) or Seahouses for the Co-op and other shops.

Lucker Mill shepherds huts are set in grounds of owners garden, Lucker Mill House offers bed and breakfast for two couples with en-suite accommodation. Both sectors have private car parking for each unit. Lucker Mill is set in quite village with access to local Pub for evening meal and beauty complex open to non members. Bamburgh castle and beach is only 3 miles away and Alnwick Castle and garden 9 miles away.

Each hut is set out the same with double bed with bed linen, wood burner stove with wood supplied for 2 days and fold-down table with tea lights for the evening to sit on balcony with a glass of something nice! Remember there is no electricity in huts getting back too basics. Just short jump and skip over from huts shared toilet, shower and kitchen area with lights and electric plugs. The kitchen consists of a kettle, microwave, washing machine with drying pulley and fridge. Each hut has outside chairs to enjoy the outside world. Barbecue and fire pit is available for a warm evening watching starry night and wild life.

A single shepherd’s hut in the grounds of a Northumberland B&B. 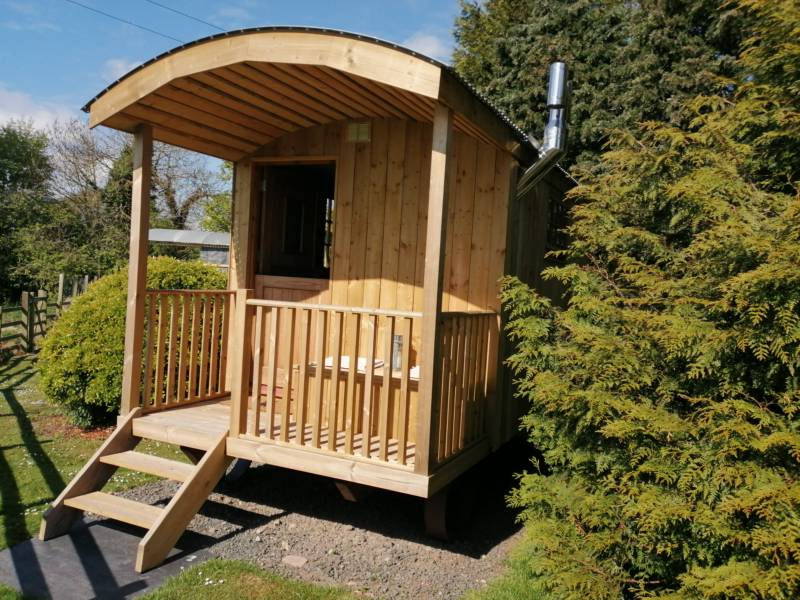 i
Set on quite part of garden sleeps 2 i
Set on quite part of garden sleeps 2

The nearest recommended railway station is at Berwick-upon-Tweed which has good connections to Edinburgh, Newcastle and beyond. From there it’s possible to take a taxi to Lucker B&B - but a car is recommended in this rural location. The nearest bus stop is a mile-and-a-half from site in Warenford.