Book campsites near The Shepherds Hut at Mill Granary 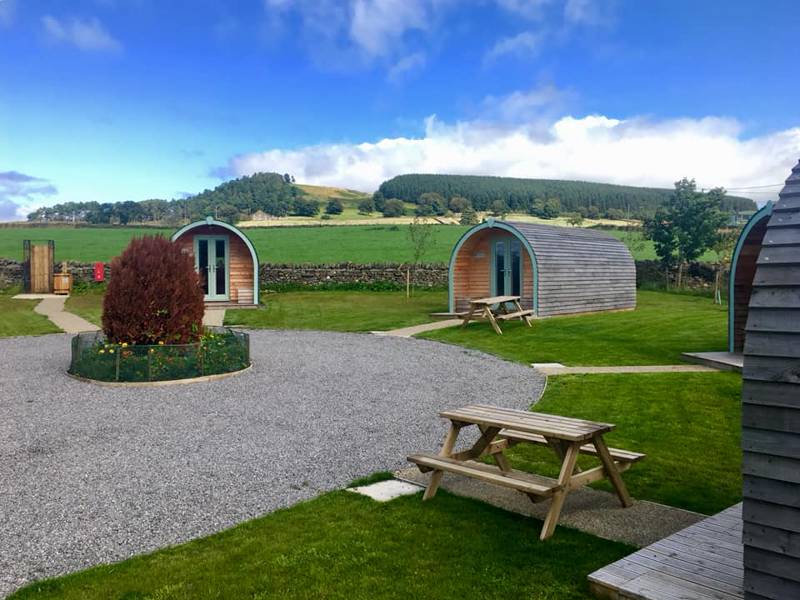 Glamping in Middleton in Teesdale 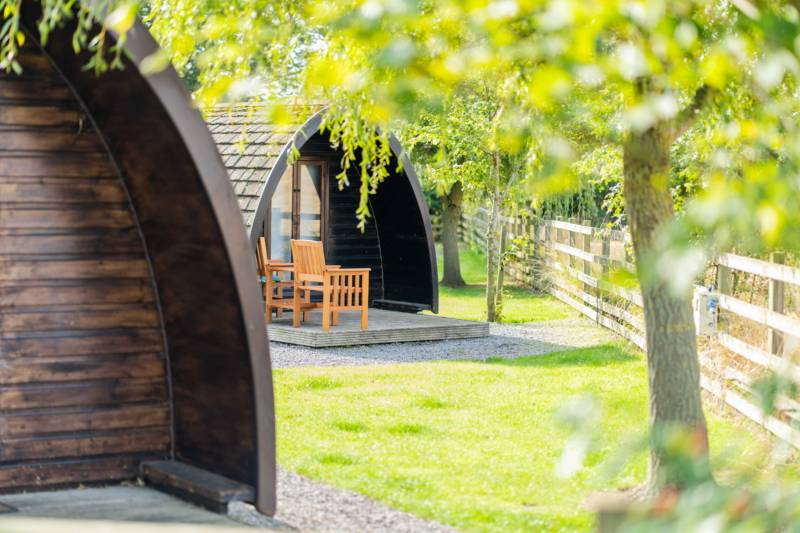 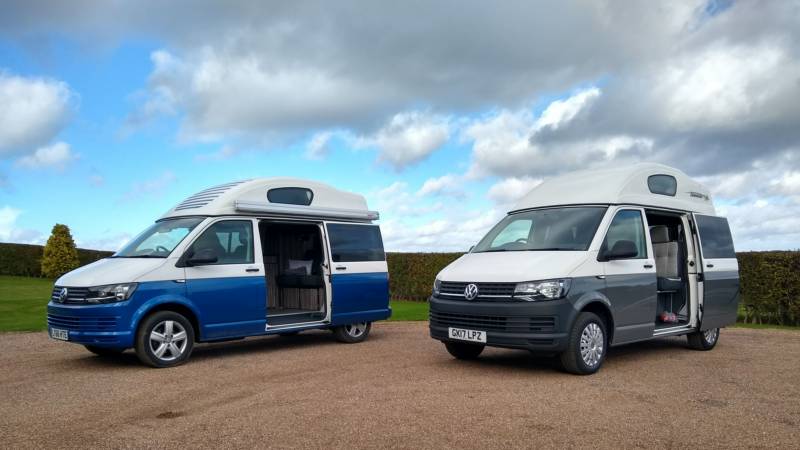 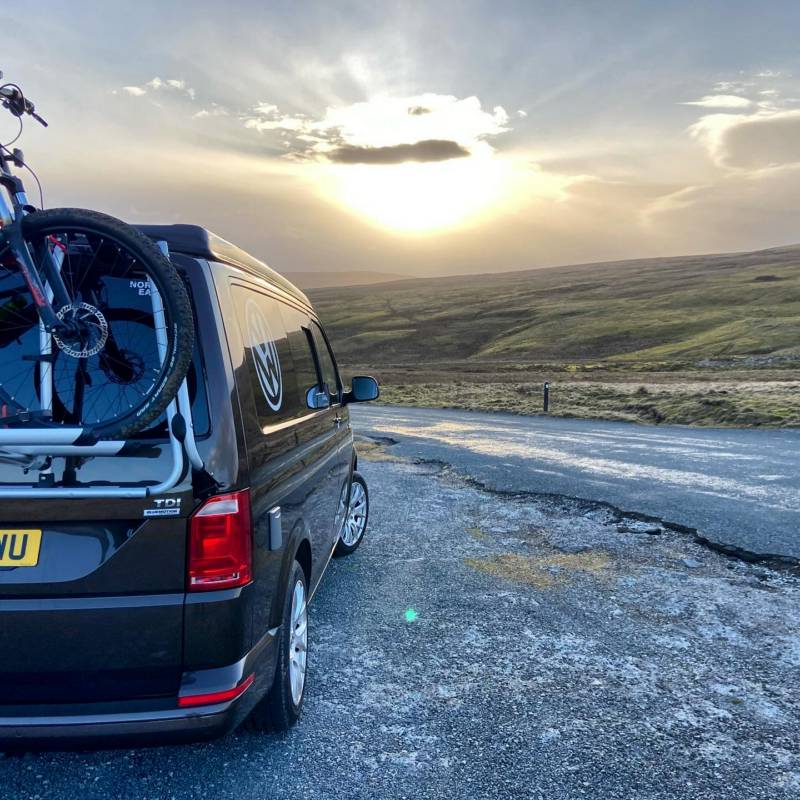 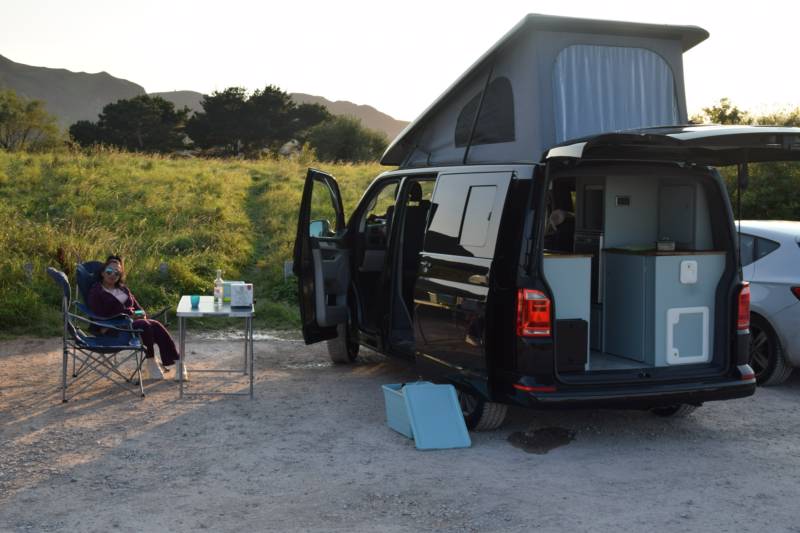 The Shepherds Hut at Mill Granary

Luxurious, rural living subtly squeezed into a traditional shepherd's hut with a fabulous location on the edge of County Durham

When Kate and Richard Hodgson decided to diversify their 330-acre dairy farm in 2004 it was converting the old agricultural barns that made most sense. The farm’s prime location between the North Pennines, the Yorkshire Dales and the North York Moors, made it an obvious destination for travellers and, after painstaking work, the farm’s disused, 19th-century granary was opened as a five-star lodging with much success. Roll on more than a decade and every inch of that same formula – the beautiful Tees Valley location, the heritage of the farm setting and, yes, the luxury, is now echoed in the brand new addition to their enterprise: A traditional shepherd’s hut, chock full of traditional decals and details but with a healthy dose of modern comforts.

Looking out across the valley, with excellent views from the windows and stable door, this single shepherd’s hut is a real masterpiece of design. Outside it has a wonderfully traditional appearance; the corrugated roof curves over the wood-panelled exterior, while smoke drifts from the small chimney spout that pokes from the roof, feeding down to the homely, cast-iron wood burner. Inside, however, while the details have a real farmhouse feel – prints of hares and Yorkshire rams adorn the walls – the place is a thoroughly modern affair. A frosted glass door leads through to the en suite bathroom (it has an excellent power shower), while the built-in king-sized bed is cocooned at one end of the hut with an HD television above and a circular, porthole window looking out across the farm.

In all, Kate and Richard have taken the style of their luxury, five-star cottages and compressed it into the cosily romantic confines of this shepherd’s hut. From the functional kitchen space to the private garden outside, there’s nothing more you could need. And from the doorstep, of course, the world of England’s North East is your oyster. Romp along the farm’s footpaths to The Raby Hunt, the region’s only two Michelin starred restaurant, just over a mile away, or hop in the car to visit the magnificent High Force Waterfall. If it rains there are the museums of Barnard Castle to occupy you and the grand interior of Durham Cathedral, a 35-minute drive away. Or you could simply stay put around the wood-burner, listing to the raindrops drumming on the rooftop and enjoying the simple pleasures of living in this shepherd’s home from home.

The hut is well insulated and has central heating and is fully en suite, with a proper power shower, a toilet, a basin and a towel warmer. The hut has a king-size bed, ample storage and a kitchen area with a twin hob and Neff conventional oven with grill and microwave, a fridge, a granite work top and a breakfast bar and two stools. There’s a TV, sofa, Roberts radio and a hobbit wood burning stove – plus a gorgeous oak floor throughout. A stable door leads onto a large decking area with bistro table and chairs and outdoor sofa. Private parking area and a garden with views.

It’s just under 10 miles to the edge of the North Pennines Area of Outstanding Natural Beauty, while the Yorkshire Dales are also within easy reach. Though these hiking hot-spots are on the doorstep, you needn’t travel that far for a good walk, with plenty of excellent routes from just outside Mill Granary itself. On the way to the North Pennines, stop of in Teesdale for a walk around the elegant old town, then continue on to the impressive High Force Waterfall (01833 622209) – one of the most spectacular waterfalls in England. Closer at hand the town of Barnard Castle (9 miles) is also worth a day of your time. It offers a host of independent shops, cafés and pubs, plus the medieval ruins of the 12th century castle that gives the town its name. It is also home to the intriguing Bowes Museum (01833 690606). Designed and purpose-built as a public art gallery by the French architect Jules Pellechet and opened in 1892, the museum has the striking appearance of an opulent French chateau. The 35-minute drive to Durham city is also a must. The tumbledown city on the banks of the River Wear has plenty to occupy you, from the grand cathedral (0191 386 4266) and museums, to free guided walks and more.

It’s 1½ miles to The Raby Hunt restaurant (01325 374237), housed inside a beautiful grade II listed building in the pretty village of Summerhouse, and the nearest of the best local restaurants. It’s 4 miles to The Fox Hole (01325 374286), a top-notch gastro pub with a relaxed “Wellie” bar as well as the elegant dining room and terrace. It’s a mile further to the Bridgewater Arms (01325 730302) in Winston – a few minutes walk from the village’s landmark bridge over the river Tees.

My husband and I are recently back from a great 3 night stay in the Shepherd’s Hut. The Hut is in a beautiful location (with a wheat field quite literally on its doorstep!) with fantastic surrounding views. It is cosy, comfortable and has everything you could need. Kate was welcoming (home made scones on arrival!) but also left us to it. There’s plenty to do in the local area- we cycled to Durham from Bishop Auckland; visited High Force waterfall; enjoyed wandering around market town of Barnard Castle etc. But the Hut is really great for switching off (no WiFi! Though good 4G coverage) and relaxing! We hope to be back!
★★★★★

Get away from the world and go to paradice

My husband have traveled the world , we have never found a piece of Paradise, as the Shepherds hut , if you want a quite , romantic, place ,this is your place . will defiantly back
★★★★★

From start to finish our experience of the Shepard’s Hut was fantastic. The Hut is self has everything you need, the owner has everything covered, all you need to bring is your clothes, toiletries, some food (and drink of course haha) and yourselves! We came end of September so it was a little chilly outside especially in the night but inside it was toasty warm! We didn’t even need the heating on that much! The shower is amazing and the bed is massive and so comfy. There is no WiFi but 4G and phone signal is strong so if you need to contact the social media world while away you still can. There’s plenty to do in the area, local pubs for food and drink, places to visit for a nice day out, nice walking areas, Middlesbrough isn’t far at all (40 mins drive) if you want to do a bit of shopping and the parking is very reasonable in Middlesbrough town with plenty of good shops around! If you fancy staying in the Hut all night but don’t want to cook there are take aways in the area that deliver. The owner even went that extra mile for me and helped me with a little surprise for my companion for the weekend! We will DEFINITELY be returning to the Shepard’s Hut for another stay! Can not fault it!
Show more