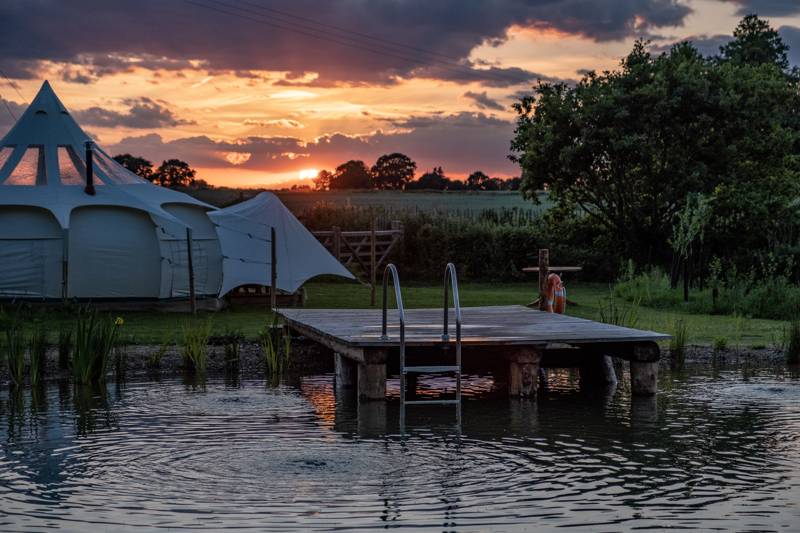 In a county pimpled with National Trust estates and grand country manors, it seems only right to go glamping somewhere historic. Surrounded by the moat of old Haveringland Hall, this luxury Norfolk retreat certainly fits the bill. The site has, in fact, been home to no fewer than three great halls over the years – one medieval, one 16th century and a final version built in the late 1800s. Today, the medieval moat surrounds not bricks and mortar but canvas quarters instead; a collection of Lotus Belle tents quite unlike anywhere else.

10 miles north of Norwich, Moat Island Glamping is comprised of five Lotus Belle tents, each sleeping up to four people and situated around the old moat. Inside, they’re kitted out with all the comforts you could need – double beds, wood burners and, in the two ‘Stargazer’ tents, clear ceiling panels so you can stargaze from your bed. Outside, meanwhile is Moat Island’s pièce de résistance, a naturally filtering swimming pond with a jetty you can jump in off.

The swimming pond is not quite as natural as it may first seem – it’s about two metres deep and is actually man made – but it has the very same beauty and ecology. Wetland plants grow along the shallow edges, attracting dragonflies that dance around as you swim, and a couple of old milling wheels lend extra olde world charm. In one corner, bubbles rise as if there’s a breathless crab beneath the surface. It’s a small pump keeping everything oxygenated and encouraging the plants to grow.

The eco system the pool creates is just one sign of the effort made here to keep things green and nature friendly. Along with a set of super luxurious washrooms, with flushing loos and powerful showers, there are compost toilet options closer to your tent. The overgrown Christmas trees, meanwhile, that once covered the car parking area, have been re-used around the site to build small footbridges and in the top-spec outdoor kitchen, which features a range oven, Smeg fridge-freezer and a pizza oven, the work surfaces have all been made from snooker-table slates. The resulting effect is a setting with history and wildlife but also a glamping site with a real sense of the cutting edge.

Beyond the boundaries, the immediate surroundings are a quiet backwater. It’s best to make the most of it on foot or by bike. The Marriott’s Way is just down the lane – an old railway line that’s now a beautiful, car-free, greenway into Norwich – or you can head of north to the market town off Aylsham and the National Trust’s Blickling Estate (you can hire bikes at the latter). By car, meanwhile, the North Norfolk Coast becomes eminently reachable, as do the waterways of the Broads. Not that you need the River Bure or the popular swimming spot at Horstead Mill to get your fix. You’ve got the coolest swimming spot in the country already.

Tents sleep up to four people with a proper master bed and then the option of futon or sofa-bed-style extras (bedding, linen and towels provided for all except in the BYOB Stargazer). Tents also have electricity, storage, seating, rug floors, wood burners, kitchenwares and a kettle, plus, in the stargazer tents, clear panel ceilings for enjoying the night sky. Luxury toilet and shower block (two toilets and two showers in each of the ladies and gents), plus compost toilets dotted around the site. An outdoor communal kitchen with a fridge freezer, range cooker, sink, pots, pans, utensils and a big long dining table. Campfires allowed and BBQ provided. Natural swimming pool.

Glamping only. Dogs, rowdy groups, stag and hen parties are not permitted.

10 miles from Norwich, 10 miles from the Norfolk Broads and 15 miles from the coast, Moat Island Glamping is outside of the honeypot spots – it's quiet and rural around Haveringland – but well placed to make the most of them. It's a half-hour drive to the best of the beaches and 20 minutes to Coltishall where you can rent canoes (or 25 to Wroxham which is a bigger boating centre). There are other attractions closer to home: The National Trust-owned Blickling estate (15 minutes; 01263 738030) is a great place to go for a walk. The pay-to-enter gardens and house are full of history or you can just explore the wider estate (free apart from the parking) and have a picnic beside the lake. There's a good café in an old stables beside the car park, too, and a decent pub. The National Trust also owns Felbrigg Hall (01263 837444) and Sheringham Park (01263 820550), both 30 minutes away. Just down the road from Blickling, pretty Aylsham has a farmers market in the main square on the first Saturday of each month and has several good cafés. It's also the end of the line for the Bure Valley Railway (01263 733858), which runs between Aylsham and Wroxham, one of the main towns in the Norfolk Broads. It's worth getting a ticket and hopping off at a few stops along the way. There used to be a second train line but this is now the Marriott's Way, which is just a stones throw from Moat Island Glamping. Glampers with bikes can hop on the flat trail and pedal all the way into Norwich (it takes around an hour), where they can enjoy the cathedral, castle, the lanes and the beautiful city centre.

There's an excellent steak house, The Ratcatchers (01603 879729), a 15-minute walk down the road, while the nearest watering holes are a drive away. The Kings Arms in Reepham (01603 870345) is a 17th-century coaching inn with many of the original features and great character – Woodforde's Wherry is the locals' favourite on tap. The Bell in Cawston (01603 871216) has a fantastic beer garden out back on a summer's day. And The Black Boys in Aylsham (01263 732122), overlooking the square, serves hearty portions and has outside seating that's particularly pleasant on weekend market days.

We have beautifully furnished 6 meter Lotus Belle Tents situated on a medieval moat and around our gorgeous natural swimming pond. Located in Haveringland, a beautiful part of central North Norfolk we are close to beaches, the fine city of Norwich and close by to lovely little market towns like Reepham, Aylsham and Holt.

The nearest mainline station is in Norwich, from where buses run to Aylsham, Cawston or Reepham. However, this is a rural spot and there's no decent bus service to Haveringland itself. Moat Island Glamping is just a 5-minute bike ride from the Marriots Way, however, which follows an old railway route all the way into Norwich. It makes Norwich train station a 12-mile cycle from the glamping site. Moat Island Glamping is also less than 20 minutes by car from Norwich Airport.

We have just returned from a 3 night stay at Moat Island Glamping. This was our first Glamping experience and we all thoroughly enjoyed it. The Bell tents were very comfortable, clean and spacious. The measures put in place to keep everyone safe were excellent and worked well! The site was a nice size, well maintained and the staff members friendly and polite. We cannot say anything bad about it and feel totally converted to Glamping from now on although I do feel we went in right at the best so not sure other sites would be as good. All in all would love to stay again!
★★★★★

There are so many things to recommend about this glamping site. We stayed in the furnished stargazer with comfortable beds, warm bedding and everything you could possibly need for a relaxing stay. The kitchen area was well equipped, the bathrooms immaculate and the site manager was really friendly and accommodating. However the best thing about Moat Island was the wild swimming pond (even my nature-sceptic teenager agrees). The water was warm, clean and there is nothing better than floating around while dragonflies whizz above your head.
★★★★★

We had an amazing couple of nights in the Elm yurt. The place was beautiful, fully equipped and very relaxing- we will definitely be coming back!
★★★★★

This was our first ever glamping holiday. We stayed in a furnished stargazer tent. We loved the pool, the kids wore shortie wet suits for warmth. The facilities were fabulous, great showers, kitchen, wood burner, campfire, super comfy beds and duvets. The site is so well designed looked beautiful, particularly at night with fairy lights. Falling asleep listening to the owls and staring at the stars was a magical experience.
★★★★★

The place was incredibly amazing!! We liked how the lotus bell tent set up. The staff, Roy and Lewis are very accommodating. My kids enjoyed the bonfire and barbecue. We loved the experience of being much closer to nature. It was very relaxing and peaceful holiday. Highly recommended to everyone!!!
Show more 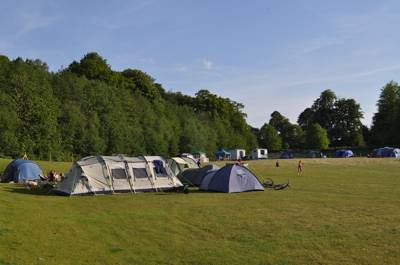 Just a stone's throw from beautiful Norwich, this wonderfully laid back site is your gateway to the famous Norfolk Broads 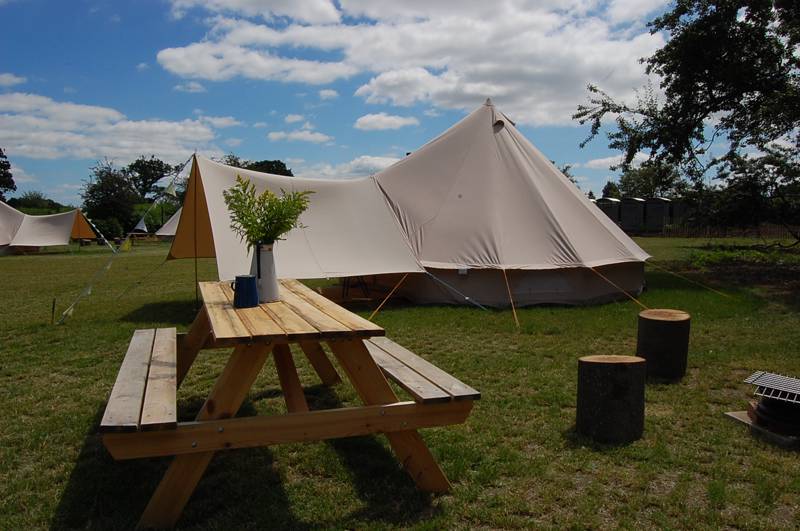 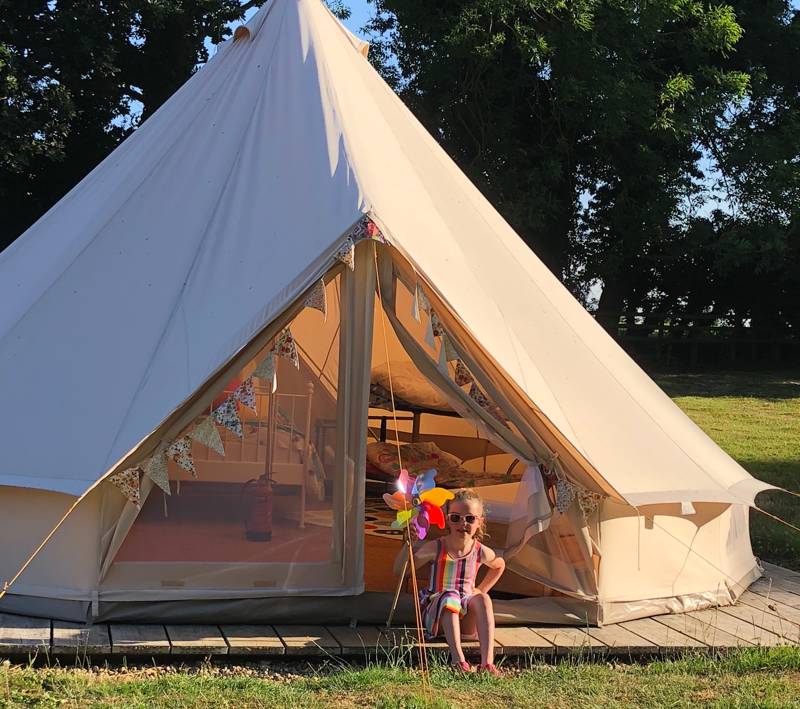 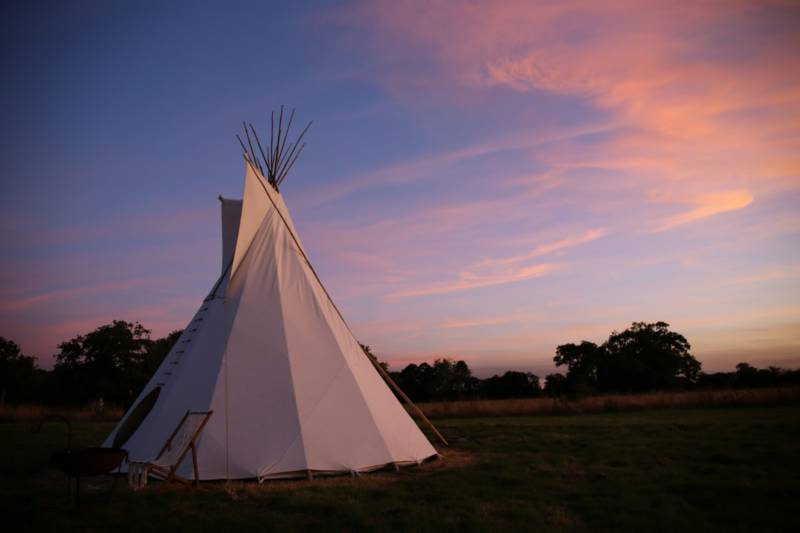 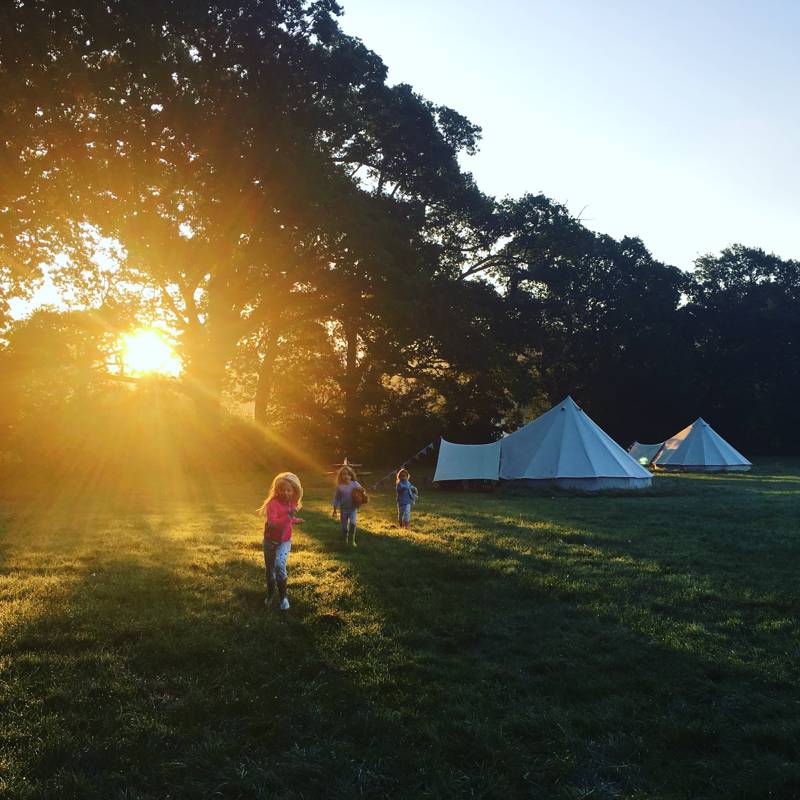 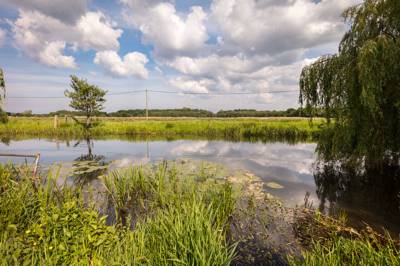 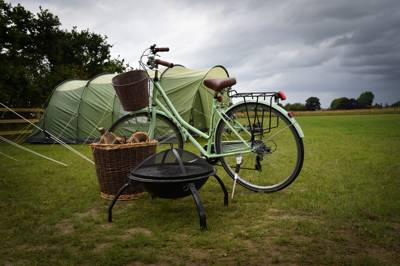 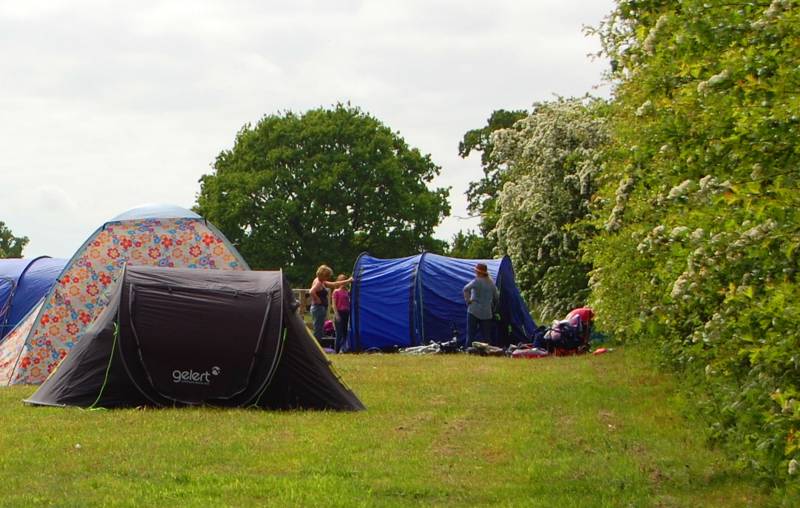 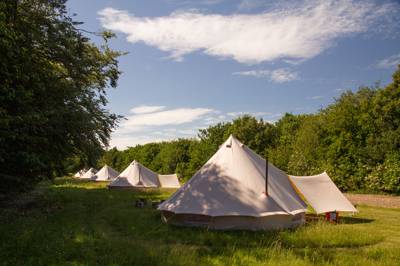