From airport to bus stop, tourists to the Emerald Isle are bombarded with the oh-so-ubiquitous posters for the Wild Atlantic Way (hey – if you've got it, flaunt it). Arguably, nowhere encapsulates this picture postcard image of Ireland more than Donegal. A favourite holiday destination for the Irish themselves (always a testament to the enduring appeal of a place), County Donegal has some of the most awe-inspiring natural wonders in the entire country – it's a photographer's dream. See that rugged coastline with epic edge-of-the-world views? That's Malin Head, Ireland's most northernly tip in County Donegal. Or how about that death-defyingly narrow tightrope of a mountain precipice? That's One Man's Path on Slieve League on Donegal's western Atlantic coast. Or perhaps the art department opted for the golden sandy sweep yielding to tranquil azure waters, the whole scene hugged by the sheep-dotted, serpentine coastal road. Yep, you guessed it – north Donegal's very own Ballymastocker Bay at Lough Swilly. This was voted by those well-travelled people from The Observer as the second best beach on the entire planet, pipped to the post by some spot in the Seychelles. Well, as stunning as that Indian Ocean paradise undoubtedly is, there's a glampsite overlooking the lough that would make us think twice about where we'd rather spend our summer hols...

It's hard to believe that Portsalon Luxury Camping has only been up and running since Easter 2014. So slick is the experience of staying at this über-luxe Cashelpreaghan retreat, you'd think charming owners Helen and Sean were old hands at the glamping game. Not for nothing was Portsalon Luxury Camping awarded “Best New Business in Donegal 2014”. More recently the site has been selected as amongst “The 15 Best Campsites in Europe”. This 18 acre site on the Fanad Peninsula enjoys spectacular views of Lough Swilly, Mulroy Bay, Knockalla mountain and the Inishowen Peninsula to the east. The five yurts are perfectly positioned for the uninterrupted coastal vistas this secluded site affords. All are immaculately presented, complete with wood-burning stove, king-sized beds and double futons sleeping up to six people. Each have their own firepit for both chillin' and grillin' – Helen and Sean kindly offers guests some of the lovely organic produce they grow, and free-range eggs are available daily... providing the girls feel like laying, of course – the pace of life here is pretty lazy after all.

Facilities put most hotels to shame with hot, wet-room showers, and flushing toilets housed in a separate building. There's a fully-equipped communal kitchen and dining area – more upscale B&B than the al fresco camping kitchens of most glampsites. The adjoining lounge and cosy reception area comes well-stocked with a selection of books and local info to flick through by the fireplace. It's a good job the sofas here are the big comfy kind you can sink into because deciding where to visit first may take some time.

Donegal's 1,235km coastline boasts 13 Blue Flag beaches – more than any other Irish county. The famous Ballymastocker is just a short stroll from the site. It's flat and vast and never feels overcrowded – brave the hairpin bends of the Knockalla coast road for a perspective of the neighbouring peninsulas. In contrast to this contemplative stretch of coastline, seven miles north takes you to Fanad Head, its lighthouse bearing the brunt of the Atlantic elements – a truly dramatic setting. Head inland and you'll continue to be wowed by Glenveagh National Park, Ireland's second largest.

Portsalon Golf Course is just a putt away if you fancy giving Rory McIlroy a run for his money. For a taste of Ireland's other national obsession, head to MacCumhail Park in Ballybofey to see Donegal's GAA football team in action. In case the green and gold flags adorning even the remotest of rural lamposts didn't give it away, GAA is serious business here. There are fewer atmospheres that can match this place in an All Ireland cup game. And whether or not the Tir Conaill Men walk away with the Sam Mcguire cup, we know one Donegal glampsite worthy of a trophy or two.

Suitable for couples. We are currently taking provisional bookings for two adults per yurt only for 2021. This will allow us to adhere to strict COVID-19 safety protocols for optimum safety. Sorry but we cannot accommodate family bookings during the pandemic. We will take a 10% deposit at the point of booking which will be refundable in the case that we are not open for your selected dates. The site is in a rural location and the focus is on peace and quiet. Great for couples, single travellers and shielders.  No overnight adult groups and adult party groups. Sorry but we have a strict no pets policy. We are unable to accommodate tents, caravans, motorhomes or campervans.

Donegal has 13 Blue Flag beaches, more than any Irish county. The 3-mile long sandy stretch of Ballymastocker Bay (just 1 mile from site) is one of the most spectacular, sweeping from Portsalon to the Knockalla coast road. Just 7 miles from the site to the north is the Fanad Head lighthouse, a great spot for whale watching. Nearby Ballyheirnan Bay is home to Adventure One Surf School (00353 87 628 5565) – all abilities welcome. Five Fingers Strand on the Inishowen Peninsula boasts some of the highest sand dunes in Europe – a great spot for some seaside solitude. While even further east, Kinnagoe Bay is a top spot for sea fishing, with the Armada shipwreck of La Trinidad Valencera a magnet for pollack, dogfish, bass and flounder. Donegal Bay Waterbus (00353 74 97 23666) runs 75-minute tours, departing from the pier in Donegal Town (around an hour's drive) – make sure the camera's charged for snaps of the seal colony and Bluestack Mountains. Glenveagh National Park is Ireland's second biggest. It's home to the country's largest herd of red deer and the formerly extinct golden eagle were reintroduced into the park in 2000.

Complimentary organic fruit, veg and free-range eggs are available to guests in season. The well-equipped communal kitchen has everything you're likely to need, with the Gala convenience shop supplying a wide array of groceries, plus a deli, off licence, and takeaway pizzas at weekends. The Narrow Quarter is a cracking wee eaterie which serves hearty Irish fayre. Warm up with a steaming hot pot of Mulroy Bay mussels after a day spent in the surf, then pop in to The Stores Olde Worlde Bar for a pint of Guinness in the fireside snug. You need to have at least one night of excess on your holiday, and Rathmullan House (00353 74 915 8188) is the perfect place to splurge. This early-19th century, 4 star country house hotel hosts The Cook & Gardener Restaurant. This is sophisticated cuisine celebrating the best of Irish produce, with the all ingredients either locally sourced or grown in Rathmullen's Walled Garden.

Five cosy yurts with spectacular sea and mountain views. The site is carefully laid out to offer maximum privacy and really is a little piece of heaven. Sean and Helen Coll are the hosts of the site and offer a warm welcome. They tested out their original yurt for 8 months during 2012 so have plenty of tips for what you might need and they really have thought of everything!
We are currently taking provisional bookings for two adults per yurt only for 2021. This will allow us to adhere to strict COVID-19 safety protocols for optimum safety. Sorry but we cannot accommodate family bookings during the pandemic. We will take a 10% deposit at the point of booking which will be refundable in the case that we are not open for your selected dates.
Read More

Five yurts - each suitable for one or two adults.

Portsalon Luxury Camping is the perfect choice for a peaceful and relaxing break. 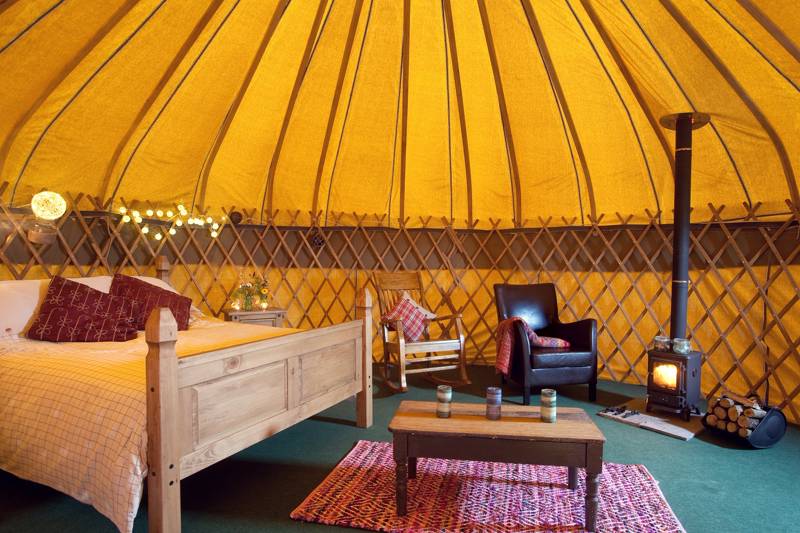 i
Perfect yurt for those new to camping and glamping. Mulroy is our largest yurt with king size bed. It is situated about 20 metres from the facilities blocks and so is most suitable for those who want very easy access to toilets etc during the night time.

Yurt or Ger Sleeps 2
Perfect yurt for those new to camping and glamping. Mulroy is our largest yurt with king size bed. It is situated about 20 metres from the facilities blocks and so is most suitable for those who want very easy access to toilets etc during the night time.
Select Dates or Read More 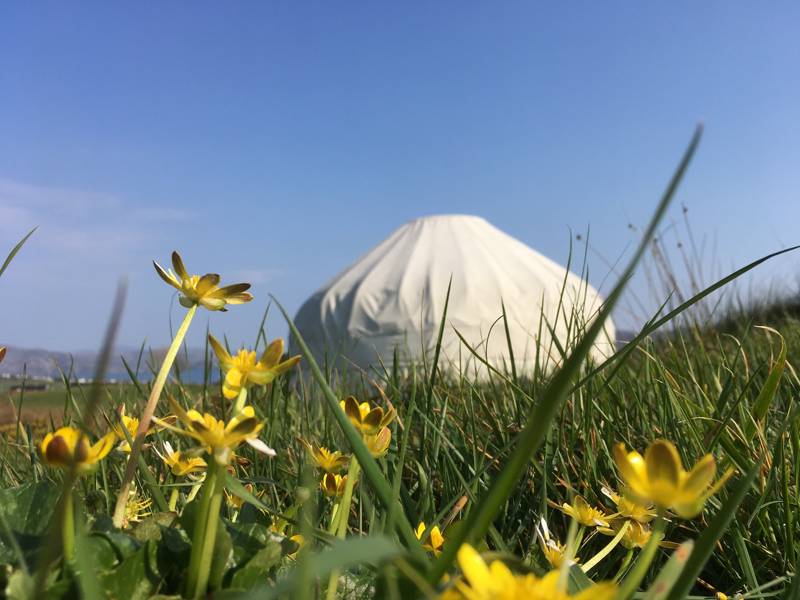 i
Lovely cosy and romantic yurt - peaceful and secluded. Ballymastocker yurt is situated in a picturesque spot with fabulous views of Ballymastocker strand and Knockalla mountain. 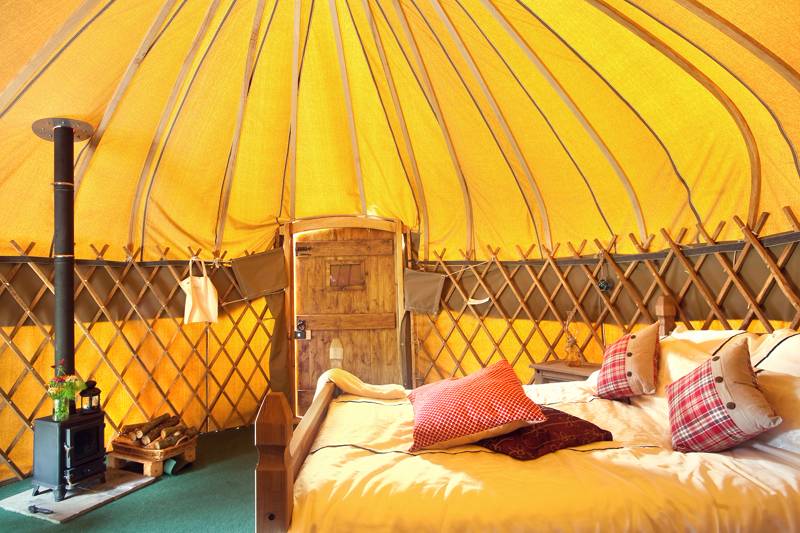 i
Gorgeous, cosy two person yurt. It is a cosy and romantic yurt and situated lower down on our site. It has a perfect view of the sunrise and fabulous views of the bay and of Knockalla Mountain. It is furnished with a comfy king sized bed with luxurious bedding.

Yurt or Ger Sleeps 2
Gorgeous, cosy two person yurt. It is a cosy and romantic yurt and situated lower down on our site. It has a perfect view of the sunrise and fabulous views of the bay and of Knockalla Mountain. It is furnished with a comfy king sized bed with luxurious bedding.
Select Dates or Read More
Show more
Check Availability

From Letterkenny: At the 'Pole Star Roundabout' (circular sculpture made of telegraph poles) take the 3rd exit R245 signposted for Ramelton and Milfod. Continue to Ramelton approximately 7 miles. At the T-junction in Ramelton take a left and follow signs for Milford. Half a mile after the Milford Inn take the right turn for Kerrykeel on the R246 (this is immediately after a large Lidl supermarket on your right). Continue on for about 4 miles to the village of Kerrykeel. At Kerrykeel turn left past Paddy Mors pub and follow the shore road north along the banks of Mulroy Bay. Continue on for about 7 miles and you will arrive in Portsalon village. Look out for a crossroads with Dunleaveys XL and the Blueberry and Barnacle Café and restaurant on the corner. At this crossroads, take the left hand turn up a steep hill. The entrance to Portsalon Luxury Camping is on your right hand side approximately 1 mile up this road – look out for the sign post.

Follow the signs up the lane to the reception.

There are buses daily from Letterkenny to Portsalon. This is a new rural transport service with the following current times: 7.45am Portsalon to Letterkenny; 5.45pm Letterkenny (departs from outside ‘Mr Chippy’ on the Tesco roundabout) to Portsalon.

An amazing and relaxing experience

What a beautiful place! The yurts are cozy and the views are spectacular. I didn’t really know what to expect, having never been glamping before, but Helen and Sean made sure we were comfortable. Some incredible sights to be seen were a quick drive away, and the facilities are top notch. Bonus points for the large amount of cute animals. We’re already talking about coming back!
★★★★★

Stayed in the Mulroy yurt, it was very spacious and everything you needed for a weekend glamping with a baby. The wood burning stove is a lovely touch and the bed very comfortable. Very close to all facilities. The shower block and toilets were immaculate and the kitchen facilities brilliant. Loved the fresh eggs in the morning. Looking forward to returning.
★★★★★

I have stayed here on a few occasions, a great site, the yurts are luxurious, comfortable and well equipped, the overall facilities are first class, and the location is fantastic. Its a little bit of heaven in north Donegal and well worth a visit. Helen and Sean are amazing hosts. I hope to be back again soon.
Show more