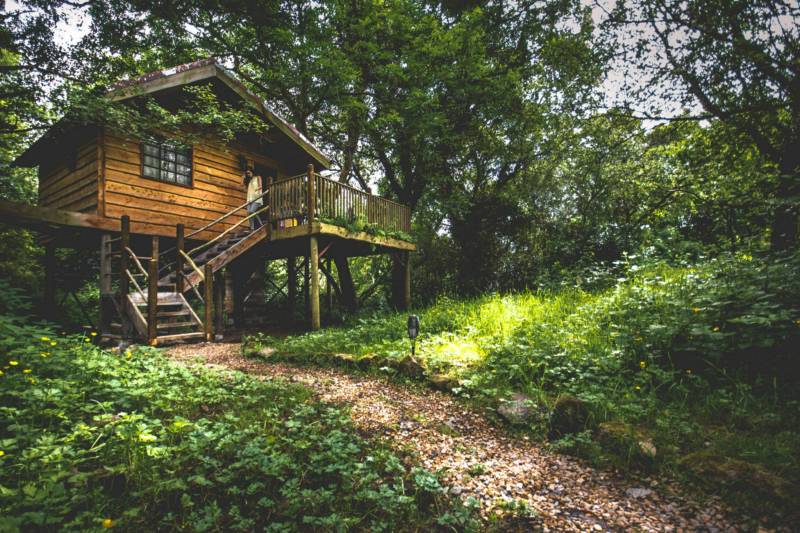 Situated in the shadow of the towering Benbulbin seems a rather foreboding setting for a glampsite as delightfully quaint as Teapot Lane Glamping. But then again, experiencing a landscape bestowed with as much awe-inspiring eye candy as Ireland's north-west nook can leave visitors feeling, well... a little in need of more homely comforts to bring them back down to earth. And in this perfectly-appointed patch just outside Bundoran, glamping guests have the ideal base for enjoying the best of both worlds.

When delightful Ballyshannon girl Derval McGovern opened Teapot Lane back in 2010, the whole concept of glamping was an alien one to our cousins across the Irish Sea. But Derval's masterful cultivation of the site has seen her spread the glamping gospel far and wide; glossy magazine features; chic fashion shoots; even a feature on RTE's Nationwide, it's little wonder why Teapot Lane is winning plaudits.

The site's four latticed-wood, Mongolian style yurts lie in separate secluded spots around this quiet Tawley-based site. Three of them sleep up to four adults, while the larger Ladybird sleeps up to six. All are beautifully adorned in a shabby chic style with soft, comfy bedspreads, bunting, scatter cushions, and the obligatory wood-burning stove (it just wouldn't be a yurt without one) and ceiling wheel (toono) to let in the invigorating country air. The ravishing red retro caravan is the perfect romantic retreat for two, with cute Cath Kidstonesque interiors. The undoubted star of the show though is the enchanting treehouse. Raised nine feet above the woodland floor, this canopy cabin is the real deal. It sleeps up to three adults in its über-luxurious interior – the plushness of the beautifully-dressed bed, cushioned window seats, Pot Belly Stove, and kitchenette all offset with the tree itself sprouting through the decking – the height of sylvan splendour.

Teapot Lane is a hit with kids and adults alike. Mum and Dad can swing lazily in the hammocks while enjoying the artisan produce in the gourmet picnic baskets available, as the littl'uns let their imaginations run riot in the 'fairy garden' – think A Midsummer Night's Dream meets The Secret Garden. And when dusk descends, neither young or old need to be offered those marshmallows twice for toasting on the nightly campfires.

Despite your more-than-likely reluctance to leave Teapot Lane once settled in, the wonders of Ireland's west coast await beyond the campsite confines. The site is perfectly poised where Donegal, Leitrim and Sligo converge and lies upon the opening stretch of the much vaunted Wild Atlantic Way. There are five spectacular sandy beaches within easy reach of the site, perfect for long walks, horse trekking, and popular with Ireland's burgeoning surf community, including the expansive dunes of Streedagh Beach, a glorious three kilometres of sand dunes that formed the fictional Carricklea Beach in the recent BBC adaptation of Normal People. There's innumerable lovely harbour towns boasting the kinds of quintessential Irish pubs whose antiquated hoardings exhorting 'Guinness is good for you' are justification enough for a pint or three of the national export. The region is also something of a gastro hotspot, renowned amongst other things for its sumptuous seafood. You can sample the best of it at Ethina's By the Sea – you can't miss its marine mural frontage, facing the harbour at Mullaghmore.

And then there's the aforementioned Benbulbin. The Darty Mountain range to which it belongs is the fabled Ireland of so many myths and legends – the Emerlad Isle's answer to Uluru has been the backdrop to more than its fair share of drama. The six mile Gleniff Horseshoe circular route offers some spectacular sweeping vistas. It's home to Ireland's highest cave said to be the final resting place of Ireland's very own Tristan and Isolde, lovestruck warrior Diarmuid and his runaway princess Gráinne. Were they around today, we're sure these beleagured lovers would have found more than suitable glamping sanctuary at Teapot Lane.

Just the glampers (no tent campers or caravanners). July & August (school holidays), couples and families only. Exclusive hire also for available for up to 30 guests. Hen and birthday parties welcome. Dogs are also welcome.

There are five sandy beaches within an 8 mile radius of the site. Mullaghmore (8 mins drive) is the nearest – it's a charming seaside harbour resort with a wealth of classic pubs. This stretch of coast is also one of Ireland's most popular surf spots. Bundoran's famous surf reef, 'The Peak', boasts the best swells. TurfnSurf (00353 71 984 1091) offer lessons and kit you out with all the gear if you fancy hitting the waves. Or if you'd rather gallop your way along the fron, Island View Riding Stables (00353 71 916 6156) specialise in beach riding. The towering Benbulbin can be scaled from its south face – the views from the top are spectacular. The woodland walk at the foothills is a less strenuous and equally glorious. Literary pilgrims can top off a day on the Yeats trail with a visit to The Yeats Society (00353 71 914 2693) in the which hosts regular events and exhibitons in honour of Sligo's most famous son. Lissadell House and Gardens are well worth a visit, not least for their exhibitons and spectacular Victorian kitchen garden. Be sure to check their calendar for an upcoming concerts. Past performers incude Leonard Cohen and... er... Westlife.

Salad, herbs and a small selection of veggies are available to pick your own during the summer months from the patch. If that seems too much like hard work to you, gourmet picnic baskets full of lovely local produce can be pre ordered. You can also stock up on GM-free supplies at Tattie Oaker Community Organic Farm (0035 38 615 7263) in Ballinduff. Pubwise, Madden's Bridge Bar (00353 71 984 2050) serves decent pub grub, with views to keep an eye on the surf. A pint of the black stuff at nearby Brennan's (00353 71 984 1810), or The Criterion as the local's know it, is a must – a real step back in time. There's a fine selection of restaurants in the surrounding area. For that authentic experience, nothing beats Ethina's By the Sea (00353 71 916 6407), serving up sumptuous seafood from the daily catch at Mullaghmore harbour. The Courthouse (00353 071 984 2391) is a multi-award-winning Sardinian in Kinlough that specialises in refined, yet rustic cuisine using only the finest Irish produce.

Avoid coming to Teapot Lane through Leitrim – Take routes through Sligo or Donegal depending on where you are coming from.

From Bundoran: Take the N15 towards Sligo, drive aprox 8km and on the left you will see a right turn for Mullaghmore, this has a large sign for the Beach Hotel on the turn off – don’t take this turn! Drive a little further past this on the N15 and you will see a crossroads sign. The small crossroad is the L7108 – take this road to the left, drive 1.2km and take the first left turn (this road has a cul de sac sign) take this left and you will find Teapot lane on your left.

From Sligo: Take the N15 towards Donegal drive through all the towns in Sligo that are on the N15 – the last village in Sligo is Cliffony drive 4km past Cliffony the road will regain a hard shoulder and you will see a small crossroads sign on the left and the cross road is numbers L7108 take this road to the right drive 1.2km and take the first left turn (this road has a cul de sac sign) take this left and you will find Teapot lane on your left.