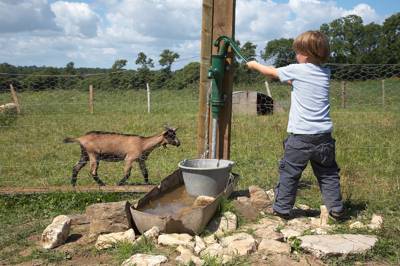 The 12th-century church in the sleepy French village of Louvières towers over the place like a gigantic darning needle. It’s not only one of the tallest and most beautiful churches in the vicinity but seemingly also the pointiest (if that’s a characteristic to be proud of?). It acts as a handy and noticeable way marker as you walk around the surrounding meadows at La Ferme de La Folivraie – get lost and you can trace your way in it’s direction, leading you back to the site from which you started out.

And what a site it is. Nestled down a side road from the central village green, La Ferme de La Folivraie is everything you want in a French glamping site and more. The accommodation – plush yet rustic safari tents – are kitted from roof to rug with country-chic wares, including bronze candelabras, heavy wooden tables and a toasty log burning stove, while the layout is one of comfort and practicality. The kitchen has the kit and caboodle you’d expect of a self-catered cottage, with a cool-box acting as the fridge, and there are two separate bed rooms accompanying the amazing ‘cupboard bed’ that the kids will be clamouring over for it’s cute and cosy feel.

Owners, Jaques and Marguerite-Marie, are a continuation of the farming family that have now been tilling these sandy soils for over 60 years. So it’s unsurprising that when the place was first bought back in the 1950’s it wasn’t exactly in the best shape. Less than 2km from the sea and just moments from famous Omaha Beach, the site of the allies’ D-Day landings, this is one of the most historic areas in all of France and from the Hundred Years War to the Second World War it’s taken it’s fair share of the battering. Today, though, the scars of years gone by are worn as quirky traits in what is now one of the most homely feeling farms you’ll ever come across. Donkeys, goats and cows graze in the fields and sheep peer through the fence, curious of your presence. Just the odd nick in the sandstone buildings or crumbled bricks of an ancient farm shed gesture to the history that has passed the place by.

For those who do want to explore it all, it’s a pleasant half hour walk down to the beach itself and a bit further to the Omaha Beach D Day Monument, a fascinating, if slightly sombre, museum and display. The high cliffs of nearby Vierville are also well worth a visit, with spectacular views of the coastline across to the Pointe de la Percée. Up until the beginning of the 20th century, the locals were still using ropes to descend to the rocky beaches below. Inland, the vast Marais du Bessin National Park is just another feather in this charming location’s cap, ever bolstering your activities options. So much to do, so little time... you’ll just have to stay for the whole summer.

Canvas lodges (sleeping up to 6) each feature a double bed, bunk bed and cupboard bed suitable for 1 adult or 2 children (bedding included). Cots and highchairs are available at request. A cooking stove, cool box, table and chairs, sofa, flushing toilet, cold running water and wood for heating and cooking are all included. There are 2 deck chairs, and packs of candles and oil for the lamps. Showers are a short walk from the lodges. The farm also has an honesty shop where you will find a basic range of products to purchase and plenty of the farm's own goods. A communal chicken coup provides fresh eggs, alongside goats, pigs and sheep.

There are plenty of options here, many of which can be found with little more than a simple walk. Follow the old farm tracks down to the small Veret river. It's slightly crowded on it's edges but you can dabble around and build dams in the more accessible spots. If you fancy yourself as a bit of a water-baby though, it's a half hour walk down to the coast. Head east to see the sweeping front of Omaha Beach, with poignant memorials on its waterfront and, slightly back from the sands, the Musée Mémorial d'Omaha Beach (0033 2 3121 9744), well worth a visit. To the west, the towering cliffs around Vierville are also impressive, with good rock pools underneath for dipping in when the tide is out. Back inland, magnificent Marais du Bessin National Park (0033 2 3371 6190) is a fab spot for cycling – ask Jaques and Marguerite-Marie for suggestions – or head to the nearby city of Bayeux, of historic tapestry fame.

The farm shop sells local produce alongside its own organic goods. On certain nights, there is a traditional wood fired oven that's lit for cooking – grab some of their home-made cheese and try your hand at making pizza. 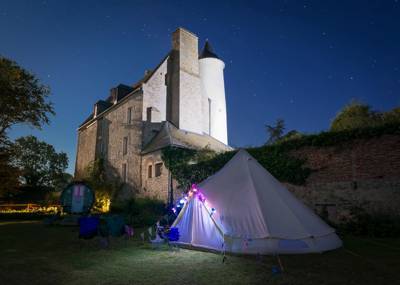