Book with confidence at North Lodge with our Coronavirus Booking Guarantee 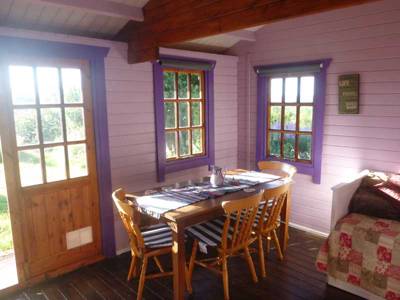 North Lodges, cabin in the old orchard, its own private space. Off the grid cabin experience, a great holiday retreat, after exploring the beautiful North Pembrokeshire area come back for a warm and relaxing night.

The cabin sleeps up to 4.  It has its own woodburner, a double bed and daybed that extends for a double/two singles, great views across the countryside and the Preseli Mountains.

Following on from the success of Preseli Cabin, the damson cabin idea started with the great winds of 2013/14 when one of the only remaining trees in the orchard a damson tree was felled by the wind, why not put a cabin in its place? Since its erection in early February 2014, this ex display rather tired leaky cabin has been lovingly restored and weatherproofed, using local or sustainable products and furniture, including a beautiful vintage bed. Decorated with colours reflecting calm and relaxation, out of the two cabins it has been described by visitors as the more romantic. But it also lends itself to groups with the non campers staying in the cabin whilst their camping friends pitch up in the orchard.

The cabin also has a firepit and its own kitchen for food preparation and cooking undercover and new loo.

Book with complete confidence at North Lodge with the Cool Camping Coronavirus Booking Guarantee. We guarantee the following clear policy for your booking:

Nearby Cenarth has lovely waterfalls and a good selection of pubs/tearooms although it can get busy, plus the National Coracle Centre (01239 710980). Wales’ biggest and best preserved Neolithic dolmenPentre Ifan is a few minutes’ drive away and above it are the Preseli Hills from where the Bluestones of Stonehenge were quarried.

The best option is The Boncath Inn (01239 841241), less than five-minutes’ drive away, a traditional, friendly pub offering decent pub grub and ales. Just down the coast at Newport is the Cnapan Restaurant (01239 820575), one of the best eateries in Pembrokeshire.
Search All Availability at North Lodge

A little piece of Tranquil Retreat

We stayed recently, August, you will be transported to a time gone by experience, truly off grid. From the moment you approach( Damson) through a shrub, bush and plant canopy into a "small glen" of nature, peace, wildlife and best of all completely private ( completely surrounded by trees, shrubs etc) to give a perspective of being in true British wilderness, you are taken to a bygone time of holidays. The Hut, is well appointed, with a double and a Day Bed which converts to a double( if required) a dining table, log burner, adequate storage and a covered porch. Little touches here and there are thoughtful and in keeping. If you truly want a back to basics, escape from the World stay, then this is the place. Toilet for Damson is a "Dunny style " with a camping type toilet. Few spiders but adds to the experience. Kitchen facilities are more than adequate with a sink, well organised recycling and some added extras. (Need to boil kettle for washing up water) Shower area is OK, it's warm, gets you clean but as with the whole experience do not expect "luxury" as this is truly not what this is about. The owners are amazing, happy to help, with a great appreciation of their surroundings and their objective. It is truly OFF GRID, so take your torches, candles(safely), charge banks for your phones( if you need them!) Buy extra logs for the log burner if it gets chilly, playing cards in front of the light of the fire, with just sounds of nature was lovely. Be prepared to forget about, dishwashers, fridges, TV and all that other paraphernalia and Embrace the experience. You will not regret it.

Hi Gary, Thank you for such a thoughtful great review, hope to see you again sometime
★★★★★

Stayed at North Lodge camping this weekend and we were amazed by the camp - more importantly the dog was having the best holiday :) Situated in a fantastic area - with loads of things to do locally. But the best for us was the campsite itself , we loved the eco approach to the campsite. We will definitely be back at some point in the near future :D
★★★★★

Lovely small field for our exclusive use, awash with wild flowers and wildlife. The composting toilet was clean and environmentally friendly, down a long path away from the camping areas. The owners were friendly. The area beautiful. The shower was the only thing that let it down. I would definitely go back for another weekend away.

Hi Nicola It was great to meet all of you, thanks so much for the feedback, always happy to see visitors enjoying our little site.  Jane and Martin
★★★★★

The perfect campsite if you like a basic, quiet camping experience. We loved staying there. All the amenities required are provided. We particularly liked the wild, natural, rustic nature of North Lodge. Martin and Jane never over-fill the site with campers so you get a fantastic feeling of space and privacy. If you are a wild camping kind of person you're going to love North Lodge!
★★★★★

With the peaceful surroundings and lovely people we had an absolutely lovely stay.the campfire was great and had all the facilities we needed.
See all reviews at North Lodge

The site is on the south side of the B4332 mid-way between Eglwyswrw and Boncath.  The postcode is SA37 0JE.  On booking we always send directions as SATNAV is not always reliable due to our large postcode area.   For practical ease most of our visitors come by car, we are not far from most places and you can enjoy a cycling holiday around the area.
Trains are now more frequent on the South West Wales line to Fishguard, you can reach our site from Clunderwen Station on this line, or Fishguard station which is slightly further.  The bus from Clunderwen is the 430 from Narberth to Cardigan.  The bus from Fishguard to Cardigan is the T5, you alight at Eglwyswrw.
For cycling and walking around the area go to the following: