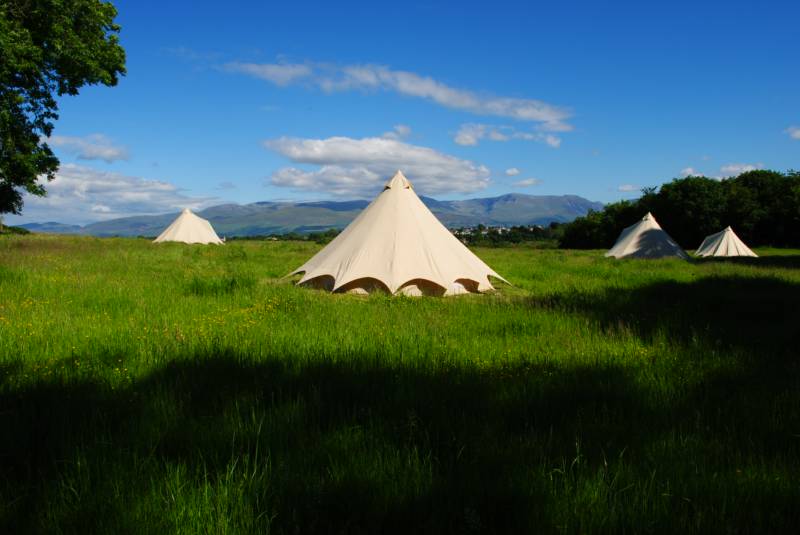 Holyhead, Anglesey, North Wales
Carreglwyd Estate, Llanfaethlu, Holyhead, Anglesey LL65 4NY
Glamping in the grounds of a 17th-century Georgian mansion, with good food and activities and a beach within reach

A cosy campsite on an Anglesey smallholding for adult-only campers, glampers and campervans.

Sometimes it’s best to keep things simple and to put it simply: if you want to camp on Anglesey, we’d recommend Mulberry’s Farm. It’s not for everyone – in fact it’s just for adults – but if you’re a grown-up who likes proper camping with campfires and starry-night skies, but with great facilities and individual shower cabins, you'll find this cosy campsite on a smallholding is simply wonderful.

There are just six off grid grass pitches and five all-weather ones for people with campervans and motorhomes with EHU. There’s glamping too with a lovely bell tent which is kitted out for couples in a separate paddock. Cars are kept away from the camping and glamping area but it’s only a short walk to whichever pitch you’ve been allocated. Gill or Derick, on whose smallholding this campsite is found, will down spades and come to point out which is yours.

The couple have been tending this land for 20 years but have only in the last four years decided to share it with campers, taking care of all the hard work themselves. They wanted to give people a little taste of what drew them to Anglesey in the first place; the space, the beaches and a chance to get back to old style camping. You certainly get that here but it’s comfortable too. Bell tents and all-weather pitches have power and, while the grass ones are off grid, there’s a shared undercover kitchen for that morning coffee if you don’t fancy getting the campfire started again. Perhaps best of all, Gill and Derick will bring bacon butties to your pitch if you order the night before from their 5 star hygiene rated commercial kitchen. You can see the other fruits of their labour with a walk around the smallholding and, in season, taste them as they sell their produce on site.

For a campsite that’s on the far side of an island that’s only lightly tethered to the rest of Wales, Mulberry’s Farm is surprisingly easy to get to. It’s not far (but thankfully out of earshot) of the A55 trunk road that connects nearby Holyhead with the mainland. That means, you can zip from here to most of Anglesey in under half an hour and to Snowdonia National Park, over the bridge, in little more. It also means that campers from across the border can reach Mulberry's Farm in 90 minutes – perfect for a weekend getaway.

It’s worth mentioning you may even be able to enjoy a flyby from nearby RAF Valley. This is where jet pilots, including the Red Arrows train. It’s also where The Duke of Cambridge, Prince William, worked as a search and rescue pilot for three years. His view on Anglesey, according to interviews at the time, was pretty clear; “I have never in my life known somewhere as beautiful and as welcoming as Anglesey.” After a night or two at Mulberry's Farm it's hard not to agree.

There are three self-contained shower cabins with a shower, sink and toilet in each. There’s also a communal kitchen area with fridge, freezer, microwave, kettle and charging points plus a hot-water washing up area. Campfires are allowed, firepits are provided at each pitch and log are for sale on site. Hardstanding pitches have electric hook up and there’s grey water waste disposal too. Bell tents are equipped with a king-sized bed, including bed linen, in each. There’s also 10 amp electric sockets, bedside lights, table and chairs for inside and out, and electric cool box, kettle, mugs, tea and coffee. Outside you have a picnic bench alongside your firepit and barbecue stand. There’s free WiFi throughout the site.

All of Anglesey is yours to explore – and if you fancy walking round it, there’s always the Anglesey Coastal Path. The closest beaches are Trearddur Bay and Rhosneigr, both around a 15-minute drive from site. The Valley Wetlands RSPB Reserve is just three miles away. It’s free to explore and home to various wildfowl all year round. Nature lovers will also enjoy the Breakwater Country Park, nine miles away, where there are good footpaths and the South Stacks RSPB reserve (01407 762100). Many of the top-tourist attractions are in the south-west, an easy 20-minute drive on the A55. There’s Plas Newydd House and Garden (01248 714795) 16 miles away, Anglesey Sea Zoo (01248 430411), about 18 miles from site, and Beaumaris Castle (01248 810361), 21 miles from site. There’s also adrenaline-fuelled adventure with Ribride boat tours (0333 1234 303) which launch from Menai Bridge and Tacla Taid – the Anglesey Transport Museum (01248 440344) where there are hundreds of vintage vehicles on display. In the other direction, on Anglesey’s north coast, is Copper Kingdom (01407 830298), a former copper mine, now a heritage attraction. Snowdonia National Park is less than 30 miles from Mulberrys Farm.

Use the A55 North Wales Expressway to cross from mainland Wales on to Anglesey then continue north towards Holyhead until junction four, signposted for the A5, Caergeililog. At the roundabout, just after the slip road, take the first exit on to Minffordd Road. Take the first right (after about half a mile) and then right again to arrive at Mulberry’s Farm.

The closest railway station to Mulberry’s Farm is at Holyhead which makes getting to Anglesey and close to Mulberry’s Farm surprisingly easy. From the station you could take a taxi for the last seven miles but Gill advises that it’s best to have a car to explore from their rural location. Car hire is available in Holyhead as well as campervan hire in Wales.

Our second year of staying at Mulberry's Farm on Anglesey, in our Campervan. The owners have put a lot of time and careful thought into what type of site they wish it to be, and therefore what type of campers they wish to attract. They've invested time and energy into improving the camping experience for all. Absolutely stunning pitches for tents who need EHU, based on bark chips, each in its own separate 'garden' with path and picnic table and lots of privacy. The hard standing for campervans etc have also been enhanced with willow 'hedges' and flower beds, they are excellent and this is what we booked. Then there's a field adjacent with super-large 'wild camping' pitches, for tents who do not require electric. The site is still small and for adults only. There's a cute info hut, this year offering for sale local ice cream, lavender bags and home made Bara Brith plus local info. It is a quiet scenic site with lovely sunsets and occasional excitement provided by jets flying overhead (not a noise issue, we love to see them) from RAF Valley. Lots of wildlife and flora and fauna. Highly recommended, we will be back. Big thanks to the delightful owners, they really make it a great place to stay.
Show more