A small, off-grid campsite with alpacas in the historically rich southern Scottish borders

Back in 2016, Lynne Jobes went to a glamping show with the intention to buy some yurts. She wanted to set up a campsite on her smallholding in the Scottish southern borders but, to everyone’s surprise, she returned with alpacas. Since then, she and her team have been running Beirhope Alpaca Trekking, a lovely little business offering hikes into the surrounding landscape of the Cheviot Hills and the Kale Valley. Now, several years later, Beirhope has become a campsite and it’s finally possible to pitch up right next to the woolly Peruvians.

Set just slightly north of the Anglo-Scottish border and overlooked by the old Roman hill fort of Thowliestane Hill, the campsite is small but has a variety of options. Campers can pitch a tent and have a campfire in the field adjacent to the alpaca paddock, or if they would prefer a bit more in the way of ‘comfy camping’, they can pay a little extra and hire the furnished Beirhope Bell, complete with fairy lights and a complimentary bag of carrots to feed the alpacas with. Furthermore, to keep from scaring the alpacas, dogs are not allowed in the main part of the site but are welcome to stay with their owners on a separate pitch in a secluded oak and beech woodland closer to the barn. The barn houses the main reception area and is also where the facilities can be found. There’s a compost loo, hot water bucket shower, and honesty shop for essentials.

It’s not all about the alpacas, however. Beirhope offers the chance for guests to share in the owner’s passion for the landscape in which they find themselves. Indeed, a short walk along Dere Street, possibly Scotland’s oldest road and which runs past the campsite, leads to Thowliestane with its panoramic views taking in the Eildons and Peniel Heugh to the north and The Cheviot, The Schill and Hownam Law to the East. It’s not the Andes but it is wild and breathtaking in equal measure. And whether you have Lynne’s alpaca crew in tow or not, this really is a walker’s paradise. The classic Pennine Way route has its northern end in the tiny village of Kirk Yetholm a short distance away and the east-west trail, St Cuthbert’s Way, passes through the same place, bridging the English Scottish border.

Going slightly further afield will lead to the market town of Kelso, home of the magnificent Floors Castle, which lies on the confluence of the rivers Tweed and Teviot or the historic county town of Jedburgh, with its 12th-century abbey, both within a short driving distance of Beirhope.

There are two camping pitches and one furnished bell tent (The Beirhope Bell) for hire in a separate field next to the alpaca paddock and one dog-friendly pitch in secluded woodland away from the alpacas. Each pitch has its own free-standing fire pit for campfires and logs and charcoal are for sale on the site. At the barn near the entrance are the facilities: one composting loo, a gents urinal, and a fully enclosed bucket shower room. There is a washing-up sink and washing-up bowls are provided to take back to the pitches if you wish; cleaning products are supplied. Also on the site is an honesty shop selling hot and cold drinks, various confectionery items, and some camping staples. When available, Lynne will happily sell seasonal veg from her garden. As well as the camping, of course, guests can book a walk into the surrounding scenery with the alpacas or just buy a bag of carrots to feed them with.

The southern Scottish borders are steeped in a rich history, from ancient Roman roads and hill forts in the Cheviots to the abbeys, castles, and country estates around Kelso and Jedburgh. Situated on the north-western edge of Kelso is Floors Castle and Gardens (01573 223333). Built for the first Duke of Roxburghe in 1721 it’s more a country house than a castle and holds the title of being the largest inhabited house in Scotland. Take a tour of the castle itself or wander the impressive gardens and woodland grounds. Stunning Jedburgh Abbey (01835 863925) is just eight miles east of the campsite and sits right in the heart of Jedburgh town. An audio tour is available for this iconic piece of architecture built around 1138 for Augustinian canons and there is a cafe next door. Cessford Castle, a large 15th-century ruin about seven miles from Beirhope, is well worth a visit, and Corbet Tower (01835 822277), a Victorian house and gardens with medieval peel tower, lies just three miles away to the east, close to the picturesque village of Morebattle.

There is a small shop at Beirhope Alpacas selling basic camping staples such as pasta, beans, long-life milk, etc. and there’s a hot drinks machine as well as some confectionery items. Lynne will have seasonal veg to sell from her garden, too, when it’s available. To eat out, try the Border Hotel (01573 420237) in Town Yetholm, nine miles north of the campsite, or Templehall Hotel (01573 440249) five miles north in Morebattle and home of the famous Temple Burger. These two hotels lie on the Pennine Way and St Cuthbert’s Way long-distance national trails respectively and are thus very popular with ramblers. Valley Meats (01573 440219) is the local butcher in Morebattle and comes highly recommended by campsite owner Lynne. In Kelso, 25 minutes away by car, there is a good selection of restaurants, cafes, and pubs. The Cobbles (01573 223548) is a modern gastropub with fine dining and locally brewed ale. If you go there to eat, be sure to pop next door afterward for a dessert at Becattelli Artisan Gelato (07866450426). For a good selection of vegan and vegetarian options try Cafe U (01573 225177) who also do custom coffees and sandwiches made with specialty bread.

Nestled in the heart of the Cheviot Hills, Beirhope boasts some of Scotlands most spectacular views. With alpaca walking activities, roman roads, hill forts and breathtaking night skies, this rural dog-friendly site is one of a kind.  Read More

Two camping pitches and one furnished bell tent in the field next to the alpaca paddock. And one camping pitch that allows dogs in a secluded woodland. 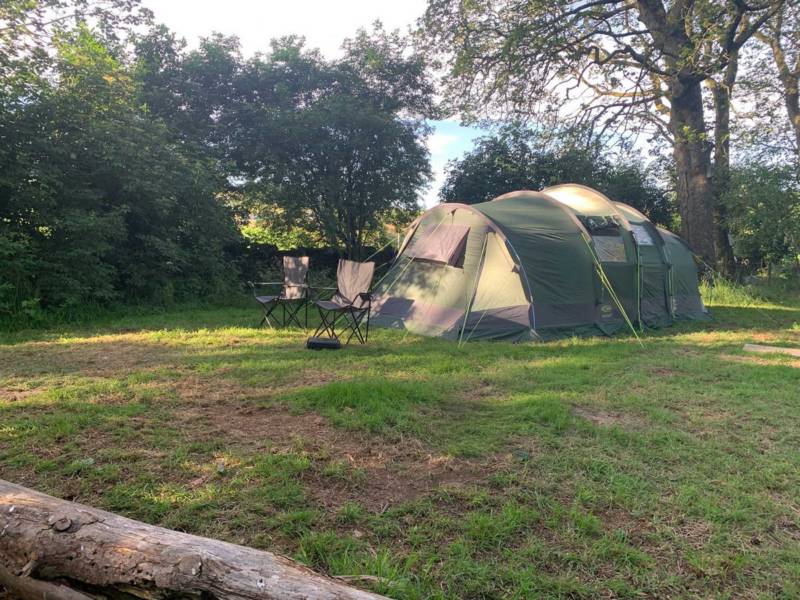 i
A truly unique camping pitch neighbouring our fun friendly alpacas! Sleeps up to 4 people. i
A truly unique camping pitch neighbouring our fun friendly alpacas. Sleeps up to 2 people. i
A beautifully furnished bell tent that sleeps up to 4 people. The perfect way to reconnect with nature and experience sleeping under the stars without sacrificing all your home comforts.

Grass pitch Sleeps 4
A beautifully furnished bell tent that sleeps up to 4 people. The perfect way to reconnect with nature and experience sleeping under the stars without sacrificing all your home comforts.
Select Dates or Read More 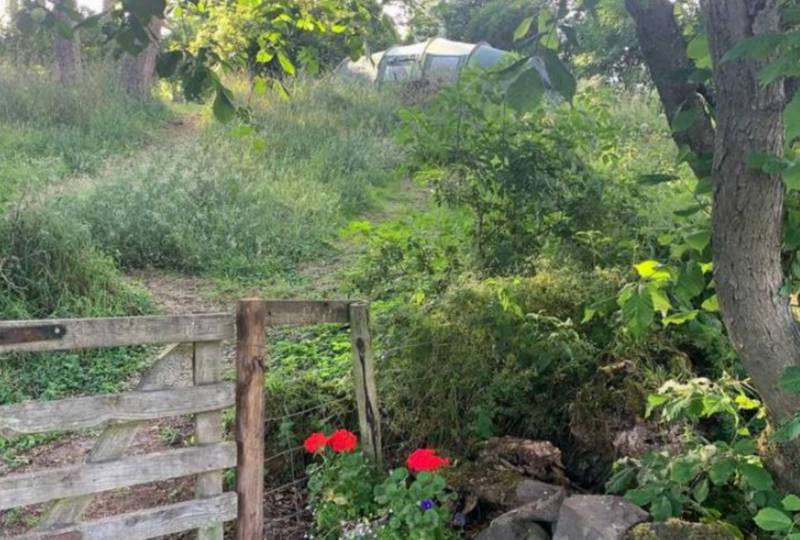 i
A secluded woodland dog-friendly pitch, suitable for up to 6 people. Relax to the trickling sounds of the nearby stream and enjoy the wonder that is Beirhope.

Grass pitch Sleeps 6
A secluded woodland dog-friendly pitch, suitable for up to 6 people. Relax to the trickling sounds of the nearby stream and enjoy the wonder that is Beirhope.
Select Dates or Read More
Show more
Check Availability

If you’re coming from the south, travel to the Camptown exit of the A68 and turn off heading for Oxnam. Ignore early Hownam signs and enter Oxnam, passing the Village Hall on the right. Take the next right signposted Hownam over a narrow stone bridge. The roads are narrow, sometimes single-width with passing places. Continue on the road, pass the Kirk and carry on for approximately two miles. Take the right turn signposted Hownam. Beirhope Alpacas is three and a half miles along this road on the right. Follow the signs into Beirhope Alpacas.

If you’re coming from the north, travel to Jedburgh and continue to the abbey/swimming pool. Turn left at the swimming pool onto Oxnam Road and then continue uphill out of Jedburgh where the roads become country lanes. Approximately four miles out of Jedburgh at the farmhouse Millheugh turn left following the signs for Hownam. Then one mile up the hill at the T junction turn left at the signpost for Hownam. After another 500 yards follow the next sign towards Hownam. Beirhope is three and a half miles along this road on the right. Follow the signs into Beirhope Alpacas.

Coming from the south, the closest train station to Beirhope Alpacas is in Berwick-upon-Tweed. From there the 67 bus service goes to Kelso every four hours and takes about 50 minutes. Then another bus to Morebattle on the 81 line will take about 30 minutes. A ten-minute taxi journey from Morebattle will get you to the campsite.

From the north, the closest train station is in Tweedbank. There is an hourly bus service (67) to Kelso that will take about 45 minutes.