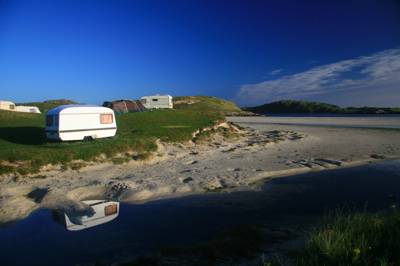 Stunning setting at the very end of the world

If you’ve never felt like you’ve reached the end of the earth then come to Traigh na Beirigh (don’t try to pronounce it) near Cnip (pronounced ‘neep’). This tiny crofting community on the western coast of Lewis in the Outer Hebrides seems like the last place on earth. In reality, if you’d kept on going west you’d eventually end up on the Labrador Coast of Newfoundland (where there’s probably someone looking east feeling the same as you) but you’d never guess it standing on the dunes of Traigh na Beirigh gazing out over the aqua-blue water. It feels like the end of everywhere you’ve ever been. And that, of course, is the attraction. Even the cluster of cottages that comprise Cnip is over the hill in the neighbouring bay, so the only thing to disturb the peace is that occasional bang of a grousing gun in the hills behind and the sound of the waves on the beach.

Traigh na Beirigh is the name of the bay on whose grassy dunes the campsite sits and the site is owned by the Cnip villagers through a community trust. the village itself is 40 miles from Lewis’s only real town, Stornoway, over miles and miles of captivating emptiness in which rocks poke up through the threadbare soil like elbows through an old tweed jacket. Even in the summer, the weather on Lewis can be cold and harsh, and the landscape elemental and bleak. And so the bay, when it comes, is something of a surprise. The road from Cnip climbs the shoulder of the hill and as you crest the brow the brilliant blue of the bay is suddenly there before you with its scimitar of white sand fringed with grass.

Compared with some of Scotland’s other bays, though, Traigh na Beirigh is modest. If you really want to stretch your legs, then head for Uig Sands, four miles south of Cnip. It’s an extravagant cove where the low tide retreats for miles out to sea and leaves a rippled tract of golden sand. It was here that a cow accidentally found the Lewis Chessmen in 1831. Made by the Vikings from walrus ivory, these 12th-century chess pieces were discovered among the sands and are now in the National Museum in Edinburgh.

Old though the ancient chessmen are, even they are new kids on the block in comparison with Lewis’ main attraction, the Standing Stones at Calanais (Callanish). These swirling spires of Lewisian gneiss, the oldest rock in Britain, have the gnarled look of petrified oak trunks. As well they might because the stones, set in the shape of a Celtic cross, are older than Stonehenge and just as baffling. The runic allure of them attracts its fair share of hiking hippies, the rocky equivalent of tree-huggers, who come to commune with the stones, much to the frustration of photographers in search of that cherished shot (and much to the amusement of the incurious sheep). Neither can ruin the simple grandeur of Calanais, though, particularly as dusk begins to fall. If you can get a shot of the stones at sunset, it will definitely be one to keep.

And back at Cnip, sunrise over the waters of the bay is another finger-clicking moment to cherish long after you’ve gone home to tell your friends all about your stay at the end of the earth.

One recently renovated, small but serviceable, toilet block with male and female facilities (1 cubicle and 2 new £1-coin-operated showers each) and a dishwashing station. There is a recycling facility behind the toilet block.

There are more churches than there are pubs on Lewis. The Uig Community Shop 4 miles south of Cnip at Timsgarry is licensed and sells a decent range of beers, wines and spirits.

From Stornoway follow the A859 to Leurbost and turn right to Achmor. Then take the B1011 to Miabhig. Take a right and follow the road through Cliobh to Cnip. Stop at house number 15 at the bottom of the hill to pay.

There is a bus service (no. W4) from Stornoway to Uig with a separate service for the loop road through Cnip.

The shower/toilet block now has a full accessible disabled shower and toilet, separate male and female toilet/shower rooms and the main toilet/shower facilities with 2 showers in each. We stayed at the end of April and everything was in good condition and being looked after. They were adding hard standing by the toilet block for up to 6 units which will have EHU. Finn said that they were going to charge £4 per night for the use the the EHU and that they should be operational by the first weekend in May 2018 all being well. The only downside was that the waste water drain was raised so you had to lift your waste water tank to empty it. Prices are unchanged for 2018.
★★★★★

Not what it used to be

We stayed on this site in 2015 and loved it, so we looked forward to a return visit this September (2017). What a disappointment! It looked more like a travellers' site with untidy caravans everywhere, no pitch markers and a huge lake/puddle around the toilet block. There was nowhere to park our motorhome so we had to move on. Very disappointing!
★★★★★

We've just spent four wonderful days at Cnip, what a fantastic little site, steeped in history and lots of historical sites, nice people, wonderful beach and scenery and good amenities that are cleaned regularly and in good order, the site is dog friendly (our two German Shepherds ran themselves ragged on the beach), if your thinking of going off peak just look for an empty pitch and Sandy who looks after the place will see you about fees, if it's busy time his bungalow is on the right just before the turn off for the site and has a wooden disabled access ramp up to the side door (not sure of number), just ask for Sandy, he's a very helpful guy and full of local info.

Have fun and enjoy the area,

We spent a fantastic 2 nights at Cnip at the start of a freecamping trip at Lewis and Harris, though we visited many parts of the islands, we would find it difficult to beat Cnip. Really lovely to walk to be had to the east along the beach, climbing the mountain, tremendous views over this rough landscape....highly recommended.

Recently spent a night here, big big area, with beach ahead of you. A very big beach which homes an array of birds, ducks and seals! The owner is lovely and always stops for a chat! Not to many midge about here either which is a plus! Very good price and decent facilities! :)

The site is totally out of the way and is a long drive!!! But i'd say its defintely worth it - but maybe for more than just one night!! :)

Went to this campsite last year, we had an amazing time. The toilet block was immaculate and for the price we payed was so much more than should be expected, I think we payed £6 a night for two people! The campsite is in such an amazing spot the beach is just perfect spent many an evening strolling down the majestic sands at dusk listening to the waves. The campsite can be very windy so be prepared! I had a flat tyre when we arrived, one of the other campers was more than happy to help (I didn’t have a clue!). The owners come around in the evenings to collect the money, an elderly lady who is difficult to understand however is perfectly charming and from her you can gain a sense of community spirit and local pride. We were lucky enough to see the return of the Lewis Chessmen which were on display at the time we went, Uig community hall is a great place to get a sense of culture and history of the surrounding areas and also is a beautiful walk from the campsite (quite a way) the food is great there after a long walk. Saw lots of wildlife on the island although not as much as on Mull. You can go across to St Kilda from Lewis which would have been amazing had it not cost almost £200 each! will have to save that trip for when Im rich! The campsite is fairly quiet, the caravans were all empty when we were there, and although usually I despise the sight of caravans, the way they were anchored down using all sorts of ingenious methods made me feel more endeared to them, as if they were hanging on to the edge of the world! 10/10 for this campsite so many memories from Lewis I will never forget......such a tranquil place
★★★★★

See Campsites in Isle Of Lewis