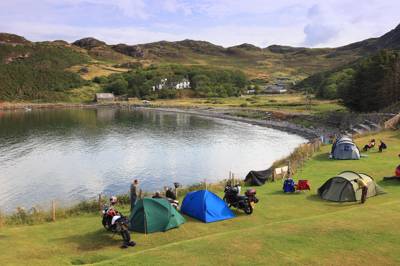 Robert Burns, Scotland’s great mythologiser of the mundane and the simple, wrote odes to such humdrum things as mice, lice and haggis. But he never eulogised the Scottish midge, and with good reason. Midges are neither soft and furry nor very appetising. Besides, ‘wee sleekit cow’rin’tim’rous chironomidae’ doesn’t scan very well.

Whereas many of Scotland’s coastal campsites are too windy for midges, the sheltered bay at Scourie does, unfortunately, provide ideal flying conditions for the little blighters. However, that is no reason not to come and enjoy one of Sutherland’s most tranquil sites. This region is one of the most sparsely populated in Europe and the scattered dwellings of the area’s few human habitations seem to cling to the coast for safety.

Scourie is a tiny hamlet clustered around an inlet on the extreme north-west coast, 40 miles from Ullapool. The landscape here may be stark and sparse but the campsite is a little oasis of green. At first glance, you’d be forgiven for mistaking the green terraces for a nine-hole pitch-and-putt course, so immaculate is the grass. Caravans and motorhomes are confined to the areas around the amenities block, so tents have the run of the terraced pitches that extend down to the shore.

Scourie is an ideal stopping-off point between Ullapool and the far north coast around Durness, 25 miles from Scourie. From Durness, a coastal village that seems like something blown north from Cornwall by doomsday winds, a tiny boat takes you across the Kyle of Durness to rendezvous with a minibus that plies the only stretch of road in Britain not connected to any other road. It runs the 11 miles through an area called the Parph out to Cape Wrath, the most north-easterly point of the mainland and the site of a Stevenson lighthouse (worth a nose around). It’s a favourite haunt of kite-surfers, clinging to their kites as the winds try to whisk them off to Spitzbergen.

For the intrepid there is a chillingly remote coastal walk from the crumbly chocolate cliffs of Cape Wrath back to the road from Kinlochbervie. The walk takes in the fantastic beach at Sandwood Bay and is so remote that it would make even Ray Mears crave extra company. The landscape here is not so much mountainous as pockmarked with massive towers of stone rising out of moorland.

Heading south from Scourie towards Ullapool is the impressive Loch Assynt with the forlorn ruin of Ardvreck Castle sitting exposed to the whipping winds. In 1650, the Marquis of Montrose, who had continued to fight for Charles I, even after the king’s execution in 1649, was led from here, trussed and bound to a horse, to Edinburgh for execution. He was placed on his horse backwards and would have had a magnificent view of the receding castle as he was led away. Forty years later, the castle was ruined after a siege and was left as it stands today, an empty but imposing shell.

After the sparseness of Sutherland, Ullapool feels like a metropolis. It’s a small but bustling town and the main ferry route to the Outer Hebrides. Fresh fish is landed by a small fleet of brightly coloured trawlers, so it’s no surprise that Ullapool boasts one of the best chippies in Britain – known only as The Chippy. A name whose simplicity Robert Burns would no doubt have admired.

Measuring about 1 x 1½ miles, Handa Island is a Site of Special Scientific Interest and is looked after as a nature reserve by the Scottish Wildlife Trust. Up until the mid 19th century, Handa around 60 residents. The islanders worked the crofts and fished, while abundant bird life provided an additional resource – eggs were eaten, houses were lit by burning fulmar oil and bird feathers were traded for supplies. The potato famine of 1848 eventually led all the residents to emigrate, but the birds, of course, stayed on. Today there is some 150 species on the island, including over 100,000 resident guillemots. Take a boat out from Tarbet Pier (07780 967800) and watch the puffins, fulmers and shags, among others.

The Anchorage pub onsite has a good atmosphere and serves up cracking food, while The Scourie Hotel (01971 502396), 2 minutes’ walk away, serves real ale (with a changing selection of guest ales) and decent pub grub but in a rather fatigued setting. There’s a small supermarket in Scourie.

From Ullapool follow the A834 north to Ledmore Junction and turn left on to the A837. Along the shores of Loch Assynt, turn right up the hill on to the A894 and it’s another 17 miles to go before you hit Scourie.

Bus nos. N67 and S67 run north from Inverness via Ullapool and up the A838 to Scourie.

We stayed at Scourie for 3 nights July 2020. Amazing views and Sandy bay. On a sunny day, the water is like the Caribbean (although a bit colder!) good site for walkers, very quiet area. Due to covid, all facilities were closed however hook up, water and chemical disposal was available. Cleaning and hygiene standards were great. The manager / warden has the patience of a saint and deserves a bonus dealing with some of the guests :)
Show more 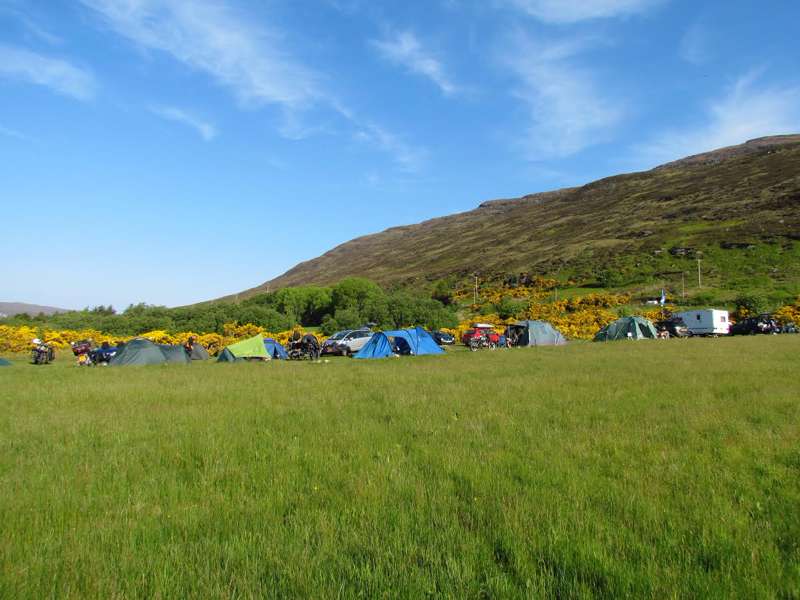