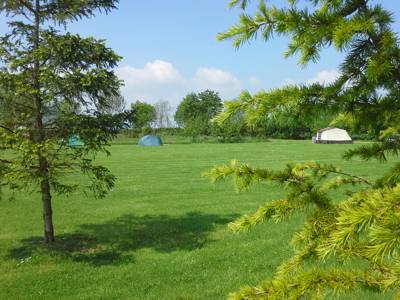 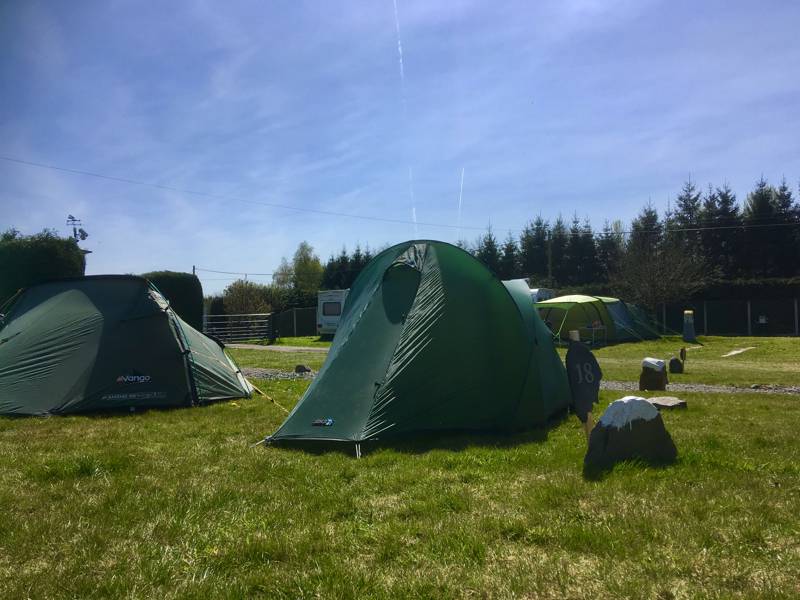 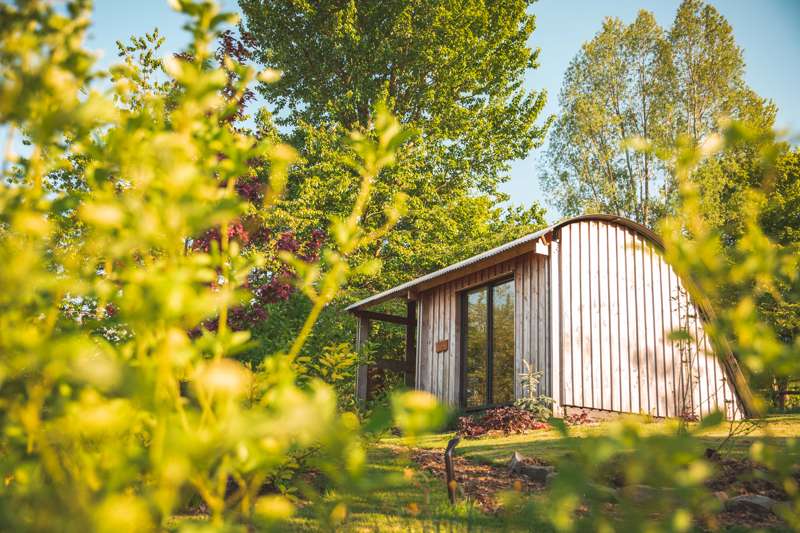 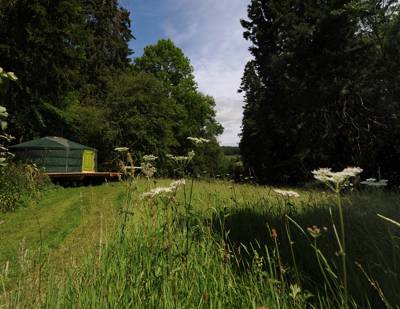 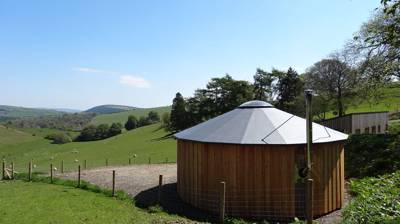 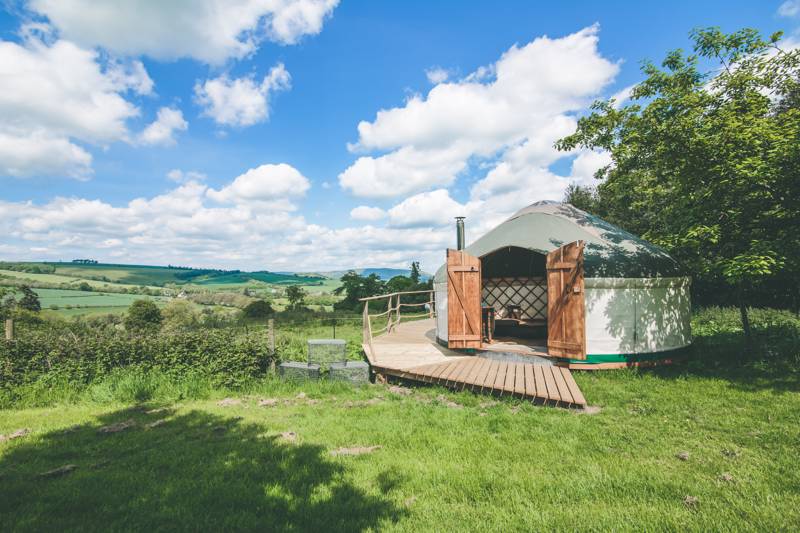 A lovely, small site, far from city life, and with hearty home cooking on tap

You might find it hard to place Shropshire on a map of the UK. Not many people live in West Midland’s little-known county on the border of England and Wales – Shropshire boasts one of the lowest populations per square mile in England – and the rest of us, the tourists, are largely unaware of its colourful past. More than 20 hill forts tell of the county’s battles during the Iron Age (600BC); then there are over 30 castles dotted alongside numerous abbeys, lakes and canals, which, if walls could talk, would regale us with many a tale of feuding battles.

Bishops Castle is a small medieval market town in the Shropshire Hills. A local population of artists, musicians and craftsmen adds a slight bohemian edge to the tiny high street. Several arty shops offer attentive service and will encourage your custom, before waving you off to one of the local pubs to toast your purchases with a pint of own-brewed ale.

As you pootle down the mile-long lane that leads towards Middle Woodbatch Farm, you’ll find the countryside comfort of being sandwiched by leafy hedgerows extremely calming. Steven Austin grew up on this working farm, which has been in his family since 1936. Along with his partner Mary, he now raises cows, sheep and hens and in 2006 the couple opened their first camping field, where they greet arrivals with the warmest of welcomes.

The Austins operate a policy of admitting only 10 tents or camper vans at a time. You could even get the field to yourself in low season, where you’ll see the Shropshire Hills roll out before you like a sea of green grass, as sheep graze like buoys bobbing in the breeze. Children will like the farm animals, which include a pet pig and a magnificent dapple-grey mare called Molly. Then, there’s all the sheep, which Steven might well need help herding.

The family is busy all year round. Lambing on the farm – a hit with young and old – takes places in April. Whilst in June, a burgeoning international walking festival attracts regular and repeat custom, so book well ahead. Other local activities include a Michaelmas Fair, Real Ale and Food Festival and a Tandem Triathlon; there always seems to be something going on.

If you’re not a keen campfire cook, or fancy a treat after a long day’s hike, you can prebook a two-course dinner sourced from regionally produced or organic products, either to eat in the farmhouse kitchen or to take back to your tent. Mary also knocks up full English breakfasts for a fiver. If you’re on a budget, though, just buy some farm eggs and rustle up something yourself in the campers’ own purpose-built kitchenette.

For an ultimate escape within easy reach of cities such as Manchester and Birmingham, South Shropshire is low in human traffic and high in spiritually enriching nature. It’s an enviable paradise for locals and an ideal camping climate for the rest of us.

Willo Game (01588 650539) are wild game wholesale dealers based at Bishop’s Gate, the heart of pheasant countryside. They sell seasonal produce such as venison, partridge, rabbits and award-winning boar and apricot sausages all over the UK, including three of the village’s pubs (Castle Gate, The Boars Head and the Three Tuns Inn). At the end of the winding road is the Six Bells (01588 630144), a former coaching inn dating back to 1670, which serves own-brewed ales. Take a torch if you’re walking, or the hosts may give you a lift. It doesn’t serve food on Sunday or Monday evenings.

It’s off the A488, accessed from the A49/A489, 22 miles south of Shrewsbury, 18 miles north east of Ludlow. Head to the bottom of town along Station Street, turning right at the Six Bells and then first left. The farm is signposted from there. The Secret Hills shuttle bus runs from April to October (01588 673888).

We've camped for all over the UK and Middle Woodbatch is the only place we keep going back to. Two reasons - 1. Steve and Mary are great and have the sense not to crowd the place out and 2. there really is nothing like sitting back with a glass of wine once the kids are in bed and taking in the view of the rolling fields around Kerry Ridgeway and towards the Long Mynd. The sloping field isn't a problem but bottom of the field is best. You go home glad to give your calf muscles a rest but sad to have left such beautiful spot.

Just had a lovely - if extremely cold - weekend with Steve and Mary and the sheep at Middle Woodbatch Farm. The farm is right at the end of a leafy lane which winds through the Shropshire hills - it feels very remote and is extremely peaceful - except for the animals! Our three boys loved the large open camping field which we had to ourselves - not surprising given that it was -3 degrees one night. Camp fire was a neccesary perk. We got to round up sheep and help with lambing which fullfilled a lifetime’s ambition. There is a newly level area of the camping field at the top which should help campers avoid the slope when it is available in a few weeks. Shower room / loos were very clean - but there are only two so when the camp site is full, even with only 10 tents, there may be an uncomfortable wait if you are desperate. £1 charge for shower seemed a bit steep, given that they weren’t the most powerful in the world and the rooms are very chilly. Camp kitchen was nice touch - there is a kettle, fridge and microwave for campers use, plus 1 sink for washing up. There are pleasant walks to be had direct from the camp site, so no need to get into the car for a few days which was good too. All in all, a lovely camping retreat on a friendly working farm.
★★★★☆

Nice campsite with lovely views and hospitable hosts and with great walking straight from the site. The nearest pub is a good half hour’s walk away and the lane’s a bit muddy sometimes so worth wearing wellies or gaiters to get there but well worth the effort with good beer, a lovely welcome and very nice food. The walk back is quiet and dark so very pleasant on a fair evening. Anything other than basic supplies are best got whilst out for the day as the local village is a bit limited. The main downside with the site is the slope of the field which gets a bit wearing if you’re there for more than a day or two - worth getting a pitch at the bottom of the site if you can - your hosts will happily point out the best available pitches so worth asking before deciding.
★★★★☆

Lovely campsite at the end of a winding road. Only 10 tents allowed on the pitch which is great because it leaves lots of room for children to play. The field is very sloping though, which is why there is probably only 10 tents allowed. Our children, 3yrs and 1yrs, had a lovely time running around and visiting the calves, sheep, pigs and horses. Shower rooms were pretty good although you do have to pay a £1 to use them. Kitchen is brilliant as it has a kettle, fridge, small freezer with freezer packs to use and washing up facilities. Only downside of the campsite was that in the Cool Camping book it says that you can request a cooked breakfast but apparently this hasn’t been the case for years. The owners are very friendly though and it was great to be able to have a fire in the evening.
★★★★★

Middle Woodbatch Farm is a Fantastic place for a family holiday. We camped there for the Easter weekend and had a great time. Toilet facilities were warm and clean. Stunning views of the country side. Plenty of space for the kids to run around. Camp fires under the stars, seeing a lamb being born have all given us some very special memories. Loved it.
★★★★★

This is a superb camp site... We found this in the cool camping guide 2 years ago and have been back many times. Steve and Mary are the freindliest hosts, infact over the time we’ve spent there we become good freinds. We look forward to going back to see them, year on year. The facilities are amazingly clean and ideal for families. Two Big shower rooms, with warm flooring, benches and fresh flowers. The site only allows 10 pitches, so the bathrooms are never too busy. We have taken our 2 children here since babes in arms. Our 3 year old loves it here and cries and screams if we have to leave the farm and gets very upset when we have to go home. Its a working farm, so you get to see real farm life. Children love the chickens, Molly the horse, Piggy, lambs, sheep, cows and calves. Infact spring time is the best time to go, lots of lambing to see and little white lambys bouncing around the feilds. Theres no play area, no swings..but you dont need it. Plenty of space for the children to kick a ball, play games. Go for walks up the lane, bat spotting at dusk...fantastic place for children. Bishops castle is just over a mile back down the lane. There you will find some of the best pubs. The Three Tuns is a micro brewery, definately taste the XXX beer. Food here is also very good. The castle hotel has a lovely beer garden around the back, ideal if you have little ones. The 6 bells is a lovely local pub that serves delicious food also and fab beer. There are plenty of shops here to buy your supplies, coop, deli, butchers...you’ll not really need to leave town. We have been here so many times now and are never disappointed. One of the best camp sites.... enjoy campers!!!
Show more