We'll never know if Enid Blyton was much of a one for camping, but if she was, it's fair to say The Daggles would have been right up her street. This small, secluded family campsite on a working dairy farm rolls back the years, offering a wholesome blast of back-to-basics camping in idyllic surroundings on the edge of Dorset's Blackmore Vale. The name alone is hugely atmospheric — the camping field has been known as such since at least the early 1800s. It sits on Jess and Mark's Drummers Farm, which supplies the milk for farmhouse cheddar. The same family has farmed here for over a century and tradition extends to the site, which is resolutely off-grid, low-key, and small-scale.

There are only six to ten pitches for a start (depending on occupancy), ranged around the perimeter of a grassy, three-acre field. It's tents only, and you can't bring vehicles onto the site, which is a big sigh of relief for parents who don't have to worry about small children careering around the place. They'll love the unpacking in any case — done in wheelbarrows from the adjacent car parking area. There's enough space that you can pitch a couple of tents close to each other if you wish, so if the kids want an adventure or you're in a small family group, you can all stick together. There's no electric power, cold water only in the washing-up area, and drinking water from a standpipe, so we're talking a real yesteryear experience. Even so, it's not hair-shirt territory, by any means. The two modern, flushing loos and two hot-water showers are in new timber cabins; there is a phone signal, so the 21st century is allowed on to the site, and you can even arrange for supermarket deliveries.

The vibe is family campfire cookouts and barbecues, with rambles in the woods to see what you can see. There are ancient oaks and butterflies, den-building sites and picnic spots, and a circular woodland walk that you can wrestle a pushchair around. To mix it up, most families take at least a day out to head for the beach — about a 45-minute drive away — where extensive sands, clifftop walks and little old harbours make for an exciting adventure. Head back for marshmallows around the fire, and see who can hear the first owl. Famous Five, eat your heart out.

It's a tents-only site, with up to ten grass pitches around the perimeter of a three-acre field, with an adjacent private woodland. Parking is nearby but cars aren't allowed on the site itself at any time. It's also off-grid (ie, no power points) though there is a phone signal.

Each pitch has a designated campfire area — some with a firepit, some with stone circles — and logs and charcoal are available to buy on site. Barbecues are allowed too, provided they are raised off the ground. Drinking water is available from a standpipe, while washing-up facilities are cold water only, so bring a camping kettle if you want hot water. There's an ice block exchange offered — the blocks are dropped back to you once frozen. You can have a supermarket delivery to the site, by prior arrangement with the farm.

The bathroom facilities are custom built and brand new — two flushing toilets and two gas-powered hot showers. They are lit with solar lighting and open 24 hours a day.

The farm is in the village of Leigh, set in the heart of lovely rural countryside. With boots or bikes, you can set off straight from the site on all sorts of routes, from a pootle to the village and back to a ten-mile circuit up onto the Dorset Downs. Just ask at the farm, they'll be happy to point you in the right direction. You wouldn't want to come all this way and miss the Cerne Giant (01297 489481) — Britain's largest chalk giant figure, carved into the downs. It's only a 15-minute drive away and there are several walks you can do from there too.

For urban pleasures, it's a ten-minute drive to the historic town of Sherborne — look in the dictionary under the words 'quaint' and 'picturesque' — which has castle ruins to run around, an ancient abbey, honey-coloured buildings, and a whole host of cute shops, boutiques, delis, and galleries.

Otherwise, and especially with young kids, all roads lead to the coast, via the county town of Dorchester, another historic gem and the birthplace of Thomas Hardy — his cottage (01305 262366), by the way, is almost absurdly gorgeous and well worth a visit. It's about a 45-minute drive to the sea all told, where the Jurassic Coast and its beautiful sands await. The huge, golden beach at Weymouth is a great target, and you can either grab some fish and chips here or head to the historic harbour where there are cafes, bars, and boat-watching. Rainy day? The Sea Life Adventure Park (01305 761070) is your best bet, with otters, sharks, penguins, and turtles (not all in the same tank obviously, that would be mad), and an impressive day-and-night ocean tunnel. For more beaches, Studland and Lulworth are a bit more of a trek (about an hour in the car), but also well worth it for a day trip to experience some of England's finest bits of coast.

The nearest shop is in the village, Leigh, or you can arrange deliveries from supermarkets in Sherborne, which is a ten-minute drive away. There's a wonderful artisan bakery in nearby Alweston — Oxfords (01963 23214) — which is over a century old now and is where you pick up your sourdough and Dorset Lardy Cake. Alweston is about a 15-minute drive away, and you might as well check out The Elms Farmhouse Kitchen (01935 713372) while you're there, just outside Alweston in North Wootton — excellent homemade brunches, lunches, and cream teas.

For pubs, you're spoiled for choice – it's hard to find a duff one in this part of the world and there are plenty of really nice ones within a ten-minute drive of the site. The Chetnole Inn (01935 872337) is just a couple of miles west — a five-minute drive or a 45-minute country walk — with proper old bars, a nice garden, fresh seafood, and a good-value bistro menu. Five miles east, the Hunters Moon (01963 210966) at Middlemarsh is an 18th-century inn that's good for a pint in the garden and a bar meal — nothing fancy but freshly cooked. Or there's the really pretty, ancient, and thatched Rose and Crown (01963 210202), four miles north and right by the church in the charming village of Longburton — everything you want from an old English pub, from stone-flagged floors and open fires to local ales and good food.

The Daggles is a secluded family campsite on the edge of the Blackmore Vale in Dorset, it is perfect for families and small groups of friends. We are a working dairy farm and are in a very agricultural area, at busy times of the year there are more tractors than cars on our road! Read More

Up to ten pitches for tents only — family groups can be accommodated together with advance notice. Leigh village is accessible from either the A37 or the A352, and Drummers Farm is situated to the south of the village on Batcombe Road. The campsite is clearly signed from the road — the SatNav doesn't take you to the farm itself but to Batcombe Road, and all you need to do is keep driving until you see signs for The Daggles.
There are mainline train stations in Sherborne and Yeovil, but there's no public transport from either to anywhere near the site, so you would need to take a taxi.

We stayed at the campsite for one night in September 2021. Upon arrival we were greeted by Jess, Mark & Percy who showed us to our pitch. The drive way is a beautiful entrance to this rustic camp site. The short walk from the car park was made all the more enjoyable with the use of a wheelbarrow, which also meant that we could do it all in 1 trip! Our pitch was spacious with easy access to the facilities, we had the hedgerow to one side and the woodland belt behind us, it very much felt like we were in a Brambly Hedge book. The facilities are brand new and designed with families in mind, the shower was not only spacious, it is was better then the one we have at home! Our stay coincided with the local village’s pup up pub which we would also recommend. We slept peacefully and awoke with the sun rise and bird song. A lovely rural getaway in the beautiful Dorset countryside side. We can’t wait to come back next year with the bicycles!
Show more 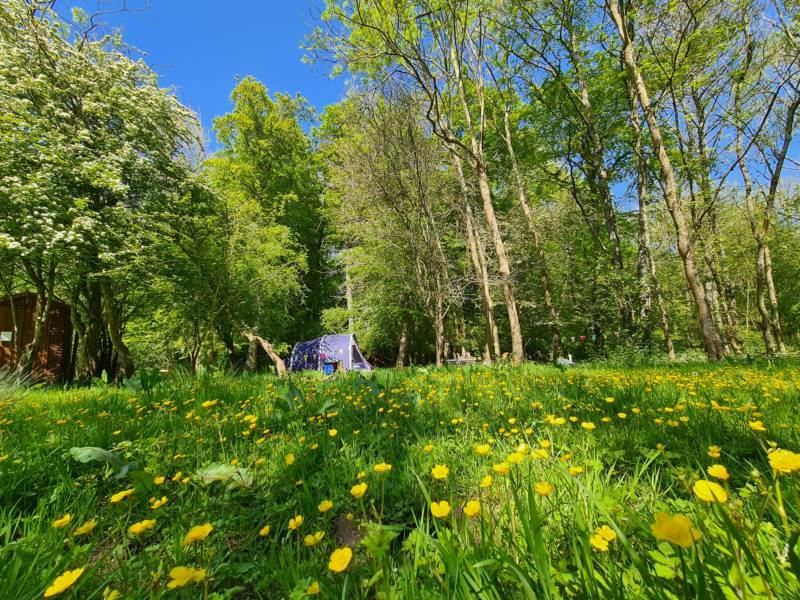 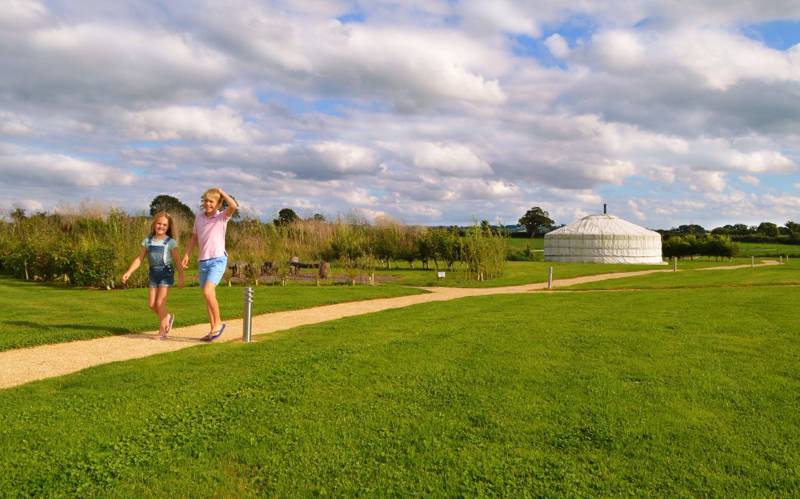 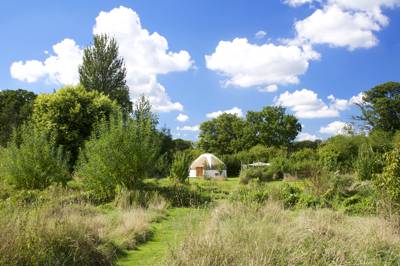 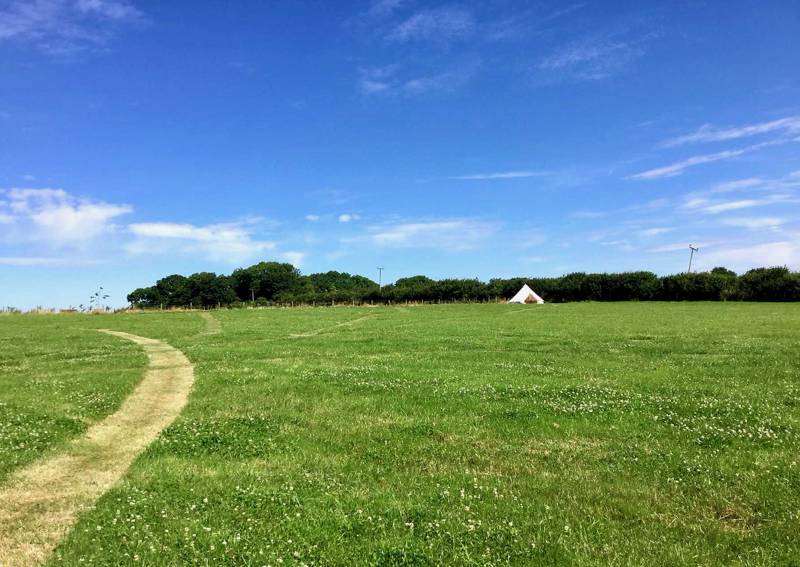