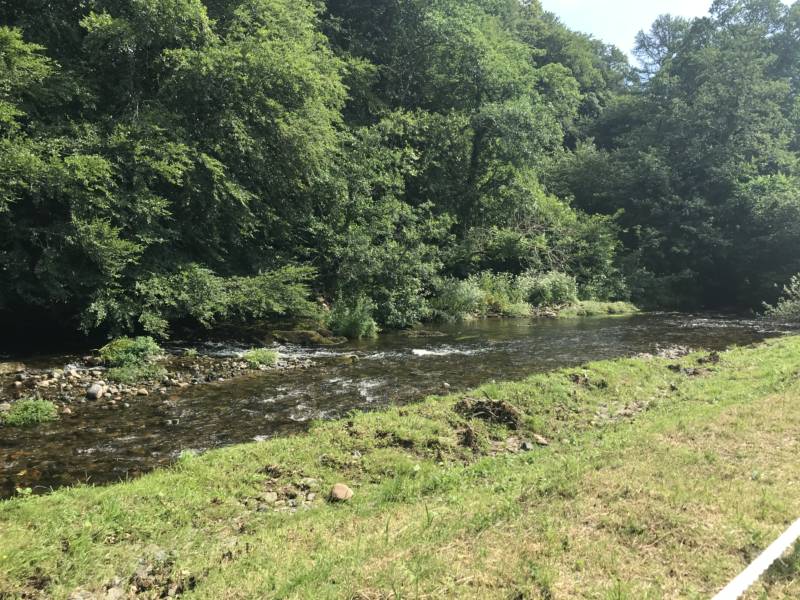 Coming off the A38 and driving towards Oakenham Bridge is a joyful experience. Travelling south, the dense and wild vegetation grows thicker and signals the moment you have started to follow the River Avon. Beech and sycamore branches reach out at the sides of the narrow road, hazel and hard fern jostle for space, and pines stretch in the background forming a quintessential English scene. One can sense the river, and suddenly the flora at the banks open up and allow a glimpse of it making its merry way with you. This is the entrance to South Devon’s Area of Outstanding Natural Beauty and it leads to a little ancient stone bridge covered in moss and ivy — blink and you’ll miss it. Cross it and you will find yourself in a perfect field for pitching a tent right beside the babbling river.

Located between Dartmoor National Park four miles to the north and the rugged bays and estuaries of the Devon coastline to the south, Oakenham Bridge Camping is a very back-to-basics affair. There’s a toilet and there’s a drinking water tap, both in a six-acre field overlooked by the patchwork rolling countryside and along the edges of the Avon. This is almost wild camping, so if you have no problem going down to the river to rinse your dishes or refresh yourself, then it’s a place that will suit you just fine. It’s peaceful, it has space, the field has lush grass to roll around on, and most importantly, its pitches are level.

It would be quite easy to stay and look out for deer and foxes all day long, given that it has that lazy appeal; but going out and about, even if it’s in a meandering kind of way, one should follow the river and let it lead them to discover more. For adventurers and explorers, tracking the river on foot north instead of walking the road would lead to the village of Avonwick 30 minutes away and a well-deserved drink at The Avon Inn. From here it’s a short walk to the Avon Cobbly Walk, a short section of ancient cobbled lane between the Old Toll House at Avonwick Bridge to the medieval Horsebrook Bridge — everything is covered in lichen, moss, and ivy, giving the sense of another time and place. Jump in the car, and you can be on Dartmoor in ten minutes or, like the Avon itself, you could head south to the beaches and to the sea, where the stream meets the tide.

Very basic onsite facilities with one Portaloo, one drinking water tap, and recycling facilities. The camping field is bordered on one side by the river Avon and can be used to rinse dishes. There is a swing on an old oak tree. Campfires are permitted if they are off the ground. Young children must be supervised at all times.

Other than discovering the immediate vicinity on foot, there's no better way to take in the wider area than to step aboard the Dartmouth Steam Railway and River Boat Company (01803 555872). There are plenty of options but the Round Robin, which takes in the towns of Totnes, Paignton, and Dartmouth by steam train, riverboat, and bus is by far the most popular. The itinerary, including the starting point, can be customised to suit the customer's preferences. Totnes is just over 15 minutes away by car and if you'd prefer to get the hiking boots on and take in some of the county at a slower pace, then the Totnes Torbay Trail (or 3Ts) is a must. Not only does it offer beautiful country vistas across the Devon hills but also includes 15th-century Berry Pomeroy Castle (01803 866618) and Manscombe Woods with its lakes and manicured gardens. For families with younger children, Pennywell Farm Activity Centre (01364 642023) featuring bottle feeding, ferret and pig racing, goat walking, pond dipping, and egg collecting among other things is only 15 minutes away and Dartmoor Zoo (01752 837645) is only 20 minutes away. The nearest beaches are Paignton Beach and Blackpool Sands, both about 30 minutes by car.

The Avon Inn (01364 73475), the closest pub to Oakenham Bridge Camping, serves good local food and does a special pizza and paella night on Fridays. Just a mile further north on the same road is the Turtley Corn Mill (01364 646100) which also has local beer and food on the menu, the walls are adorned with old pictures of the local area and peacocks roam the grounds. Totnes is the place to go for a wide selection of dining options. Bianca E Massimo (01803 411700) is a highly-rated tiny organic, vegan, and gluten-free restaurant. Pie Street (01803 868674) is a cafe, bar, and restaurant that specialise in  — you guessed it — pies. Choose your filling from the menu, eat in or take away. Or you could try The Wild Fig Deli and Cafe (01803 864829) who serves homemade sandwiches, cakes, snacks, and good coffee.

Oakenhambridge Camping is a peaceful site on the banks of the river Avon, just outside the village of Diptford up at the northern end of the South Devon Area of Outstanding Natural Beauty. Great if you want lots of space. and to spot the local wildlife. The postcode for Oakenham Bridge Camping is TQ9 7LX. Leave the A38 at the Marley Head junction and take the South Brent exit from the roundabout. Head through South Brent and follow the signs to Avonwick. Go past The Avon Inn on the left, over the bridge, and take the right turn signposted Diptford. Continue for about one mile to Oakenham Bridge on the right-hand side. Go over the bridge to enter the field. The closest train station to Oakenham Bridge is Totnes. From there it's possible to catch the 91 bus from Stop C to The Avon Inn in Avonwick. It's a 30 minute walk to the campsite or a taxi can be ordered from the pub.

Myself, my partner and our dog stayed here for 2nights alongside the river Avon. We had an amazing, peaceful, chilled out weekend and also walked to the local pub Avon Inn. It was only a half hour walk, plenty of space in the gardens plus the food was very good. We will definitely be coming again. 🙂
★★★★★

I almost don't want to leave a review because I wouldn't like to see the site spoiled by loads of visitors. But I feel thats not fair... a really great spot in the rolling fields, beautiful babbling, clear shallow river along the side, sunset over the hill and so quiet. Owls hooting in the night and birds of prey circling overhead, bats at dusk and little frogs in the grass. It really was great, if you love a more wild camping experience with peace and quiet and a simple experience then this site is great. I had the whole site to myself (and my dog) on the Tuesday morning which was lovely! The site owners stopped by a couple of times to check in and say hi, which was nice. From here we drove into Dartmoor NP a couple of times, had some beautiful walks on the Dart, visited some amazing tors and drove to Totnes and got the steam railway round robin through dartmouth and Kingswear which was just beautiful. Overall a really special experience exploring south Devon for 5 days and a great campsite. I hope it stays a well kept secret for campers like me! Thank you
★★★★★

what a great spot.

hills to walk, river to paddle in and the view of the night sky was absolutely spectacular. the ability to have a camp fire is always a bonus.
★★★★★

On arrival we felt the workday worries fall off us. Oakenham bridge is serene, beautiful, quiet, rustic and to top it off has a lovely river to take a dip in, a great way to wake up ! The toilet, despite being housed in a portaloo, is a fully flushing ceramic toilet with a sink and as the field is by the water bring citronella candles for twilight. Also a great base to explore nearby surroundings either by car or if you're a runner too, some nice road routes. Cant wait to go back.

Thanks Ben - glad you enjoyed your stay!
Show more Plymouth, Devon, South West England
The Old Longhouse, Plymouth, Devon PL7 5JT
Geodesic glamping domes with a ceiling that lets you stargaze and a dark-sky setting on the edge of Dartmoor 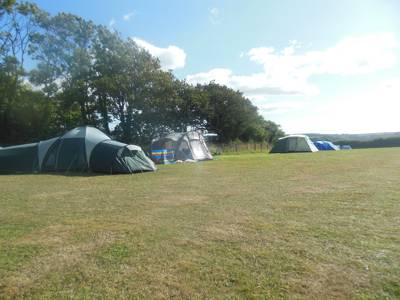 Kingsbridge, Devon, South West England
Pittaford Farm, Kingsbridge, Devon TQ7 2QG
A campfire-friendly site in South Devon, with a beach, a nature reserve and a pub all less than 45 minutes' walk away