If the River Thames is a song, whose sedate opening bars of its Kemble source belie its climactic, rousing sing-along chorus in the City, before its fade-outro into the expanse of the Canvey estuary and beyond, the Henley/Marlow stretch is the delicate, melodious first verse. For it is here that the river enjoys a slower pace of life. Pleasure boats abound, ensconced on either side by heavy, green willows shielding picturesque Berkshire villages. And along this tranquil stretch of one of the world's great rivers, sits Hurley Riverside Park.

At first glance, Hurley Riverside Park might seem like the kind of commercial touring park you would not normally expect to see recommended by Cool Camping. It's a huge 200-pitch site with a high percentage of caravans, large motorhomes and static holiday homes. Hedges are neatly trimmed, pitches are clearly marked and an automatic barrier needs to be negotiated on entry and exit which, for some, may feel more 'airport car park' than 'back-to-basics campsite'. But get over it, people, because this is the gateway to a Thames-side camping paradise.

With direct access to the Thames, it really is all about the river. You could either arrive by canoe/boat and camp, or you could bring a boat along if arriving by car, and use the campsite's own slipway to launch. Or better still, make a raft out of some plastic water bottles and string! (You'll obviously need someone to video it all for You've Been Framed.)

It must be said, the tent pitches themselves are not by the river, but set back behind tall hedges in a separate camping space. The area between the river and the pitches is the riverside picnic grounds, a long, semi-wild meadow, perfect for playing games, running around, eating al fresco and choosing which of the passing boats you would choose if you won the lottery. It's a special spot indeed, with the lush green countryside of the Thames Valley all around, red kites circling above, and the river traffic gliding by. And, unbelievably, all barely an hour from central London.

The park has been run by four generations of the same family for the last 40 years, prior to which it was one of the region's loveliest working farms. This rural heritage and family-friendly atmosphere is plainly in evidence today with the resident llamas and pygmy goats. The park also boasts accolades aplenty, including the prestigious David Bellamy Gold Award for Conservation, for the last 15 years. Hurley even has it's own guided nature trail which follows the length of the campsite.

With canoeing, kayaking, fishing and a whole host of other waterbound activities to enjoy all just an easily-reachable drive from the capital, Hurley Riverside Park is a fantastic base for campers fleeing the frenzy of urban living. It's also a short distance from regal Windsor, the attractive riverside market town of Henley-on-Thames, and further afield, the dreaming spires of Oxford, so there's no shortage of great day trips to be enjoyed. Whether or not you'll get to these places on your home-made raft, however, is anyone's guess.

The Thames Path and the Chilterns Cycleway are two of the best ways to explore the surrounding area. Legoland (0871 222 2001) in historic Windsor is just 11 miles away. Hurley offers discounts for the park as well as 25 other local attractions (be sure to ask for details when booking). Well-heeled Henley-on-Thames, famous for its annual regatta, is just down river (the light-hearted alternative Hurley Regatta takes place every August). Further afield lies famed Oxford and the quintessentially English Cotswolds. If you get the chance, make the half-hour drive to spot the red kites from Watlington Hill. The views over the Chilterns Area of Outstanding Natural Beauty are breathtaking.

The area is something of a culinary hotspot. The Red Lyon (01628 823558) serves up an imaginative, locally-sourced menu at reasonable prices. Its beautiful garden is perfect for lazy, al fresco dining. The award-winning Olde Belle (01628 825 881) boasts elegantly rustic cuisine, including hearty favourites like braised belly of Dingley Dell pork. For something extra special (with prices to match), make the trip to The Hand & Flowers (01628 482 277) in nearby Marlow – the UK's only Michelin-starred pub. The gastronomic guv'nor round these parts though is Heston Blumenthal's Fat Duck (01628 580 333) in Bray. Booking well in advance is essential for both.

From the M4: Leave the M4 at Junction 8/9 (Maidenhead). Take the A404(M) towards High Wycombe and Henley. Turn off the A404(M) at the third junction onto the A4130 signposted Henley. At the top of the slip road turn left and go straight across the Burchetts Green roundabout and up the hill. Continue forwards and down the hill, following the brown caravan park signsignoring the turning into Hurley Village. Turn right ¾ mile past the turning for Hurley Village into Shepherds Lane. At the sharp right hand bend go straight on through the wood. At the crossroads proceed straight across into the touring park reporting to the warden at reception.

From the M40: Leave the M40 at Junction 4 and take the A404(M) towards Maidenhead and Reading. Turn off the A404(M) at the third junction onto the A4130 signposted Henley. Turn right at the Burchetts Green roundabout and proceed as above towards Hurley.

The 239 bus from Henley-on-Thames or Maidenhead stops outside the park.

It is big site but because all the campsites are broken up into lots of smaller fields with lots of nice hedges and mature trees and big spaces in the middle of each field it doesn't feel like you are squashed into a massive car park. It's nice to have a mix of tents, campers and and caravans. Lots of kids bombing around on their bikes on the weekend, bit like the start of ET, but everyone was having a nice time and there was a really nice atmosphere and the staff were very welcoming and it was clear that many of the visitors there go there a lot. The site fell silent after all the kids were in bed about 10pm. The only thing I can think of that would improve things onsite is that the park could do with some swings for the under 5's to play on. Bit of aircraft noise on one night and some very chatty Tawney owls. The facilities were spotless and the "family shower" (With lots of space, a loo and a variable temperature shower in the same cubicle) was a really well thought out idea. You were never far from a tap, loo or a shower wherever you were on the site and there was always lots of hot water. We enjoyed the riverside picnic grounds despite some guy taking on the self appointed role of picnic ground warden and chasing off other members of the public who weren't staying on the park. I don't think he had anything to do with the park but it spoiled the atmosphere watching other poor families being badgered into packing up their picnics on what essentially seemed to be public land. We had a lovely time and a nice day out in Henley too! Hopefully will be back next year with our rowing boat to use the small slipway on the park too :-)
Show more

See Campsites in the Chiltern Hills

See Glamping in the Chiltern Hills 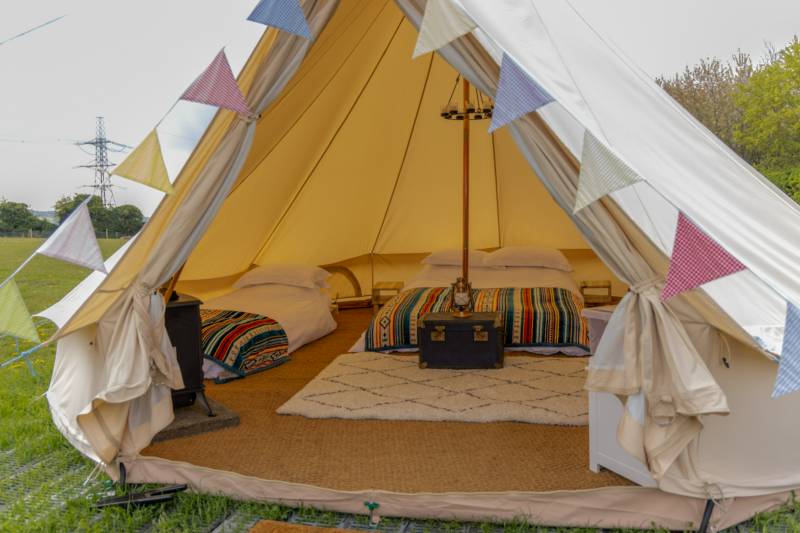 Luxury farm glamping with epic views, a 10-minute walk from the Thames 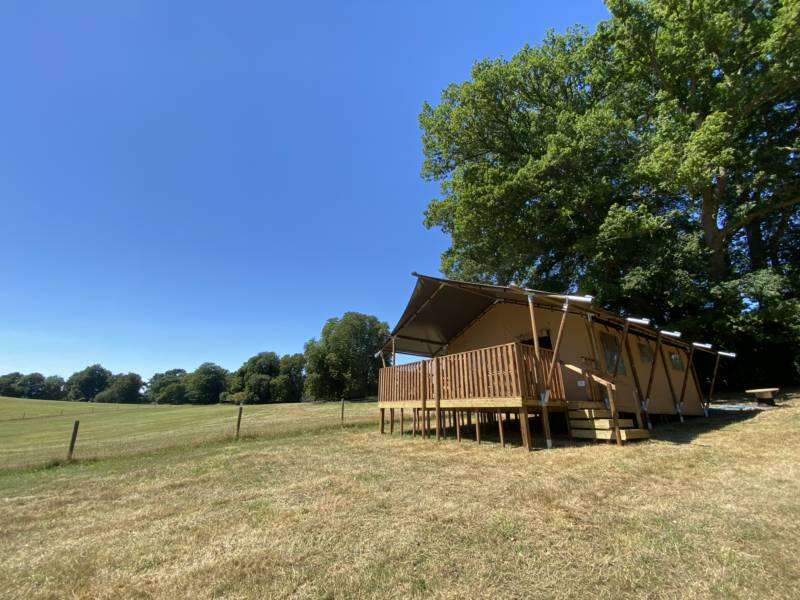 A single, self-contained safari tent with its own acre of land on the edge of the Chiltern Hills