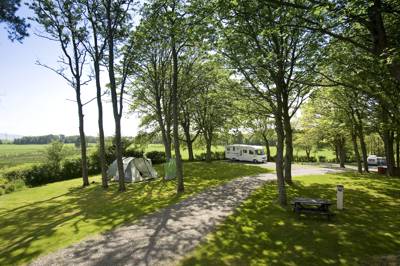 Six acres of woodlands and only 500 meters from the seafront

With no less than 16 beautiful lakes squeezed between England’s tallest mountains across a mere 30-odd miles, The Lake District is Britain’s most hyped scenic area, and with good reason.Its landscape of tranquil water, impressive valleys and charming stone-built villages have been drawing artists, writers and lovers of the outdoors for centuries. Recently crowned a UNESCO World Heritage Site, there’s unlikely to be any let-up in its popularity any time soon; so thank good there are plenty of excellent campsites on hand.

Set on the outskirts of Ravenglass, a pretty Roman fishing village on the Lake District’s west coast, this Camping and Caravanning Club Site combines modern facilities with old-school camping principals. The world’s oldest camping club have taken care in creating a site where the facilities – a modern shower block and a well-stocked shop – don’t come at the expense of its natural surroundings. And what surroundings! With six acres of mature woodland lying just 500m from the dramatic Cumbrian coast, this unique destination is a walker’s paradise.

And who’s welcome? Well, everyone really. Ravenglass accommodates up to 75 caravans, motorhomes and canvas campers. In fact traditional tenters shouldn’t be put off by the amount of caravans allowed; the camping area is situated in a peaceful, tree-lined section of the site. Also, located in another wooded area (en route to the main field) there are three camping pods – cosy alternatives made from locally-sourced timber and insulated with wool – along with a couple of new, pre-pitched and furnished safari tents, well suited to families who don’t want to over-fill the car with camping clobber.

Given a few days you could easily see most of the Lake District’s most popular attractions. You could try a circuit taking in the towns of Windermere, Ambleside and Bowness, Wordsworth’s Dove Cottage in Grasmere, and the dramatic northern scenery of Keswick and Ullswater, although to be honest some of the best scenery is right on your doorstep – in the breathtaking valleys of Eskdale and Langdale. The estuary village of Ravenglass is also the access point for the open-to-the-elements Ravenglass & Eskdale Railway, without doubt one of the most scenic narrow-guage railway routes in the country and one of the oldest too. Puffing its way inland for around seven miles, through spectacular valleys, it’s a great route further into the National Park.

The local coastline is perhaps the very best place to start any weekend’s exploring, however.While the vast space of the Lake District allows anyone to walk, explore and revel in the views without worrying about their busy lives, it is here, in it’s western-most corner, that arguably the quietest, most undiscovered (and under-rated) aspects of the National Park are found. From the wildlife that flourishes in the estuary to the peaceful picnic benches overlooking the silt and sand Ravenglass Beach, there are few finer places to enjoy both mountains and sea in one fell swoop.

The site sits on the edge of the picturesque village of Ravenglass and is just a short stroll along a wooded lane from the sea shore. Ravenglass is the only coastal village in the Lake District National Park, and stands at the meeting point of three rivers flowing from the Lakeland’s most majestic fells. The village and surrounding area is steeped in history and was once a Roman port – the remains of a Roman bath house are down the lane from the campsite. The Hadrian's Cycle Way starts at Ravenglass and the Cumbria Coastal Way passes right by the campsite. The local area boasts England’s highest mountain, deepest lake and smallest church, with ‘Britain’s favourite view’ at Wastwater and Scafell Pike a short drive away. The Eskdale Valley stretches from the west coast through to the foot of Hardknot Pass and you can take a trip on the Ravenglass & Eskdale Railway; narrow gauge railway through this stunning valley.

The licensed, on-site shop sells local meat from Wilson's Butchers (01946 820036) and locally-brewed beers. There are 3 pubs in Ravenglass (all within walking distance). The Ratty Arms (01229 717676) offers a range of dishes for the weight-conscious, and an extensive selection of tasty pub grub for the not-so-weight-conscious. This family friendly pub hosts a weekly quiz and frequent music events.

Nestled in six glorious acres of mature woodland, enjoy the Lake District from Ravenglass Camping and Caravanning Club Site, welcoming all types of units including caravans, motorhomes, trailer tents and tents to its site.  The spacious hard standings available for caravans and motorhomes, make pitching easy whilst the tranquil and remote setting of the site is the ideal spot for tenters. For those who wish to discover camping with a difference, the site is also home to three luxury wooden camping pods each offering comfort, warmth and a real unique camping experience. Keen cyclists will relish the opportunity to discover the many varied cycle routes available nearby, including, Hadrian’s Cycle Way which is located a short distance from the site at the Roman bathhouse.  Coastal, woodland and fell walks prove popular and the well-known Scafell Pike is only a short drive away. One of the Lake Districts most beautiful valleys can also be discovered by travelling on La'al Ratty, the famous narrow gauge railway, running from Ravenglass to Eskdale. The campsite prides itself on its stunning location and first class amenities available on site, including the modern toilet and shower facilities and well stocked shop. A choice of pubs can be found within walking distance of the site in the pretty village of Ravenglass and cycle hire is also available. Just down the lane opposite the site is a children's playground and ball game field, perfect for outdoor family fun.

Directions from the South: leave M6 at South Lakes turn off (A590). At the roundabout take the first exit to Barrow on to the A590 for 20 miles. Turn right at the A5092 to Whitehaven and Workington for 30 miles (this road becomes the A595). Turn left towards Ravenglass and the site is well signposted to the left.

Directions from the North: leave M6 at junction 40. Follow the A66 west to Workington for 34 miles. Take the A595 to Whitehaven and drive past Whitehaven, Egremont and Gosforth for 25 miles. Turn right towards Ravenglass and the site is well signposted to the left.