At the northern end of Ullswater, the pretty waterside village of Pooley Bridge is an ideal focal point for any camping holiday in the Lake District. Though the bridge from which the village took its name was washed away in 2015, a new reconstruction now takes its place, leading you to the riverside pub, rows of historic houses and the old church. Catch the Ullswater Steamer to cruise the lake, hike along High Street ridge, above the eastern shore and discover places that inspired Wordsworth’s most famous poems. We’ve sought out the best campsites in Pooley Bridge and around Ullswater from The Quiet Site to Lanefoot Farm so whatever your plans you’re sure to find a camping or glamping site to suit you. 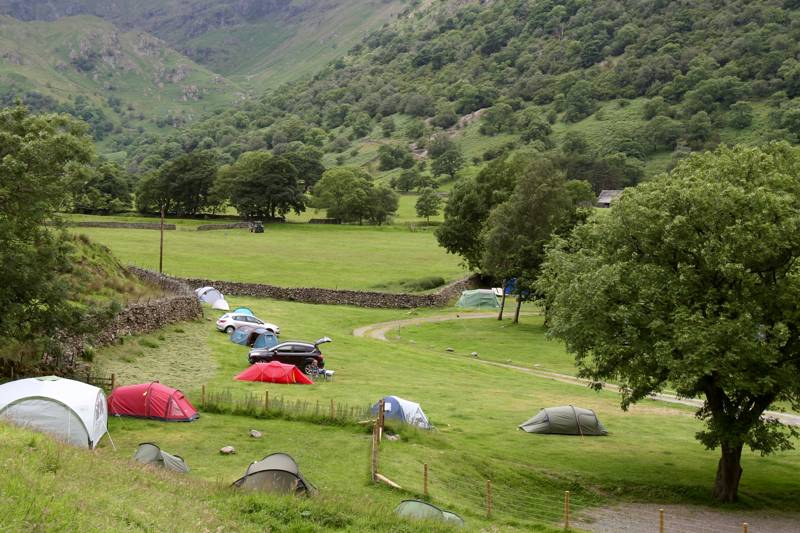 Camping and glamping in Pooley Bridge

Pooley Bridge is a great place to pitch up for a Lake District camping or glamping holiday. It’s one of a cluster of pretty villages on the shores of Ullswater, the Lake District National Park’s second largest lake. Situated at the northern end of the lake it may not be in the shadow of Helvellyn like Glenridding on the south side but it sure does offer great views of it. With roots as a 16th century fishing village, Pooley Bridge was named for the bridge over the River Eamont that was sadly lost to floods in 2015. Replacement in situ, its historic buildings and age-old inns continue to attract visitors. The Cool Camping team have given the thumbs up to campsites in the area where you can simply sit back and enjoy the lakeside scenery or make the most of the area’s attractions like The Quiet Site. We’ve also sought out glamping sites all over the Lake District, Pooley Bridge, included for those who don’t fancy the faff off pitching their own tent. Choose from shepherds’ huts at Scales Plantation Glamping, eco pods and cabins or Gypsy Caravans at Wanderlusts for a little extra comfort with your camping.

Things to do in Pooley Bridge

If you’re in the Lake District for fell walking, cycling or running, Pooley Bridge offers a great base. There are footpaths heading off in all directions, not least the Ullswater Way – which offers a 21-mile circumnavigation of the lake. But if you don’t fancy taking on the whole route, you can take to the water on one of the historic Ullswater Steamers which serve Pooley Bridge, Glenridding and a host of other Ullswater destinations. Not far from Pooley Bridge is Dalemain, a historic house with a five-acre garden which is known, in certain circles, for its award-winning marmalade.

If you’re staying in the area in spring, a visit to Glencoyne Bay on the west shore of Ullswater is almost obligatory. It was the nodding and dancing flowers here that inspired William Wordsworth to pen his most famous poem, Daffodils. A little further north is Aira Force, a 65ft waterfall with a National Trust tearoom and nature trails through woodland glades. You can also take to Ullswater under your own steam with Canadian canoes and rowing boats available to hire near Pooley Bridge, and kayaks and sailing boats at Glenridding. It’s from this village that many people set out to conquer Helvellyn too, one of the Lake District’s highest peaks at 950 metres. And then there's the rest of the Lake District to explore! It's England's largest National Park and has been a UNESCO World Heritage site since 2017 - trust us you won't be short of things to do whilst camping in Pooley Bridge. For more information on walks and attractions in Pooley Bridge and the Ullswater area, visit the Lake District National Park website.